NBA Stars Then and Now: What Did Famous Hoopsters Look Like as Kids?

Zarouhi Mikaelian
NBA Stars Then and Now: What Did Famous Hoopsters Look Like as Kids? July 25, 2018 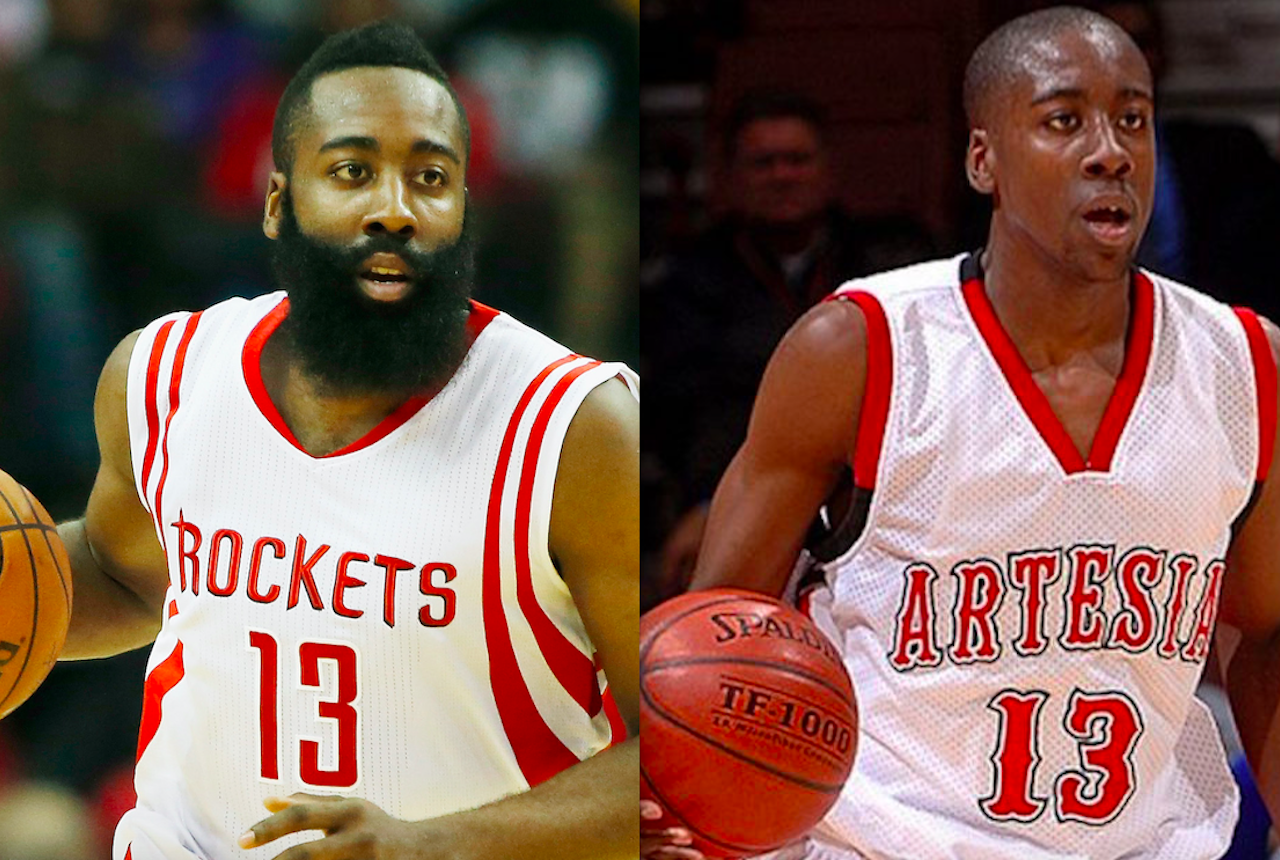 Michael Jordan and Charles Barkley weren't even 6 feet tall when they kicked off their respective high-school basketball careers. Anthony Davis started his as a 6-foot guard, and his team went 8-15 his junior season. Larry Bird was 6 feet, 1 inch tall as a high-school freshman. And they had to talk him into pursuing a basketball career. Young James Harden never averaged more than 20 points per game in high school. Victor Oladipo averaged just 11.9 points per game his senior year. All that is to say a lot can happen in high school. So are you worried you or your offspring might not have a future in the NBA? Perhaps this accounting of NBA stars past and present in their younger days will offer some encouragement.

The big man led Helix High School to consecutive California Interscholastic Federation titles and a 49-game winning streak. "I was a skinny, scrawny guy," Walton recalled to ESPN. "I stuttered horrendously, couldn't speak at all. I was a very shy, reserved player and a very shy, reserved person. I found a safe place in life in basketball."

Earvin Johnson earned the name Magic when he was 15 years old; he dropped a triple-double of 36 points, 18 rebounds, and 16 assists as a sophomore at Everett High School in Michigan. In his senior season, he led the squad to a 27-1 record, culminating in an overtime win in the state championship game.

As a sophomore, Irving led Montclair Kimberley Academy to its first New Jersey Prep 'B' state title. A year later, he transferred to New Jersey's St. Patrick High School and took them to the New Jersey Tournament of Champions title. I'm going out on a limb here, but he probably failed geography.

Larry Legend was just 6'1" as a freshman, but shot up to 6'8" by his senior year, when he averaged 31 points, 21 rebounds, and four assists for Springs Valley High School in Indiana. Still, he had to be convinced by a pair of Indiana State University assistant coaches to pursue college basketball. "I thought I might do construction work. It's hard work. It's tough work. But I like that. I always figured if things didn't work out, I'd go into construction," Bird said in 2015. "Thank God that didn't happen."

Anthony Davis was a complete unknown in high school, just six feet tall as a freshman guard, playing for Perspectives Charter School, not known for its athletics. By the end of his junior season, he was 6'8", but his team went 8-15. By his senior season, he was the top recruit in the nation.

MJ was famously cut from the Emsley A. Laney High School varsity team as a 5'11" sophomore. Then he hit a growth spurt and worked like a maniac to become a star on the team a year later. As a senior, Jordan averaged a triple-double and was named a McDonald's High School All-American.

In two years at Robert G. Cole High School in San Antonio, Shaq led the Cougars to a 68-1 record and the 1989 state championship. His 791 rebounds that season remain a state record. "His warm-up pants didn't fit at all," said the team's scorekeeper, Joy Davenport. "If he wore them around his waist like he was supposed to, they came up past his calves. If he tried to pull them down, the waist band was around his (uniform shorts) thighs. Every time he went in for a layup, his warm-up pants came off."

Curry was obviously good enough to play varsity ball when he was a freshman, but Charlotte Christian School coach Shonn Brown had other plans. “We wanted him to run the JV so that going into the next year, he would be ready,’’ Brown said. “It would make the transition easier, so he could develop the confidence to lead the group. ... We talked a lot about the legacy he would leave for Charlotte Christian. We talked about what it was like to be a man. We call it salvation and sacrifice. Now you look at how he sacrifices for the Warriors, how he manages his home life." Curry responded by leading the varsity to three conference titles in three years.

This is a shot of Klay Thompson on the bench during the CIF-Southern Section Division III-AA final. His team got crushed 77-44 by James Harden and Artesia of Lakewood, California. "I was a role player. I was a sophomore on varsity. I was the sixth man. I came off the bench, knocked down some open 3s and played fundamental ball. That was my role," Thompson said, according to the OC Register. "It wasn't that long ago."

Harden not only led Artesia to a state championship over Klay Thompson's team as a junior in 2006, the squad repeated during his senior season a year later. The team went 66-3 over his last two seasons, and the beardless Harden was named a McDonald's All-American after his senior year.

Back when he was Lew Alcindor, he led Power Memorial HThigh School to three consecutive New York City Catholic championships, a 71-game winning streak, and a 79–2 mark overall. The team won the national championship when he was a junior, then fell just short a year later. All this despite an ignorant coach, who, Abdul-Jabbar revealed in 2017, called him the N-word.

While Jordan had to wait until his junior year to play varsity basketball, Barkley did him one better (or worse?), failing to make the Leeds High School varsity team as a 5'10" junior. He grew six inches before his senior season, when he made the team and averaged 19.1 points and 17.9 rebounds per game. Still, he wasn't heavily recruited until he dropped 26 points on Bobby Lee Hurt, the best recruit in Alabama, in the state semifinals.

Hall of Fame coach Red Auerbach met Chamberlain when the center was still in high school, and had him play the University of Kansas' B.H. Born, the MVP of the 1953 NCAA Finals. Chamberlain won 25-10, and Born was so dejected that he gave up on basketball. "If there were high school kids that good, I figured I wasn't going to make it to the pros," Born said.

In 2000, James averaged 18 points and six rebounds per game, leading St. Vincent-St. Mary of Akron, Ohio, to a 27-0 record and the Division III state title. He was just a freshman. The following season, he became the first sophomore ever chosen for USA Today All-USA First Team. As a senior, James averaged 31.6 points, 9.6 rebounds, 4.6 assists, and 3.4 steals, leading the squad to its third state championship in four years and a national title.

KAT reclassified in high school, so he played just three seasons of ball at the level — and he carried his St. Joseph High School in New Jersey to three state titles. The 2014 Gatorade Player of the Year and future No. 1 overall pick posted two quadruple-doubles in his high school career.

Simmons moved from his native Australia to the United States during his sophomore season to play for Montverde Academy in Florida. The team claimed the High School National Tournament title in all three of his seasons. The future No. 1 overall pick was named the 2015 Gatorade National Player of the Year.

Oladipo balled for DeMatha High School in Hyattsville, Maryland, but he didn't put up the kind of numbers you'd expect. As a senior, he averaged 11.9 points, 10.3 rebounds, and 3.6 blocks per game. He was mostly regarded as a three-star recruit, ranked the No. 144 overall prospect of the 2010 class by Rivals.com.

Tatum played for Chaminade College Preparatory School in St. Louis, Missouri. As a senior in 2016, he averaged 29.6 points and 9.1 rebounds per game to lead the squad to the Missouri Class 5A state title. The future No. 3 overall pick was named the 2016 Gatorade National Player of the Year.

Before he became a key part to six NBA championship teams, Pippen lived in Hamburg, Arkansas, where he was the youngest of 12 children. At 6'1", he wasn't offered any college scholarships. So he took his talents to the University of Central Arkansas as a walk-on, where he experienced a growth spurt that shot him up to 6'8".

The supreme dunker was a four-year starter for the varsity team at Archbishop Mitty High School in San Jose, California, leading the team to consecutive Division II state basketball championships in his sophomore and junior seasons. The team lost in the state championship game a year later. Gordon was named the MVP of the 2013 McDonald's All-American game.