Badass Actors Who Got Completely Ripped For Movie Roles 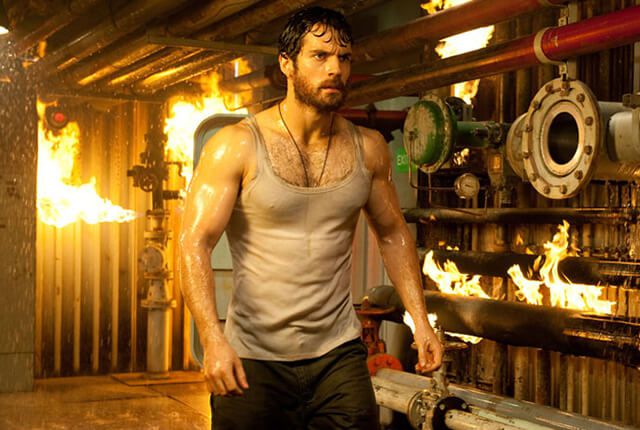 Most actors would do anything for a role. Just ask Christian Bale, who gained weight to play Dick Cheney in the biopic "Backseat." Or Jared Leto, who lost 30 pounds for "Dallas Buyers Club." But the actors on this list did just gain or lose weight. These actors who got ripped for movie roles trained like they'd never trained before in their cozy lives. And some of them became almost unrecognizable. Almost.

Henry Cavill in Man of Steel

When you play Superman, you have to look the part. So, Henry Cavill enlisted the help of Mark Twight, founder of Gym Jones, and the man who created the 300-rep Spartan Workout that Gerard Butler used in "300".

For the rebooted sci-fi film, Beckinsale ate portion-controlled meals, which were complemented with exercise. With the help of her personal trainer, Ramona Braganza, she logged in hours three to five times a week. She also did yoga as well as Braganza's 321 training methods. Badass!

Mark Wahlberg everything he's in

Wahlberg trained five days a week by doing squats, lunges, and benching. Eventually, this brought him to a weight of 212 pounds of pure muscle, which made him look just as ripped as his co-star, Dwayne "The Rock" Johnson. Not too shabby!

Pratt had one sick workout routine for his role as a Navy SEAL for "Zero Dark Thirty". And boy do we mean sick! He did 500 pushups and ran five miles a day, while also hitting the gym. He suffered some injuries along the way and managed to make himself sick…but hey! Look at him. C’mon.

Ryan Reynolds in a bunch of superhero flicks

Reynolds always had a cute face, but cute wouldn't cut it for his role in "Blade: Trinity," so he hit the gym and gained 25 pounds of muscle for the role. This obviously helped to keep him in shape for his future superhero roles as Green Lantern and Deadpool, for which he was also bulky as f---.

Jason Statham in The Transporter

By spending more time at the gym and learning mixed martial arts, Statham didn't just look as ripped as a God by the time he took on the role of Frank Martin, a living weapon in "The Transporter". He was also strong enough to do his own stunts. On-freaking-point!

To get into the unforgiving catsuit that her character, Catwoman wore, she had to embrace a vegetarian diet, and go to the gym and work out like never before in her life. She also took up Bikram yoga, which consists of 26 postures in a room heated at 108 F for 90 minutes.

Joe already looked good in "One Tree Hill," and was already looking more buff when he joined "True Blood". But for his role on "Magic Mike," he not only worked his shoulders, biceps, and triceps, but he restricted his diet to oatmeal, chicken, and fish.

Ever wondered how Brad Pitt got those abs that made you queef in your seat while watching "Fight Club"? Brad not only went on a strict diet, but also endured a 5-day workout that targeted specific muscles per day. We can definitely see Brad’s dedication in every inch of his body. EVERY. INCH.

While working on another film, Marvel sent a trainer from London to help beef up Evans. Together, they did three hours of weight training a day, and it was brutal. And we're sure he wishes he could forget sticking to bland food like rice. Yuk!

The key to Jolie's impressive abilities as "Lara Croft" involved compound movement exercises like squats and lunges, as well as using Stability balls, and resistance bands during her 2-hour long workouts six days a week. She also ran... a lot!

You can thank Simon Waterson, an ex-Royal Marine-turned trainer for turning Daniel Craig into the kind of guy who looks so hot in swim trunks at the beach. Using compound exercises and power lifting, Craig became the sexiest Bond yet.

Former Navy SEAL Duffy Gaver, who is now a personal trainer, turned Chris Hemsworth into the God of Thunder, complete with a chiseled torso, and arms that can pack a stronger punch than Thor's hammer.

Bale has proven he'd do anything for a movie role, and thankfully for us, his smoking-hot body's been strong enough to take it. Like that time when he used resistance and core training, along with some plyometrics to look like a kickass Dark Knight that could squash anything that got in his way.

Hugh Jackman in The Wolverine

It seems like Hugh Jackman has been getting bulkier and sexier with each "X-Men" film. But you can thank personal trainer David Kingsbury, who helped the actor bulk up in between roles, almost to the point of exhaustion.

Gyllenhaal looked real hot in "Brokeback Mountain". But for his role as U.S. Marine Anthony Swafford in "Jarhead," he had to endure some intense cardio, some cycling, swimming, running, and weightlifting to pack on 25 pounds of muscles. But clearly, it paid off.

To become a Marvel superhero, Rudd went cold turkey on carbs and alcohol for a whole year. He also did intense workouts and in his own words, "eliminated anything fun for a year" in order to get to play a superhero.

Ludwig looked puny in "The Seeker," but at 22, he worked out, and bulked up for "The Hunger Games". We're guessing he loved the way he looked so much because gained even more muscle mass by the time he starred in the war movie "Lone Survivor".

Will Smith in Ali

Not every actor can take on the role of a lifetime, so when Smith got the role of one of the best fighters in boxing history, he worked with trainer Darrell Foster, who's been a fitness and boxing coach for almost 20 years, to get into shape before getting in the ring.

Nick Jonas in Careful What You Wish For

When former Jonas Brothers band member, Nick Jonas dipped his toes into the Hollywood pool, he buffed up with an intense fitness routine that got him in great shape for several films, including "Goat", and the upcoming "Jumanji" sequel.

Brody, who was often lanky, gained 25 pounds of pure muscle, by cutting off sugar and alcohol, and sticking to a 6-day-a-week workout from hell. He also gave up sex, which allegedly wrecked his relationship. But, in the end, it paid off.

Jamie Foxx in Any Given Sunday

Foxx lifted as much weights as possible until he weighed 200lbs, but dropped 20lbs while undergoing football drill training for his role as a football player in the 1999 film. It obviously paid off because Foxx ended up looking hot and winning an Oscar for his role.

Mickey Rourke in The Wrestler

Rourke trained with Afa, the Wild Samoan, at the gym for several months in order to portray a professional wrestler. Since Afa was a real-life wrestler, he had plenty of tips which undoubtedly helped Rourke earn an Oscar nomination for the film.

To become the latest Dark Knight and defeat Henry Cavill's Man of Steel, he had to bulk and add 30 pounds of muscles to his body. Director Zack Snyder even added a training montage full of squats, weighted pull-ups and more that Affleck had endured for the film.