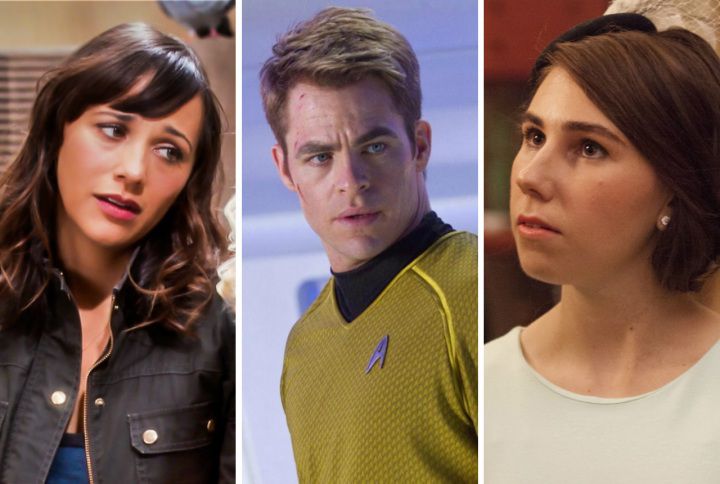 So what's going on here? Is it genetics or nepotism?

Ben Stiller has been cracking us up for years in hilarious movies like "Little Fockers," "Your Friends and Neighbors" and "Permanent Midnight." So it should come as no surprise that both of his parents were also famous and funny.

You probably know Scott Caan from “Ocean’s Eleven,” “Gone in 60 Seconds,” “Hawaii Five-0” and other things with numbers in their titles. Scott Caan’s father is very famous.

Hey, it’s Sean Astin! He’s in “The Goonies,” “Rudy” and “The Lord of the Rings.” Everyone likes Sean Astin. But did you know he has a famous dad?

Allison Williams is the woman who plays Marnie on “Girls” and the girlfriend in “Get Out.” Do you know who her famous father is?

[dx_custom_adunit desktop_id="RTK_K67O" mobile_id="RTK_5yk0"] Zosia Mamet plays Shoshanna on “Girls.” In real life, her dad is one of the greatest playwrights of his generation. Figured it out yet?

In addition to creating Zosia Mamet, David Mamet also wrote “Glengarry Glen Ross,” “Speed-the-Plow,” 1987’s “The Untouchables,” and “Wag the Dog,” to name just a few of his works.

Do you remember LMFAO? No? Well, they were a popular pop duo many years ago. Redfoo was one half of the duo, and his dad is one of the most influential people in the history of American pop music.

[dx_custom_adunit desktop_id="RTK_K67O" mobile_id="RTK_5yk0"] Redfoo’s real name is Stefan Gordy, and his father is Berry Gordy Jr., the founder of Motown!

You may recognize Amanda Plummer as Honey Bunny from “Pulp Fiction” or Wiress in “The Hunger Games: Catching Fire.” Will you recognize her famous father?

Christopher Plummer is arguably most familiar for his role as Captain von Trapp in “The Sound of Music,” but he’s been working constantly in TV and film for 60 years. Read his IMDb page if you have a couple of hours to kill.

Character actor Robert Pine is remembered for playing the commanding officer to the two main characters on “CHiPs” in the late ‘70s and early ‘80s.

You know the extremely lovable Rashida Jones as cunning, pliable, chestnut-haired sunfish Ann Perkins on “Parks and Recreation,” and for playing the title role on “Angie Tribeca.” It shouldn’t surprise you at all that both her parents are also beautiful, talented and famous.

Jennifer Aniston is an actress who was on an NBC sitcom in the ‘90s and has appeared in a few movies since then. Coincidentally, her father is also an actor.

John Aniston has not only been acting for decades, but he’s played one role for more than 30 years: He’s been Victor Kiriakis on “Days of Our Lives” since 1985.

[dx_custom_adunit desktop_id="RTK_K67O" mobile_id="RTK_5yk0"] Of course you know Abby Elliott from her four seasons on “Saturday Night Live.” But guess what. Her father was also on “SNL.” Did you even know that?!

Chris Elliott was on “SNL” in 1995. Before that, he starred in the cult classic show “Get a Life.” But guess what! His father is also a famous comedian!

Chris Elliott's dad, Bob Elliott, was half of the Bob and Ray comedy duo, along with Ray Goulding. They were popular in the ‘50s and ‘60s, and famous for their deadpan humor.

[dx_custom_adunit desktop_id="RTK_K67O" mobile_id="RTK_5yk0"] We first noticed Eva Amurri in the movie “Saved.” Since then she’s been on a bunch of TV shows, like “Californication” and “Undateable.” Her mom is super-duper famous...

Susan Sarandon has been famous for decades, so we don’t have to explain her to you. Fun fact, though: Amurri and Sarandon played past and present versions of the same character in the Adam Sandler comedy “That’s My Boy.”

Lenny Kravitz is a rocking rock-and-roller. He shreds so hard on his guitar. Lenny has two simple questions for you: 1. “Are you gonna go my way?” 2. “Can you guess who my famous mom is?”

[dx_custom_adunit desktop_id="RTK_K67O" mobile_id="RTK_5yk0"] Roxie Roker was a TV actress best known for playing Helen Willis on “The Jeffersons.” Her character’s marriage to a white guy was a groundbreaking portrayal of interracial relationships on TV in the ‘70s.

Mariska Hargitay has played Olivia Benson on "Law & Order: SVU" since 1999. She's one tough cookie on that show! In real life, Hargitay's mom is a legendary blonde bombshell. Do you know who we mean?