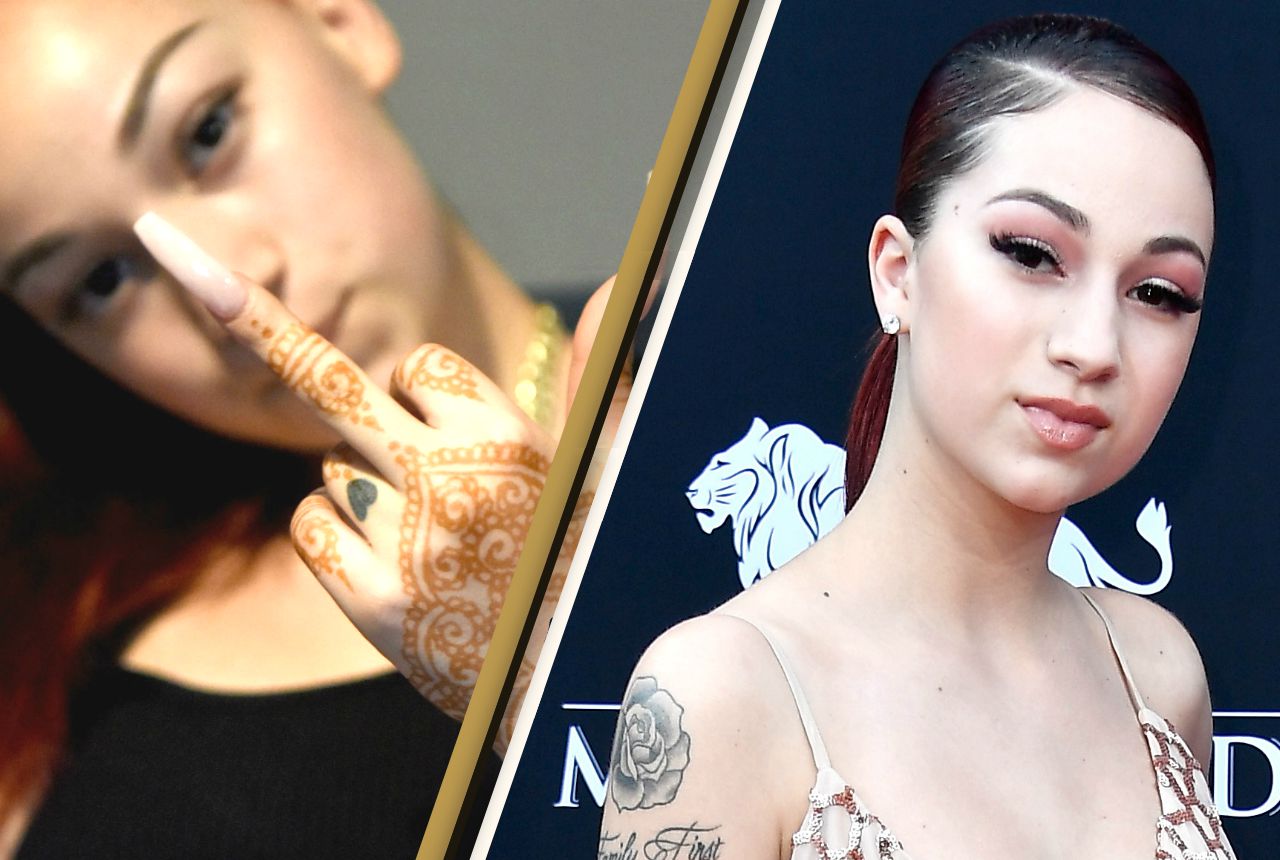 I love Danielle Bregoli and I don't care who knows. I love her from her impossibly thick skin to her killer behind-the-mic /stage persona Bhad Bhabie. Because there's no question that the "Gucci Flip Flops" rapper is talented AF. She cultivated a strong online fanbase following her meme-making appearance on "Dr. Phil." And then the 15-year-old showed the world she has both the business acumen and the talent to build an empire on the back of her easily marketable personality. Because she's got a quick wit, an on-point sense of humor and undeniable talent spitting bars. And Bregoli boasts a uniqueness unseen in any other entertainer who's tried her career trajectory. Boasting a sense of confidence unheard of in young Hollywood, Danielle Bregoli aka Bhad Bhabie is awesome. And she really doesn't care if you disagree with her (bich).

At just 14 years old, Danielle Bregoli aka Bhad Bhabie earned the distinction of being the youngest rapper of all time to debut at No. 68 on the Billboard Hot 100 thanks to her hit single "Hi Bich." With two remixes to the track now under her belt, it's clear that the single's status as a trap banger isn't going anywhere anytime soon.

She Pulled Up On Woah Vicky

[dx_custom_adunit desktop_id="RTK_K67O" mobile_id="RTK_5yk0"] Unlike Woah Vicky, Bregoli really is about that life. Despite the fact that Woah Vicky constantly trolls the teen rapper on social media, she was visibly shaken by seeing Bregoli IRL. True to her word, Bregoli even managed to land a solid punch on the back of the social media star's head.

Anyone can get down with "College Dropout" era Kanye West, but it takes a real one to gel with the rapper's controversial new image. "Before, I was skeptical about Kanye, but ay, maybe I want a Kanye collab," said Bregoli when questioned about who she would like to link up with on an upcoming track.

She Gets Plies TURNT

Surprisingly, Danielle Bregoli aka Bhad Bhabie scored the hard-to-earn respect of rapper Plies with her hit "Gucci Flip Flops." "Hey, how Bhad Bhabie have me turnt like this?" said Plies in an Instagram video dedicated to promoting Bregoli and Lil Yachty's bop-worthy hit single that debuted on the Billboard Hot 100.

Her Reactions To Fan Art

[dx_custom_adunit desktop_id="RTK_K67O" mobile_id="RTK_5yk0"] Just like any other celebrity, Danielle Bregoli gets her fair share of terrible fan art. Unlike other famous faces who celebrate each and every piece of fan art, Bregoli isn't afraid to call out the ones that make her look like a "f---ed up Celine Dion."

She Loves Her Fans

Bhad Bhabie consistently shows mad love to her fans. Unlike other viral celebrities who only give cursory nods to the fanbases that support their luxurious, fast-paced lifestyles, the "Hi Bich" rapper constantly reaches out on Twitter and Instagram to praise the support of her #Bhaddies.

Proving to the world that she can rock more than just a Hanes tanktop and jeans, Bregoli showed off her glow-up at the 2018 Billboard Music Awards. Nominated for top female rap artist of the year, Bregoli showed up and showed out for her first formal red carpet event.

She's Getting Her Own Reality Show

[dx_custom_adunit desktop_id="RTK_K67O" mobile_id="RTK_5yk0"] Judging by how quickly Bregoli built up her online fanbase of certified #Bhaddies, there's no denying that the teen's personality attracts followers by the thousands. Posting a screenshot of a TMZ article to her Instagram feed, Bregoli confirmed the rumors that she's well on her way to building herself a Kardashian-sized empire.

She Sells Out Tours

Think that Bregoli is just a flash-in-the-pan rapper who only has enough staying power for a few singles? Think again. The teen rapper is currently in the middle of her #BhannedInTheUSA Tour alongside industry mate Asian Doll. After successfully completing the North American leg, the duo will jet off to Europe to indulge their international audience.

Despite the fact that her troubled relationship with her mother is what got her on "Dr. Phil" in the first place, Bregoli still is her mom's ride or die. Along with paying off her mother's mortgage, Bregoli dedicated an entire song to her, titled "Mama Don't Worry (Still Ain't Dirty)."

[dx_custom_adunit desktop_id="RTK_K67O" mobile_id="RTK_5yk0"] Danielle Bregoli may be from South Florida, but she's not just another SoundCloud rapper looking to cash out on weak bars, bum beats and face tats. Pictured here, Bregoli poses with executives from Atlantic records just after she signed her six-figure record deal in late 2017.

Seeing her talent long before the rest of the world did, fellow South Floridian rapper Kodak Black did his very best to help put Bregoli on the map. Along with elevating her profile by putting Bregoli in his "Everything 1K" music video, he endorsed her remix of his song with XXXTentaction, "Roll In Peace."

Danielle Bregoli isn't just your run-of-the-mill fame-obsessed teenager who uses their Instagram strictly for self promotion. As seen here, Bregoli occupied a portion of her real estate on Instagram to promote#Lunchbag, an organization dedicated to ending hunger in "food insecure communities."

She Dines With Kim Kardashian

[dx_custom_adunit desktop_id="RTK_K67O" mobile_id="RTK_5yk0"] Putting her beef with Kylie Jenner aside, Bregoli proved the weight of her newfound celebrity by securing a lunch date with the ultra-famous Kim Kardashian. "See, I can play nice too," wrote the then-14-year-old aspiring rapper alongside a picture of herself with Kim K.

She Calls Out Jacob Sartorius

Someone needs to give Bregoli an award for calling out Jacob Sartorius (or as she affectionately refers to the teen star, Jacob "saggy titties") for being the absolute worst. Reminding him that she could "beat his ass if she really wanted to," Bregoli asserted her spot at the top of the teen celeb ranking.

Finally, someone has the nerve to call out Musical.ly kids for the fame-obsessed wannabes that they are. Serving up solid burns on tweens who "turn up too hard to songs that suck d---" while making "raggedy-ass facial expressions," Bregoli slams the worst social media platform of all time with finesse.

Yes, David Spade is a B-list celebrity who at the time, still had more star power than Bregoli. But that didn't stop the then-14-year-old from shading him on social media. "No lie, I thought dis guy was the waiter," captioned Bregoli alongside a picture of the two awkwardly posing together.

If you don't think that Danielle Bregoli is hilarious, you must have missed all of her YouTube reaction videos. As seen here, Bregoli responds to high fashion at the 2017 Met Gala Ball, referring to Celine Dion as a "bitch that wore a garbage bag" and A$AP Rocky as a "f---ing janitor."

She Turns Negatives Into Positives

Initally catching tons of heat over her intial claim to fame on "Dr. Phil," Bregoli reclaimed a heavily-screencapped still of her rolling her eyes. Uploading it to her Instagram when she was still building a following, Bregoli turned the image from a meme to a certified mood.

[dx_custom_adunit desktop_id="RTK_K67O" mobile_id="RTK_5yk0"] Most teenagers would crumble at the thought of receiving constant hate from online trolls dedicated to spewing anonymous venom, but not Bregoli. Instead of hiding from her critics, the "These Heaux" rapper dedicated a whole-ass post to her haters, overlaid over an image of her proudly flexing her middle finger.