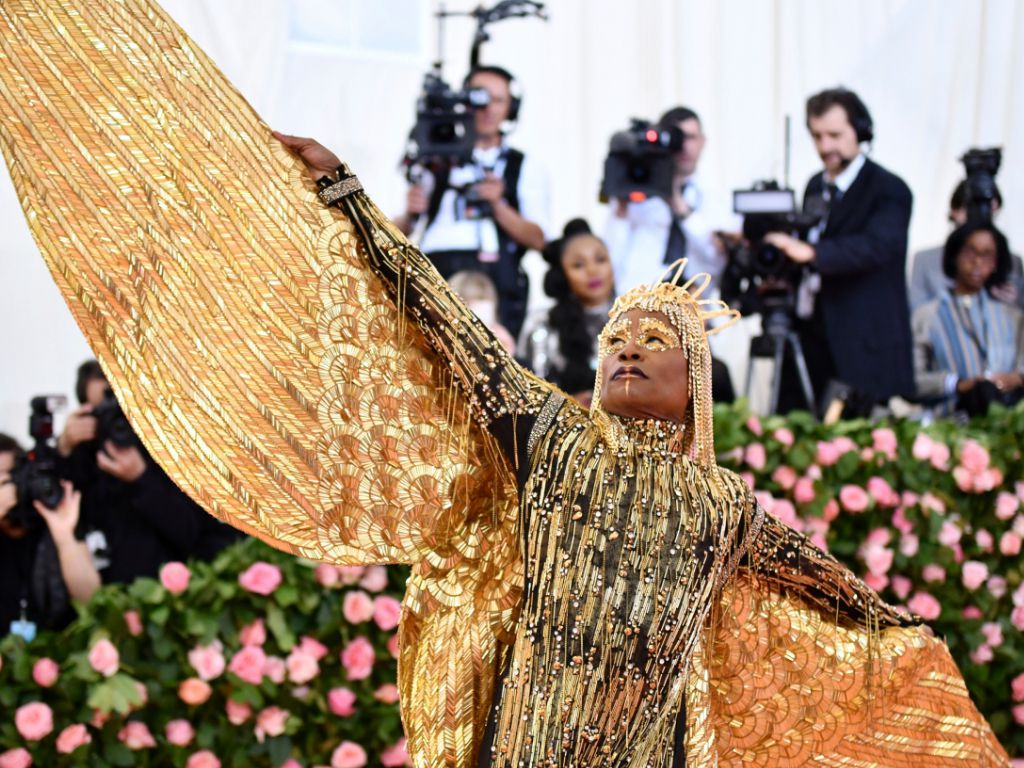 Red carpets have seen some absolutely incredible outfits this year. They range from the stunning and gorgeous to the extreme. Here are some of the boldest, most eye-catching (and bewildering) red-carpet looks of 2019...

Billy Porter wore this incredible tuxedo dress to the 91st Academy Awards in February. Said Porter of his dress, "My goal is to be a walking piece of political art every time I show up. ... Women show up every day in pants, but the minute a man wears a dress, the seas part."

Cardi B is known for her eccentric outfits, but her best look of the year (so far) is this stunning oyster dress. She wore it to the Grammy Awards ceremony, more or less stealing the show, which was no small feat considering some of the other dresses the event saw...

You've got to love a bright yellow skull dress that encourages the viewer to go to hell. Singer Poppy wore this to the iHeartRadio Music Awards, and the more you look at it, the more incredible it looks. This dress is so bold that even its smaller details pop with originality.

Zendaya likes to bring something interesting to the table, but this year she went all out, cosplaying as Disney's Cinderella. Lily James had better watch out. It almost looks like Zendaya is low-key auditioning for the role of a live-action Disney princess.

Another star who relishes the Met Gala is Ezra Miller, and he didn't disappoint this year. There was a trend among costumes for the 2019 gala, as Miller was not the only actor to walk around carrying a copy of his own face. Nevertheless, his large wig and seven eyes turned a lot of heads.

Gwendoline Christie didn't have to go all out for the premiere of "Game of Thrones" season eight, but everyone's glad she did. The actor turned herself into a physical manifestation of the show's ice-and-fire theme. Jennifer Lawrence may be the "Girl on Fire," but Christie is the Knight on Fire.

Not only was actor Gemma Chan's Oscars dress beautiful, it was also practical. Note that Chan's hand has disappeared into a pocket in this photo. According to Chan, she used the pockets to smuggle cookies into the Academy Awards ceremony because the event doesn't offer refreshments.

Giving Ezra Miller strong competition at this year's Met Gala was Jared Leto, who also carried around a copy of his own face. In this case, it took the form of a severed mannequin head. Clever, but it's hard to deny Miller's mask on a stick was less cumbersome.

Deepika Padukone's billowing white dress looks like '80s wedding fashion taken to the extreme. She wore it to a screening of the Elton John biopic "Rocketman" at Cannes. Considering Elton John's fondness for outlandish costumes, it's a odd there weren't other over-the-top dresses on display.

Singer Joy Villa likes wearing outfits that make political statements, and this was no exception. At the Grammy Awards, Villa came dressed as Donald Trump's long-promised wall, complete with barbed wire, "Make America Great Again" purse, and a Pink Floyd reference on the back.

Post Malone is known for bucking typical male fashion trends, which is what led him to sport a sparkly pink leather suit to the Grammys this year. Men often play things a lot safer on red carpets, so the variety Post Malone brought to the ceremony was more than welcome.

Katy Perry is known for her unusual outfits, so when she became a chandelier for this year's Met Gala, she didn't even get as much attention as in previous years. Credit where it's due: Those individually powered lights probably weren't comfortable to wear, and this look really is very pretty.

Tierra Whack wore this fluffy, multicolored monstrosity to the Grammys, and it's hard to deny she looks fantastic. Note her matching eye shadow that really makes the entire ensemble pop, turning her into an intricate part of this explosion of color.

Sririta Jensen wore this stunning purple dress to the "Rocketman" screening at Cannes. The huge shoulders push the dress from simply pretty to a true fashion statement that stands in contrast to all the dull monochrome suits that always swamp an event like this.

At this year's Brit Awards, Daniel Lismore brought his familiar plastic orange cone along with a vibrant, color-coordinated dress to match. Called "England's Most Eccentric Dresser" by Vogue, Lismore is known for these kinds of outfits.

Halsey's black-and-blue lace dress at the Billboard Music Awards looked like something you'd expect to see on a fantasy ice pirate, especially thanks to her matching blue lipstick. It's nice when an outfit shows one's tattoos to full effect, and Halsey's dress gave everyone a good look at her ink.

While not as outlandish as Daniel Lismore's orange dress, Olly Alexander's Brit Awards outfit has an air of theatricality. Alexander had a good time swishing his fur-lined cloak for the cameras, and its smart use of black and white meant the singer could be unique while still looking semi-traditional.

Winne Harlow has worn many stunning dresses on red carpets around the world. Her most eye-catching 2019 look is the swishy orange dress she wore to the premiere of "Once Upon a Time in Hollywood." Its head covering didn't stay on for the entire event. Harlow let it to flow down her back instead, creating two looks from a single stunning ensemble.

At the Oscars this year, director Spike Lee donned a bright purple suit in memory of Prince. He also wore Prince's famous symbol on a gold necklace, matching it with the gold knuckledusters reading "Love" and "Hate" the late actor Bill Nunn wore in Lee's classic film, "Do the Right Thing."

"Game of Thrones" star Sophie Turner looked almost unrecognizable at the Billboard Music Awards this year. She wore a silver Luis Vuitton jumpsuit that looked like something out of a budget '80s sci-fi movie.

Leomie Anderson's dress for the "Once Upon a Time in Hollywood" premiere looked absolutely incredible, a sea of gold sparkles atop a long black train that made Anderson look like a constellation. It's an apt dress for the premiere of a movie about infighting among stars.

Cindy Bruna's white dress that she wore at a Cannes screening of "La Belle Epoch," looks like an '80s power suit dialed up to 11, or something the White Power Ranger might wear if he needed to attend a business meeting.