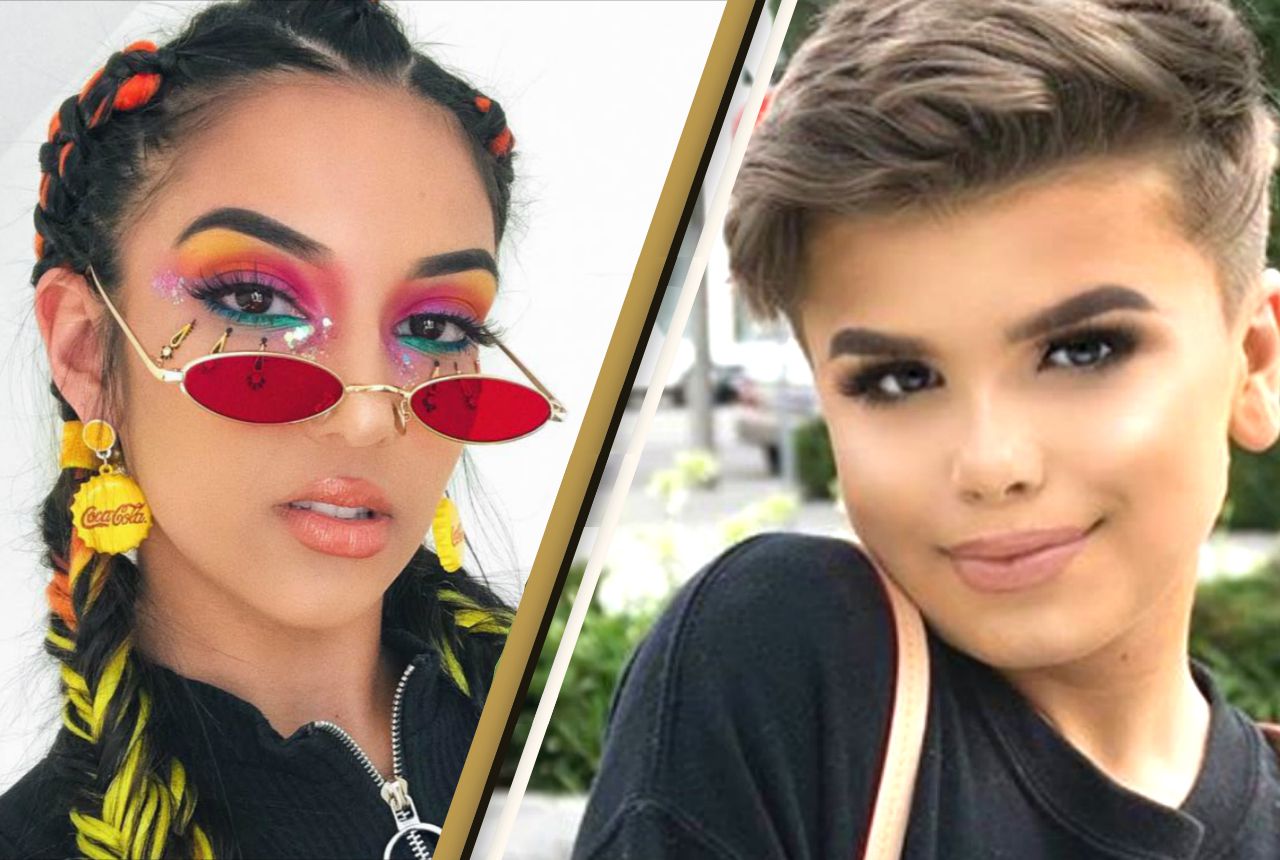 Like it or not, YouTube is the best platform for young wannabe celebs to cut their teeth. Long gone are the days of producers and casting agents "discovering" fresh young talent. They're not out there wandering the streets of Los Angeles and New York. They're at home on their computers or their smartphones. So now, studio execs need only pore through the endless content pools of YouTube. Because that's where they'll discover charming, talented stars capable of commanding entire internet fan armies. Undoubtedly, these young YouTube stars will soon knock their predecessors off of their throne and become the next generation of viral royalty.

If you've hit the Instagram Explore page recently, chances are that you came across Gina Box's dreamy feed full of mesmerizing tutorials that seem too flawless to be real. Channeling her inner Kardashian, Box proves that anything is possible if you have enough contour powder and lipliner.

With her initial claim to fame dating back to her time on the Lifetime reality series "Dance Moms," Nia Sioux has worked hard to maintain relevance in the shadow of breakout stars Maddie and Mackenzie Ziegler. Now, Sioux has a new band of followers keeping up with her regular fashion, lifestyle and travel vlogs.

On paper, Fabulous Hannah's YouTube channel is very similar to the countless other wannabe lifestyle/fashion/makeup vloggers clogging up the content tunnels. However, it's Hannah's unique personality, endless positivity and bubbly take on everything that will keep you coming back to her channel for more.

No, that famous last name is not a coincidence. Jazmyn Bieber is the younger sister of ultra-famous pop star Justin Bieber and is clearly trying to piggyback off of his fame. Surprisingly, her videos are entertaining in their own right, (and totally age-appropriate) earning over 200,000 subscribers to date.

MyLifeAsEva is a DIY mastermind who provides how-to videos for her followers eager to learn how to stud their own phone cases or make their own school supplies. In addition, Eva has been flexing her muscles as a fashion guru in the making, showing off her candy-colored hair and unique vintage style.

Whoever said that magic tricks are for nerds clearly is not well-acquainted with Justin Flom's YouTube channel. Firing off illusion after illusion that you truly have to see to believe, Flom delivers his own brand of mind-bending trickery that has earned him 195,743 followers to date.

If you're looking for a fun, breezy way to pass the time you set aside for mindlessly browsing social media, Jen McAllister is your gal. Complimenting her lighthearted, affable personality with her unique style of content, McAllister's channel definitely puts her 3 million subscribers in a good mood with her weekly uploads.

Navigating your 20s is hard but thankfully, Lauren Elizabeth is here to dish on everything from intimate self-care and healthy, mindful eating to Forever 21 shopping hauls. To top off her channel, the vlogger also regularly proves that she isn't afraid to put her vulnerability on full display and help her fans navigate their romantic lives.

Veronica Merrell and Vanessa Merrell, better known as the Merrell twins, are both aspiring comedians, actresses and singer-songwriters (talk about triple threats). From hilarious shorts to questionable challenges and comedy shorts, the Merrell sisters definitely earned their spot in the 2018 Teen Choice Award nominee list.

While YouTube is undoubtedly full of wannabe stylists, influencers and lifestyle vloggers, very few pull it off with the finesse that Lissy Roddy manages in her hundreds of uploads. Additionally, Roddy's style and season-specific lookbooks are also affordable, purchased from stores like Top Shop and H&M.

Looking to mix up your usual contour/highlight/bake/blend makeup routine? Look no further than up-and-coming Aussie makeup artist Rowi Singh. Fusing her Indian heritage with her evident love of beauty, Singh delivers sleek, unique makeup videos that will give you ultimate fesitval inspo.

Streetwear collector and stylist Blazendary definitely caters to fans who appreciate the finest threads and accessories that money can by. Flexing his dope sneaker collection and ultra-exclusive wardrobe for his ever-increasing follower count, you should join the #Blazenfam if you're looking to up your fashion game, hypebeast style.

From prank videos to several insanely popular "overnight challenge" videos, British teen vlogger Jordan Houston is following in the footsteps of famous YouTuber Jake Paul (you know, if Paul actually had charm and wasn't a giant d-bag). Easily maintaining a steady following, it's only a matter of time before Houston blows up for real.

The undisputed queen of the "Belfie," (that's butt selfie, for those of you living under a rock) fitness model-turned-social media superstar Sommer Ray is quickly developing a strong YouTube following. Gaining over 1 million subscribers in just under a year, Ray is approaching certified influencer territory.

When you think of the Dobre brothers, no doubt twins Lucas and Marcus come to mind. Former members of Jake Paul's Team 10 social media incubator, the twins have tapped into the talents of their other two brothers to develop a channel that showcases the talents of the four Dobre boys. From pranks, to backflips and challenges, the family-run channel currently has 3 million subscribers.

Finally. A YouTube style/lifestyle vlogger that is actually accessible. Boasting videos like "Surviving Summer If You're Bit Fat" and "Testing Size 14 Jeans Across 10 Brands," Wood produces content that is actually relatable to people that live outside of Los Angeles. Self-depreciating and quirky, Wood's down-to-earth videos are a must-watch.

Move over James Charles because MakeupByJack is here to show his followers exactly how to highlight their cheekbones into blinding beams of radiance. With a charming British accent and serious talent, MBJ is well on his way to passing the 500,000 follower mark on Instagram with his YouTube channel not far behind.

Everyone's favorite little Nicki Minaj fan is all grown up and ready to vlog. Initially made famous by her surprising on-air rap skills, Grace parlayed her viral apperance on "The Ellen DeGeneres Show" into a budding career as a jack-of-all-trades vlogger. She sings, she raps, she posts makeup tutorials...all for the benefit of her 3 million subscribers.

Move over YouTube makeup artists, because 12-year-old Welsh siner and glam expert Reuben de Maid is here to show you all how to properly beat a face. With nearly 100,000 subscribers, a growing social media following and several collabs with other famous YouTubers under his belt, de Maid is definitely on his way to becoming a star.