Do You Remember These Early 2000s Video Game Characters? Neither Do We.

Greg Smith
Do You Remember These Early 2000s Video Game Characters? Neither Do We. March 19, 2018 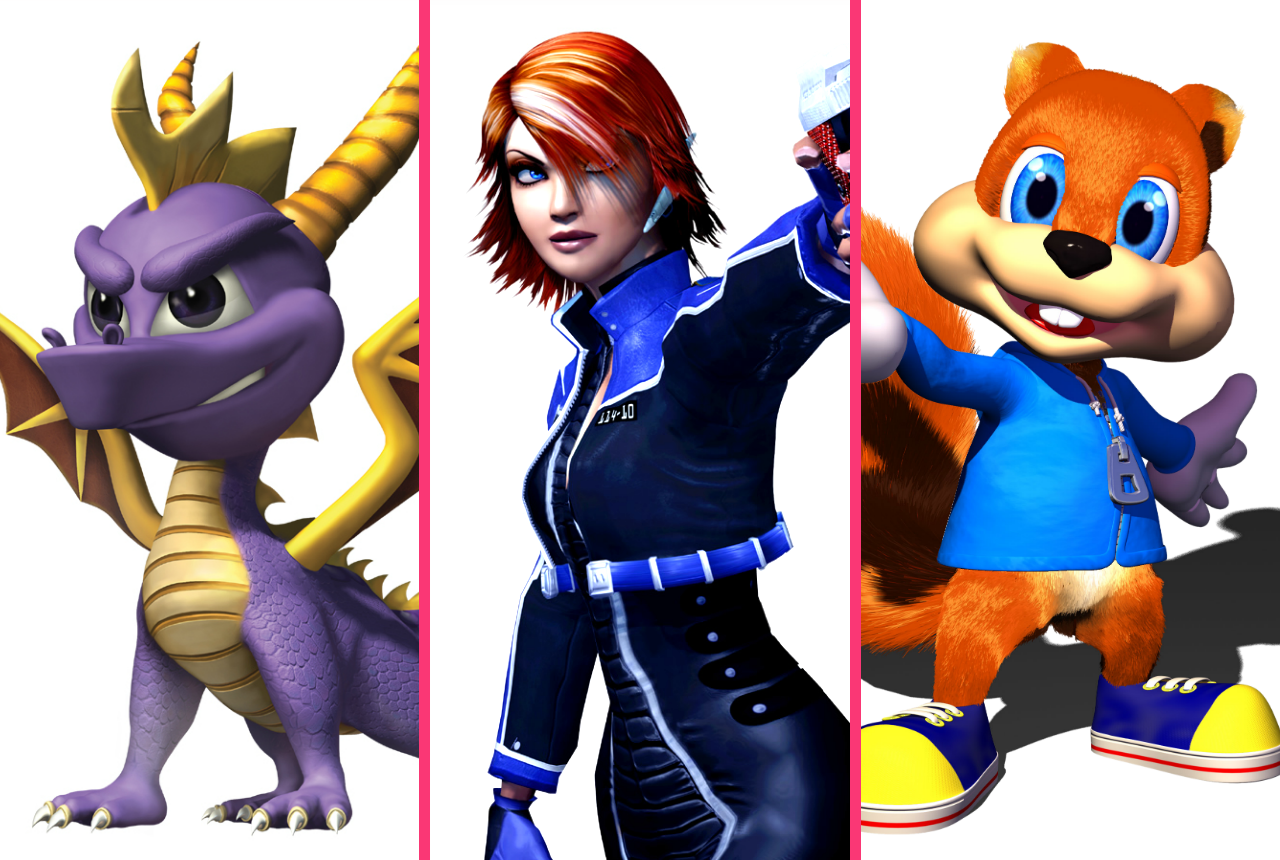 In the early aughts, video games were undergoing a change. PS1 to PS2. Xbox to Xbox 360. And Sega Dreamcast to... uh... Well, N64 to Gamecube. And gamers met a deluge of what would become obscure 2000s video game characters from studios desperate for eyeballs and sore thumbs. But Mario, Sonic and Link these video games mascots certainly are not. Game devs hope they'd be breakout characters. But they exist only in the corner of our collective memory that covered in cobwebs. So now it's time to travel back in time. Because we're gonna revisit some of these obscure 2000s video games characters. So how many can you remember?

Suda51, the eclectic, punk rock video game developer behind No More Heroes and Lollipop Chainsaw, made his American debut with Killer 7. With its abstractly cell-shaded graphics, counterintuitive rail-shooter control scheme, and fragmented "what is real?" narrative, the game was a cult hit. As for Harman Smith, the center of the split-personality adventure, he has faded into obscurity.

Cate Archer - The Operative: No One Lives Forever

Before there was Archer, there was Archer -- Cate Archer, the sleek, chic, and totally fab hero at the center of the tongue-in-cheek The Operative: No One Lives Forever. A first-person shooter with charm to spare, the game played like an indie comedy version of Austin Powers, and I mean that as a sincere compliment.

Everyone remembers Goldeneye, but only true believers remember Perfect Dark, the Nintendo 64's other high-quality first-person shooter. At the center of this cyberpunk sci-fi game was Joanna Dark who, despite not being as well-known as James Bond, objectively has a cooler name. Did you even realize a 2005 sequel, Perfect Dark Zero, was released for Xbox 360?

John Mullins is the titular Soldier Of Fortune in this shooter, but he was instantaneously overshadowed by the content of his own game. Soldier Of Fortune features garishly, ghoulishly, gratuitously rendered violence. Heads explode, guts are sprayed, limbs are severed, and main characters are immediately forgotten.

Dr. Muto is a 2002 platforming game, released for Gamecube, Xbox, and PS2. In it, the good doctor transforms himself into five different creatures using a DNA splicing gun. Unfortunately, he never transformed himself into a memorable mascot. The doctor is, sad to say, out.

What if the story of Alice In Wonderland was told as a bluntly violent, goth fantasy that seemed to be written by someone whose pop culture diet began at Nine Inch Nails and ended at Marilyn Manson? You'd have American McGee's Alice, a third-person action-horror game that should, frankly, be on every Hot Topic piece of clothing ever made.

Are you tired of intense, dark, punishingly difficult contemporary games like Dark Souls? You may not know it, but AiAi is here to bring you into his Super Monkey Ball of joy. The Sega franchise began on Gamecube, before eventually spinning out into relative cultural irrelevancy. I smell a "Rise/Dawn/War Of The Planet Of The Apes" style reboot!

The Matrix changed the pop culture world in 1999, making the early 2000s the prime time for Matrix-influenced media. Nowhere was this more evident than the world of Max Payne, a hard-boiled third-person shooter that combined noir histrionics with bullet time powers. Payne did his thing in two sequels, with his squinty likeness changing dramatically each time.

In the early 2000s, postmodernism was well on the way to being the base reality of how we create and consume culture. Viewtiful Joe was thus the mascot of that time, as he literally entered a film, changed time by rewinding and fast-forwarding, and beat up the characters within. If he existed now, he'd be making those weird Simpsons remixes we're all obsessed with.

I'm sorry, but how is Dino Crisis not a multimillion dollar video game franchise? It's a beautiful fusion of Resident Evil-style gameplay, except instead of fighting zombies, our badass hero Regina fights -- you guessed it -- dinosaurs. A couple sequels were dropped later in the 2000s, but until we can clone its mosquito eggs, that's all we've got.

Do even the most thorough of JRPG fans appreciate or remember the world of Evolution? Do they remember the plucky main character Mag Launcher, and his trusty hand-shaped weapon slash semi-sentient best friend Aeracomet? I'm just saying, if you've got room in your craw to remember Master Hand, you can spare some room for these beautiful weirdos.

Kao the kangaroo! He's cute! He wanders around the jungle collecting coins and bopping bad guys with boxing gloves! He's... trying to rescue his family from vicious, villainous hunters? Perhaps it was this jarring clash of contexts that kept Kao's legacy from jumping too high.

If you only play one game on the now defunct Sega Dreamcast, I cannot recommend Seaman enough. It is unlike any other experience. You plug a microphone into your controller, and raise the titular creature from birth to death, speaking with him about, well, everything along the way. He completely, magically understands you -- I told him my favorite movie was The Matrix and he referenced the film! In a just world, this game would be in a museum.

Starring in a sequel to the Dig Dug franchise, Susumu Hori is the mascot of Mr. Driller and the son of Dig Dug's main character. As you might guess, you drill a series of colored blocks in Tetris-style grids. Susumu and his world seem reverse engineered from other, stronger games' spare parts. No wonder we don't remember it at all.

The NBA Street franchise had your standard fare of NBA superstars and modern day lineups (and, um, Mario), but it was also anchored by fictional "street legends". The most highly featured of these, to the point where EA Sports put him on the cover (instead of an actual athlete), was Stretch. To put it in NBA Jam parlance, EA went for a boomshakalaka and got an ugly shot.

Before Guitar Hero, Rock Band, or even Donkey Konga, there was Samba De Amigo. What? You don't remember the Dreamcast latin jazz rhythm game starring the lovably, possibly mildly offensive monkey Amigo? We don't blame you, but if you ever have a "pressing buttons in time to the sounds of Tito Puente" itch, look no further.

A politically charged, fascist near future where an authoritarian government cracks down on freedom of self-expression, and the only things that can save us are the youth and the power of art. Hmm... maybe Jet Set Radio, anchored by Beat, was more prophetic than we gave it credit for.

Another would-be icon from a JRPG (not everyone can be Cloud, ya know?), Vyse is a plucky young air pirate leading a group of rebels that resist against an overbearing, evil empire. So, why didn't this Luke Skywalker surrogate and his Star Wars-esque game become a stone-cold classic. I guess these weren't the pirates they were looking for.

She's moving, she's grooving, she's bearing a striking resemblance to the lead singer of Deee-Lite. She's Ulala, the funky reporter at the center of the extraterrestrial musical shenanigans of Space Channel 5. It's not too much to ask for a crossover game between her and Cate Archer, is it?

The TimeSplitters series is so friggin' fun, and it is such a shame it's not more well-known. They're ruthlessly entertaining first-person shooters with amazing couch multiplayer, all with a certifiably looney sense of humor. Sergeant Cortez acts as our voice of reason tethering the comedic chaos around him, and I would take a game centered around him over a bland soldier in Call Of Duty ten times out of ten.

Shenmue should've been the Dreamcast's epic. Instead, it's a curiosity, a footnote in video game history. Before Rockstar wrote the book on story-driven open-world sagas, Ryo Hazuki centered a multi-disc game with a storyline that would put any current prestige Netflix drama to shame. Maybe he was too bland to last -- it's campily funny watching him stoneface his way through increasingly intense situations.

Talk about a pivot. Conker began as a cutesy, Disney-esque squirrel. When Rare realized that wasn't working, they swerved hard in the opposite direction in their N64 cult hit Conker's Bad Fur Day. Full of swear words, ultraviolence, and instantly dated pop culture references, it was a notably risky swing from Rare -- one that, when it comes to cultural staying power, didn't quite connect.