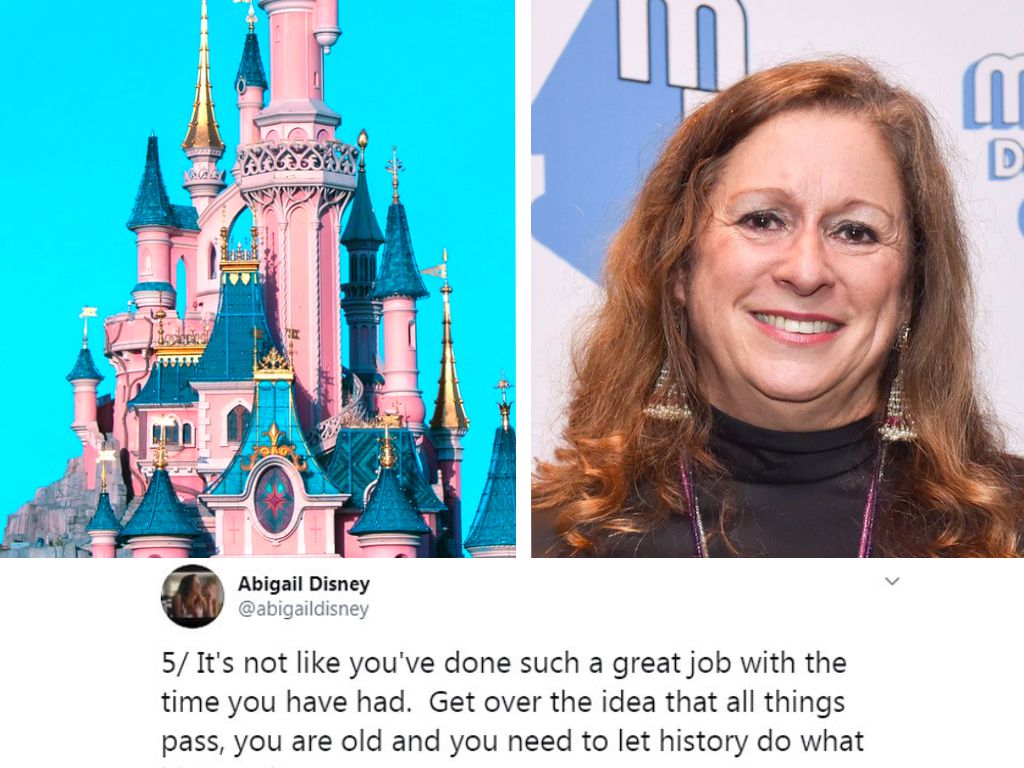 Filmmaker and activist Abigail Disney, granddaughter of Roy Disney (Walt Disney’s brother and co-founder of the multi-billion dollar company), has been pretty vocal lately on her grand-uncle’s legacy. She has been upfront and direct with her views on income, social inequality and even the working conditions for Disney's theme park employees. Today, the heiress has become known as the "woke Disney Princess.”

Abigail Disney Took a Visit to "The Happiest Place on Earth"

Disney Parks are renowned for being the happiest places on Earth. However, according to the company’s employees, this is not the case as workers struggle to make ends meet. Abigail Disney wasn't aware of this before she made her most recent trip to the Anaheim park, and her visit changed how she viewed her great-uncle Walt's legacy forever.

She Heard a Call For Help

Disney Employees Are Anything But Happy

In an interview with Yahoo in July 2019, Abigail Disney explained how one of the messages wrote, “I don’t know how I can maintain this face of joy and warmth when I have to go home and forage for food in other people’s garbage.”

The grand-niece of Walt Disney himself said she left her meeting with the Disney employees “livid” because of the lack of respect and support the workers were getting from her family’s company, which left her ultimately questioning the nature of Walt Disney’s legacy.

She Called Out Disney's CEO

A filmmaker herself and a human rights activist, Abigail Disney assertively called out Disney CEO Bob Iger, demanding that he needed to fix the damaging wage gap between his salary and that of an average employee at Disney.

She Tweeted Her Criticisms of the Disney Company

In April 2019, Abigail Disney tweeted several times criticizing CEO Bob Iger’s compensation of $66 million in 2018 and another $35 million in the first quarter of 2019 while his employees struggled to feed themselves.

She Said the CEO is "Paid Far Too Much"

One month before she called out the Disney corporation on Twitter, Abigail Disney affirmed that CEOs are generally “paid far too much” and that “there is nobody on Earth worth 500 times his median workers’ pay.”

In a statement following Abigail Disney’s tweets, the Disney franchise defended Bob Iger’s compensation saying that he had “delivered exceptional value for shareholders,” thereby justifying his extreme wealth at the hands of his struggling employees.

Abigail Disney Herself Has a Net Worth of $100 Million

Although she argues against Disney's executive moguls and other billion dollar companies, Abigail Disney herself has a staggering net worth of $100 million. However, Disney believes that she and more of America’s richest people should be taxed more because of their wealth.

She Wants to Be Taxed More

In an open letter to the 2020 Presidential Candidates, 18 of America’s richest people wrote to "call on all candidates for President, whether they are Republicans or Democrats, to support a moderate wealth tax on the fortunes of the richest 1/10 of the richest 1% of Americans - on us.” Abigail Disney told CNN that she is one of the 18 people who wants to be taxed more.

Disney Says She Is Not Paying Her Fair Share

In an interview with CNN in June 2019, Disney explained how she and other wealthy Americans are not paying their fair share of taxes and haven’t been for a long time. Disney asserts that she doesn’t want any more tax benefits and wants to see a more healthy society.

In 2012, Abigail Disney gave up her portion of profits from a Disney family investment in Ahava cometic company. Disney stated, “I cannot in good conscience profit from what is technically the ‘plunder’ and ‘pillage’ of occupied natural resources.”

Income and Equality Are Game Changers In Her Eyes

Abigail Disney spoke on CNN about Disney’s CEO receiving a salary 1,424 times higher than the average Disney worker. According to the Disney heiress, wealthier groups are creating a social class far above the vast majority of people, citing that 47% of American people struggle to cope with a $400 emergency.

'The Rich Live on a Different Planet'

In her interview on CNN, the human rights activist spoke about how rich people don’t share the same reality as everybody else and subsequently "don't share the same planet." She pointed her finger directly at the money hungry moguls at Disney when discussing unequal pay and living conditions in America, asserting that they cannot begin to understand what it means to not have $400 for an emergency; calling it “couch cushion money” for them.

The Paths to the American Dream Are Eroding

Abigail Disney believes that the paths to the American dream of opportunity and solidarity that her grandfather and grand-uncle took have been “eroded” by the extreme wealth and extreme poverty in America. She sees this even in her family’s own company and Walt Disney’s legacy.

The Walt Disney Company Will Not Address Abigail's Concerns

The Walt Disney Company responded to Abigail’s concerns by highlighting the company’s charitable works, employee benefits and profitable stock-shares. However, on CNN, Abigail Disney wondered why Disney employees are on food stamps if the company’s revenue is so great.

She Emailed Disney's CEO But Got No Reply

Walt Disney’s grand-niece said that she emailed the company's CEO, Bob Iger, raising her concerns for the welfare of the his employees, but was ignored. “Bob needs to understand that he is an employee just the same as the people scrubbing gum off of the sidewalk are employees, and they’re entitled to the same dignity and human rights that he is,” said the 'woke Disney princess.'

In April 2019, the Disney heiress tweeted, “Let me be very clear. I like Bob Iger. I do NOT speak for my family but only for myself. Other than owning shares (not that many) I have no more say in what happens there than anyone else. But by any objective measure a pay ratio over a thousand is insane.”

She Publicly Defends the Rights of Disney Employees

The "woke Disney Princess" got technical on Twitter back in April when she wrote about Iger’s hefty bonus. “There are just over 200K employees at Disney. If you took half that 65 M bonus, along with half the very generous bonuses everyone else up in the C suites got, I am quite certain you could move significant resources down the line to more evenly share in the great success.”

The newly anticipated Disney streaming service, Disney+ has recently come under scrutiny for its warning message at the beginning of movies that may have an offensive nature, and Abigail Disney outspokenly supports these arguments. These messages aim to warn viewers that the movie is shown as it was originally made and “may contain outdated cultural depictions.” However, this message was considered a passive way of acknowledging racism and other offensive content.

Arguments arose that the disclaimer message on Disney+ does not warn how the content is offensive but instead uses cultural context as an excuse for the insensitivity in the movies. Disney has been compared to Warner Bros. and their usage of a more direct disclaimer message at the beginning of “Looney Tunes” explaining how their cartoons “depict some of the ethnic and racial prejudices that were commonplace in American society… [they] were wrong then and are wrong now.” This message was celebrated for its brutal honesty.

In 2014, the modern Disney Princess wrote about her great-uncle on Facebook saying, “Anti-Semite? Check. Misogynist? OF COURSE!! Racist? C’mon he had a film (‘Jungle Book’) about how you should stay ‘with your own kind’ at the height of the fight over segregation!” She certainly doesn't mince words!

She Agreed With Meryl Streep's Criticism of Walt Disney

In 2014, Abigail said that she loved what Meryl Streep had to say about Walt Disney being a “bigot” in her speech at the the National Board of Review. Disney agreed that although her grand-uncle was a man of his time, what her family has done is “dumb down” and “gloss over the untidy complexities of life, sometimes at a great cost to the lived experiences of many others.”

She Voiced Her Opinions on the "OK Boomer" Trend, And Agrees With Millennials

Not only does she publicly voice her opinions on her great-uncle’s legacy, Disney has come into the spotlight last month for her views on the “OK Boomer” trend. In November, Disney tweeted a five part tweet knocking her generation for criticizing Millennials and Gen Zers.

Her Tweets Have Sparked a Following— And a Conversation

Disney’s tweets regarding Baby Boomers and Millennials got people interested in what the 'woke Disney Princess' had to say. “Millenials [are understandably resentful] towards a generation that has selfishly poisoned their water,” she tweeted in response to her own generation being 'triggered' by the 'OK Boomer' trend online (a retaliation towards Baby Boomers for criticizing younger generations). She also told Boomers to “sit down and let the kids drive.”