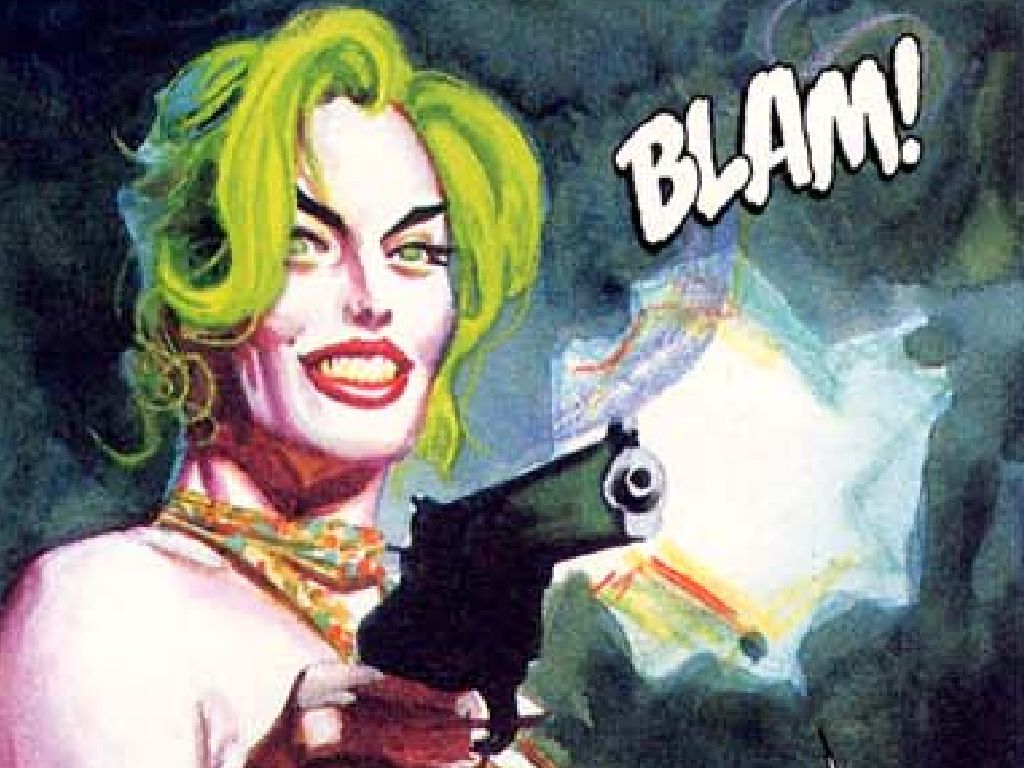 There have been countless different versions of Batman’s nemesis, the Joker, over the history of his existence. Some, such as Pirate Joker or Hyena, are absolutely ridiculous. Here are some of the weird and wonderful Jokers that outdo even Joaquin Phoenix’s version of the character.

“Batman: Bloodstorm” is an Elseworlds comic story in which the creators have been given free-reign to do a weird alternate universe take on the classic Dark Knight mythos. In “Bloodstorm,” Batman is a vampire, while the Joker is a vampire hunter who also oddly becomes the leader of Dracula’s gang.

Appearing in “Batman Beyond: Return of the Joker,” Joker Jr is the result of the Joker kidnapping Robin (Tim Drake) and torturing him until he takes a mental break. Drake ultimately killed the Joker and broke his programming – at least for now. This isn’t Drake’s only appearance on this list…

The Joker is also called the Laughing Man in “Batman: Nosferatu,” a disturbing comic which draws obvious and deliberate inspiration from early German impressionist cinema, including movies such as “Nosferatu” (obviously) and “The Cabinet of Dr Caligari.” In the comic, the Laughing Man is a terrifying skeletal cyborg, making this a notable departure from the character’s standard form.

What’s worse than one Joker? How about a whole bunch of them? In “Batman Beyond,” the Joker is long dead (or is he?) and in his place is a street gang called the Jokerz who are all doing their best to emulate the Clown Prince of Crime.

“Batman: Two Faces” is a reimagining of the Batman mythos through the lens of Victorian horror, specifically Robert Louis Stevenson’s “Strange Case of Dr Jekyll and Mr Hyde.” In this comic, Batman and the Joker are the same person, with Bruce Wayne transforming into his nemesis as the result of taking a potion.

First appearing in “Batman: Thrillkiller,” Bianca Steeplechase is a female version of the Joker who is otherwise very similar to her male counterpart. She dates Harley Quinn, poisons Robin, tortures Bruce Wayne and basically makes herself a nuisance at all opportunities.

“Batman: Damned” is essentially a murder mystery in which Batman isn’t sure whether or not he killed the Joker. Thus, the character has almost no physical presence in the story, instead becoming an embodiment of Bruce Wayne’s struggle with his own moral code. As smart as this idea might be, the comic is mostly remembered because its first print run feature an image of full frontal Batman nudity that nobody asked for.

Wow, Hyena is dumb. During the ‘90s, Marvel and DC were willing to do silly crossover books every now and then, and one such team-up led to Amalgam Comics, mash-ups of fan favorite characters. Batman and Wolverine became the ridiculous Dark Claw, and his nemesis was Hyena, a cross between the Joker and Sabretooth.

A similar crossover between DC Comics and 2000AD led to the creation of Dark Judge Joker, a character who answers the burning question that all comic fans have been asking for years: what if the Joker and Judge Dredd had a baby? Finally, we know what such a character would look like, and we were better off without this knowledge.

“Captain Carrot and His Amazing Zoo Crew”, which is an official in-continuity comic published by DC, takes place in alternate universe Earth C-Minus, which is ruled by anthropomorphic cartoon animals. The Porker, this universe’s version of the Joker, constantly fights against Batmouse. This all seemed a lot weirder before Spider-Man turned up in “Into the Spider-Verse” last year.

In “Planetary/Batman,” the Joker is a character named Jasper who is an assistant to detective Richard Grayson. While Jasper isn’t exactly villainous within the comics, he does seem just a little off, laughing nervously to himself and getting a bit too excited by dead bodies.

Hailing from the alternate dimension of Earth-13 (yes, all parallel universes use this numbering system in DC comics), this version of Bruce Wayne is simultaneously both Batman and the Joker. Earth-13 Bruce Wayne first appeared in an in-continuity “Smallville” comic book tie-in, so this might actually be canon within the Tom Welling Superverse.

In an alternate future, Batman has inspired a cult to plague the city of Gotham and surgically alters citizens to turn them into versions of the Caped Crusader’s villains. One man, Joe Collins, is transformed into the Joker, but also finds the Batcave and becomes the new official Batman. There are lot of these kinds of stories.

In the dark Victorian horror comic “Gotham by Gaslight,” the Joker is an amalgamation of several real and fictional mass murderers from this time period, combining elements of (the fictional) Sweeney Todd with the very real Jack the Ripper.

In “Superman: Speeding Bullets,” instead of being found by the Kents, Last Son of Krypton Kal-El is instead found by Thomas and Martha Wayne, and is raised as Bruce until his parents are murdered in an alley. As the story is essentially about Superman and Batman being the same character, it makes sense that in this comic, the Joker is actually Lex Luthor.

Cartoon series “Batman Beyond” shows the future of “Batman: The Animated Series,” long after the Joker died at the hands of Joker Jr, Tim Drake. Suddenly, the Joker returns, young and powerful again, and it turns out that he somehow embedded a computer ship in Drake that slowly turned him into the Joker. Sure, why not?

In alternate universe comic “Batman: White Knight,” Batman gets frustrated by the Joker and force-feeds him a handful of random pills, which somehow (because of comic book logic) cures him of all his mental illnesses. Suddenly sane, Jack Napier goes on to sue Gotham City Police Department for his treatment when he was the Joker.

In “White Knight,” Harley Quinn (well, one Harley, as there are two) isn’t thrilled at Jack Napier’s rehabilitation. She becomes Neo Joker, obsessed with the goal of bringing the Joker back into existence, whatever that may take.

Here’s a version of the Joker that hasn’t aged well – and, indeed, it’s actually within the main DC continuity. Immediately after killing Jason Todd, one of the darkest moments in his history, the Joker somehow becomes the Iranian Ambassador to the United Nations. He then immediately attempts to blow everyone up with a bomb, because apparently nobody thought to give him a quick swipe with a metal detector.

In “Batman vs Teenage Mutant Ninja Turtles” (a real movie that you can actually watch) the Joker is mutated into a king cobra. Why? Because it’s fun, that’s why. Frankly the fact that this movie (and similar comic book) actually exists is reason enough.

Let’s be honest here: the character of the Trickster in the Flash comics is basically just the Joker with the serial numbers filed off. After all, he’s a wacky, zany supervillain who was played by Mark Hamill. The most prolific voice actor for the Joker, Hamill first played the Trickster in a short-lived “The Flash” television show in the ‘90s. That’s not the only time he played the character…

If Mark Hamill’s first turn as the Trickster didn’t look enough like the Joker, this was rectified when he returned to the role nearly three decades later. Appearing in a far more successful “The Flash” television show, this Trickster dresses and acts exactly like the Joker. What’s not to love?

Back in the Golden Age of “Batman” comics there was a supervillain named The Red Hood. At one point later on, it was claimed that this had been the Joker before his transformation into the Joker, and that falling into a vat of chemicals had bleached his skin white and driven him insane. Is this still canon? Who can even tell any more?

“The Dark Knight Strikes Again” is the long-awaited sequel to “The Dark Knight Returns,” and at some point between the two books, Frank Miller seems to have entirely stopped caring about he quality of his art. In the comic, former Robin Dick Grayson is driven insane - and also, for no reason, has the power to regenerate if hurt.