Amazing Inventions That Are Finally Bringing Us Into the Future

Camila Villafane
Amazing Inventions That Are Finally Bringing Us Into the Future January 13, 2021Leave a comment 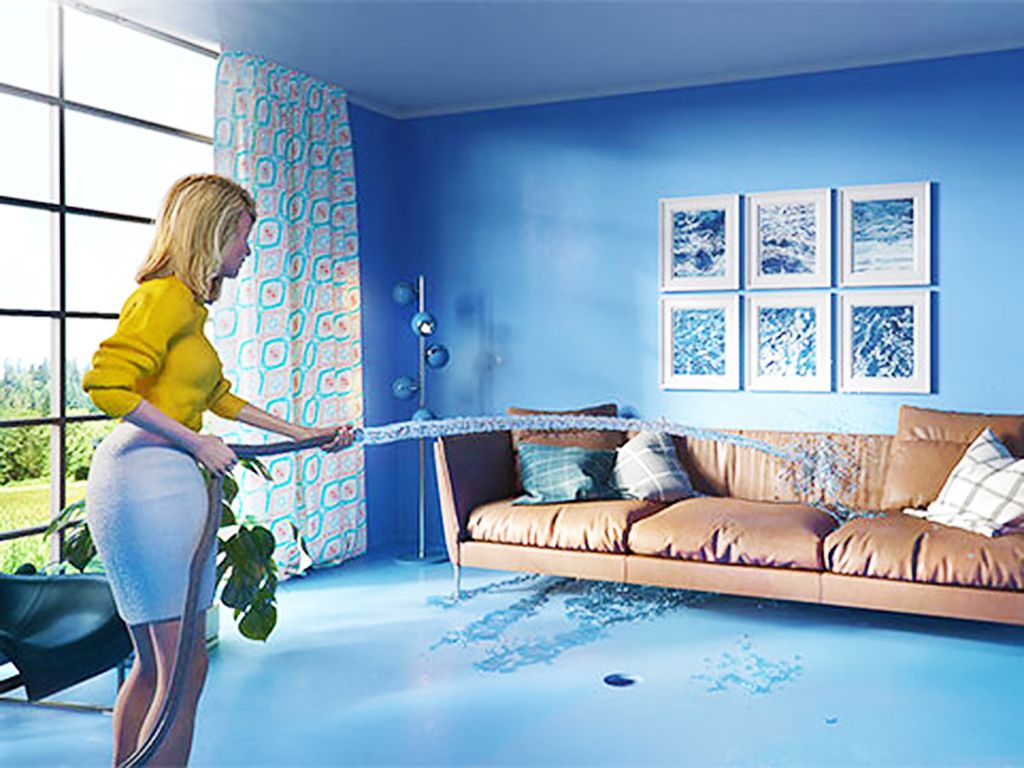 Technology is constantly improving. In fact, there are so many new gadgets and gizmos out on the market right now that it’s difficult to keep up. If you’ve ever wondered where all of the futuristic technology that was supposed to be available to use already is, just look around!

And, ironically, these items seemed like science fiction a couple of decades ago, but today, they are science fact and each of them are bringing us closer into the future, one invention at a time.

The Future of Newscasting

Sometimes when you're watching the news, keep in mind that newscasters are sometimes their own cameraman, sound team and makeup artist. That really puts into perspective how much work it takes to bring the news to you every night.

The Future of Hanging Out With Friends

The future of hanging out with friends might look a lot like this according to recent trends. People now have the ability to control robotic devices like these with just a smartphone or laptop, which makes traveling the world from the comfort of your own home possible.

No one who was around 20 years ago would have guessed how prevalent mobile phones would be in the lives of everyone around the world today. Some smart barber even invented these transparent hair cutting capes to keep their patients hair-free and happy while they're getting haircuts.

Finally, A Way to Cut Your Own Hair

As anyone who has been spending more time at home knows, cutting your own hair is not an easy task, especially when you have short hair. This guy managed to rig a system to make cutting his own hair possible that will have you asking, why didn't I think of that first?

This raincoat is genius because not only does it shield your body from the rain by channeling it outwards, far past your feet, it also allows your arms and legs to have complete and free movement, unlike other raincoats that can be constricting.

This Keypad is Constantly Randomizing

Never worry about anyone deciphering your key code ever again just by looking at which buttons you press. That’s because the MIWA Random Tenkey was designed to randomize the numbers on a keypad after every use. So, the digits will never be in the same location twice.

This Toilet Seat Has a Second Seat Built In

Most public toilets are designed for adults, but this particular toilet seat has a second seat that can be pulled down so that young children can sit comfortably and do their business without worrying about falling into the water.

The women of Taipei never have to wonder whether there’s a stall available in the public bathrooms thanks to this real-time bathroom display that indicates which stall is free and which one is occupied. Now this is one piece of technology that needs to make its way to the rest of the world.

This Cap Has a Fan Powered by Sunlight

This cap is so cool, and we’re not just saying that because it has a fan that keeps whoever wears it nice and cool. We’re saying this because the fan itself also has two circular solar panels that are used to power the fan’s motor.

While most people rely on their phones to give them the forecast, this hotel mirror by the elevators lets guests know whether the weather outside is nice and sunny or snowy, windy, rainy or cloudy before they go out to explore the city.

Raise your hand if you don’t like folding the laundry? We’re willing to bet that most people don’t, which is why the FoldiMate folding machine is so awesome. It actually folds the laundry for you and stacks them up nice and neatly.

This Pen Indicates How Much Ink is Left

This is no ordinary pen. It was designed to indicate just how many pages someone can write with the amount of ink that’s left. Alright, so it might not be magical or digital but it’s still a pretty nifty advantage to have.

A Microwave and Toaster in One

We all know how awesome microwaves are. Just place the food, set the time to cook for a few minutes, and voila! Instant meal. Toasters are also pretty handy, especially in the morning when making toast for breakfast. But this device is actually a microwave and toaster in one. Is that cool or what?

This Robot Suitcase Follows You Around

There’s nothing more annoying than pulling our own luggage because the wheels get stuck sometimes or the luggage gets jammed into the wall when one turns the corner. But this robot suitcase from Travelmate is a robot and actually will follow you wherever you go, completely hands free.

Who needs a garage when they can own an inflatable garage that acts as a shield against the elements, not to mention a powerful hailstorm? Yes, people! This is what thinkers in the 1950s envisioned the future to be like.

Who needs a selfie stick when they can own a pair of selfie shoes? That’s right! These shoes have a special compartment on the tip that allows someone to place their phone in it. Then, all the person has to do is kick their legs up and smile for the camera.

While it might not be everyone’s cup of tea, this transparent TV screen is very futuristic looking. One would just have to focus more on what’s on the screen and avoid being distracted by the real world on the other side of the screen.

A Watch Worn on Your Nail

Want to really knock people’s socks off? Then wear on a nail watch from Timex. This device allows the wearer to look at the time, the date, and even offers a color option so that the characters are displayed in different colors.

Humanity has showered with a showerhead over their heads long enough. It’s time to try something new like this circular shower that has jets that spray a person’s body from the sides as well as the top.

A Backpack Chest Strap With a Whistle

This backpack from The North Face brand has a unique chest strap that has a second function. It’s actually a whistle, so someone can alert others when they are in distress. Now, that’s one travel hack we can all get onboard with.

The mirror in this changing room offers different light settings like evening, office, and outdoor. That way, a shopper can try on their clothes and check out how they look in different lighting before they buy an item.

Use the Force With these Lightsaber Chopsticks

These lightsaber chopsticks are a must have for any “Star Wars” enthusiast as they eat their Chinese take-out. They can even eat at a restaurant and whip these babies out. We’re sure the other patrons will be dazzled by them.

Cans That Are Resealable

These cans take recycling to a whole new level as they are reusable and resealable. Once they are filled up again, simply pull the tab up, slide back, and you’re done. It’s that easy! Also remember that cans are a more recyclable alternative to plastic bottles.

A Mouse With a Built-In Calculator

A computer mouse is pretty handy on its own, but this one goes the extra mile by having a built-in calculator. We imagine that a lot of accountants and bookkeepers find this little gadget extra useful, especially around tax season.

This Hair Clip is Multifunctional

Think of the MTA Hair Clip as the Swiss Army Knife of hair clips. Alright, so maybe it doesn’t have as many functions as a Swiss Army Knife, but it does have a wrench, serrated knife, and a ruler on the clip.

This Hotel Has a White Noise Machine

This Hilton Hotel implemented the LogiSon Sound Masking technology in their rooms. Essentially what this does is create white nose that can be adjusted so that it creates a soothing ambiance in the room and blocks out any unwanted external noises.

This Air-filled Pillow for Hats

When this customer ordered a Spider-man themed hat, the company wanted to make sure that the 3D emblem of the spider in the front didn’t get damaged during shipping. So, they placed it inside an air-filled pillow so it would arrive safely.

This Chocolate Bar is Divided Unequally

Not only is this chocolate bar divided into unequal parts, but it has measurements in each block, so the person will know just how much chocolate they are consuming. These measurements come in handy, too, when a recipe asks for a specific amount of chocolate.

Who says one can’t take their cat on a backpacking trip through the wilderness? This cat backpack is a cat enthusiast’s dream come true as they can now carry their beloved feline with them whenever they are out and about.

This Shower Speaker Runs on Water

This Bluetooth shower speaker not only fits perfectly on the showerhead nozzle, but it is also powered by a technology called a micro-hydroelectric generator. Essentially, it runs on water, so no batteries are required to listen to some tunes while taking a shower.

Sure, the iPod Shuffle itself isn't very futuristic, but wouldn't it be incredible to have headphones that weren't as easy to lose as Air-pods? This person made this life hack for themself, just so they could flex their futuristic device against everyone else's normal headphones.

It's more important now to stay safe from germs and contamination than it's ever been before, so this Chik-fil-A patron was very happy to see a hands-free handle in the restroom at the establishment. That will keep the door free from any germs that may be on a person's hands after they use the restroom.

An Easier Way to Mow

Just call this guy George Jetson, because he's far ahead of everybody else! He climbed onto his Segway and started mowing the lawn like it was nothing, proving that there are easier and more futuristic ways to do things than we realize.

This type of stilts, known as jumping stilts, allow their wearers to run up to 20 miles per hour and leap and bound across walkways with ease. Sure, they take some getting used to, but once training is done a person wearing these can out walk any mere mortal.

Sometimes the best inventions seem so obvious only after they have been invented. This guy is an absolute genius for finding out a way to get his pup to relax while getting his nails trimmed, which is no easy task for many dog parents.

Dogs have long served alongside their human counterparts on police forces and in the army, but they seldom had as much physical protection as the people they served alongside. Now, that is a thing of the past and it's not uncommon to see well protected canines doing important jobs.

It might seem like an obvious idea, but it takes some real mastery to accomplish saving your eye makeup while washing your hair. This girl realized that by putting on goggles, she could do both and the results were perfect.

This isn't the safest way to board the train, but this kid is really thinking far into the future by creating his own seat on the vehicle. He also chose the most commanding spot on board despite the fact that many other seats were still open.

Keep Your Head Up

It may be easy to judge this man for his strange hat device, but hey, you didn't think of it first! We all get tired on the bus and this guy found out a way to make that a bit more bearable, so kudos to him!