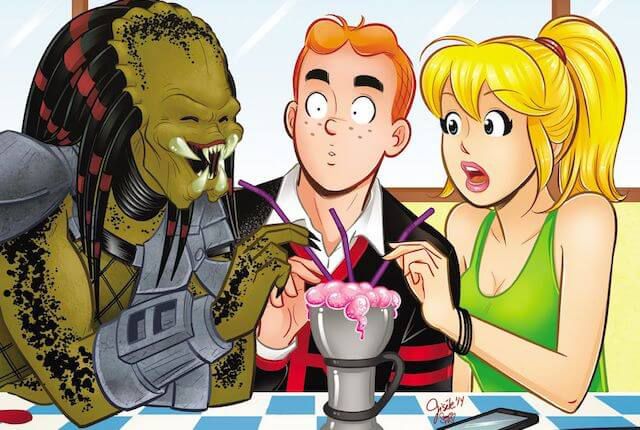 Anyone who’s caught an episode or two of the CW’s “Riverdale” knows how out-there the stories of Archie and his friends can be. But have you taken a look  at the series' source material? If so, you know “Riverdale” isn't even near the level of craziness Archie comics achieve. Part of that comes down to the number of truly bizarre crossovers the comic has had with other franchises. Sure, you may already be aware of the likes of a certain teenage girl with actual magic powers. But how about Archie’s run-in with Sharknado? These are the craziest Archie crossovers through the years.

“Crossy Road” is an 8-bit style mobile game in which players try to get a chosen mascot across a road without dying. In 2015, the game’s developer, Hipster Whale, created Archie and Jughead as unlockable characters. So if you’re really into seeing Archie flattened by a big rig, you can.

Okay, so we already kinda knew about Sabrina, but we still think it’s a little odd that there just happens to be a magic-wielding teenager in Riverdale. She’s also the very first weirdo Archie ever crossed over with (starting back in 1962), so she pretty much sets the tone for everyone else here.

We can guarantee there’s more than one pre-teen out there who’d love to spend some time with their favorite video game character, and in Archie’s world, he and his friends get to do just that. Because a speedster hedgehog totally fits in. With a bunch of midwestern teens.

One of the great things about comics is they can just throw characters into parallel universes without anyone so much as batting an eye. In the “Super Teens” crossover, Archie and friends become just that: teens with superpowers. We wouldn’t mind super strength, but a head/drill combo? Hard pass.

Well, we’ve already got witches, superpowers, and video game hedgehogs, so why not also throw in a few heroes in a half-shell? You gotta figure at least the food is good. Would you turn down free pizza? We didn’t think so.

There are literally dozens of Archie offshoots, and one of them is “Little Archie,” wherein the characters are kids. There’s also a “Teen Titans” spinoff called “Tiny Titans,” which is… the same thing. So this is kind of a no-brainer, especially if you love kids. And who doesn’t love kids?

You can thank Jughead and a future Archie descendant for most of the stories from Arthurian legend. See, because Jughead has the ability to time travel in this crossover, and he spends it being chased by a time cop named Morgan le Fay. Yes, THAT Morgan le Fay, and she is definitely not a witch.

Archie and his pals show up in this comic series as a result of one of its characters selling his soul in exchange for a Chromium edition comic book. It’s a true cautionary tale for the kiddos: no matter how cool a comic is, it’s never worth your soul. Unless it’s “Detective Comics #27.”

Zombies may not be the most original plot device out there these days, but props to “Archie” for bringing in Cthulhu and having Sabrina the Teenage Witch offered up to him as his bride. You want to talk originality? This is must-read material, people.

One thing we’ll say for “Archie” comics is that they’re not afraid to take risks. Like killing off their main character, for instance. Okay, so Archie continues to exist in at least one or two of his billions of parallel universes, but still. It’s kind of sad to see him go so violently.

While the “Archie” crew have never transformed into “Peanuts” characters or anything (how do we make that happen, though?), in a December 1967 issue of “Betty and Veronica,” a poster of the Charles M. Schulz comic is featured. We’re guessing they must have just watched “A Charlie Brown Christmas.”

In another parallel world story arc, Archie and gang are accidentally mixed up with the world of TV singing series “Glee.” The only way to save both worlds? Song. Makes us think of that Band Aid 30 song, “Do They Know It’s Christmas?” We’re pretty sure that one saved this world, too.

Apparently, Archie just isn’t enough of a badass on his own, so in 1994, he teamed up with Marvel vigilante Frank Castle, presumably to fight injustice sans regard for human life. Kind of like that whole Red Circle storyline this season on “Riverdale,” only not at all. Definitely more guns, though.

“Sesame Street” is every child’s go-to for fun education. Who here can say they didn’t learn a thing or two about numbers from Count von Count? Well, Archie’s friends are all about learning, too. Especially Jughead, who once helped kids learn everything they needed to know about the letter J.

Kevin Keller is Archie’s resident gay, so of course his crossover would have to include actor and gay activist George Takei. You think that since he’s already been featured in the comics, George would be willing to do a spot on “Riverdale?” He would make an excellent third season villain. Oh, my…

So Predator follows Archie’s gang back from their spring break trip and starts doing… exactly what you’d expect Predator to do. It’s funny that the “Archie” creators thought this up in the first place. Funnier still that Predator’s motivation for murder was a crush on Betty. She is pretty cute, tbh.

Here’s a fun idea: what if President Barack Obama and Sarah Palin go head to head in a political arena, but at a high school? Endless laughter, right? Right?

KISS is one of those musical acts that no one outside of midwestern ex-groupies really takes seriously. Shit, we’re not even sure if they take themselves seriously. So this “Archie” crossover actually makes perfect sense, even if it portrays KISS members as supernatural monster fighters.

Shark-filled tornados? Check. Jughead biting sharks back? Check. Tara Reid and the Pussycats? Sign us the f— up.