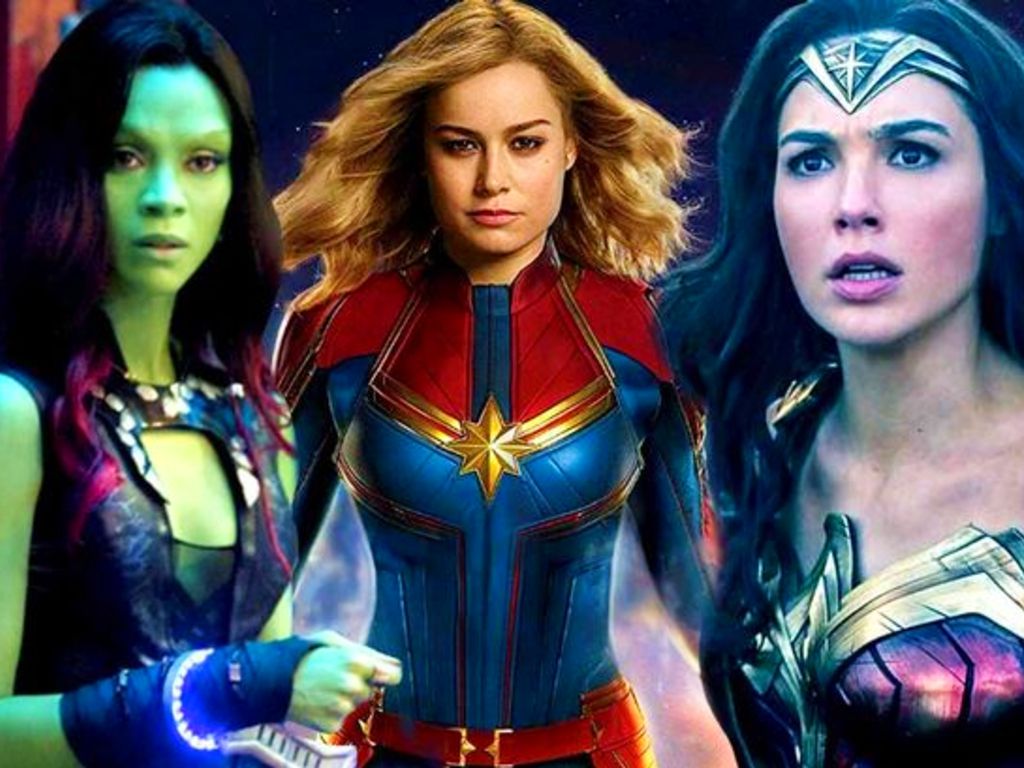 Female superheroes are making a huge resurgence on the big screen nowadays and we are all for it. There are a lot of great women that know how to kick butt and save the day. But there are also some duds who should hang up their capes and step aside. Here's our picks for the best and worst female superheroes.

After a string of duds and critical flops at the box office, the DC Universe was barely treading water until they finally made a Wonder Woman movie. Wonder Woman is one of the most well known and greatest female superheroes. She is half God so she is nearly indestructible and don't knock her lasso of truth until you're caught in it.

Natasha Romanoff or Black Widow may be a huge asset to the Avengers but honestly, she'snot the best female superhero. She doesn't have any powers but she is skilled in all forms of fighting from martial arts to gymnastics. Still, those physical skills can't really compare to the superpowers of the other heroes on this list.

The Wasp is a part of the Ant-Man and Avengers universe. She basically has the same powers as Ant-Man; thanks to her suit she can shrink or get huge and she can also fly with her built-in wings. While Ant-Man did help save the day in 'Endgame,' the Wasp was Thanos'd. Without her suit she isn't much of a hero and unfortunately that makes her one of the worst.

"Jessica Jones" is a popular Netflix show based on the superhero that accidentally became a superhero. After she came in contact with some chemicals and suffered being in a coma as the result of it, Jones emerged with the ability of superhuman strength, flight and the power to block mind control. We'd also say she's one of the best heroes here because she doesn't have to wear any fancy spandex costumes. Jones just throws on some jeans and a leather jacket and she's ready to kick butt.

Though Harley Quinn isn't necessarily a hero she isn't always a villain either. She doesn't have any powers but she was injected with a special toxin antidote by Poison Ivy that makes her immune to certain chemicals and gives her the skills of enhanced strength and durability. She's kind of a loose cannon and while there is a standalone Harley movie coming out next year, we're not sure if she's even that great yet.

After Wonder Woman proved to be such a big hit, the Marvel Universe decided to finally make their Captain Marvel film which was also a whopping success. Captain Marvel is a human named Carol Danvers, who was once an air force pilot. After participating on a secret mission, she gets superhuman powers by accidentally absorbing them via a photon during a war with aliens. She is nearly indestructible and actually ends up saving most of the Marvel Universe in "Avengers: Endgame."

Yes, Squirrel Girl is a superhero that actually does exist. She is a mutant with no squirrel biting story, unfortunately. She has many powers similar to squirrels which are as weird as you think. She has superhuman strength and agility, which allows her to leap several stories, as well as an enhanced sense of smell. She also has 2 - 3 inch retractable knuckle spikes that can slice wood, in addition to sharp claws on each digit that can be used for climbing. She can also communicate with squirrels. What does she use these powers for? Thankfully, beating up Deadpool.

X-23 is the clone of Wolverine who became his adopted daughter. Her storyline is highlighted in the movie "Logan." She has all of the superpowers that Wolverine has including his retractable claws. Although she's just a kid, she can surely kick anyone's butt.

She-Hulk is the cousin of Hulk. After receiving a blood transfusion from her cousin, Jennifer Walters received the Hulk's powers and the ability to turn into a green, mean fighting machine. But, she is still able to retain her personality while she is green, which is a huge step up from her male counterpart. Disney is currently producing a She-Hulk series for their streaming service, so we'll soon see if this hero can redeem herself.

Supergirl is Superman's cousin and she is also pretty powerful. Her powers include: unlimited superhuman strength, speed, stamina, invulnerability, flight, super breath, x-ray vision, telescopic and microscopic vision, freeze breath, heat vision and super hearing. Since 2015, there has been a wildly popular "Supergirl" show on the CW so perhaps there's a movie in her future!

Katana made her big screen debut in the "Suicide Squad" film, but she is a heroine, not a villain. She is a samurai warrior and her husband's soul is actually in her sword, aptly named 'the Soultaker.' It seems like she needs that sword as she doesn't have nearly as many powers as the other superheroes on this list.

Scarlet Witch is one of the Avengers but sadly, she is a lesser known one of the bunch which is a shame because she is arguably one of the most powerful. She is daughter of Magneto and sister to Quicksilver, making her able to manipulate chaos magic which gives her the ability to bend reality at her will.

Rogue is a part of the X-Men series and she is a mutant. Unfortunately, Rogue's powers are involuntary, simply by touching someone she can absorb and sometimes remove the memories, physical strength and superpowers of anyone. This power goes a long way and without much reason she can even kill people normal people. Her power is more of a curse than an asset to her, and even though it does help fight those bad guys, we would not want to have it.

Jean Grey goes by several other names in the comics and movies she appears in, including: Marvel Girl, Phoenix and Dark Phoenix. She is another mutant member of the X-Men. Her powers are telekinesis and telepathy— similar to Professor X. After a space mission she came in contact with a powerful substance and became the villain Dark Phoenix. Still her powers are one of the strongest of the X-Men and under any of her aliases she kicks butt.

Spider-Gwen made her silver screen debut in "Spider-Man: Into the Spider-Verse." Her character was only created in comics in 2015 but she quickly became a fan favorite. She lives in a different universe in which Gwen gets bit by a radioactive spider, not Peter Parker, so she has all of Spider-Man's abilities. A female Spider-Man is pretty lazy storytelling, but I'd rather see Gwen than Tobey Maguire in "Spider-Man 2."

Storm is one of the X-Men and some argue that she is one of the strongest. She posses the ability to change the weather from lighting to tornados as she pleases. She can even mess with oceans, cause tsunamis and use those powers to mess with everyone around her. Storm appeared in both X-Men movie series and even the television show. Being one of the most powerful mutants, she is definitely one of the best female superheroes.

Kitty Pryde is a member of the X-Men and a mutant. She possesses a phasing ability which means she can pass through walls and objects she touches become intangible. She has popped up throughout several X-Men movies usually portrayed by Ellen Page. While it is a great defense it pales in comparison to the other superheroes on this list.

Valkyrie lives in the world of Thor and, at least according to "Avengers: Endgame," she ends up ruling Asgard, replacing Thor. She is an Asgardian and therefore immortal. Her powers are strength, speed, endurance and resistance to injury. She's portrayed by Tessa Thompson in the Marvel movies who absolutely crushes it.

Batgirl has many different identities throughout the comics and films she appears in, which include the panned "Batman & Robin" film. She most notably had the alter ego of Barbara Gordon, Commissioner Gordon's daughter. While she is great at fighting crime, she kind of just followed in Batman's footsteps while lacking the superpowers and billions of dollars that Batman had.

Negasonic Teenage Warhead is also an X-Men mutant, can you guess her power? Her name kind of states the obvious, as her power is the mutant ability to detonate atomic bursts from her body. She can also harness, generate and absorb radioactive energy into herself, which lets her fabricate objects out of thin air like clothes or shelter and levitate people or objects with her mind. She also appeared in the Deadpool films but none of the X-Men movies, yet.

Starfire is most known for her role in the Teen Titan series. She is a part of the DC Universe, though. She has a crazy amount of powers which include superhuman strength, agility, speed, survival in space, longevity and decelerated aging. Similar to Superman and Supergirl, she is from another planet and pretty powerful.

Elektra was a spinoff of the "Daredevil" comics and film. The movie was a big flop. Many people may say it was because it was before the superhero hype but seriously, it's not the best movie. Elektra is not very electrifying as a superhero either, she is a skilled fighter but she doesn't have any superpowers and mostly just exists to be the love interest of Daredevil.

Black Canary is a part of the DC Universe. Hollywood has put her on screen (the small one) with a recurring role on the "Flash" series on CW. Her superpower is the "canary cry" which sounds weak, but this yell can shatter metal so don't knock her, she's pretty powerful.