Celebrity Cosplay Moments That Blurred the Line Between Real and Fantasy 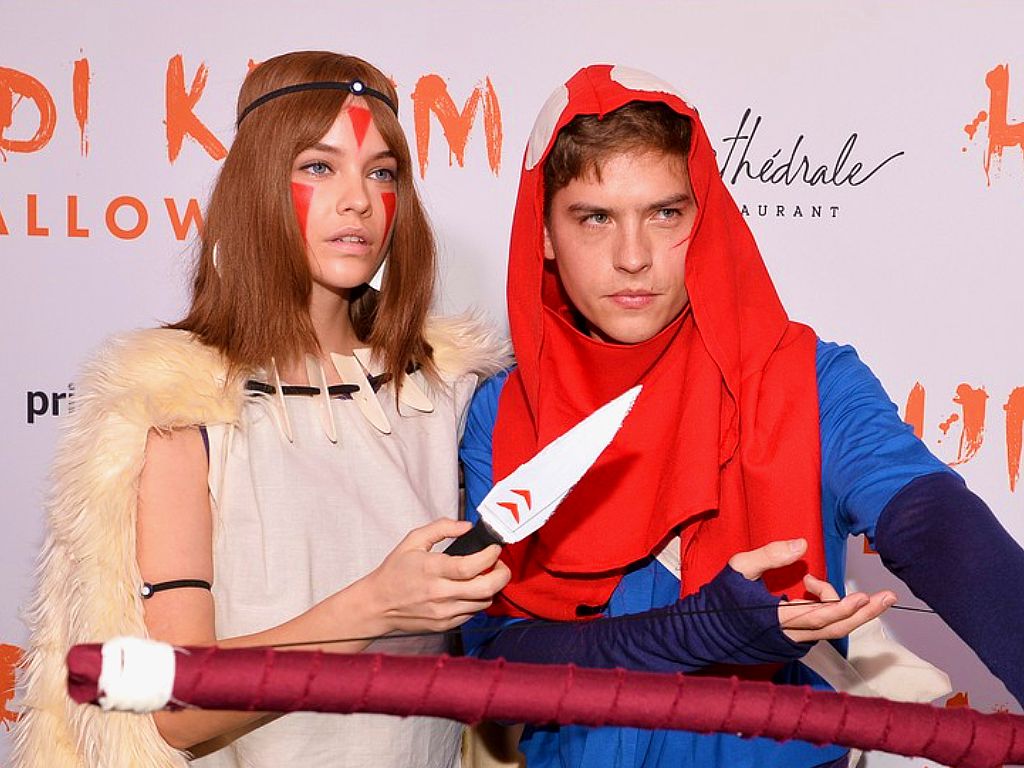 The art of cosplay has taken the world by storm, allowing ordinary fans to embody extraordinary characters and bring them to life. Over the years, many celebrities have come to embrace this latest form of dress-up and have displayed their own creative costumes. Below is a line-up of some of the best cosplay moments from celebrities.

A true master of disguise, Bryan Cranston roamed the convention halls of San Diego Comic-Con in 2013 completely hidden underneath a realistic Heisenberg mask. Assuming he was just another fellow "Breaking Bad" fan, many cosplayers were stunned when he revealed himself during a panel for the show. The "hyperflesh" mask, created by Landon Meier, cost $3,000 to make and succeeded in fooling those lucky enough to sneak a selfie.

Best known for her roles in "Castle" and "Package Deal," the actress and model's likeness served as inspiration for the "Resident Evil" video-game character Jill Valentine. After receiving a custom-made beret created by a fan, Voth decided to cosplay as Valentine and do a series of photoshoots as the character. The model's Instagram (@juliavoth) features some shots taken at WonderCon 2016.

Donning a Pink Power Ranger costume, the "Black Panther" actress danced her way down the halls of the 2013 San Diego Comic Con in a series of videos posted on her Twitter account (@Lupita_Nyongo). During her second day at the convention, she wore a Kylo Ren mask much to the delight of "Star Wars" fans.

No need for a Polyjuice Potion here! The "Harry Potter" star cleverly disguised himself among the muggles as the friendly web-slinger during the 2014 SDCC while promoting his film "Horns." With his face completely covered, Radcliffe took the disguise to another level by adopting an American accent to further fool the convention's attendees.

Mark Hamill as a Stormtrooper

In 2018, the "Star Wars" actor decided to forgo his Jedi mind trick abilities and instead wandered the convention floor incognito as a Stormtrooper. Hamill documented his escapades on his Instagram (@hamillhimself) which included a to-do list of collecting a rare comic book, grabbing his son's autograph, and finding "the perfect nacho."

The "Supernatural" star is no stranger to the world of cosplay, having portrayed a wide-range of characters including Carl from "Up," the Incredible Hulk, Goku from "Dragonball Z" and Rapunzel from "Tangled." Perhaps his most beloved rendition is of the patriotic Avenger himself, photographed above by Stardust and Melancholy Photography.

The former "The Hills" star stunned convention-goers at the 2014 San-Diego Comic Con by dressing up as Mystique. Donning a red wig, white outfit and green contact lenses, Patridge documented her transformation into the blue shapeshifter on Instagram (@audrinepatridge) at the hands of talented make-up artist Cig Neutron from "Face-Off."

Best known as brooding demon hunter Dean Winchester on "Supernatural," actor Jensen Ackles cosplayed as the vigilante for Halloween 2018. Since voicing the character in the 2010 animated film "Batman: Under the Red Hood," fans have been dying for a live-action interpretation to hit the big screen with Ackles reprising the role. For last year's Halloween costume, Ackles tackled the Dark Knight himself in a series of dynamic shots photographed by costume and prop designer Stef (aka @arachnobite on Instagram).

During the 2013 San Diego Comic-Con, Hiddleston surprised fans by stepping out onstage in his Loki costume. The audience erupted with applause and cheered his name before the trickster god raised a finger to his lips demanding silence from the audience. The special appearance was conceived during a phone call with Marvel Studios' Kevin Feige two weeks before the event.

The "Man of Steel" actor decided to prank his fellow DCEU stars by donning a "V for Vendetta" mask and asking for a selfie with Will Smith during his promotion of "Suicide Squad." Cavill uploaded a video of the incident on his Instagram (@henrycavill) which showed him wandering the convention hall and posing for pictures with convention-goers (unaware that it was Superman behind the mask), before asking for a selfie with Smith. Turning to thank what he assumed was just another fan, Smith was surprised to see Cavill's face staring back at him and laughed, realizing he'd been fooled.

"Victorious" actress Victoria Justice stunned her fans with her hot take on Michael Keaton's famous character. Her sleek look and bold makeup made this costume a success when she dressed up as the spooky character back in 2016.

Kim Kardashian always gives her all when it comes to fashion, and there is no exception when it comes to cosplay! She doesn't only wait for Halloween to put on some incredible costumes. Some of her best looks have included Wonder Woman, Cher and Elle Woods from "Legally Blonde."

No one loves cosplay more than "Attack of the Show" host Olivia Munn! She showed up to San Diego Comic-Con as one of her favorite anime characters, Sailor Moon, in 2011. This wasn't her first time wearing the costume as she donned the same outfit to a comic con appearance a few years prior.

"The Walking Dead" actress confirmed her return to the show for season 11 during last year's New York Comic Con in a truly unexpected and terrifying way. Creeping on her cast-mates during a panel, she sat in the audience dressed in a make-shift Negan costume while wearing a "Jason" mask. One would assume having faced off against the undead, the actors wouldn't be afraid of an innocent prank but all of them revealed they were "scared" by the off-putting encounter before feeling relief and excitement about the surprise announcement.

Will Ferrell as Megamind

Funnyman Ferrell treated Comic-Con audiences in 2010 by appearing as his blue alter-ego to promote "Megamind." Sporting a black cape and blue face paint, the comedian delighted the crowd with his humor by trolling cast member Brad Pitt with a cardboard cutout of the actor. Accompanied by his co-star Tina Fey, the two made guest appearances as live-action versions of their characters during the Today Show's "Spooktacular" episode.

To promote "Despicable Me 2," Steve Carell appeared on "Ellen" in 2013 dressed as the film's iconic villain Gru (sans the Minions) and danced in the aisles to the song "You Should be Dancing," which was featured in the film. To get into character, Carell wore a bald cap and fake nose along with the character's signature scarf and black suit. During the interview, he spoke about his "delightful" daughters and commented on how he doesn't approve of his eldest daughter Margot's interest in boys.

After attending a "Game of Thrones" panel for the 2018 SDCC, Anderson hit the convention floor dressed as Miles Morales. In his excitement, the actor tweeted he felt "amongst my people." When it comes to fan-casting for a live-action interpretation of the character, the "GOT" alum is featured on a variety of lists.

As if playing the wall-crawler in real-life wasn't already a dream come true for Andrew Garfield, the actor gave a heart-warming speech about his love for the character in front of fans at the 2011 SDCC. Dressed head-to-toe in a less-than "amazing" costume, Garfield stunned the crowd when he approached the microphone and took off his mask. Garfield called the moment "the most incredible day" of his entire life.

In the 2009 movie “Fanboys,” Kristen Bell showed that she was a true nerf-herder by donning this Princess Leia outfit. The movie also had cameos from “Star Wars” like OG Princess Carrie Fisher and Darth Maul himself Ray Park.

The WWE star makes a habit of incorporating cosplay into his wrestling routine. Outside of the ring, Xavier and some of his fellow fighters dressed up as characters from "Black Panther" for the 2018 Awesome Con. In the picture above, Woods is dressed as Killmonger with Kofi Kingston as T'Challa and Big E as M'Baku. The crew has also heavily relied on nostalgia when creating their costumes, having teamed-up to portray iconic X-Men characters at the 2019 Big Easy Con in New Orleans and dressing as the IIconics at DragonCon.

The 6-foot-11 NBA player roamed the floors of the 2015 San Diego Comic Con ready to strike as the alien bounty-hunter Predator. Social media posts show the basketball player taking selfies with convention goers, answering interview questions and even posing for a picture with a dog on a motorcycle.

"The Lord of the Rings" director decided to clown around the 2014 San Diego convention disguised as a black and white jester and took pictures with fellow cosplayers. Jackson then ditched the costume in time to promote the third installment in "The Hobbit" franchise during a Warner Bros. panel.

Attempting to blend in amongst the crowd at the 2013 SDCC, the "Doctor Who" actor wore a Bart Simpson mask and tried to mingle with his fellow Whovians. BBC America camera crews documented the awkward encounters which included strange looks and one-sided conversations as Smith tried his best to provoke reactions from an oblivious crowd. Sorry Sweetie, better luck next time!

Known in the DC universe as the voice of Harley Quinn and Batgirl, actress Tara Strong wowed 2016 SDCC audiences with her "Batman: Arkham" inspired costume. Dolled out in a leather bustier and blond wig, Strong walked the convention grounds and even dined out in costume without being discovered by fans.

For the 2015 premiere of "Star Wars: The Force Awakens," the actor demonstrated his alliance toward the light side of The Force by dressing up as Yoda. Donning green face paint, a bathrobe and sneakers, Gordon-Levitt took selfies with the crowd in Los Angeles and proved a massive nerd, he is!

During the promotion of "Fantastic Beasts: The Crimes of Grindelwald," the actor stunned fans at the 2018 SDCC by dressing up as Toadette from the Super Mario Brothers video-game. Last year, during a "Justice League" panel, Miller dressed up as Edward Elric from "Fullmetal Alchemist."

Known for his appearances on "Doctor Who," "Torchwood" and throughout the Arrowverse, John Barrowman has delighted audiences with his action-packed heroics. As the host of the 2016 Eisner Awards during San Diego Comic-Con, the actor surprised audiences by appearing throughout the night in three different cosplays. Starting out as Zapp Brannigan from "Futurama," he then went nuts as Squirrel Girl before ending the night as villainous vixen Harley Quinn. Throughout the years, the performer has cosplayed characters such as Princess Leia, Wonder Woman, the Tardis and most recently as Captain America in 2018.

Adam Savage as "The Revenant"

"Mythbusters" host and cosplay fanatic Adam Savage is truly a master of costume-making and has stunned audiences with his various character creations including No-Face from "Spirited Away," Totoro, the Rocketeer, the Twins from "The Matrix" (accompanied by Alton Brown) and many more. In 2016, Savage stormed the convention floor as none other than the bear from "The Revenant" dragging the lifeless (dummy) corpse of Leonardo DiCaprio clutching onto his Oscar. The completed costume, comprised of steel corset boning and fur bought on Amazon, only cost $200.

Stephen Colbert as a Hobbit

For the 2014 "The Hobbit" panel at San Diego Comic-Con, the comedian and talk-show host displayed his love for "The Lord of the Rings" by donning a Middle Earth costume. Colbert made a surprise cameo in "The Hobbit: Desolation of Smaug" and was featured in an Entertainment Weekly spread where he got to dress up as iconic characters from the series. In 2016, Colbert crashed the Republican National Convention by dressing up as Caesar Flickerman from "Hunger Games."