Here Are All The Funniest And Best Robot Characters From “Futurama”

Jimmy Pember
Here Are All The Funniest And Best Robot Characters From “Futurama” March 29, 2018 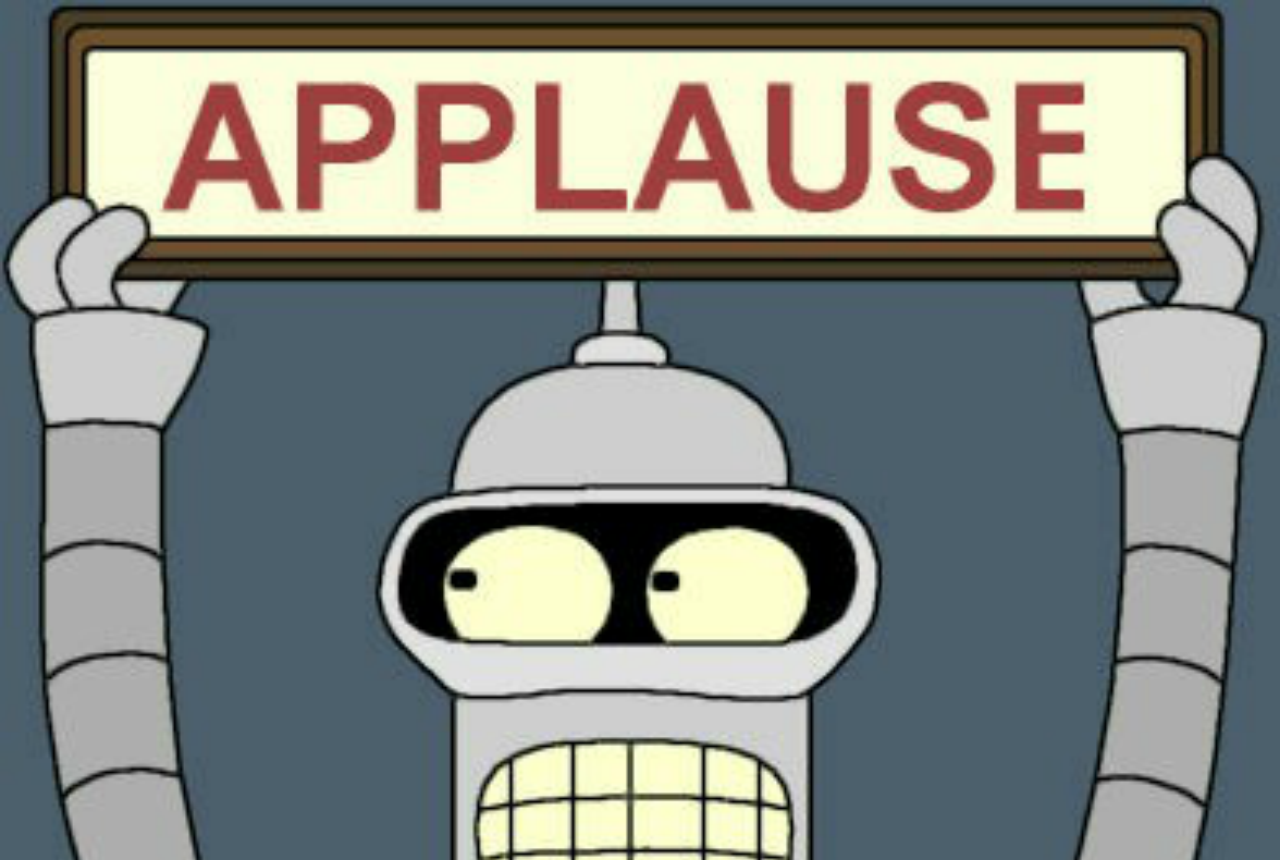 From the booze to the blackjack to the hookers, Bender is easily the wackiest robot on Futurama. It almost goes without saying. But the classic animated sci-fi/comedy series is almost bursting at the seams with other big-personality automatons. And, quite frankly, we think there are a few other 'bots from the show that deserve more recognition from the show's fans for their unique brand of wackiness. In fact, some of these other robots are even funnier than Bender. (Search your feelings; you know it to be true.) So here's a roll call of all the best Futurama robots from the whole series.

When Bender goes to Mars University and rejoins his robot frat, he takes the portly Fatbot under his wing (or at least as much as he can fit). Fatbot is prone to nervous eating, which often lands Robot House in hot water. When he ate the Dean’s prized ship-in-a-bottle, the frat ended up on dodecatuplesecret-probation and competed in a regatta race against Snooty House for their fraternal freedom.

URL is the robot cop of the Futurama universe. He’s completely committed to his job and enjoys nothing more than wailing on a perp with his nightstick. He does sometimes display a sensitive side as well though, and is often more “human” than his actually human partner. His catchphrase: “Awww yeahhh.”

Enemabot, as its name implies, delivers piping-hot enemas to the Planet Express team, whether they want them or not. Of all the weird, gross robots in the year 3000, this one just might be the single weirdest and grossest of them all. At least he’s always got a smile on his face!

Boxy is the sometimes-rival, sometimes-counterpart to the brilliant robot actor, Calculon. On the soap opera "All My Circuits," Boxy can often be seen in the background, objecting to weddings and other events with his telltale backing-up beep. Few robots can say so much with so little, and that's why Boxy always steals the scene.

This paper pipsqueak is more devious than you’d think. At first glance, it looks like a harmless cutesy musical mother’s day card. But when the Robot Revolution starts, this little guy spits out nothing but sour notes, maniacally encouraging its fellow automatons to kill every last human. Luckily he’s sent to the big recycling bin in the sky before the uprising can come to a climax.

When Bender joins the robot wrestling league, one of his first opponents is the Foreigner. He’s got a matador’s suit, a massive green passport, and taunts in the vein of, “I’m not from here! I have my own customs!” It really gets the crowd angry, and Bender quickly ejects him from the ring. But the Foreigner will always have a home in our hearts.

The Crushinator is the third robot daughter of a human moon farmer. When Fry and Leela seek shelter for the night at his farm, Bender gets them in trouble by canoodling with the ladies. Two out of three, anyways – as he mentions, the Crushinator is so fine, she “has to be romanced first.” She later goes on to compete in the Miss Universe pageant, losing to a shapeless amoeba.

The Donbot is the leader of the Robot Mafia. He sounds a lot like Marlon Brando in “The Godfather,” and he helms his mechanical mob with an equal amount of gusto. He’s quick to dispatch his strongman Clamps to do his dirty work, but no android rocks a fur coat quite as hard as the Donbot.

Calculon is a beloved robot actor and the star of soap opera “All My Circuits.” More hammy than a Denver omelette, he chews the scenery like it was his primary function. He’s always good for a misplaced Shakespeare quote, and he lends that special theatrical gravitas to everything he does. In our hearts, the Academy Award will always go to…Calculon!

Flexo is Bender’s identical twin bro-bot. He’s only got a couple of distinctions 1) his magnetic, removable goatee, and 2) his generally pleasant, friendly attitude. Though he does often land a mean put-down, he pretty much immediately follows up with a “just kidding.” The real Bender wouldn’t ever waste his exhaust, so it’s an easy way to tell the two apart.

The Robot Devil makes several appearances across the Futurama series. He plays the fiddle, and will engage any contestant in a fiddle contest at their request, though he’s most easily foiled through good old-fashioned violence. He’s also a wonderful singer. No surprise, seeing as he’s voiced by the ever-versitile Dan Castellaneta, AKA “Homer” from "The Simpsons."

Hedonismbot lives completely for himself and the endless fulfillment of his insatiable pleasures. He’s always eating from a bottomless bowl of grapes and turns up at all the best parties. You never have to wonder where you stand with Hedonismbot – if you’re doing something that pleases him, you’ll always be on his good side.

Roberto is Bender’s partner in crime, but he’s totally bonkers. His unpredictability can make him a real liability, especially because he’s the king of the double-cross. He’d sell out his partner for pennies as soon as he’d stand beside him, guns blazing, Butch and Sundance style. His favorite weapon is his stabbing knife.

Fender is a talking guitar amp who first introduces Bender to “jacking on.” That’s when a robot intentionally gives itself a jolt of electricity in order to get high. Bender ends up so addicted he joins the church of Robotology for help, promptly quits, and goes to Robot Hell. Now that’s some nasty feedback.

Destructor does what his names says -- he destructors! When Bender is forced to fight the goliath in the robot wrestling league, his end is nearly certain. Luckily, Leela steps in and discovers Destructors secret controller. It's none other than her old mentor and rival, and once she beats up the wizened old fly-man, Destructor falls like a house of cards. Checkmate!

iZac is the awesome robot bartender with the red bowtie and the infinitely quotable catchphrase, “You got it!” He even maintains his cheery disposition after ejecting a drunk Bender from his establishment. His voice is pure silky smooth, and we bet he could probably whip up a mighty fine Pan Galactic Gargle Blaster.

Kwanzaabot is a robot often found with Robot Santa and the Hanukkah Zombie. During Kwanzaa, he flies around the planet passing out literature about the holiday, but after almost 700 years he’s frustrated that no one seems to know about it. He’s a good guy though, and busts the fattest rhymes of the holiday bunch, not to mention rocks the sickest threads.

Clamps is one of the Donbot’s top enforcers. He makes ample use of his trademark clamp-hands at every opportunity, no matter how inappropriate. He also has the shortest temper of anyone in the Robot Mafia and is quick to fly off the handle. When he’s in a bad mood, you better watch out, or you just might get clamped!

The Mad Hatter Robot lives in the asylum for criminally insane robots. It follows, then, that he is quite mad. Like the Mad Hatter from the Lewis Carroll books, he commands an endless tea party and orders everyone to switch seats at random intervals. Fry gets knocked about in the process, driving him further and further to the brink of his own sanity.

Robot Santa Clause, voiced by John Goodman, is about as far from the regular Santa as you can imagine. Every X-Mas, he flies all over the world waging full-on war against the naughty with lasers, bombs, and bullets. Too bad everyone is on his naughty list in the year 3000. Not much can warm this robot’s cold mechanical heart.

Malfunctioning Eddie is a robot who sells used cars – at prices so low, he must be malfunctioning! It’s usually at this point that he explodes in his commercials, but if he doesn’t do it then, it’s just a matter of time. He’s a ticking timebomb with a rictus grim, but we can’t get enough of that semi-spontaneous combustor.

When Bender goes to the movies, he sits behind what appears to be a scrawny bot on a date. But when Bender antagonizes the seemingly little guy, the kid quickly expands to reveal his full size and his secret wrestling identity as the Masked Unit. An accidental slip leaves the Unit flat on his back, and naturally Bender takes the credit for the KO.

Wigbot is a resident of the robot asylum, but he’s a mad genius when it comes to hairpieces. He’s got pits of hair from every one of the main Futurama characters, and spends his hours combing them with glee. He’s a weird little guy with no clear purpose, but that’s what makes us love him all the more.

Poor Tinny Tim is the luckless orphanbot of New New York. He’s always seen hobbling along on his single raggedy crutch. Even when things are looking up, it’s never long before the little robot’s meager hopes are dashed. His endless optimism is a constant source of hilarity. Sad as it may be, we hope he always gets the short end of the stick.

“Silence!” The five Robot Elders who secretly rule the all-robot planet sure do love saying that. Unfortunately, they kind of suck since they’re totally power-mad and corrupt. It turns out they've been spreading anti-human propaganda to the other robots, ensuring they keep their power through malicious hatemongering. Silence! At least that’s still fun to say!

Whalers On The Moon

They’re whalers on the moon, they carry a harpoon! But there ain’t no whales, so they tell tall tales, and sing a whaling tune! So goes the shanty these Pirates of the Carribbean -like automatons sing night in and night out at the Moon’s amusement park. And it turns out one of the robots went to high school with Bender, though the whaler dies doing what he loved before they can have a proper reunion. Truly tragic.