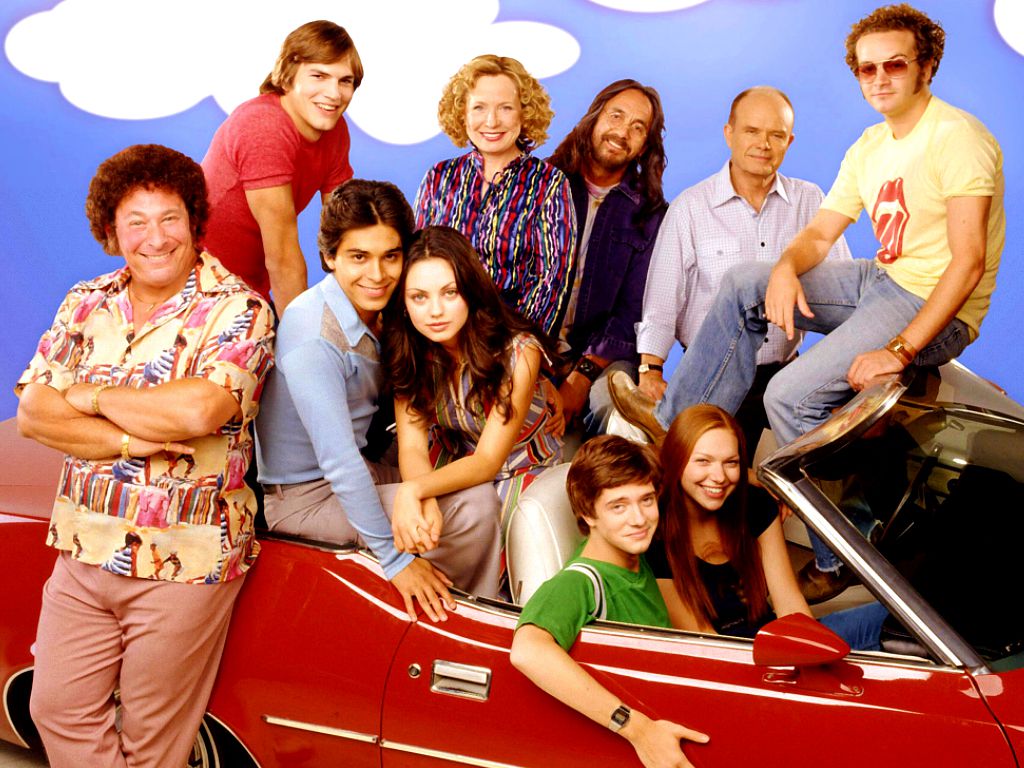 "That '70s Show" was a very successful television sitcom that aired in the late '90s until the early 2000s. It followed the story of Eric Foreman, his family and their friends living in a Wisconsin suburb in the 1970s. Although it took place in a specific time, the show was a hit because it was funny and everyone could relate to some aspect of it. Some of the stars of the show have moved on to other successes and some haven't had the same luck. Let's revisit the cast and see where they are now...

Topher Grace starred as Eric Foreman, one of the main characters on the show. "That '70s Show" was his first ever acting role. He asked to be written out of the final season to focus on his career in movies and his character was replaced by a character named Randy. Although, Grace did appear briefly in the final episode.

Grace did not have the breakout film career he originally intended when leaving the show but he has had a moderately successful one. Most recently, he played the Grand Wizard of the KKK in the Oscar-nominated "BlacKkKlansman" film. He is also starring in the 2020 pilot of the show "Home Economics," which will air on ABC.

Although "That '70s Show" was her first screen credit, Prepon had been acting for a little bit before then. Prepon appeared in plays like "A Woman of Property" and "Ascension Day" while in New York. In 1997, she appeared on the internet-based soap opera called "They Go On" before landing the role of Donna on the show.

Prepon has continued to act since the show ended in 2006. Most notably, she has played the role of Alex Vause in the Netflix hit "Orange is the New Black," which just ended its seven season run last year. She also has a YouTube channel that she updates regularly with mom tips and life hacks.

Ashton Kutcher played the lovable dummy Kelso on the show. Kutcher was discovered by a modeling agent in the middle of nowhere, Iowa and scrapped his idea of going to school to become an engineer to do modeling and acting. He landed the role of Kelso on "That '70s Show" during that year.

Ashton Kutcher is so rich now from investing in several startups that he just chooses to act whenever he wants to. He most recently starred in the Netflix family dramedy "The Ranch" which ended its run on the streaming platform last year. He is also married to his former "That '70s Show" co-star Mila Kunis and the couple has two children.

Mila Kunis immigrated to the United States from the Ukraine with her parents. She landed the audition for "The '70s Show" when she was only fourteen. The show was looking for people that were 18 years old to play younger, so she lied about her age. She ended up portraying Jackie so well that they just decided to go against their gut and hire her.

Mila Kunis is now married to Ashton Kutcher and the couple has two children. Kunis has continued to act since the show ended. She has voiced the role of Meg on "Family Guy" since the show started in 1999 and she continues to do so. She has also starred in movies like "Bad Moms" and "The Spy Who Dumped Me."

Valderrama got his start performing in plays like "A Midsummer Night's Dream." He made his on-screen debut in a Spanish-language commercial for Pacific Bell. He was cast in the miniseries "Four Corners" before finally landing the role of Fez on "That '70s Show."

Valderrama was on the show for the entires series. He continues to act primarily in television. He has starred on shows like "From Dusk Til Dawn" and has even had a role on his co-star Kutcher's show "The Ranch." Most recently he has played a role on the crime drama "NCSI."

Danny Masterson played the role of Hyde on "That '70s Show," but before landing that gig he had already been a pretty successful child actor. Masterson appeared on shows like "Cybil" and "Joe's Life" and in films like "Face/Off," "Beethoven's 2nd," and "Star Kid."

Since "That '70s Show" ended in 2006, Masterson has continued his acting career. He starred in the series "Men at Work" and alongside his old '70s buddy Kutcher in "The Ranch." He was fired from "The Ranch" in 2017 when rape allegations by several women were made against him, although no legal charges have since been made.

Debra Jo Rupp played Kitty Foreman, Eric's mom, on the show. She began acting in the late '80s on shows like "Newhart" and "Davis Rules." She had some character arcs on popular shows like "Friends" and "The Jeff Foxworthy Show" before landing her role on "That '70s Show." Kitty is by far her most well-known role.

Although her son on the show left the series at the beginning of the last season, Rupp continued to play Kitty alongside her show husband Kurtwood Smith aka Red. She has since continued to act primarily on television shows like "Better With You" and the soap opera "As The World Turns." She also played a role alongside her "That '70s Show" co-stars on "The Ranch."

Kurtwood Smith played Red Foreman, Kitty's husband, on the show. Smith had already been a pretty successful actor before getting his role on "That '70s Show." He appeared in hit movies like "RoboCop" and shows like "The Nightmare Years" and "The New Adventures of Bean Baxter."

Since the show ended, Smith has also continued to act and has also appeared in the show "The Ranch" with almost every other cast member from "That '70s Show." He also had roles on the shows "Patriot" and "Agent Carter," as well as voiceover roles in "Regular Show" and "F is for Family." He is set to play a role in the yet-to-be-titled Nate Bargatze television movie.

Lisa Robin Kelly played Eric's older sister Laurie on "That '70s Show." She actually abruptly left the show halfway through the third season. She returned to the show in the fifth season for four episodes but was replaced by Christina Moore in the sixth season because of substance abuse issues.

Unfortunately, Kelly couldn't kick her substance abuse problem. She continued to have run-ins with the law, for example, domestic disputes and DUI's. In 2013, she checked into rehab but passed away in her sleep in August 2013 because of an accidental unspecified oral "multiple drug intoxication."

Don Stark played Donna's father Bob Pinciotti on the show. Stark had a pretty hefty career before landing the role of Bob on "That '70s Show." He dove into acting in the mid '70s and has continued to act since. He appeared in hit movies like "Peggy Sue Got Married" and "Star Trek: First Contact" before playing Bob.

After "That '70s Show" ended, Stark continued his steady career playing roles on "Castle," "Maron" and "Hit the Floor." His latest role was in the TV movie "Lusty Crest" and he played a small role on an episode of the hit Showtime series "Shameless."

Tanya Roberts played Donna's mom Midge on "That 70's Show." Roberts started out as a model in the 1970s before getting the role of Julie Rogers on the fifth season of "Charlie's Angels." She acted in a variety of risqué action movies like "The Beastmaster," "Hearts and Amour" and a variety of small movies and shows before 1998.

Roberts left the show in 2001 because her husband became terminally ill. Her husband ended up passing away in 2006 and she hasn't really been in the spotlight since the series ended. But, she did write the foreword to the book "The Q Guide to Charlie's Angels" in 2008.

Josh Meyers joined the cast for the final season in 2005 as the character Randy Pearson, who was a love interest for Donna. Before joining the show he was a regular cast member on the sketch show "MADtv" from 2002-2004 which is funny because his brother Seth Meyers was a cast member and eventual head writer of its opposing show "Saturday Night Live."

Meyers has continued to act, primarily in one-off episodes of comedies like "Man Seeking Woman" and "Angie Tribeca." He has also done voiceover roles alongside his brother in the animated superhero series "The Awesomes." Most recently, he had a recurring role on the Amazon series "Red Oaks" and appeared in the movie "The Oath."

Tommy Chong was already a household name before getting on "That 70's Show;" it was actually one of the reasons why he was cast as Leo, Hyde's record store boss on the show. Chong is a marijuana icon and has appeared alongside his buddy Cheech Marin in a variety of stoner buddy movies like Cheech and Chong's "Up in Smoke."

Since appearing on the show, Chong is still a marijuana icon. He actually appeared on the reality competition show "The Masked Singer" last year singing underneath a pineapple costume. He also announced in 2012 that he is battling prostate cancer and in 2015 he announced he had colorectal cancer, but the stages are early and he claims to be using cannabis and CBD like crazy to prevent his conditions from getting any worse.