The Best DC Characters That Deserve Their Own Series

HOLLYSCOOP TEAM
The Best DC Characters That Deserve Their Own Series April 16, 2018 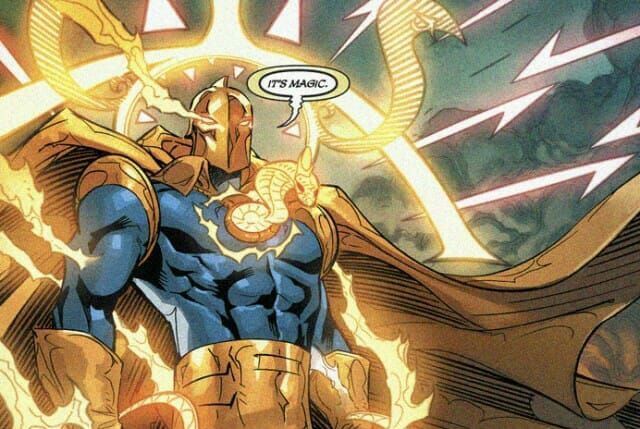 DC Comics characters that deserve their own TV shows The CW’s Arrowverse has brought us superheroes, rich characters and awesome action. It also introduced new characters to DC Comics neophytes. And it gives die-hard fans the shows they’ve always wanted and deserve. But who are the DC characters that should have their own series?Apart from Green Arrow, Flash, Vixen, Supergirl, Rip Hunter, White Canary, Atom, Heat Wave, Firestorm and The Rey, that is. Here's our list of DC Comics characters that deserve their own TV shows. (With Titans premiering on a still-unannounced digital service, I also took out of contention Dick Greyson/Robin, Starfire, Raven, Beast Boy and any other Teen Titans. They're all getting an awesome new show of their own, after all.)

Martian Manhunter is a fan favorite appearing in Supergirl and in a crossover event on The Flash. J'onn J'onzz, in the human form of Hank Henshaw, would be the perfect candidate for his own show. One of the most powerful superheroes in the DC universe, and one who shows compassion along with his strength, his tragic backstory and kindness are what great spinoffs are made of.

A powerful sorceress, who is one of the most powerful on earth, Zatanna has historically helped out the Justice League. She is definitely the most famous magician in the DC universe, and while not yet appearing in the Arrowverse, she is a fun character with a rich backstory, and who doesn’t love a magic sorceress?

Already given his own comic series, reportedly getting his own movie, and being featured as a major part of the Justice League movie, why not give Cyborg his own show too? Cyborg is beloved; it just makes sense. The highly intelligent Victor Stone both resents and benefits from his enhancements, which is the perfect ongoing tension for a TV series, and one the fans would be happy to see.

The third Robin is (maybe) the best of them all. I mean he figured out Batman and the original Robin’s identities before his tenth birthday. It might be cool to have a show centered around a kid, and appeal to a slightly younger audience. He could have an origins story, and live in the same world as Dick Greyson/Robin from the new Titans TV series.

Doctor Fate hasn’t yet appeared in the Arrowverse, and as one of the coolest sorcerers in comics he should arrive with a bang. Part of the Justice Society of America, most of Doctor Fate’s powers come from the Helmet of Fate. There have been many iterations of Doctor Fate, but Kent Nelson should be the one given his own series.

The second character to assume the Robin mantle, Jason Todd,  was incredibly unpopular in his time. He was then rebooted as the popular vigilante Red Hood. I think in this new hipster world of rediscovering and re-assessing either version of Jason Todd would be cool to see, although I am sure more fans would be more stoked with Red Hood than the least popular Robin.

The third character to play the Blue Beetle is the young Jamie Reyes. Imbued powers by an alien object fused to his spine, he is such a cool character and it is weird to me he isn’t going to be a lead in the upcoming Titans TV series. But since he isn’t, that is the perfect reason to give him his own show!

An alternate universe Supergirl who makes her way to the DC universe we know, it would be cool to introduce her in Supergirl and transition her to her own show. I mean Supergirl is so good, who wouldn’t want more of it? She is like Supergirl’s older sister, and that could be an awesome dynamic with plenty of crossover opportunity.

One of the most popular iterations of the Green Lantern, Kyle Rayner is not as fearless as the all-time fave Hal Jordan, but his more relatable personality is what has made him a fan favorite and one of the most successful successions in comic book history. He more than deserves his own TV show, since Hal had his own (terrible) movie.

One of the deepest and most complex characters in DC Comics, the Watchmen’s Rorscharch could take The CW’s universe to much darker places than it has previously gone. If they want to expand the brand, then this masked vigilante would be the perfect character to be handed his own series.

Another Watchmen character, Doctor Manhattan is now a major antagonist. An all-powerful being who is named after the Manhattan Project, it would be interesting to see which direction a show fronted by him would take, heroic or villainous. He is such an interesting character, I am sure people would tune in for either version.

Batwoman is the most high-profile LGBT comic book character. Created as a love interest for Batman, she has come a long way in her over 50-plus years, being reinvented as a lesbian in her latest incarnation, Kate. The Arrowverse expanding to have a queer lead would be the best thing possible for the fans!

The Huntress, as depicted in the Helena Bertinelli version, is the daughter of a Gotham mob boss. She is a rich and complex character straddling the line between hero and villain. She appeared in Arrow, but deserves more of a platform to explore what happens when heroes bent on good, begin to act like the people they are trying to defeat.

Now that Wonder Woman is the biggest DC character on the planet, it makes sense to give one of her protégés their own show. Cassandra Sandsmark, the latest iteration, is the daughter of an archeologist and Zeus. The fact that her and Supergirl are best friends in a lot of the comics allows for ideal crossover opportunities.

The original Wonder Girl, Darkstar, and Troia, she was created to be friends with Diana Prince’s Wonder Woman, then kidnapped and brainwashed. She is a founding member of Teen Titans, and her abduction as a child and remembering of her origins would be the awesome basis for a CW show and another way to get the popularity of Wonder Woman to the small screen.

Another morally ambiguous character, The Spectre is a force that needs a human host so it can reek vengeance on those who have murdered. At one point, The Specter is taken up by Hal Jordan’s spirit, which could also be an interesting aspect to focus on. Darker than the rest of The CW Arrowverse, it would be cool to see what this character could add. His brutal judgements of human crimes is also perfect for a serialized TV show.

Barbara Gordon has already appeared on The CW, but Cassandra Cain has not. The Asian-American Cassandra would be a great choice as the first Asian lead of a DC/CW series. She graduates from Batgirl to Black Bat, and that trajcection along with her martial arts skills would be something I would watch week in and week out.

The modern conception of Wildcat, which uses his misogyny to critique toxic masculinity, could be a perfect addition to The CW’s lineup in a world where we are all too aware of the effects of unchecked misogyny. The character has appeared in Arrow and his future is currently in doubt. If The CW wants to tackle some difficult issues, maybe giving him his own show is the way to do it.

A member of the Green Lantern corps who trains new recruits. The ugly alien is not what we think of when we picture superhero lead, but I would love to watch a show where this oafish genius with super-strength trains a whole new set of recruits that can be sent out into the Arrowverse.

The ghost of a trapeze artist, Deadman tracks down the mysterious Hook who murdered him. I just love the brilliance of a ghost trapezer and how that would fit in with the other characters of the DC-universe. The problem with Deadman is that he is on a specific mission, and once that is accomplished, keeping him around becomes a little questionable. If that could be overcome than I would love to watch a Deadman series.

Another superhero whose powers come from a radioactive accident, Static is super cool because he can control and generate electric power, and one of the best to riff on the Spiderman trope. No relation to Black Lightening, his powers are, however, closely related. With that show getting great reviews, the question is do we need a Static tv show? I think we do!

Miss Martian has been a fan favorite on Supergirl and Sharon Leal is more than deserving of her own show. The list of her skills from super strength to regeneration, flight, and shape shifting, is just awesome. M’gann M’orzz is a white Martian, and she is presently back on Mars in the Arrowverse. Giving her a standalone show would be the perfect reason to bring her back.

The most heavy-metal of anti-heroes, Lobo is an alien bounty hunter who was originally meant to be a satirical take on the hyper-violence of the Wolverine character, but fans took to him earnestly. With the popularity of Deadpool, I think an irreverent take on Lobo could be a really cool series on The CW.

Let’s be honest, it is an actual crime that Superdog doesn’t have his own TV show. How is this not a thing? As a massive fan of Wishbone, I am 100% confident dogs can carry series. If you aren’t sold on this idea, then let me remind you what we are talking about – a superhero dog! For him to be the star of his own series, I think you would have to go back to the Golden Age conception of him as having human-level intelligence, as opposed to the modern incarnation where he is just a strong dog. But come on – SUPERDOG!

Originally a replacement for Superman after he died, Steel aka John Henry Irons, makes references to African American history and in particular draws inspiration from John Henry. His powers are given to him mostly by his suit, but he has genius-level intellect and insane strength on his own. It would be cool to have a series which specifically focused on African American strength, courage, and goodness. In the wake of Black Panther, this seems like a no-brainer, and overdue.