The Deadliest Characters Playing The Game of Thrones 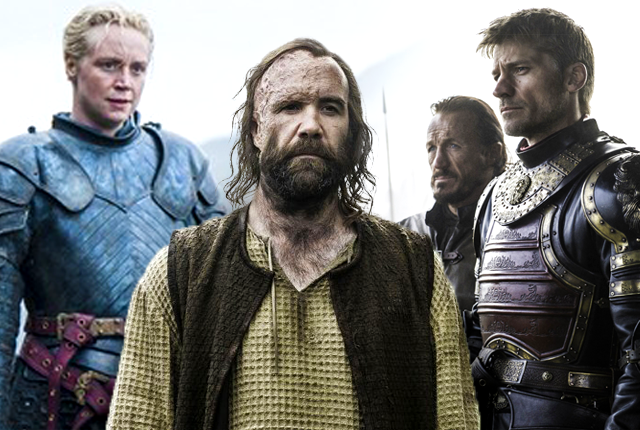 There is plenty of blood spilled on 'Game of Thrones' but who has the highest kill count in Westeros? Well it might be someone who is actually in Essos. Anywho, check out our ranked list of the most murderous characters from the best show on television. *Note: We tried to be exact as possible from what has been seen or referenced on screen and most of these characters are no strangers to battle and probably have much higher kill counts so feel free to debate the rankings in the comments.

Kill Count: 5 We thought for a brief moment that Theon had killed Bran and Rickon, but it turns out they were just peasant farmer boys. But then he executed Sir Rodrik. He also pushed that b*tch, Myranda off a parapet. His part in the Battle in the Whispering Wood would likely increase his count.

Kill Count: 6 Jaime's most famous kill is the Mad King, but he also killed his own cousin, Alton. If we were to guess at how many people Jaime has killed in battle, including the Battle in the Whispering Wood we would be talking 100s of bodies.

Kill Count: 6 The first time Tyrion killed a man, he bashed his head in with a shield. Ouch. He also shot his father, Tywin, with a crossbow and strangled his former lover, Shae. It should also be noted he deserves some credit for the thousands that died the Battle of Blackwater Bay, it was his idea to use wildfire. Clever.

Kill Count: 10 The owner of some of the most satisfying deaths on 'Game of Thrones', Arya is really starting to tally up the body count. She is savage, too, she baked two Freys into a pie and fed it to their father before slitting his throat. Damn. Expect her number to keep growing.

Kill Count: 12 Brienne the Beauty most like has a higher count, but not by much. As honorable as a knight can be, Brienne still has to slice some people up from time to time. She almost killed The Hound, but DID kill Stannis. Does that make her a 'kingslayer'?

Kill Count: 13 (plus 100s+) So this one is a bit tricky. The Mountain on-screen has been seen lopping off heads, severing heads and popping heads like grapes. But we also know he was raping and pillaging the Riverlands at the behest of Tywin Lannister back in the first few seasons. His actual kill count should be north of 500.

Kill Count: 15 Kissed by fire and deadly with a bow. Her actual count is much higher, no doubt, but we have it at 15 and sadly after Olly put an arrow in her that is where it will stay.

Kill Count: 16 Known as the Bold, there is no doubt Barristan's kill count is much higher due to his lengthly tenure as a member of the Kingsguard and the countless battles he has fought in. His count is probably in the 100s.

Kill Count: 17 This bastard killed his father, step mother, step brother, Rickon Stark(!) and Wun Wun, so, yea, we hate him. He also liked to feed people to his hounds.

Kill Count: 22 Mr. Friendzone had a slow start on his count, but once he made it to Meereen, Jorah started dropping Sons of the Harpy left and right.

Kill Count: 23 The leader of the Unsullied is no stranger to death. We have seen him more than handle his own in a fight. He should probably get bonus points for his double-kill of the Great Masters with one swift stroke of his dagger.

Kill Count: 26 (plus at least 8000) Everyone knows this sellsword is more that capable with a blade. He has been dropping bodies season after season. But we are crediting him for shooting the flaming arrow into a ship carrying barrels of wildfire that completely annihilated Stannis's fleet on the Blackwater. Thirty-nine ships were lost to the fire, so with a conservative estimate that there was an average of 200 or so soldiers/crew members per ship, the number of bodies at the feet of Bronn is at least 8,000 (a nice round number).

Kill Count: 29 After years of fighting other Wildlings, Black Brothers and 'Southerners' Tormund probably has a kill count to rival most anyone else on this list. But from what we have seen on screen, the number is what it is. We also have a feeling this number is going to go up in the new season. Shout out to Tormund for literally beating the Lord of Bones to death. That guy was a jerk.

Kill Count: 32 Everyone's favorite giant loves to smash people and his kill count reflects that. Sadly his count is over since Ramsay put an arrow through his eye. RIP Wun Wun.

Kill Count: 33 From Mycah way back in season 1 to those wretches who try to rape Sansa and then to just about everyone who came across he and Arya. The Hound is a murder machine and his lifetime kill count is probably much, much higher.

Kill Count: 38 The sellsword is no stranger to battle and his count is actually much higher, but we have seen him kill plenty of slavers and Sons of the Harpy in his service to Mother of Dragons. The man is deadly.

Kill Count: 53 We saw Jon kill Qoran Halfhand way back when and his kill count was relatively low in the first few seasons. Then he was murdered... and resurrected. Since then Jon is on a killing spree to avenge his own death and then into the Battle of the Bastards where he was cleaving soldiers left and right.

Kill Count: 183 Now, we know you are probably wondering where we got this number so let us explain. Dany smothered Khal Drogo, burned Mirri alive on the pyre, burned 15 khals alive at Vaes Dothrak. She also locked Xaro Xhoan Daxos and Doreah in a vault. And we are giving her credit for the execution of Mossador and the crucifixion of the 163 Great Masters on the road to Meereen.

Kill Count: 300+ First off, we aren't even counting her childhood friend, Melara, that she most likely pushed into a well to drown. But we are definitely counting the lowball estimate of 300 people incinerated in the explosion of the Sept of Baelor. Casualties include: Kevan and Lancel Lannister, the High Sparrow, and Mace, Margaery, and Loras Tyrell.

Kill Count: 1000+ We hear your groans already, but hear us out. First, Drogon gets partial credit for killing Pyat Pree and then there was the slaver of Astapor, Kraznys mo Nakloz. He really got going with his fiery barrage in the fighting pits of Meereen and then really upped his count when he torched the slaver's fleet from Yunkai. We feel 1000 is a little low actually. Expect this number to skyrocket once he makes it to Westeros.