The 25 Saddest Scenes in Disney Movies 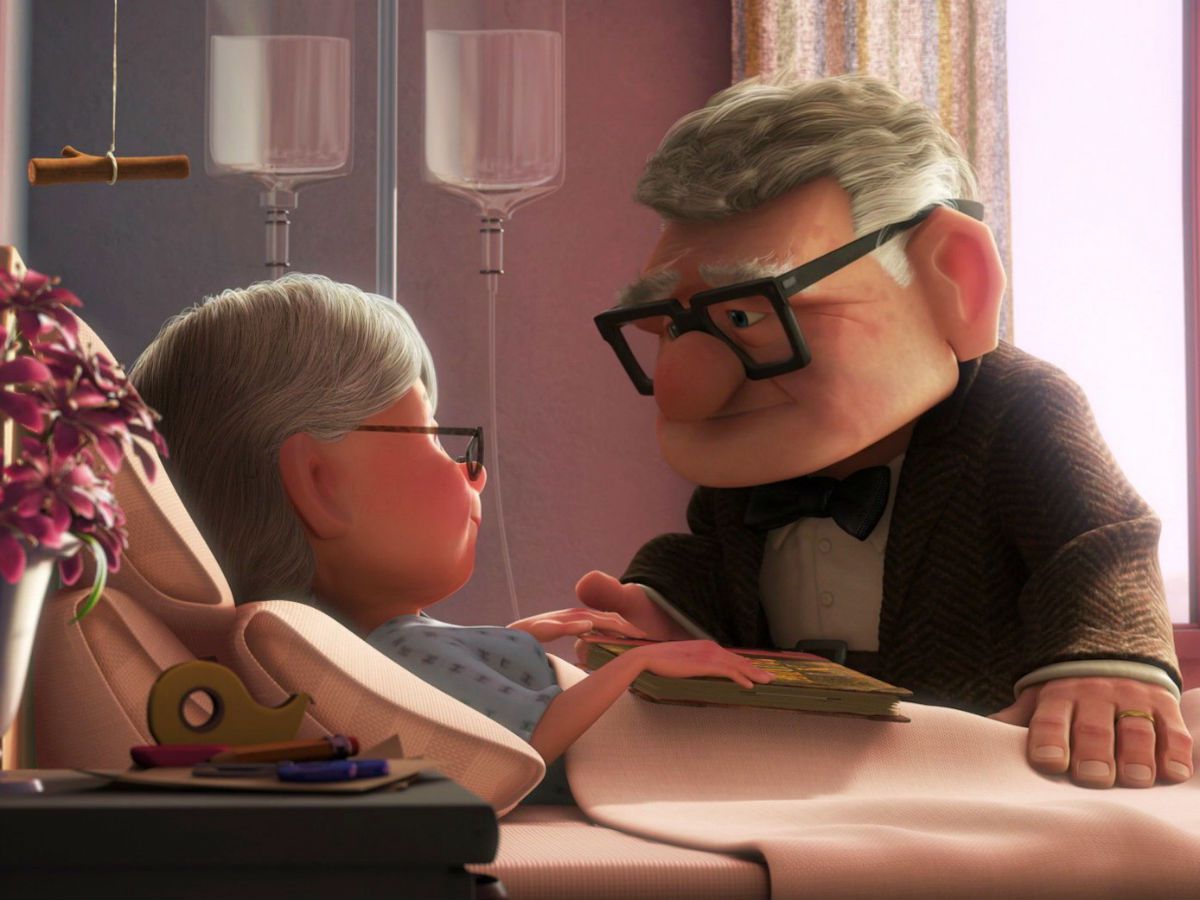 Just because Disney makes a lot of kids' classics doesn't mean it's all smiles. Disney has some tear-jerking scenes. Warning: spoilers, obvi.

Might as well get it out of the way. This is the scene when you're talking about sad Disney scenes. Bambi's mother gets shot. We all cry our eyes out. We're scarred for life and never forget the sound of that shot.

Disney has several movies where the lead character's parent gets killed early on. Like "Bambi", "The Lion King" has the death of a parent you won't soon forget. When Scar kills Mufasa, and Simba is left alone, we feel alone too. When Simba cries, we cry with him.

Think they only get to you by killing parents? Think again. Dumbo's Mom is thrown in jail. He becomes the laughingstock of the circus. He goes to her for comfort, but she can't do much, except rock him in her trunk, from jail. Ugh, Disney, why do you do this to us?

For an entire movie about death, "Coco" is remarkably fun and upbeat. But the song 'Remember me' becomes an instant tear-jerker when Miguel's abuela dies. It's a bittersweet moment. We know Coco has a life for her in the land of the dead, but we know there's no link to the land of the living. The song is both happy and sad at the same time, and you'll cry some confused tears.

Disney really knows how to break your heart. In "Up", they build a lifetime's worth of memories in minutes. They take you through Carl and Ellie's life together, weaving in both their dreams and their unfulfilled wishes. Then Ellie dies before their wishes can be fulfilled. That, in itself, could be a whole movie, but nope, it's only the beginning. You're in tears before the real journey even begins.

As if crying dwarfs aren't bad enough, Disney ups the ante. After Snow White dies, the dwarfs gather around and mourn. It's already heartbreaking to see how sad they are. But then you zoom out, and just outside the window are all of the woodland creatures she loved, looking in saddened. To top it off, it's raining all over them. It's a heartbreaking scene.

Imagine this: you're a father. Your child disappears. You go out to find him. You get into trouble. He finds you, saves your life, and drowns in the process. That's what happens in "Pinocchio". Disney, you're killing us.

The song, 'Do you want to build a snowman' from "Frozen" was a huge hit. It sounds like a fun concept, a girl asking her sister to build a snowman. Except it happens after Anna has accidentally has harmed Elsa and doesn't want to play with her out of fear she'll hurt her. So you have Elsa wanting to play with her sister, who wants to do it, but can't. Your heart aches for both of them.

'Lady and the Tramp - Trusty Gets Hit by a Car

Towards the end of 'Lady and the Tramp", Trusty goes to save Tramp. As a bloodhound, he uses his incredible power of smell to track him down. How is he rewarded for his efforts? He gets crushed by the dogcatcher's wagon wheel. Jock nudges him, but Trusty doesn't respond. A tear rolls from his eye, but by then, we're already Niagara Falls.

Oof, this scene is hard to watch. Lovable recluse Quasimodo from "The Hunchback of Notre Dame" gets the courage to go to the Festival of Fools. It works out - temporarily. The crowd goes from cheering for him to mocking him in a split second. He then becomes a laughing stock as they tie him up and pelt him with tomatoes. It's how joy turns to humiliation and helplessness so quickly that make this scene so devastating.

'Beauty and the Beast' - Belle's Dad Goes to the Asylum

Poor Maurice. He wants to save his daughter from the Beast, and comes to the villagers looking for help. Instead of finding it, he's branded as a lunatic. Our heart breaks for Maurice, who we know is telling the truth. He's a victim of Gaston's scheming, and it's hard to watch.

Disney really puts you through the ringer with "Tarzan". Kerchak's baby is tragically killed early in the film, which is sad enough to begin with. His wife adopts Tarzan, whom he only hesitantly accepts. But in a thrilling act of heroism, he saves Tarzan's life at the expense of his own. With his dying breaths, he admits Tarzan is his son. Kerchak's story begins and ends with sadness.

When Disney isn't killing parents, they're killing grandparents. In "Moana", we fall in love with Tala, Moana's delightful grandmother. But then Disney takes her away from us. Moana has the chance to say goodbye, but that's what makes it all the more crushing, Tala and Moana sharing one last moment together, and when Tala dies, a part of us goes with her.

'Big Hero 6' - Tadashi Speaks from Beyond the Grave

"Big Hero 6" already starts in a sad place, because the lead's parents are already dead. You think, okay, well, maybe that's a relief; Disney can't kill them off. Except Disney has other tragedies in store. Tadashi, Hiro's brother and de facto parent, dies. But his death scene isn't even the saddest one. No, the real tearjerker in this movie is Hiro seeing videos of his brother Tadashi after his death. Tadashi says something nice about his Hiro, which is hard enough to watch, but then Hiro puts his hand on the screen lovingly. You can feel the love and loss in that moment. It's devastating.

'Inside Out' - Bing Bong Sacrifices Himself

There are death scenes, and there are death scenes. It's not just that Bing Bong dies in "Inside Out". He sacrifices himself. He does it in such a way that the other character doesn't even know what he's done until she turns around. Bing Bong jumps off the back of the wagon, because he's weighing it down, and Joy can't escape unless he does. It's a moment of both success and devastation, as it wouldn't have been possible without Bing Bong selflessly giving up his life.

'The Princess and the Frog' - Ray's Light Goes Out

Who knew that the death of a firefly could be so devastating? This delightful character is from "The Princess and the Frog". He gets stepped on, and it's terrible. But he survives! We think it's going to be okay, but then, he closes his eyes, and we know he's gone. Be still, my tears. Go back from whence you came!

'Fantasia' - The T-Rex Kills the Stegosaurus

You probably haven't seen "Fantasia" in a long time. You probably have a pleasant picture in your head of Mickey Mouse, dancing around having a jolly old time with a mop. Wrong. There are eight segments to "Fantasia", and in one of them, a T-Rex brutally murders a stegosaurus. Which would probably feel like a 'survival of the fittest' thing, were it not for the stegosaurus falling to the ground, and you see its tail dropping, dramatically, and its eyes closing. It breaks your heart.

'Beauty and the Beast' - Belle Cries Over the Beast

This is such a tragic scene in "Beauty and the Beast". The Beast sacrifices himself for Belle. With that sacrifice, she realizes she loves him. But it's too late - he's dead. She cries for him. We cry for her. Everybody cries.

This scene is hard to watch. Mulan and her companions get to the village, and when told to search for survivors, they find none. Then, Li Shang, searching for his father, finds his helmet and knows he's dead. In a touching tribute, he plants his sword in the snow and puts the helmet on top.

This is one of those happy/sad moments. We're happy for the Genie, because he gets the one thing he wanted - to be free. But we're sad, because he's leaving Aladdin, who's been his true and genuine friend. In giving the Genie what he wants, he also loses him.

This scene from "Finding Nemo" skillfully manages to break your heart for both characters at the same time. Marlin is convinced his son is dead. Out of frustration, anger, and sadness, he tells Dory he doesn't want to see her. We feel for him. But we also feel for her, since Marlin's been her only friend. This scene makes you doubly sad for both characters at the same time.

A lot of Disney's saddest scenes have a death or implied death in them, but this scene from "Toy Story" has neither. In the scene, Buzz, a character full of pride, sees a television commercial, and discovers he's nothing but a mere toy. Suddenly, everything he was proud of ceases to exist. It may not have death, but it's just as sad as the scenes that do.

This is another scene without death that manages to utterly destroy you. Cinderella, who has seen much cruelty and little joy in her life, comes down the stairs wearing her dress, excited, ready to go to the ball. Her envious stepsisters tear her dress to shreds. We know what hardship Cinderella's gone through to even have that dress, and when her dreams are crushed, a part of us is crushed with them.

"Pocahontas" is one of the few Disney animated films that doesn't grant us a "happily ever after". Instead of John Smith and Pocahontas ending up together, Pocahontas decides to stay with her family. It's the right thing to do, but we still mourn for the romance that couldn't be.

This was a new one for Disney. Instead of killing parents, in "Finding Nemo", they killed a spouse and hundreds of children. They may have been nothing but eggs, but in that moment, Marlin's entire family is taken away from him - his wife, his kids, everything. Disney is nothing if not creative when it comes to finding new and torturous ways to make us sad.