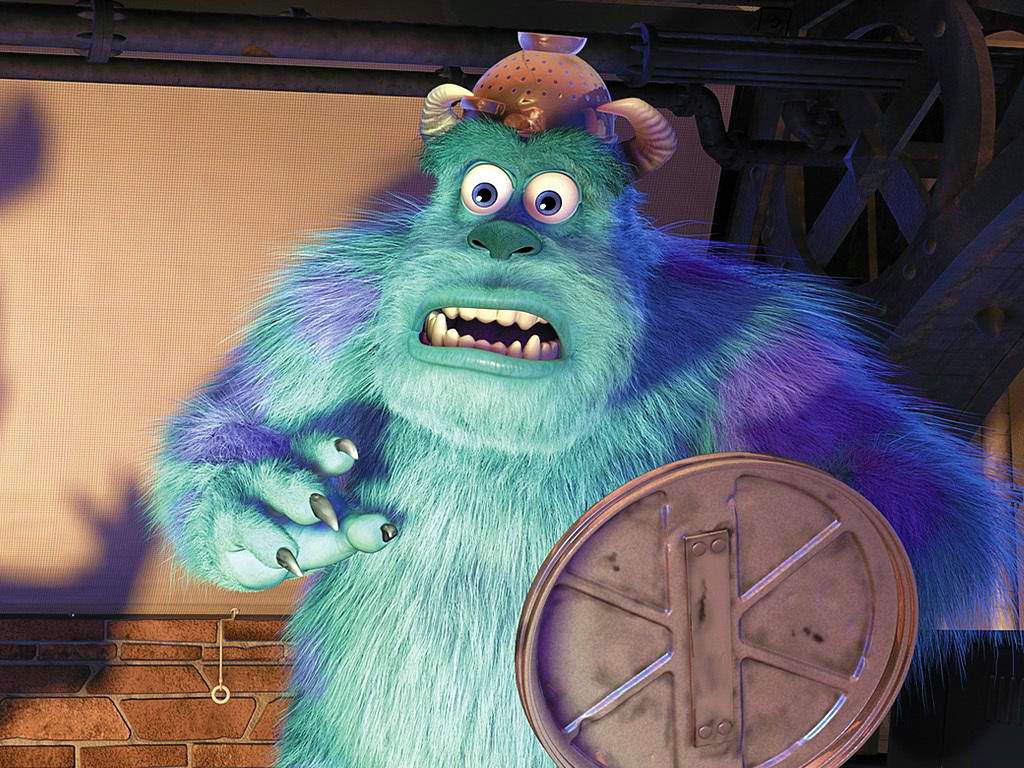 Disney movies aren't always simply color and fun. Some small references in these films, whether deliberately or by accident, can end up making the stories very dark and disturbing.

In "Toy Story 3," Bonnie's bathroom is shown to have a very familiar toilet seat cover. This fuzzy design matches the fur found on Sully in the "Monsters Inc," and fans quickly determined that this must mean that Sully has met a horrible fate after straying into the human world to look for Boo.

Ever thought the carpet in Sid’s house in the original “Toy Story” looked weirdly familiar? That’s because it’s the same as the carpet in the hotel in “The Shining.”

The Security Camera in 'Toy Story 3'

References to “The Shining” don’t end there – a security camera in “Toy Story 3” is labelled “Overlook H237,” a reference to the name of the iconic Stephen King hotel, and the spooky Room 237 where scary stuff happens.

In one scene in “Hercules,” the movie’s demigod hero is seen wearing a dead lion. This is a reference to one of the heroic trials that Hercules undertakes in Greek myth, but look closely and you’ll notice that this is also the dead corpse of Scar from “The Lion King.”

Odd Art for 'The Little Mermaid'

There’s been a lot of controversy surrounding the original VHS box cover art for “The Little Mermaid.” For years, fans have speculated about some oddly shaped turrets on Ariel’s castle, wondering if a disgruntled artist decided to sneak some inappropriate imagery into their work.

An Excited Vicar in 'The Little Mermaid'

Speaking of hotly debated art for “The Little Mermaid,” during the movie’s wedding scene it looks as if the minister conducting the ceremony is a little too excited. Some people argue that this is just meant to be his knee, but not everyone is convinced, especially as this was changed in future releases of the movie.

Inappropriate Art in 'The Rescuers'

One unequivocally adult Easter Egg could be seen in the original VHS release of “The Rescuers.” One enterprising Disney employee managed to sneak a blink-and-you’ll-miss-it picture of a topless woman into the background of a scene. Following this controversy, Disney was forced to recall millions of tapes and reissue a new print of the film.

Nazi Imagery in 'The Lion King'

Younger audiences watching “The Lion King” might be amused to see Scar’s hyena cronies marching in formation during the musical number “Be Prepared.” Adults are more often to pick up on the disturbing (and not very subtle) imagery – the hyenas are as evil as literal Nazis. Considering that all the hyenas want is to never be hungry, this brings up some uncomfortable questions about what makes someone do evil things.

In what’s meant to be a cute cameo, Rex from “Toy Story” can be seen in “WALL-E,” tucked away among the little robot’s collection of cool human junk. Thinking about this, though, could induce nightmares. All of Rex’s friends are gone forever, and the poor dinosaur has been alone, isolated and unloved, for centuries.

In a brief split-second of “Brother Bear,” a clownfish can be seen among a group of salmon that are about to be caught and eaten. Leaving aside the question of how a tropical fish got so far north, it’s pretty clear that Nemo is about to die. Disney and Pixar were feuding at this time, which might explain the creepy cameo.

In the movie “Dumbo,” the titular elephant is originally named Jumbo, as his mother is named Mrs Jumbo. This is a reference to a real life famous elephant named Jumbo (who is presumably Dumbo’s father in the movie). Sadly, Jumbo was tortured throughout his life before he was killed at age 23 (young for an elephant) when he was hit by a train. This makes “Dumbo” even more tragic.

Down at the bottom of the sea in “Finding Dory,” it’s possible to see a Volkswagen Beetle decaying and collecting moss. This is none other than Herbie, The Love Bug, who appeared in several Disney movies over the course of many decades. Apparently, the sentient car ended up drowning some time after his last adventure with Lindsay Lohan.

In the classic Disney “Three Little Pigs” animated short, the pigs all sing and dance in one of their homes. Next to them on the wall can be seen a framed picture of some sausages, with the caption “Father” underneath. A silly joke in 1933 feels a lot worse now that Disney movies have developed a reputation for murdering parents.

An Adult Phone Number in 'The Santa Clause'

In the original theatrical cut (and subsequent home release) of “The Santa Clause,” Tim Allen’s character makes a joke about the phone number “1800-SPANK-ME.” It turned out that this was a real phone number which many kids tried calling after watching the movie, and as such, all future releases of the movie have been edited to remove the joke.

In the original “The Lion King,” at one point Simba flops down onto the ground, upsetting a cloud of dust. Some viewers have noticed that it looks like the dust forms the letters “S,” “E” and “X” in that order. Disney artists claim that it’s supposed to say “S,” “F” and “X,” a reference to special effects, but this still seems suspicious.

For a brief second in the movie “Who Framed Roger Rabbit,” when Jessica Rabbit is knocked out of a cartoon taxi cab, it’s possible to see further up her skirt than anyone should want to. Animators actually went to the trouble of editing this in, and apparently nobody at Disney’s Touchstone Pictures managed to catch on.

Gason's Eyes in 'Beauty and the Beast'

In “Beauty and the Beast,” as he falls to his death, it’s possible to see skulls flashing in Gaston’s eyes. Just in case you were in any doubt about his fate.

In “Toy Story 3,” the character of Sid can be seen, all grown up, working as a garbage man. According to the team behind the movie, school didn’t agree with him, but we can’t help but wonder whether his career choice was influenced by learning that all toys are alive (and supposedly out to get revenge on him). Why else would he choose to work in a job that involves burning toys alive?

Fans have speculated endlessly about a line of dialogue in “Aladdin” when the titular hero is being hassled by Rajah the tiger. To many, it sounds like “Good teenagers, take off your clothes.” Apparently the line is supposed to be “Good kitty, take off and go,” but this isn’t quite convincing to many listeners.

The River Guardian in 'Hercules'

When in “Hercules,” the titular hero defeats the River Guardian by headbutting him really hard, the centaur grows a large bump on his head which looks worrying. His protruding brow doesn’t exactly make things better…

The West Wing in 'Beauty and the Beast'

In “Beauty and the Beast,” Belle tiptoes quietly inside the west wing of the Beast’s castle to discover broken furniture and torn paintings. The problem? Everything in the castle, from furniture to spoons, is alive. This means the Beast must have murdered a bunch of his servants in rage at some point over the years.

For a brief scene in "Basil the Great Mouse Detective," we see the shadows of Sherlock Holmes and Dr Watson themselves. In this scene, audio from Basil Rathbone, one of the most prolific Sherlock Holmes actors, is used for the famous detective. The problem? At the time of the movie's release, Rathbone had been dead for twenty years, making the use of his voice a little creepy.

There's a theory going around that Elsa's parents, who presumably are lost at sea at the start of "Frozen," instead survive a shipwreck and start a new life in a jungle home before being torn apart by a cheetah - leaving behind their new son, Tarzan. This theory sounds like complete nonsense, but in a Reddit AMA, Chris Buck, one of the directors of "Frozen," actually endorsed it as canon.

An early version of the script for "The Little Mermaid" stated that Ursula the Sea Witch is King Triton's sister - hence her line about once living in the palace. The design for Ursula is actually based on the drag queen Divine, making the character somewhat difficult to swallow in a society that is questioning why so many Disney villains are coded queer.

Disney movies have a tendency to kill off parental figures, in a trend that goes back to "Bambi," which was produced by Walt Disney himself. Disney blamed himself for the death of his own mother - she died as a result of a faulty gas oven in the home he bought for her with the profits from "Snow White," and when she raised concerns about the oven, his employees failed to take the matter seriously.