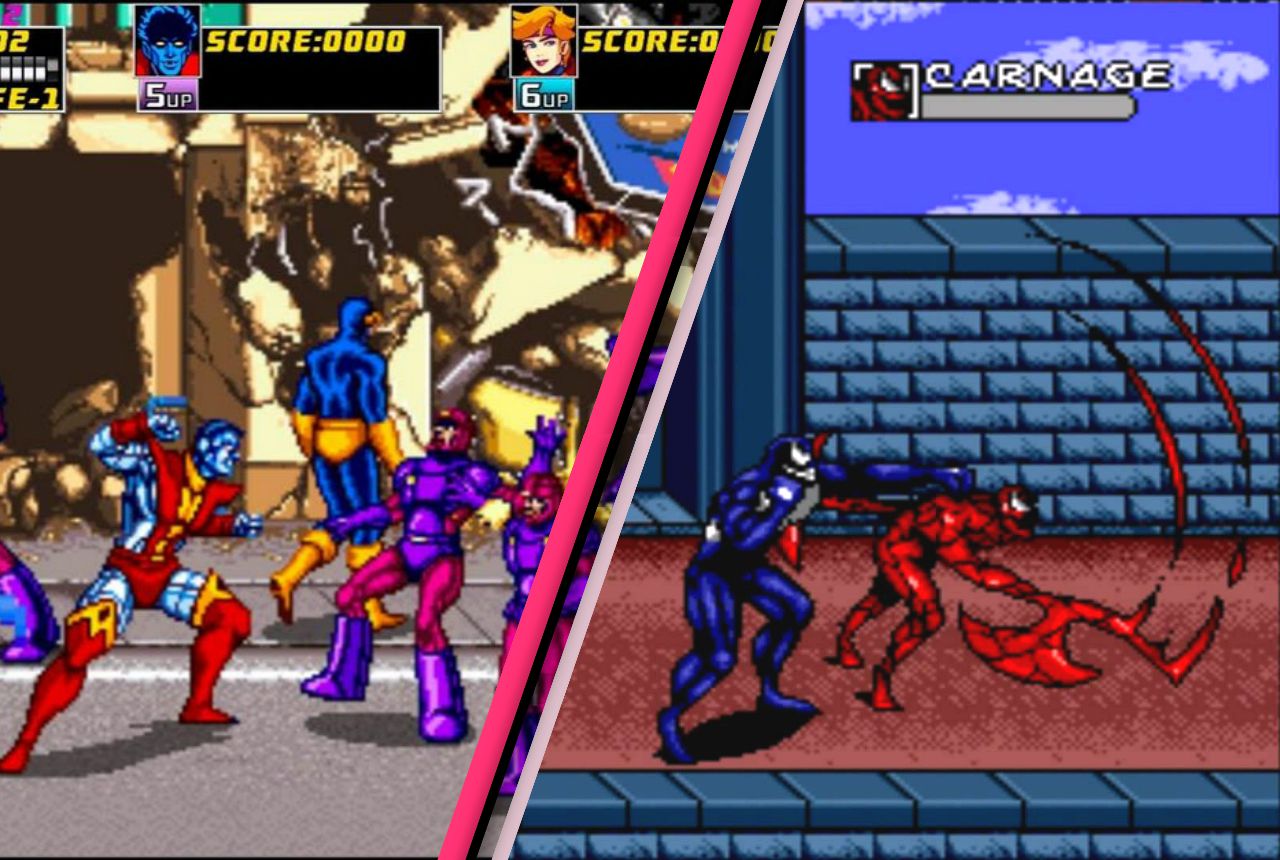 So you've inhaled all the MCU movies. Gritted your teeth through the DCEU ones. Read all the acclaimed runs, watched all the good Netflix  adaptations, and played all the best video games. But you demand more superhero content. You want movies you missed, titles you passed over, and obscure comic book video games. And why wouldn't you? Not to get all hoity-toity, but comic books and superheroes are our generation's modern myths and allegories. The more we can directly engage with them, the more connected we feel, the more fun we have. So if you're looking to play in the world of your favorite comics directly, check out some obscure comic book video games that may have passed by your radar.

Ghost In The Shell

Leave that problematic Scarlett Johansson mess somewhere else. If you're looking for new ways to live in the world of Ghost In The Shell, the acclaimed manga series, check out this Playstation third-person shooter. It uses the same voice cast as the film adaptation, and has interesting wall-climbing mechanics.

[dx_custom_adunit desktop_id="RTK_K67O" mobile_id="RTK_5yk0"] In 2006, when the Marvel Cinematic Universe was just a glimmer in Kevin Feige's eye, you could play as any Marvel hero you wanted to. Marvel: Ultimate Alliance offers entertaining, accessible beat-em-up gameplay with surprisingly deep RPG skill trees. And a lack of studio rights baloney means Wolverine and Iron Man can fight side by side, no problem.

There is no simpler pleasure in this world than plugging in your old school Super Nintendo controllers and being goshdarn Teenage Mutant Ninja Turtles travelling through goshdarn time. This #TBT (throwback turtle) gives you classic side-scrolling action, modified moves and weapons for each turtle, and some of the most delightful voice acting ever. Plus, for the more modern gamers, there's an enhanced remake for Xbox 360 and Playstation 3.

The Venn diagram for fans of old school, 16-bit sidescrolling brawlers and fans of Batman is just a circle. So why isn't everyone always talking about Batman Returns, the absolute pitch-perfect sidescrolling Batman brawler? It's colorful, difficult, oozing with Burton-esque production value, and so much fun.

[dx_custom_adunit desktop_id="RTK_K67O" mobile_id="RTK_5yk0"] Nervous about the upcoming Venom movie? Us too. Know what gives us comfort? The promise that no matter what, Spider-Man And Venom: Maximum Carnage will always exist to give us the surprisingly gruesome action-packed Venom action we need. The web/symbiote mechanics of this beat-em-up are so satisfying, and the rendering of Carnage is truly horrifying.

X-Men: Children Of The Atom

Ever have a blast button-mashing your way through a Marvel Vs. Capcom title? Then you better put some respect on X-Men: Children Of The Atom's name. The fast-paced fighter bridges the gap between early Street Fighter titles and later Marvel Vs. Capcom ones. Plus, for extra nostalgia points, all the characters are voiced by the '90s cartoon actors.

[dx_custom_adunit desktop_id="RTK_K67O" mobile_id="RTK_5yk0"] As a movie, X-Men Origins: Wolverine is a pile of dung. As a video game, it is surprisingly intense and fun. Do yourself a favor and pick up the "uncaged edition." Before Logan blew everyone's minds, this was the original "Wolverine but for adults" adaptation. You haven't lived 'til you've dismembered a baddy graphically with adamantium claws.

The Wolf Among Us

Comic books love themselves some confusing multiple continuities. Spider-Man: Shattered Dimensions tackled this complicated storytelling device head on, delivering a ballsy, entertaining game that features different renderings of Spider-Man hanging out in the same space. Every version of the webslinger has a unique combat system, making this game feel like four games at once.

[dx_custom_adunit desktop_id="RTK_K67O" mobile_id="RTK_5yk0"] Okay, so the Stallone Judge Dredd is too campy. And the Urban Dredd is too self-serious. Where does that leave us? With Judge Dread: Dredd vs. Death, a wildly entertaining shooter that feels like Fortnite meets TimeSplitters written by Frank Miller. It's the perfect multiplayer shooter to introduce to your friends who've played them all.

Sam And Max Hit The Road

Made squarely in the golden age of LucasArts point-and-click adventures, Sam And Max Hit The Road is effortlessly funny. But it also requires its players to think critically. You may have to stare at a screen for a hundred minutes figuring out how to solve a particular puzzle. But once you solve that particular puzzle, goshdarn will you feel good.

[dx_custom_adunit desktop_id="RTK_K67O" mobile_id="RTK_5yk0"] Looking for a comic book video game that feels like Spawn but somehow even darker? Check out The Darkness (dark is even in the dang name!), an FPS in which you harness the power of spooky demons to do your violent, vicious bidding. Although if you called them "spooky demons" to their spooky faces, they'd probably spooky kill you.

Would you like to play Grand Theft Auto but as The Incredible Hulk? Of course you would. The Incredible Hulk: Ultimate Destruction offers you this singular pleasure, boasting open-world action where you can smash what you please. It's not unlike the more well known Infamous, but has brighter aesthetics and, you know, the Incredible friggin' Hulk.

A game so violent that publisher THQ had to re-edit certain kill sequences to avoid an Adults Only rating. If you like your comic book video game action nice and brutal, The Punisher is what you're looking for. It plays like a less stylized and more blunt Max Payne, with Thomas Jane doing admirably stoic work as the title character.

[dx_custom_adunit desktop_id="RTK_K67O" mobile_id="RTK_5yk0"] God, the Scribblenauts games are fun. They're basically magic: You can write in any noun you could possibly think of, and the game wills it into existence. How could you improve them? Oh, by adding charmingly cartoonish depictions of all of your favorite DC characters? Well played, Scribblenauts, you gaming magicians, you.

If you've never played the X-Men arcade game, you are missing out on some important video game and comic book history. It's a bonafide classic of six-player (six players at one time!) beat-em-up action, and it just feels good to be X-Men with your friends. We've lost so many little metal discs on this title, we're basically the crappy version of Magneto.

Right now, Injustice: Gods Among Us is the premiere "DC heroes fighting MK style" title you can play. But it owes its success to an underrated predecessor, Mortal Kombat vs. DC Universe. It plays surprisingly fast-paced, with these beefed up heroes and ninjas slugging the cripes out of each other like your action figure fantasies come to life.

[dx_custom_adunit desktop_id="RTK_K67O" mobile_id="RTK_5yk0"] Yes, The Addams Family originated as a series of comic strips, which for us means they're eligible as "comic book characters". More importantly, it means we can sing the praises of Pugsley's Scavenger Hunt. It's a classic old-school platformer with a refreshingly morbid sense of humor. In other words, it's like if Mario went through a Hot Topic phase, and we mean that as a sincere compliment.

Scott Pilgrim vs. the World: The Game

We're living in a glut of "16-bit retro video games". But for our money, Scott Pilgrim vs. the World: The Game blows them all out of the water with a huge bass guitar boom. It's a thrillingly action-packed beat-em-up with surprisingly deep RPG elements. And its aesthetics, including a catchy score by chiptune pioneers Anamanaguchi, are second to none.

The Arkham Asylum series gets all the acclaim, and for good reason. But y'all are sleeping on Batman: Vengeance, a stylized action game from the creative team of Batman: The Animated Series. It feels like you're playing an episode of the acclaimed show, with beautiful Art Deco aesthetics and voice work that just feels like home.