Zarouhi Mikaelian
10 Things You Might Have Missed From The ‘Game Of Thrones’ Season 7 Finale August 28, 2017 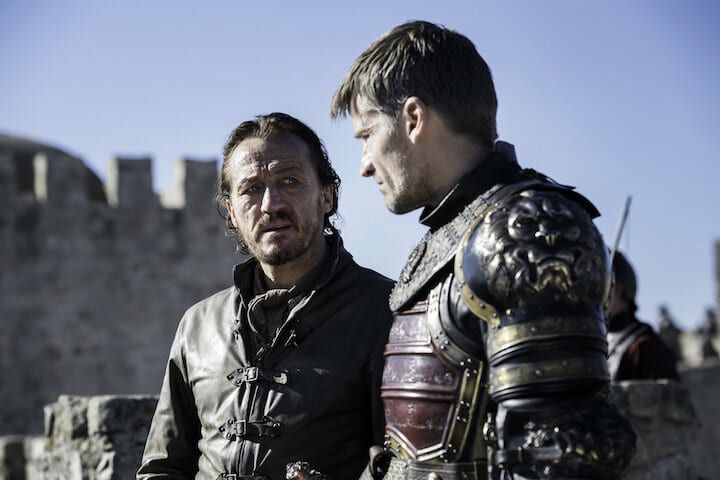 Season 7 of Game of Thrones ended with the crushing sound of 8,000 years of history, ice, and magic crashing to the cold northern floor, allowing the army of the dead to pass into Westeros. But here are some juicy nuggets you may have missed from the Season 7 finale, "The Dragon and the Wolf."

Casting for Rhaegar and Lyanna was perfect.

Arya is the spitting image of her aunt Lyanna, which makes sense because like her niece, Ned's sister had a talent for violence. Rhaegar, on the other hand, is described in the books as being a bigger, stronger, handsomer version of his little brother Viserys.

Jaime rode out of King's Landing alone, wearing all black and making an effort to conceal his identity. It's also the first time he's ridden a black horse on the show. All this after (hopefully) giving up on Cersei's madness for good.

Back to school for the Hound.

Remember the dread you used to feel when summer came to an end and you had to go back to school? That's kinda how Sandor Clegane must feel about returning to King's Landing. Except the bullies there truly do want to kill him. Plus his backpack weighs 200 pounds, has a dead guy inside, and comes with the threat of his being turned into a zombie every time he opens it.

Qyburn is into it.

Terrified and possibly aroused, no one from King's Landing took more interest in the wight than did Qyburn. Is he going to study it to tame the art of reanimation, or will he discover their weaknesses? Heck, is he convinced the army of the dead is the side his creepy ass wants to ride with?

Oh NOW Sam gets it.

Sam brushed Gilly off when she made this earth-shattering find in the transcribed ramblings of High Septon Maynard, but he had that important info tucked away in the old noggin somehow, and it proved useful in this conversation with Bran.

Finally, the answer to everyone's question about Theon's junk.

Ever since Season 3, overly curious GoT fans have wondered, what EXACTLY did Ramsay Bolton take from between Theon's legs—was it the sausage, or the sausage AND the potatoes. This Greyjoy beach brawl gave us the answer.

... is there something more to his following the courtship of the aunt and nephew pair? We didn't get to see the end of his meeting with Cersei. Is it possible that he knows she's lying about her promise to help in the fight against the army of the dead?

Is the Night King a Targaryen?

Because he looks right at goddamn home atop an ice dragon. His dragon riding skills also fit the theories that he either is Bran on a different timeline, or at least possesses the same warging (control of animals) and greenseeing (seeing through time and space) abilities as Bran.

Just before his death, Littlefinger briefly became every Game of Thrones fan when they heard Season 8 might not come out until 2019. Hurry up with that ish, HBO.