10 Things You Might Have Missed From ‘The Spoils Of War,’ S7E4 Of ‘Game Of Thrones’ 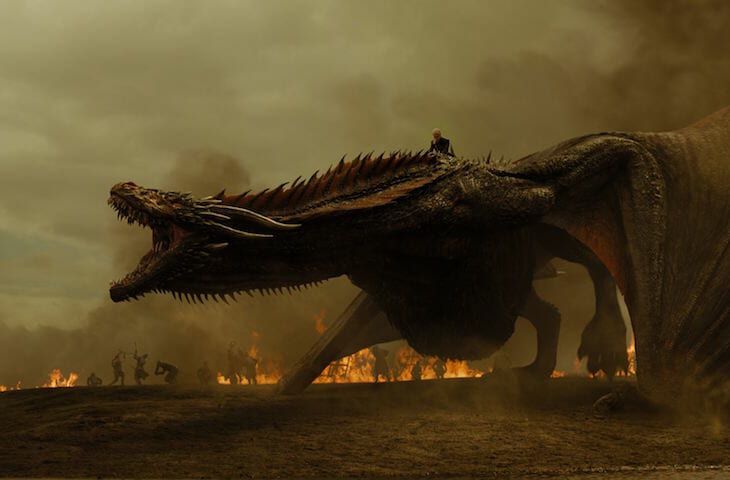 Drogon turned up the heat in "The Spoils of War," the fourth episode of Season 7 of Game of Thrones. But here are 10 little nuggets of fascinating knowledge tucked amid the cave hieroglyphics and barbecued Lannister soldiers that you might have missed.

Something Jon Snow actually knows about.

Daenerys was shocked to find out Missandei and Grey Worm got it on without the use of male genitalia. Jon's Free Folk lover Ygritte can attest to such a possibility—or could have if not for Ollie. Dammit, Ollie.

The same patterns the Children of the Forest drew inside the cave on Dragonstone have appeared on the show before: The White Walkers scattered victims' bodies in one pattern in the season premiere, then they created the other pattern in horse carcasses at the Fist of the First Men in the third episode of Season 3; in a Bran flashback, we learned stones rest (or once rested) in a spiral pattern around the large weirwood tree where the Children of the Forest created the White Walkers.

Jon said the same thing to Mance Rayder when the leader of the Free Folk wouldn't kneel to Stannis Baratheon. That got Mance burned at the stake and shot with an arrow. Good luck, JS.

Lord Baelish thought he could curry favor with Bran like he did Robyn Arryn, with gifts. Instead he had the words he used to justify his actions thrown back in his face by the all-seeing three-eyed raven.

If only Sansa knew that it wouldn't be the first time.

Something's in store for Dickon.

This is the second time this season the writers have used this joke, which means we should probably know his name, which means he'll probably play a larger role in the plot going forward.

King Robert knew what was up.

Bobby B uttered these words to Cersei when the idea of a Daenerys siege was so unlikely most didn't consider it an even remote possibility.

He became the Kingslayer when he sacrificed his reputation to save thousands of innocent King's Landing lives by killing the Mad King. He was prepared to sacrifice his life to kill his daughter, Daenerys, to save thousands more—even if he had killed Dany with his spear, Drogon would have flambéed his ass.

Jaime made like the poor Tarly kid who tried to end Robert's Rebellion years before he became a fat drunk. Thankfully for the Kingslayer he didn't suffer the same face—crushed by Bobby B's war hammer.

The things Jaime does for love.

In the series premiere, Jaime tried to kill Bran to protect his, uh, over-the-top love for his sister Cersei. It looks like his having to clean up the mess from her ascension to Queen Cersei could bestow him a similar fate (though, let's face it, if the show was going to kill Jaime at this moment, they'd have let him die by riding a horse into an oncoming stream of dragon fire, no?).