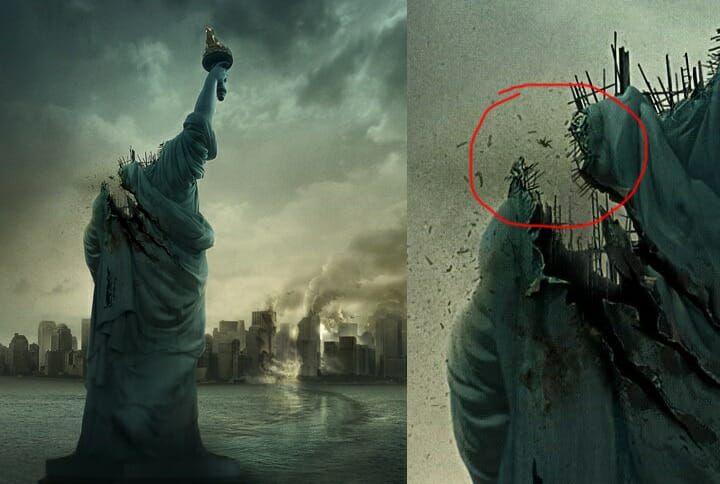 You definitely had at least one of these posters hanging in your bedroom or dorm room. Maybe even for years. But you probably never looked close enough to notice its barely hidden Easter eggs. So read on for 13 cool secrets hidden in iconic movie posters.

A fiery image of Indiana Jones in front of the crystal skull. Seemingly normal right?

[dx_custom_adunit desktop_id="RTK_K67O" mobile_id="RTK_5yk0"] But upon further inspection, you can notice a demonic figure in a hooded robe, embedded in the nose of the skull.

The Silence of the Lambs

But if you zoom into the skull, you can see it’s not a skull at all! It is in fact an image of seven women creating the formation of a skull. This is actually a small version of the famous photograph by Phillipe Halsman of one of Salvador Dali’s works.

The Silence of the Lambs

One of the most iconic thriller film posters out there, shows an image of what looks like a skull on top of the moth.

But if you look closely between the brothers, you can see a two star review from The Guardian, which is the actual rating that The Guardian gave for the film.

The classic horror film has an iconic poster art featuring a sinister jack-o-lantern face with a knife-wielding hand.

[dx_custom_adunit desktop_id="RTK_K67O" mobile_id="RTK_5yk0"] If you look closely at the hand, you can see an outline of a face that looks like it’s screaming. The designer of the poster art said that the face was completely unintentional, but it definitely worked in its favor!

This classic Disney animated film features a variety of content pertaining to the movie, including the man-made treasures that Ariel finds from the ship and all of her friends.

But if you look closely at the back where the kingdom is, you can see a building that looks awfully like a penis. Okay, let’s be real. That is straight up a penis and even the original artist has admitted to intentionally placing it there.

[dx_custom_adunit desktop_id="RTK_K67O" mobile_id="RTK_5yk0"] In the Gremlins poster, we see a boy holding a box containing a tiny gremlin.

But if you look closely at the boy’s jeans, you can notice a very well-known symbol on the button; the iconic image of E.T. being flown across the moon on the bike!

This awesome poster design shows a ground perspective looking up, with the debris from the structures creating the bat symbol.

[dx_custom_adunit desktop_id="RTK_K67O" mobile_id="RTK_5yk0"] But if we look to our far left, we can see a blurred image of something that looks like it’s flying at a rapid speed. A forum poster from Movie and Game Thoughts noticed that it closely resembled the Superman logo when overlaying the symbol from an angle. And if you notice the direction in which the lines blur, you can see that whatever this object is, is flying upwards, as opposed to descending downwards. It’s also the only rapidly moving item in the entire photo.

This is a very plausible theory since both are DC comic characters. Was this a possible easter egg at the time for the Batman vs. Superman movie?

Disney’s Brave teaser poster, featuring a landscape with a stone monument with the name of the film.

Disney is no stranger to these easter eggs in their movies and posters. If you look in the back of the stone formation, you can notice the bear from the movie!

Harry Potter and the Order of the Phoenix

[dx_custom_adunit desktop_id="RTK_K67O" mobile_id="RTK_5yk0"] The official poster for Harry Potter and the Order of the Phoenix featuring Harry, Ron, and Hermione.

Harry Potter and the Order of the Phoenix

If you look closely at Hermione’s hair, you can notice something that looks like letters embedded into her hair. In fact, if you outline it, it fits to spell out “SEX”.

An up close image of Jennifer Lawrence and Chris Pratt grace this cover of the 2016 sci-fi Passengers.

[dx_custom_adunit desktop_id="RTK_K67O" mobile_id="RTK_5yk0"] But if you look below the Passengers title, you can notice a couple of design elements that are not simply just geometrical designs but are in fact Morse code for “S.O.S” which is an acronym for “save our souls” or “save our ship”. Although there is no real definition of S.O.S., the general letters were used in the Navy in the early 1900’s as a way to attract attention to other ships as a signal of distress.

This Disney animated film depicts the animals of Zootopia working in the busy and bustling city that is heavily based off New York City.

But if you zoom far into the image, you can see the little mice driving and even a little mouse cop who pulls over a driver!

[dx_custom_adunit desktop_id="RTK_K67O" mobile_id="RTK_5yk0"] Ben Affleck is featured on this cover of David Fincher’s thriller drama Gone Girl, which is based off the novel of the same name by Gillian Flynn.

Warning: The following description contains spoilers of the film.

A few readers of the original book have pointed out that the image of the eyes has the same texture as the bottom portion of the poster’s image, where we can visibly see a TV news headline banner strewn across. Book readers realized this was symbolic of Amy being alive and watching her own “murder” story unfold on television.

This revamped poster for the Disney classic animated film The Lion King, shows an image of Simba in the horizon, as Mufasa is seen as a ghostly image, watching over from the skies above.

[dx_custom_adunit desktop_id="RTK_K67O" mobile_id="RTK_5yk0"] But is it all innocent? Mufasa’s facial outline looks an image of a woman from her backside.