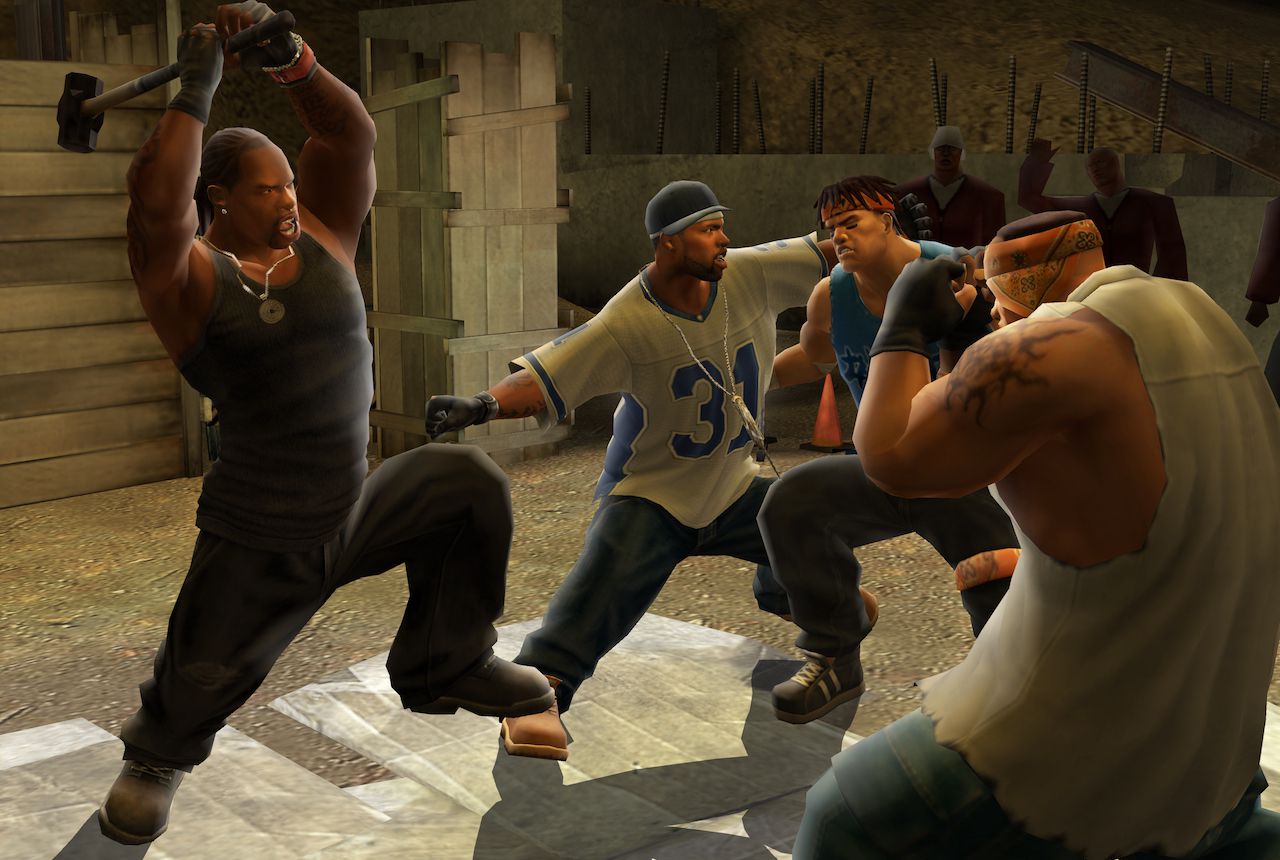 Love hip-hop and video games? Then prepare to have your mind blown. Because we rounded up best and most funnest hip-hop video games of all time. So turn the music up in your headphones and let's go...

"ToeJam and Earl" for the Sega Genesis is arguably the first intersection between video games and hip-hop culture. The two title characters are hip-hop-obsessed aliens, and the soundtrack is worth spitting bars over to this day. The title spawned three sequels, including 2019's "ToeJam and Earl: Back in the Groove."

[dx_custom_adunit desktop_id="RTK_K67O" mobile_id="RTK_5yk0"] Released in 1995 by Motown Games, "Rap Jam: Volume One" put the hottest rappers of the time on the basketball court. So if you ever wondered who had a better finger roll between Queen Latifah and Warren G, this is the game for you. The "Volume One" moniker was a little too confident, as this was the would-be franchise's only entry.

"PaRappa the Rapper" changed everything by putting rapping at the core of its gameplay mechanics. Using your PlayStation controller, you tap buttons in rhythm, making the title character rap his heart out. The game holds up to this day, with catchy and bizarre tunes ready to get stuck in your head.

Have you not experienced the opening song to "Donkey Kong 64," the iconic simian's entrance onto the Nintendo's 64? Depending on who you ask, it's either miserable schlock, campy fun or somewhere in the middle. "DK Rap," as it came to be known, apes old-school styles when introducing each character.

[dx_custom_adunit desktop_id="RTK_K67O" mobile_id="RTK_5yk0"] The Wu-Tang Clan and fighting video games seem like a perfect fit. The Staten Island rap group was always influenced by martial arts films and Eastern-flavored pop psychology, so why not smush it all together? Plus, Paradox Development created a revolutionary four-player fighting format for "Wu-Tang: Shaolin Style." Unfortunately, critical and fan reaction was mixed.

In "Jet Set Radio," you play as Beat, a member of a radical inline skater/grafitti artist collective. You do dope tricks, make awesome art, run from the police and listen to some of the sickest video-game music you'll ever hear, a fusion of hip-hop, electronica, funk, and even some disco. Hip-hop luminaries like Mixmaster Mike and Jurassic 5 provided tracks for the game.

Combining the vibe of "Rap Jam: Volume One" with modern controls, the "NBA Street" series was a huge '00s success. The two-on-two games moved quickly and balanced strategy with accessibility. Plus, the game's aesthetics screamed hip-hop, from the old-school-leaning soundtrack to the announcer's swagger.

[dx_custom_adunit desktop_id="RTK_K67O" mobile_id="RTK_5yk0"] If "PaRappa the Rapper" is an underground mixtape, then tss PlayStation 2 sequel is a major-label debut. It's more refined and boasts higher production value, but doesn't sacrificed its predecessor's identity. In fact, many of its tweaks offer richer gaming experience: Depending on how well you do, the lyrics grow easier or harder, making for a unique playthrough every time.

In the mid-'00s, hip-hop video games got dark and gritty. "Def Jam Vendetta" was grimy, violent and intense. This game threw a roster of officially licensed hip-hop artists and figures into the wrestling ring to beat the crap out of each other. It's fast-paced, has a bumpin' soundtrack, and boasts as much melodrama as any decent pro-wrestling storyline.

In "Streets of LA," you basically play through a '90s corrupt-cop movie (we mean that as a compliment), with gangsta rap underscoring every moment. Stars in the game include Christopher Walken, Gary Oldman, Michelle Rodriguez and freakin' Snoop Dogg.

[dx_custom_adunit desktop_id="RTK_K67O" mobile_id="RTK_5yk0"] Here's the high point of the Def Jam video-game franchise. Sometimes bigger is better, and "Fight for NY" expands on everything good in "Vendetta." Wrestling matches became brutal street fights. Intead of just a few rappers, it has every rapper famous in 2004. And the melodramatic storylines grew into the most operatic hip-hop-meets-Shakespeare intensity you can imagine.

Every entry in the "Grand Theft Auto" franchise is a new high point. But for hip-hop heads, "San Andreas" is the apex. You get to play through a fictionalized version of '90s LA, ground zero for the culture's golden age. The game weaves through issues of race, crime, and police corruption while bumping the hardest tracks of the time.

Remember when 50 Cent did everything? Not just musically, either. The dude sold Vitamin Water. Remember that? "50 Cent: Bulletproof" feels like a play in that strategy. He did everything else, so why not let him topline a gritty action game? The title also features Eminem and Dr. Dre in acting roles. But while critics appreciated its aesthetics, they found the gameplay itself lacking.

[dx_custom_adunit desktop_id="RTK_K67O" mobile_id="RTK_5yk0"] Taking the hip-hop seasoning of its predecessor and making it the whole darn meal, "True Crime: New York City" ruffled feathers not for its gritty hip-hop soundtrack but for its depiction of New York City cops as inherently evil. A Hong Kong-set sequel was planned before the "True Crime" franchise was scrapped. That game did see release, though, as "Sleeping Dogs."

Instead of feeling like a jacked-up wrestling game, "Icon" takes something like "Street Fighter" and fuses it with something like "PaRappa the Rapper." In other words, you beat people up in rhythm with the soundtrack. An interesting idea to be sure, but the execution was muddled and confusing. And yet, it's not the franchise's nadir.

"Afro Samurai" features a snaky soundtrack produced by RZA and bloody, hack-and-slash gameplay. Is this a better execution of what "Wu-Tang: Shaolin Showdown" promised so many years ago? Sadly, the game received mixed reviews from critics, and an episodic sequel was of such poor quality, it was cancelled in the middle of production.

[dx_custom_adunit desktop_id="RTK_K67O" mobile_id="RTK_5yk0"] "50 Cent: Bulletproof" was a bit of a surprise hit, and Mr. Jackson was still in his "do whatever" career phase. So where did they put him for the sequel, "50 Cent: Blood on the Sand"? Another hardboiled cityscape? Or an unnamed Middle Eastern country that was an obvious stand-in for America's Bush-era conflicts? If you guessed the latter, you're insane. But you're also correct.

Capitalizing on the success of "Guitar Hero" "DJ Hero" took hip-hop games into a new era of casual accessibility. As long as you consider an expensive turntable controller to be casual and accessible. The game's mechanics were less intuitive than its rock cousins. But once you got the hang of it, it felt dope to spin your way through a series of genre-hopping mashups.

The nadir of the Def Jam gaming franchise, "Def Jam Rapster" has nothing to do with the fighting trilogy. Instead, it promises a karaoke party at which the player sings along to their favorite hip-hop records. It was wrought with problems, including legal issues that shuttered the official website. The site included many of the game's required features. Which means if you still own this game, you literally can't play it anymore.

[dx_custom_adunit desktop_id="RTK_K67O" mobile_id="RTK_5yk0"] "The Hip Hop Dance Experience" is the logical rap extension of the casual music party game phenomenon of the early 2010s. You follow onscreen characters' moves with matching moves of your own, either on Wii or an Xbox 360 Kinect. Artists include Outkast, Nicki Minaj, Run-D.M.C. and freakin' Snoop Dogg.

In 2013, the "NBA 2K" franchise got a hip-hop overhaul. Jay-Z executive-produced the soundtrack, with his name and clout prominently featured in the game's advertising. Jay included several of his own tracks in the mix, but also showed love to former friend Kanye West, NYC legends like Mobb Deep and Puff Daddy, and West Coast heroes like Too $hort.

To call "Only One" a hip-hop game is a bit of a misnomer. Kanye West created it, but it has nothing else to do with rap. Instead, you play as West's late mother, Donda, exploring the languid pleasures of a pink-and-blue Heaven, solving puzzles and soaking in the atmosphere. After its trailer premiered at 2016's E3 expo, the game got stuck in development limbo.

[dx_custom_adunit desktop_id="RTK_K67O" mobile_id="RTK_5yk0"] Several emote dances in "Fortnite" come straight from hip-hop. The "Tidy" is Snoop Dogg's. The "Swipe It" is 2 Milly's. The "Hype" is BlocBoy JB's. BlocBoy JB is suing Epic Games for theft of intellectual property. Chance the Rapper tweeted his support, saying, "Black creatives created and popularized these dances but never monetized them. Imagine the money people are spending on these Emotes being shared with the artists that made them."

Released for the Nintendo Switch in 2017, "Floor Kids" mixes a casual vibe with pure hip-hop in the core of its mechanics. It's sort of like if "PaRappa" was about breakdancing, but with one twist: Nobody's telling you what moves to hit. It's on the player to customize the dopest combos to get the most points.

In "Mad Verse City," you write your best battle rap lines and listen as robo-rappers recite them in dry text-to-speech. Then your friends vote on which is the best. As the newest game on this list, it shows how ingrained into mainstream culture hip-hop has become, thanks in part to games like this.