These Rip-Offs Of Popular Blockbuster Movies Are Completely Shameless 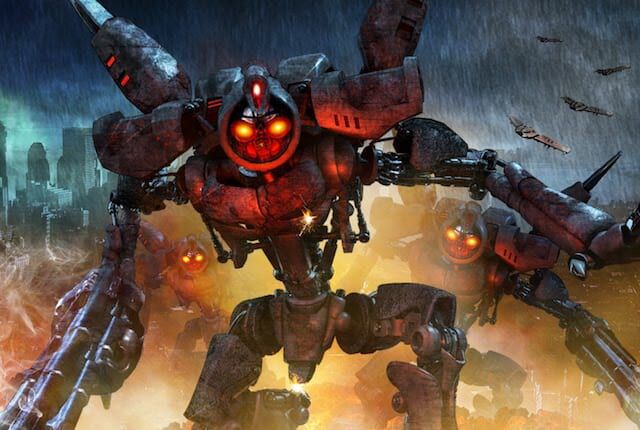 Contrary to popular belief, Hollywood isn't a land of originality. It's been recycling, remaking and rebooting the same ideas for years. Because if the one thing film execs know it's to force-feed ideas to audiences. And with all the garbage that Hollywood makes, cheap knockoffs of big blockbusters never surprise us. So these are the "mockbusters" that blatantly cash in on something they’re not. And they're so shameless, we actually kind of want to watch them.

When giant monsters attack from the depths of the ocean, the U.S. government decides its only course of action is to build equally giant robots to fight them. But the monsters come from the ATLANTIC rim, so this movie is totally different from "Pacific Rim."

Snakes on a Train

[dx_custom_adunit desktop_id="RTK_K67O" mobile_id="RTK_5yk0"] 2006’s “Snakes on a Plane” wasn’t exactly Oscar material, but it still managed to spawn its own rip-off, which came out the same year. And though the story was all its own (a Mayan curse! Snakes hatched inside a body!), “Snakes on a Train” could not rip off the profound magic of Samuel L. Jackson.

If Tony Stark were actually an average college student and his Iron Man suit a bio-mechanical trap that he couldn’t get out of, you’d have the plot to 2009’s “Metal Man.” See, it’s just like “Iron Man,” only more relatable for us poor folks.

Imagine Marvel’s “Thor,” but at a fraction of the budget and starring Richard Greico and the woman who played Anck-Su-Namun in 2001’s “The Mummy.” Congratulations: You’ve got Syfy's 2011 TV bomb “Almighty Thor.”

[dx_custom_adunit desktop_id="RTK_K67O" mobile_id="RTK_5yk0"] Lance Henriksen is a damn treasure in the world of direct-to-video movies, and his performance in “The Da Vinci Treasure” is no exception. With the fate of Christianity hidden in the works of Leonardo Da Vinci, only Henriksen’s villainy stands in the way of true enlightenment.

Allan Quartermain and the Temple of Skulls

Who could have guessed the entire “Indiana Jones” franchise was actually based off the “Allan Quartermain” novels, which were written by H. Rider Haggard between 1885 and 1927? Who’s ripping off who here, really?

“Alien vs. Hunter” was released straight to DVD an entire week before “Alien vs. Predator: Requiem” hit theaters in 2007, which makes it the clear winner in the block/mockbuster battle, but still leaves us clueless as to why anyone would want to rip off “AvP” in the first place.

[dx_custom_adunit desktop_id="RTK_K67O" mobile_id="RTK_5yk0"] If you’re a fan of Ridley Scott but could do without all of the space exploration in his alien films, why not invest your time into “Alien Origin,” a movie that sets up the idea of an alien race being humankind’s ancestors, but takes place entirely on Earth? In a remote jungle. With Mennonites.

What’s Up: Balloon to the Rescue

As if you couldn’t tell just by its poster, this Video Brinquedo knockoff is trying desperately to capitalize on the heartfelt sincerity of the Pixar hit “Ratatouille." Just kidding. That would be one of Video Brinquedo’s other animated hits, “Ratatoing.”

Another of Video Brinquedo’s stellar works, this movie tells the story of a panda who wants to be a dancer but winds up being mistaken for a powerful fighter. The difference here, aside from production value, is the lack of animal sidekicks. Because what’s a fighting panda without his sidekicks?

[dx_custom_adunit desktop_id="RTK_K67O" mobile_id="RTK_5yk0"] “Chop Kick Panda” is a near identical knockoff of its DreamWorks cousin, but with the added bonus of being produced by Gaiam, a company that specializes in making yoga mats. Let that one sink in.

2012’s “Brave” was stunning, both in its animation and storytelling. “Kiara the Brave,” on the other hand, looks like someone took Pixar’s masterpiece and recast it with the ogres from “Shrek.”

“Frozen Land” is the unfortunate product of DVD rebranding, having started its animated journey as “The Legend of Sarila,” a story that has literally nothing to do with its namesake. It’s also the unfortunate subject of a lawsuit brought against its distribution company by Disney, so that’s fun.

Hello again, Lance Henriksen. As the villainous (shocker!) Long John Silver, Henriksen fights his way across the ocean in an effort to steal buried treasure. What this film lacks in immortal seamen, it makes up for in giant insects, because bugs > barnacles.

This found-footage flick rips off its plot from the 2007 film “Paranormal Activity.” Or is it “V/H/S?” Or maybe “REC?” Shit, it’s hard to keep track of these things.

[dx_custom_adunit desktop_id="RTK_K67O" mobile_id="RTK_5yk0"] Another DVD rebrand, “Apocalypse Z” started out as the zombie action movie “Zombie Massacre,” in which a team of soldiers must defend against a Romanian zombie outbreak, but we don’t think any amount of rebranding will make this thing even remotely watchable.

If the line, “Dead or alive, you’re coming with me” is actually uttered in this thing, we f---ing quit.

“Spring Breakers” was a campy masterpiece that gave us an Oscar-caliber James Franco performance. “Bikini Spring Break” is like “Girls Gone Wild” mixed with more “Girls Goe Wild.” The need to advertise Robert Carradine is icing on the cake here.

[dx_custom_adunit desktop_id="RTK_K67O" mobile_id="RTK_5yk0"] Giant alien robots that can “transmorph” into automobiles and aircrafts. Never has there been a more original idea in the history of modern cinema.

Giant alien robots that can “transmorph” into automobiles and aircrafts. The SEQUEL.