Why Is Every Movie Poster Orange and Blue? 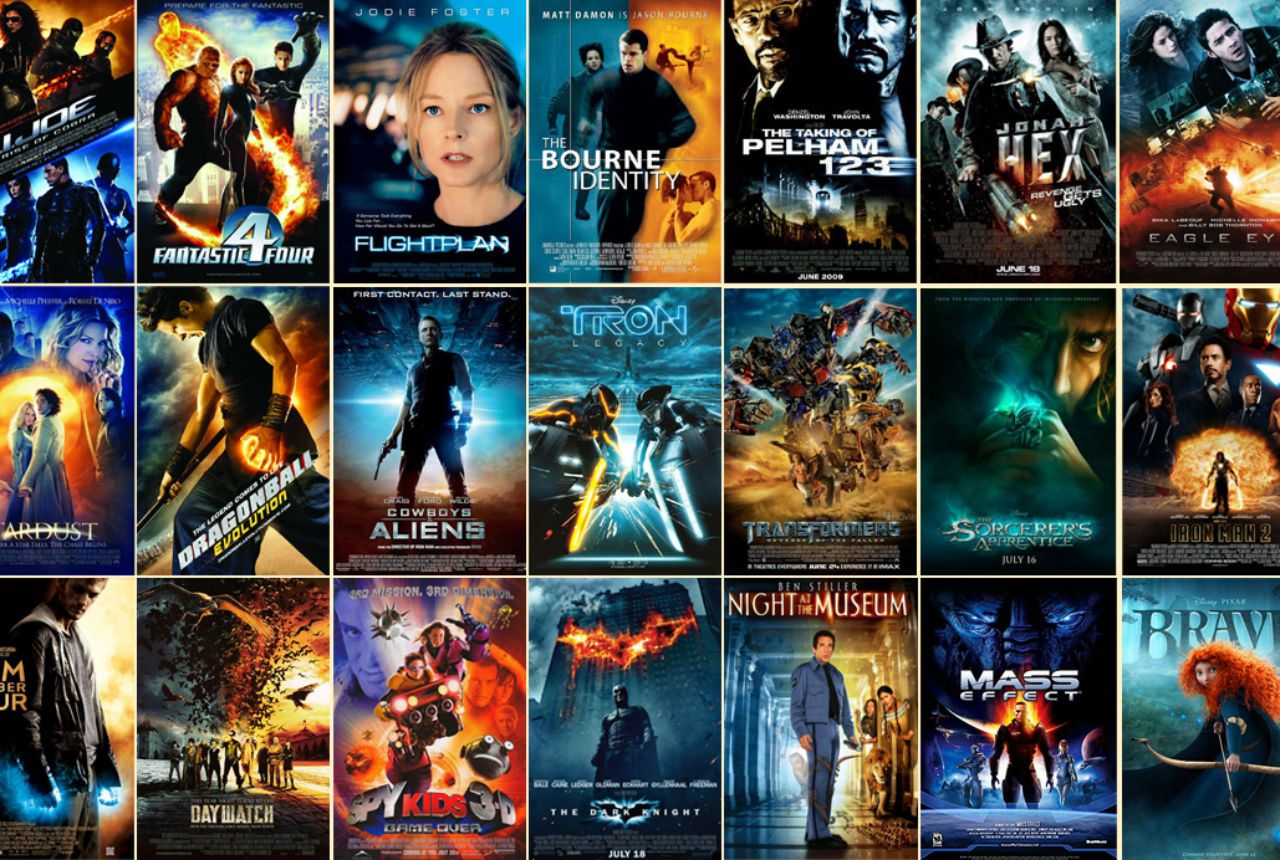 Have you gone to the movies and asked, "Why are all these posters orange and blue? And also, am I bothering anyone by asking this out loud?" We can't speak to that last part. But we can help explain the phenomenon of orange-and-blue movie posters...

First, a bit of color theory 101. Flesh tones in cinema often fall into an orange range of colors. And if you look at a standard color wheel, you'll notice a blue range of colors lies on the opposite end. In color theory, these types of opposing colors are called "complementary."

[dx_custom_adunit desktop_id="RTK_K67O" mobile_id="RTK_5yk0"] When the human eye sees complementary colors next to each other, it's naturally pleasing. The colors "pop." Another common example of this phenomenon is purple and yellow. Red and green are also complementary.

The Empire Strikes Back

So if orange-ish people are the subject of films, and designers want them to pop as much as possible in the films and their ads and posters, it makes sense to use complementary shades of blue. But that's not the only design trick in the book. So how did this spread and multiply everywhere?

Blame technology. For decades of film history, a movie's natural photographed image received a photochemical color grade. In other words, the final filmstrip you saw projected in theaters got its colors from tactile, touchable, physical chemicals, not unlike the process of developing film in a darkroom.

[dx_custom_adunit desktop_id="RTK_K67O" mobile_id="RTK_5yk0"] But then, in 2000, everything changed. That's when the Coen brothers made "O Brother, Where Art Thou?" When they shot the dusty-looking, sepia-tinged film with legendary cinematographer Roger Deakins, the cinematography wasn't anywhere near the final product's hue.

Joel Coen described the original look of the "O Brother" locations as "greener than Ireland." The Coens gave Deakins and their the post-production team a mission. "What we didn’t want was a traditional sepia," Deakins said. "The guys had told me they wanted the feel of an old, faded postcard and particularly to get rid of the greens."

The Adventures of Tintin

It was important to maintain the rich blues while also adding the orange-ish sepia hues. The production team tried the traditional photochemical route first. But their results were less than desirable. Colorist Jill Bogdanowicz said, "Color timers in a traditional lab would have used a heavy yellow-red color correction, which would have changed the blue in the sky and the denim jeans. So, the only way to achieve the look was digitally."

The Hobbit: The Battle of the Five Armies

[dx_custom_adunit desktop_id="RTK_K67O" mobile_id="RTK_5yk0"] When "O Brother, Where Art Thou?" came out, it was the first film to use an entirely digital color grade. And it changed the game for the film industry. Movie productions favor efficiency and cost-effectiveness, and the digital workflow is better for both. Every movie you'll see in a theater this year will probably be graded digitally.

The Taking of Pelham 123

We can't psychoanalyze every single color correcter in the film industry. But we can guess that the naturally pleasing aesthetics of complementary colors combined with the efficiency of digital grading results in the quick-fix color trend of orange-and-blue designs. Why spend more time on a design when you can bang out something proven by science to please the human eye?

Michael Bay's "Transformers" franchise is the apotheosis of orange-and-blue color grading. When a team of post-production engineers at MIT designed an algorithm for automatic, AI-boosted color corrections, they used information from the first "Transformers" as their prime example for this particular look. Their results are very orange and blue.

[dx_custom_adunit desktop_id="RTK_K67O" mobile_id="RTK_5yk0"] Plenty of movies still use unique color palettes on a scene-by-scene or even shot-by-shot basis. But part of the problem with digital grading comes when one can, as one often does on a computer, easily copy and paste a single look. For a colorist on a tight deadline, the orange/blue fix can solve a lot of problems.

Night at the Museum

The phenomenon doesn't just happen in big-budget action genre films. Even comedies like "Night at the Museum" get the orange-and-blue treatment, effectively putting the stakes of Ben Stiller's educational hijinks on the same level as Michael Bay's robot destruction.

Not every purposeful use of orange and blue is bad. "Mad Max: Fury Road," which critics praised for its photography, uses the complementary palette in literally every single shot, juxtaposing the dusty deserts and explosive pyrotechnics with boundless blue sky. The look works because it feels intentional. Less like a hurried fix, more like a considered choice.

[dx_custom_adunit desktop_id="RTK_K67O" mobile_id="RTK_5yk0"] The blue/orange fusion isn't based only on color science. There are also sociocultural connotations humans assign to these colors. Water versus fire. Land versus sky. Technology versus nature. An even-tempered person versus an angry person. We naturally bring that binary baggage to these colors and, subsequently, these movies.

Stefan Sonnenfeld, a colorist who worked on the "Transformers" franchise, believes every film has its own unique color vocabulary. "There's no specific colour decision-making process where we sit in a room and say, 'We're only going to use complementary colours to try and move the audience in a particular direction – and only use those combinations,'" he told The Guardian.

Sometimes, "one size fits all" digital color correction comes from necessity. According to Sonnenfeld, "there are so many different formats that are being used, from film stock to digital capture, semi-professional to consumer cameras. Blending all that stuff and having it work cohesively is a very important part of the process." Digital color correction is a huge part of that blend.

[dx_custom_adunit desktop_id="RTK_K67O" mobile_id="RTK_5yk0"] When it comes to a film's color temperature, the lines of authorship between a director, cinematographer and colorist are blurred. Sonnenfeld admits cinematographers often aren't around for the color-correction process of post-production because they're already off working on another film. So it may be entirely up to the colorist(s) to call those shots.

G.I. Joe: The Rise of Cobra

"The Matrix" franchise demonstrates the evolution of color grading in film. The 1999 original featured a subtle green hue in its Matrix scenes but a blue-and-grey look in "real world" scenes. All that was done photochemically, necessitating exact intention. On the other hand, scenes in "The Matrix Reloaded" and "The Matrix Revolutions" drown in green because by then the filimmakers could insert it digitally.

Here's a more anecdotal trend we've noticed. Modern action flicks graded to orange and blue tend to be "dark" and "gritty," and "intense." Even in properties designed for children. Josh Trank's "Fantastic Four" suffered from this chronic "adultitis," sacrificing fun for edginess. Trank insists his original cut of the movie is better. Perhaps its color grading was more subtle too.

[dx_custom_adunit desktop_id="RTK_K67O" mobile_id="RTK_5yk0"] While filmmakers effectively whitewashed the main cast of "Dragonball Evolution," they failed to whitewash the poster's cliched orange-and-blue coloring. This design's power level is way below 9,000.

The orange-and-blue look is an American trend, dripping with "Hollywood blockbuster" intensity. So it's interesting to see it spill over into foreign films trying to capture the big-budget thrills of American cinema. Take Timur Bekmambetov's "Day Watch" for example. It's an idiosyncratic vampire-fantasy-action flick from Russia, but it's color coded like your average Michael Bay picture.

Statistician and Stanford masters student Edmund Helmer looked past movie posters and films themselves to prove the ubiquity of orange-and-blue coloring. After downloading and analyzing 312 movie trailers' different frames and color temperatures, he concluded the highest level of color temperatures used in trailers was orange. A close second? By now, you can probably guess. Blue.

[dx_custom_adunit desktop_id="RTK_K67O" mobile_id="RTK_5yk0"] In 2012, Vijay Pandurangan, a software engineer, took it upon himself to analyze color data from 35,000 movie posters, from 1941 until that time. His conclusion? A definite trend that movie posters have systematically become more dark and more blue.

Guardians of the Galaxy Vol. 2

Ultimately, digital color correction and color theory are just some of the tools in a filimmaker's utility belt. What works for one project won't work for another. And when color grading works best, according to Sonnenfeld, you won't notice it at all. "It's a latent tool," he says. "It's got this hidden power. And you don't necessarily realise how important it is until it's done incorrectly."