The Most Ridiculous Comic Storylines Ever Written

Jen Arbues
The Most Ridiculous Comic Storylines Ever Written June 25, 2018 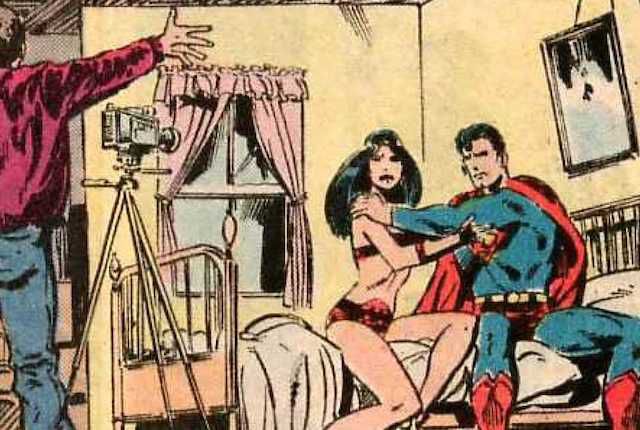 What are the most ridiculous comics stories of all time?

The comics industry has been around for decades, so it should come as little surprise that there are at least one or two storylines out there that could be considered – how should I put it? – unsuccessful. Maybe they’re an obvious sign of their time. The ‘70s was a weird decade, after all. Or maybe they involve beloved characters doing things they would never really do, all for the love of controversy. Or maybe, and we’re willing to bet this is the one that’s mostly true, maybe the storylines are just so batshit bonkers that no one has any real clue what’s going on. Truth is, a comic doesn’t have to be good to make it to our screens. Just look at Freeform’s Cloak and Dagger. Thankfully, the majority of the time, the most ridiculous comics are even too much for Hollywood.

Ultimatum was meant to be a huge Marvel crossover event, which centered on Magneto’s attempt to destroy the world following the death of his children, Scarlet Witch and Quicksilver. It pretty much succeeded in only one thing: illustrating the deaths of nearly every Marvel superhero in the cringiest ways possible (there’s a whole, being eaten alive chain that we’d like to forget). But its worst offense has to be the fact that the few heroes who did manage to survive included the Fantastic Four.

[dx_custom_adunit desktop_id="RTK_K67O" mobile_id="RTK_5yk0"] DC’s Arsenal started out as a Robin ripoff for fellow billionaire vigilante Green Arrow. At some point in time, he was given an edgier backstory — that of a full-blown heroin addict. Although he recovered, in 2010 we got Justice League: The Rise of Arsenal, which was anything but. Unless you consider a full-blown hallucination involving a dead cat in place of a human daughter, that is.

If the idea of a group of evil fighting mutants with powers that range from telekinesis to laser eyes to blue-hued ape-like whateverthef— Beast actually had goes over your head, then X-Men: Holy War would be like the comic equivalent of having a Pokémon-induced seizure. Crucified teenagers. A plot to have a demon take over the Vatican. Exploding communion wafers. Actually, you know what? Holy War should definitely be adapted for the screen.

When that couple could stop time by having sex

In Image’s Sex Criminals, we meet Suzie and Jon, two seemingly average individuals who discover they have the power to freeze time at orgasm. Being the entrepreneurial types they are, the pair decides to use their “gift” to rob a bank. And if you think the concept is too much for the small screen, think again: it was announced in 2015 that the time-stopping lovers would be making their way to TV.

When they made Pinocchio a vampire slayer

[dx_custom_adunit desktop_id="RTK_K67O" mobile_id="RTK_5yk0"] Ten years ago, vampires were all the rage in pop culture. We were still riding the Buffy wave to True Blood territory and were suckers (see what we did there?) for anything with fangs. Enter 2009’s Pinocchio, Vampire Slayer. Nothing says undead slayer quite like a wooden puppet hellbent on avenging his father’s untimely death.

Who needs men of steel or dark knights or Norse gods with magical hammers when you could have a giant western gorilla instead? Six-Gun Gorilla is just that. Except he has the added bonus of super strength and senses, apparently because that’s what happens when one raises a circus gorilla to be an expert marksman. Oh, and he’s heat resistant to boot, because why the f— not.

We’re not sure if it’s possible to have a more depressing Spider-Man storyline than 2007’s Spider-Man: Reign. Seeing our friendly neighborhood Spider-Man as a broken old man torn up about the death of Mary Jane is one thing. Finding out she got radiation poisoning on account of his radioactive spider sperm is another entirely.

[dx_custom_adunit desktop_id="RTK_K67O" mobile_id="RTK_5yk0"] In the early 2000s, DC published its All Star series, which was meant to retell some of the backstories of its most famous characters without having to deal with all of that continuity bullshit. All Star Batman & Robin, The Boy Wonder gave us a Batman who wasn’t just heartless and narcissistic. It gave us a Batman who felt that kidnapping Dick Grayson immediately following his parents’ murder would put the kid on the right track to truth and justice.

That time Marvel used every gay trope ever

While Rawhide Kid deserves some credit for showcasing Marvel’s first openly gay character, the series falls short in just about every other aspect. The Rawhide Kid wasn’t just a gunslinger who happened to be gay. He was Nathan Lane The Birdcage gay. Just in a desert setting.

When Frank Miller proved to be a total racist

Frank Miller’s Holy Terror was intended to be a piece of post-9/11 propaganda. It was also a blatant ripoff of Batman, and also just incredibly awful. Its protagonist — The Fixer — goes around battling cartoonish terrorists in the most violent way possible. But that's okay! Because they’re all just hideous stereotypes anyway, right?

When Ms. Marvel gave birth to her own lover

[dx_custom_adunit desktop_id="RTK_K67O" mobile_id="RTK_5yk0"] Some comics celebrate their 200th issue with big crossovers or world-ending events. The Avengers celebrated its 200th issue by featuring a story in which Ms. Marvel found herself pushing out a baby that actually turned out to be an inter-dimensional being whose only way to freedom involved implanting himself into an unwitting female. And then falling in love with her after the birth. Not at all weird. Not at all rapey.

In Marvel’s Dark Reign, Tigra (a ridiculous enough character as is) found herself in the uncomfortable situation of having been impregnated by the Skrull, an alien race and main enemy of the comic’s previous title. Fearing for the outcome, she chooses to have an abortion. But in comes Osborn, who wants to use her theoretically powerful offspring as a weapon and demands she give birth immediately. Swell guy, no doubt.

By now, we all know that Peter Parker’s first love was Gwen Stacy, who died at the hands of Green Goblin, aka Norman Osborn, aka the father to Peter’s BFF Harry. This is important, because in Spider-Man: Sins Past, it’s discovered that Norman also fathered a set of superpowered twins. With Gwen. And we can never unsee this panel.

Or better yet, when Aunt May spent an entire summer sleeping around

[dx_custom_adunit desktop_id="RTK_K67O" mobile_id="RTK_5yk0"] Remember when Marvel thought it’d be a great idea to try and revive romance comics? And they did it with Trouble, which followed the sexual escapades of Peter Parker’s family members? And it turned out that Uncle Ben was actually sterile and Aunt May had gotten herself knocked up by Richie Parker and then convinced her friend Mary to raise the baby as her own? Remember?

That time Superman almost made a sex tape

What happens when you take a mind-controlling villain exiled from an evil planet for being too depraved, and put him in the path of a couple of well-known DC characters? You get Action Comics #593, which sees Superman getting this close to taking it all off for a camera or two. He stops, of course, on account of his “strong moral fibre,” but still. This. Close.

The one that imagines Batman as a Joker-like psychopath

But 2010’s Nemesis isn’t part of the DC universe. It’s the brainchild of Mark Millar, who’s responsible for writing Civil War and Kick-Ass, two of the greatest modern comic series published. So how did we wind up with a character who uses a bomb threat to keep a woman from aborting her brother’s baby? There’s just so much wtf here.

[dx_custom_adunit desktop_id="RTK_K67O" mobile_id="RTK_5yk0"] So maybe it isn’t fair to include a comic specifically meant for an 18+ audience. But f— it, there’s no way we can’t mention Tarot: Witch of the Black Rose, a series about a warrior witch and her sexy escapades. While the woman getting a vagina transplant that winds up being haunted by its former owner storyline is especially enthralling, we have to say we’re bigger fans of the one in which the main character has her vagina attacked by eels on account of pissing off a mermaid.

That time the Punisher was black

In Punisher #59, Frank Castle finds himself needing to break out of prison for the millionth time and finds a doctor to change his appearance so he won’t get caught again. But the doc’s been doing experiments with melanin and makes the wise decision to adjust Punisher’s face in the worst way possible. No one will ever recognize him as a black man!

Or how about when Lois Lane was black

Look, we get it. The ‘60s and ‘70s were a progressive time in America. Comics felt the need to capitalize on this. But we definitely could have done without 1970’s Superman's Girlfriend, Lois Lane, wherein Lois hops into a magic box that turns her into a black woman for a day, all so she can write a story about Metropolis’ black ghetto, Little Africa.

[dx_custom_adunit desktop_id="RTK_K67O" mobile_id="RTK_5yk0"] Which happened in 2008’s The Ultimates 3. Look, the relationship between Wanda and Pietro has always been portrayed as a little… close. But it wasn’t until The Ultimates 3 that we were forced to suffer through a Wolverine-narrated sex scene between the two. Oh, and we also found out Wolverine might be their real father, so just let that sink in.