Subtle Details You Missed in the ‘Harry Potter’ Movies 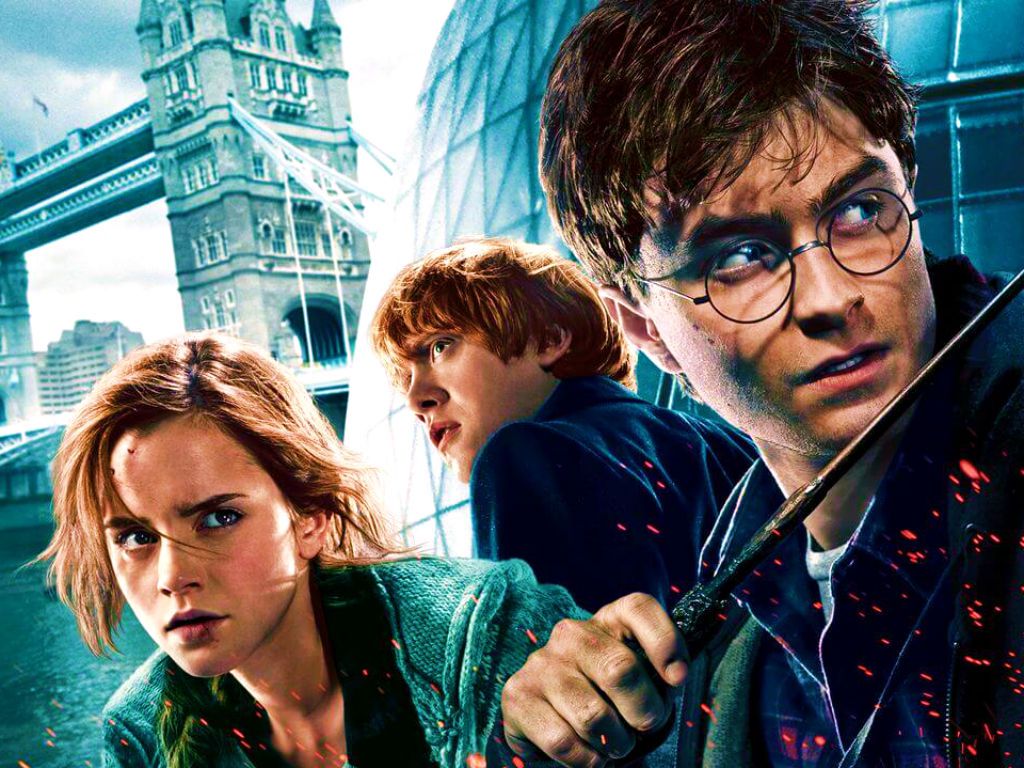 Over the course of 10-years, JK Rowling's stories about a wizard and a couple of his friends made their way into the hearts of people all over the world. It was no easy feat to adapt each book into its respective movie. Plenty of things evolved along the way, some a little less obvious than others, but all of them worth knowing for a true Potterhead.

The characters aren't the only things that changed from Harry Potter film to film. From the initial film's bright and cloudless sky behind the Warner Bros. emblem to the last film's almost opaque sky full of clouds behind an emblem matching in value, the intro to each film became increasingly ominous throughout the years.

Harry Potter really dialed it in with the symbolism in the hair. We could also really be reading into it, though. Either way, our favorite Slytherin went through his fair share of awkward hairstyles. Tom Felton rocked the slick-back blonde hair for the first movie, letting us all know how tightly wound-up Draco Malfoy truly was.

A decade's worth of filming and Harry Potter's, Tom Felton grew up. His hair transformation far surpasses anybody else's. From his initial battle with gel and a comb, his hair loses its taut structure as the films progress and Malfoy develops a sense of self. We're also pretty sure Tom Felton gave up his blonde locks for some brunette ones when filming ending.

The first two Harry Potter noted an ease to get to Hagrid's home. All the children had to do was cross a huge, flat field of grass and voíla, you were there. But, in Prisoner of Azkanban, the layout of the field drastically shifted. The slant and distance between Hogwarts and Hagrid's home seems to represent Hagrid's position at Hogwarts as its Groundskeeper.

A year younger than Daniel Radcliff when filming for Harry Potter started, Emma Watson was wide-eyed and frizzy haired. Throughout the series, her hair progressively tames itself down. The stress of being a Muggle in a new school might have had some kind of correlation with her frizzy hair.

Ten years later, the last Harry Potter film, we see Emma Watson with reasonably tamed, and maybe straightened, hair. She's undoubtedly found her place amongst friends and at Hogwarts. Watson claims to have not been able to cut her hair during filming, so when the series finally ended— she chopped all of it off. Go, Emma.

Something Different About Hogwarts

After the first film in the Harry Potter series, a few adjustments were made to the Hogwarts School of Witchcraft and Wizardry. Towers were built, clocks were reconstructed, courtyards were created or enlarged, and the overall style of the architecture shifted around. For the most part, they're all minor changes made for the sake of scenes and something you probably didn't notice because Hogwarts is just as magnificent in the first movie as it is in the last.

During initial filming of Harry Potter, Rupert Grint's hair did the same puffy thing Daniel Radcliff's did. It could have very well been planned and meant to imply the innocence and weightlessness the initially possessed when they arrived at Hogwarts. His puffy hair also starts out vividly red, exceptionally red.

A decade later and a bit muted, Rupert Grint in the later Harry Potter films seems really stressed out, which he probably is. He has the kind of bags under his eyes that comes with fighting the most dangerous wizard in the world and the vivid red in his hair has weakened into a subtle ginger that no longer splits in that awkward middle-part anymore.

The Harry Potter film series had 4 directors over its course of shooting: Chris Columbus, Alfonso Cuarón, Mike Newell, and David Yates. The different directors caused a change and evolution in the direction of the films from child-like and innocent to dark and complicated, indicating the growing intensity of the material covered in each respective film.

Matthew Lewis played the most innocent Harry Potter character in the series, Neville Longbottom. He was 11-years-old when filming started, so his chubby cheeks and bowl hair-cut were never meant to last forever. But something about his rosy-cheeks and slight gap in his teeth makes the entire naive, yet courageous schtick work.

Probably Harry Potter's most astounding character transformation, both in appearance and character development, Matthew Lewis gracefully transformed from a cherub into a chiseled adult. As the films progressed, his character's personality, and appearance, and actions reflected his growing confidence and courage in House Gryffindor.

Similar to the way the Fresh Prince of Bel-Air transitioned Vivian's character, the same was done to Dumbledore in Harry Potter, though the transition was far smoother. With the passing of Richard Harris, the original Dumbledore, the torch had to be passed on. Who other to take on this torch than Michael Gambon?

Michael Gambon took over the role of Albus Dumbledore in Harry Potter: Prisoners of Azkaban and throughout the remaining films in the series. Ian McKellen, Gandalf in Lord of the Rings, could have easily resembled Dumbldore. But he already had a schtick with the Lord of the Rings and nobody wanted anybody getting the two series intertwined with similar old wizards with long, white beards.

Over the course of the Harry Potter films, changes were made to the Gryffindor dorm room— namely, Harry's. The change was subtle, because although props were added and removed to represent what the characters might like at that moment, the beds remained the same. Same room, same-sized beds, different props, growing bodies filling them.

In the first Harry Potter, the potions classroom was merely a standard room with benches and a desk for Snape to teach at (quip from). Throughout the progression of the films, the potions room subtly and sometimes not so subtly continued to expand. There is one point during the expansion where the potions room even takes on a dungeon setting, dingy and crowded with vials.

When Professor Umbridge is introduced in the fifth Harry Potter film, Harry Potter and the Order of the Phoenix, she is wearing a light-pink wardrobe and has recently taken over as the Defense of the Dark Arts professor. Throughout the film itself, and later in Deathly Hallows, as she gains more power and becomes more malevolent, the pink shade of her wardrobe also becomes more intense.

Up until the last Harry Potter film, Vincent Crabbe was played by Jamie Waylett. Ten-years-old when filming started, Crabbe became a third of the Slytherin trio that terrorized Harry. He was a henchman of sorts.

After pleading guilty to growing cannabis in 2009, Warner Bros. replaced Jamie Waylett with a new "Crabbe." In Harry Potter: Deathly Hallows Part II, Blaise Zabini, Louis Cordice, plays the part of Malfoy's other henchman. And is only really vital to one scene, where the Slytherin trio and the Gryffindor trio finally go at it, almost destroying the Room of Requirement.

Under Chris Columbus’ direction, the costume direction for Harry Potter was simple. It clung tight to the descriptions of the books, with clean shirts and knotted ties and cloaks. Each character always looked carefully put together because that was the kind of thing Hogwarts required— tucked-in shirts.

As an 11-year-old and the lead in the Harry Potter series, Daniel Radcliff was a cheeky kid. His head might have been a little too big for his body, or maybe that was the illusion of all of Dudley's hand-me-downs. His hair seemed to have a lot of volume, too, which could also explain it.

Newly legal at 21, the Harry Potter star, Daniel Radcliffe, might have grown-up a little bit. Aside from the defined jawline and the flatter hair, possibly meant to imply the weight he's under. Then again, he could just be using a different hair product. Those glasses never changed, though.

After the first two movies, the directors and the direction of the costumes in Harry Potter changed. There was a less intense control over the clothes and the way the characters had to wear them. Sometimes normal clothes were in order. And when uniforms were worn, characters were at liberty to wear them however they wanted.

Eventually, with the progression of technology and software, the crew of the Harry Potter film series moved onto digital models. They kept the same giant miniature model concept, but opted for using screens rather than their bare-hands to create and film exterior shots of Hogwarts. We can thank the Double Negative studio for that innovation.