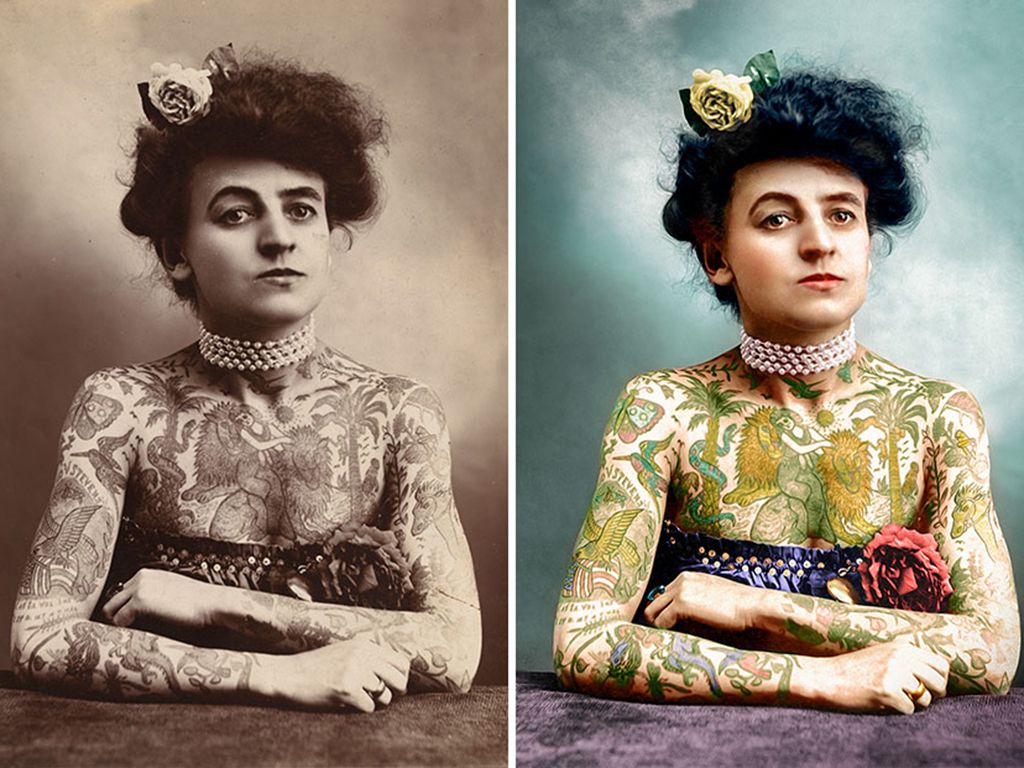 A good photographer can make any photograph stand out whether they're shot in color or black and white. But back in the 1960s, a color photograph was a bit unusual. So, when most people see a black and white photo, they automatically think there’s something historical about it.

And in some cases, they are! But the photos on this list depict a precious moment in time that truly comes alive thanks to the power of colorization. These turn-of-the-century photographs depict a time before modern technology and many modern conveniences, but they look as vibrant as if they were taken yesterday.

Flipping burgers for minimum wage is by no means a modern construct. This photo shows a young Black man flipping burgers at a fast food joint in 1938 while his supervisor watches on the far left.

This photo of Mark Twain was taken in 1900, but Twain wasn’t his real name. He was actually born Samuel Clemens, but used Twain as a pseudonym. He was best known as a travel writer and as the man who wrote "The Adventures of Huckleberry Finn.”

Ice block delivery is a man’s job? Says who? These gals are putting their muscles to it and moving large blocks of ice from what looks like a carriage, proving that women are just as valuable to the work force as men in a time when that wasn't common knowledge.

This photo of a country store in Gordonton, North Carolina, was taken in July of 1939. The colorization of this black and white picture makes the signs on the outside of the store look far more vibrant, as are the folks sitting on the front porch waiting for a customer to drive in.

Helen Keller, who was both blind, deaf, and mute, used her hands to get to know comedic actor Charlie Chaplin’s face in 1918. Keller was also considered an advocate for deaf and blind people and she wrote several books in her lifetime.

British soldiers were snapped returning from the war in 1939. But regardless of whether the photo is in black and white or in color, the joy these men feel at being home is evident in their eyes and their pearly white smiles.

This photo of Lee Harvey Oswald was taken before 1963 and it shows the man long before being taken in for questioning before his trial. Oswald became infamous for being the guy who shot President John F. Kennedy.

The Hindenburg airship went up in flames when it touched the mooring mast in Lakehurst, New Jersey. This led to the deaths of 36 crewmembers and passengers, including a ground crewmember on May 6, 1937. Ironically, 62 of the 97 people aboard did survive.

This colored photo of Times Square in New York City, shows what this iconic tourist spot was like back in 1947. While it certainly doesn’t have as many of the glittering lights that it has today, it was already showing great potential.

Anyone who thinks that Madison Square Park in New York City is posh today will realize that it had been like that since around the 1900s. This colorized photo shows ladies walking on the sidewalk on the outskirts of the park, while some gentlemen wait in horse drawn carriages to taxi passengers around.

No. This isn’t actor Scott Eastwood. It’s actually his father, Clint Eastwood. You know, the guy who did all those westerns back in the day? That might explain why he’s looking all handsome while checking his gun to see if there are any bullets in it.

They say that the more things change, the more they stay the same. Well, that certainly seems to be true in this photo of the Brooklyn Bridge in New York that was taken in 1904. While the massive skyline we’ve come to expect was still in its infancy, the bridge was a symbol of the great things that were still to come.

This photograph was taken during the Dust Bowl, a time when horrible dust storms and drought laid waste to the American prairie’s agriculture. The colorized photo shows a farmer from Oklahoma and his family sitting on a carriage looking on with concern over their plight.

Gas stations have come a long way since 1924. This photo was taken in the 1920s and shows a group of guys waiting as a man prepares to fill the gas tank. And in those days, gas stations were called filling stations.

Louis Armstrong was snapped practicing with his musical instrument backstage. Armstrong was a trumpeter and a vocalist among other things. Some of his genres included Dixieland and jazz. He was also known as Satch and Satchmo.

The Battle of Antietam was a battle fought on September 17, 1862 during the American Civil War. It was also known as the Battle of Sharpsburg. And this photo shows President Lincoln, Major General McClernand and Allan Pinkerton at base camp.

Once again, Louis Armstrong graces our presence on this list. And this time, he’s showing his romantic side as he plays the trumpet for his beloved wife, Lucille, in front of the pyramids and Sphinx in Cairo, Egypt in 1961.

This car crash was photographed in Washington, D.C. circa 1921. The passenger seems shocked, but unharmed. Unfortunately, the same can’t be said for the front bumper of this classic vehicle. There also seems to be some side damage, too.

What does a lumber worker do when he’s married and unemployed? Apparently, he takes his shirt off and smokes a pipe. He doesn’t seem very upset, unlike his wife in the background who’s wondering how they’re going to make ends meet.

Everyone knows Albert Einstein was one of the greatest theoretical scientists in history, but most people don’t realize that he had some pretty nice legs. This photo was taken of Einstein wearing shorts while crossing his legs in Long Island beach.

While the exact date of this photo is unknown, it did happen during WWII. And these soldiers are eagerly celebrating Easter by making an explosive Easter Egg basket for none other than the Nazi leader, Adolph Hitler.

It might look like this soldier is in the middle of a terrible war, but Sergeant George Camblair is actually in Fort Belvoir, Virginia, practicing with his gas mask on in case the real thing happens.

This photo was taken on April 16, 1912 and depicts a boy named Ned Parfett selling the evening newspaper which headlines the horrible sinking of the Titanic that led to the loss of several lives.

In 1923, two of the greatest minds in American history met. Thomas Edison, who was responsible for such inventions as the phonograph, the modern motion picture camera and even the electric lightbulb met Henry Ford, the man who founded the Ford Motor Company and conceptualized the modern assembly line. It might seem strange that the two men lived during the same time in American history, but it’s true. Edison was born in the year 1847 and lived until 1931 and Henry Ford was born in 1863 and passed away in 1947.

Charlie Chaplin was one of the greatest actors of the 1920s and he helped transform motion pictures into the art form they are known as today. Not only was Chaplin a skilled comedian in front of the camera, but he also helped score his own films on the violin during post-production. This photo was taken during the filming of the 1918 film “A Dog’s Life” and the doggy star in the shot was named Mut, although in the film he plays a dog named Scraps. The picture was only 33 minutes long and it also features an appearance from Chaplin’s brother Sydney.