The Worst CGI Movie Moments Ever 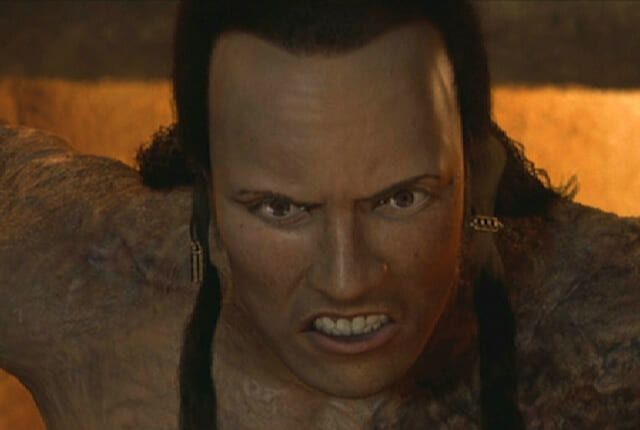 In this digital age of movie making, CGI can make or break a film. Some, like 1993's “Jurassic Park,” practically seamless. And that movie still holds up today, nearly 25 years later. But others, like 2001’s “The Mummy Returns,” are, well, a little less seamless. And that's despite coming along years later and with a much bigger budget. So this is our ode to the worst CGI movie moments.  These scene could have been great. So what happened? Someone must have overlooked them during budget allocation. Or maybe the visual effects guy was on a long break while the scenes were rendering.

Anyone who’s made it far enough into the “Twilight" series to see Renesmee, the creepy CGI baby born of brooding sparkles, probably deserves a goddam medal for not punching their TV screen sooner. But did you know that baby could have been a million times worse? As in, animatronic Chucky doll worse.

Not that “Lost in Space” was an award-worthy film to begin with, but it did have a budget of $80 million, and one would assume that at least a portion of that would have gone to making a believable-ish space primate. Alas, what we were left with was, well, not that.

It’s like they were trying to make Scooby look like a plastic version of the classic cartoon. But no amount of suspension of disbelief could ever make us buy into this terribly rendered great dane, regardless of how many crimes he’s able to solve with those other meddling kids.

We love us a good shark attack, but come on. Not only is the CGI shark in “Deep Blue Sea” of the caliber we’d expect from a Syfy movie, but they couldn’t even do justice to Samuel L. Jackson’s wetsuit-clad corporate exec. The man deserved better!

The Snakes (“Snakes on a Plane”)

Speaking of Samuel L. Jackson, not even his infamous one-liner could make up for the poor quality snake effects that overtook the rest of the awesomely bad "Snakes on a Plane." That bathroom scene? Eesh.

While the “Nightmare on Elm Street” and “Friday the 13th” franchises aren’t exactly known for their CGI prowess, this “Alice in Wonderland” inspired horror caterpillar can’t even live up to the cheesy practical effects of its 1980s predecessors. No amount of second-hand pot smoke can make it work.

Car Crash (“Along Came a Spider”)

If you thought the car maneuvers in the “Fast and Furious” franchise were unbelievable, then you have not yet experienced the physics wonder that is the “Along Came a Spider” car crash. How many times can a single car flip over before flying off a cliff? We may never really know.

“The Matrix” was a technological wonder when it hit theaters in 1999. By the time of its sequels, however, the overall tone had shifted to something a little less cool and a little more obnoxious. This scene is basically like letting The Wachowskis loose in an effects bay without proper supervision.

Dark Seekers (“I Am Legend”)

You know what would have been a more effective (and cheaper) alternative to these awful looking CGI zombies? Regular extras in bald caps and minimal makeup. Hollywood isn’t exactly starving for actual people who want to be in movies, you know.

This one may be kind of a cheat, because “The Langoliers” is an actual made-for-TV movie, so expectations can’t be very high. But if you need a good laugh, just remember that someone thought these CGI monsters were frightening enough to do justice to a Stephen King story.

The Troll (“Harry Potter and the Sorcerer’s Stone”)

The first “Harry Potter” film isn’t without its effects faults, but the troll in the bathroom is the one we just cannot forgive. Honestly, we expect more from a $125 million movie comprised of a cast of mostly unknowns. Where did the money go to? Certainly not believability.

For a sequel to one of the most successful horror films out there, we never thought we’d laugh as much as we did. But watching a bunch of ultra-shiny cartoonish deer go batshit crazy on a 1990 VW Jetta does more than a little something to ruin the terror factor.

While it may starts out as halfway believable CGI sequence, the longer this one goes on, the worse it gets. As more of the island crew are trampled, the more painfully obvious the green screen work becomes, making the entire scene as laughable as the film’s performances.

Does anyone remember that late ‘90s show “Animorphs”? Its animal morphing technique was clearly ripped off from “Mortal Kombat: Annihilation.”

What the hell, Marvel? While we could tear apart nearly every aspect of “X-Men Origins: Wolverine” (we will never, ever forgive the atrocity that was Wade Wilson), it’s Wolverine’s claws that are the real kicker. How can something look a thousand times worse than it did nearly a decade prior?

The Rock may be able to save any franchise he’s cast in, but The Rock will never save the Scorpion King CGI abomination of “The Mummy Returns.”

"You know what would make for a much better on-screen Hulk? Double his height, chop his shorts in half, and make his appearance both too flat and too shiny." – Ang Lee, probably.

George Lucas did his fans dirty when he re-released the original “Star Wars” trilogy into theaters in the late ‘90s. It wasn’t enough to just give the films a digital remastering. Oh, no. The master tinkerer decided we needed more CGI than the world had ever known, including this inexcusable Jabba.