The Absolute Worst Netflix Original Shows You Should Just Skip 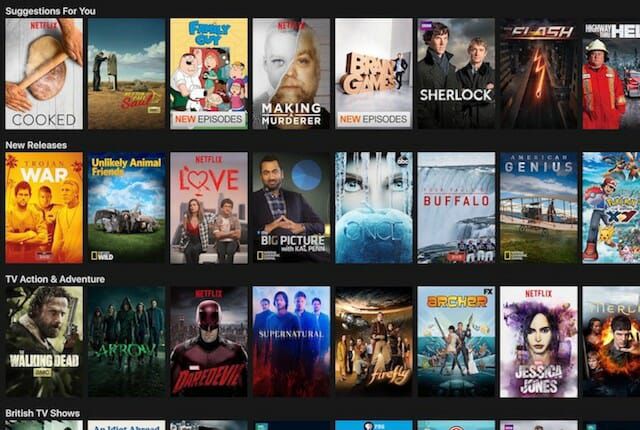 OK, try this: Think about Netflix original programming. Chances are good you had no trouble coming up with a list of some of the most critically acclaimed shows going right now. Like Stranger Things. And Mindhunter. And most of the Marvel Netflix series. (Sorry, Iron Fist.) But Netflix isn’t all certified fresh scores and Emmys. Because the streaming service has had its fair share of misses in the television department. And some of them you’ve probably never even heard of. But we love to hate on things. So that's why we’re more than happy to take the time to run down the worst Netflix original shows the network has created.

Forget the fact that each episode is too short to successfully cram every ounce of information Cooked tries to cram into it. Maybe it’s that the documentary series kind of tries to make us all feel bad about our eating choices. So I’m going to make a run to In-n-Out instead of actively seeking out whatever free-range, grass-fed, ethically raised, hand pressed patties Whole Foods is currently selling. Sue me.

Chelsea Handler isn’t going to be everyone’s cup of tea. That’s fine; some late night personalities are more palatable than others. But Handler is a lot. And an unfiltered, unscripted Handler is just too much… especially when there are others who have come before her and done it better.

Friends From College is not without its funny moments. Its biggest drawback has nothing to do with its cast (which is stellar) or dialogue (which is witty), but rather with its characters. Because none of them are actually likable. And a show based around an affair between two people who don’t even seem to like each other all that much just isn’t worth coming back to.

Sometimes YouTube content should just stay on YouTube. That’s the lesson learned with Haters Back Off!, which attempts (unsuccessfully) to translate short form comedy into a long form series. Two minutes of Miranda Sings’ brand of obnoxious “talent” is doable. 30 minutes is definitely not.

Flaked is one of those shows that was doomed to fail from its onset. With Arrested Development’s creator Mitch Hurwitz and star Will Arnett as the creative force behind it, expectations were naturally high. Sadly, Flaked ends up being another run of the mill, guys acting like idiots comedy, and the industry is already saturated enough with those.

It’s hard to imagine what kind of person would look at Rob Schneider and think him deserving of his own parody series. But someone at Netflix sure did, and we got stuck with Real Rob, a show about Rob Schneider’s actual life. Only not really, because comedy. We think is how that was supposed to go.

The Kardashians made a name for themselves by becoming famous for doing literally nothing noteworthy (sex tape aside). Chasing Cameron sort of tries to do the same thing (minus the sex tape), in that it’s a show about a guy who we’re supposed to think is famous, even though he really isn’t. Maybe if there had been a sex tape, we’d actually want to watch the show.

So to recap: Richie Rich is a pretty annoying kid on his own, but then he also has a trillion dollars. Because there’s nothing more endearing than sitting through a half hour of an obnoxious child’s daily adventures, when that obnoxious child is also spoiled AF. And we’re somehow surprised this show failed?

Or how childhood nostalgia can only take a show so far. Fuller House is a near identical copy of its predecessor, wrapped up in modern white feminism. There’s nothing fun or funny about the series, and the moments in which it tries to be progressive really just wind up falling flat.

The Ranch isn’t bad, per se. But it definitely isn’t something you’d expect to see coming from Netflix. It feels more like a typical CBS weeknight comedy than anything else: predictable, easy, safe. It certainly isn’t the crown jewel of the streaming service; it's a little closer to being its canned laugh track.

Suffering from a serious lack of substance in favor of pure style, Marco Polo tries really hard to be everything that it isn’t: the next Game of Thrones. Unfortunately for the show, everything about it that isn’t its aesthetic falls short. The acting is okay, and the writing is watchable, but neither of those traits make for a long lasting period drama.

It’s not like Netflix can’t do sci-fi horror. Netflix has gifted us with Stranger Things, after all. But the throw everything at the wall and see what sticks approach that Hemlock Grove takes isn’t about to win anyone over. Especially when its idea of shock value is the as-yet-unaware vampire protagonist having an affinity for a woman’s menstrual cycle.

What could be better than the dad from My Father the Hero starring in a political drama that looks and feels like every American version of that type of show? Cyrano De Bergerac is made for this kind of gritty series. His time protecting the Man in the Iron Mask has led him to this very moment.

Gilmore Girls: A Year in the Life

A Year in the Life was successful for Netflix in that it successfully managed to completely split Gilmore Girls fans into two separate camps. The first loved the miniseries in spite of everything wrong with it, while the second thought it was an affront to everything Rory Gilmore had worked to build. We’re going to take the middle ground here: the story isn’t actually bad (or unbelievable — sorry ‘bout it). But the pacing is terrible, and that musical number? If we could only get those precious 20 minutes of our lives back.

The thing that people seem to forget about Girlboss isn’t that it’s based on an actual person (Nasty Gal Founder Sophia Amoruso); it’s that that actual person is notorious for being kind of terrible. When you base a show on a terrible person, it can go one of two ways: the House of Cards way, in which viewers secretly root for the bad guy because he’s just so damn good at what he does, or the way in which viewers secretly hope for the bad guy’s total undoing, because he’s just that unlikeable. Guess which category Girlboss falls into.

Gypsy tries really hard to be something… anything. It’s unfortunate that in spite of its cast, which is great, it winds up being kind of… well, nothing. At least nothing significant. For a show that promotes itself as a psychological thriller, there’s nothing psychological or thrilling about it. In fact, there isn’t really anything particularly memorable about it in general.

Ooh look, another post-apocalyptic type series for our television viewing consumption. Only this time, we also get a heartwarming family tale about a pregnant teen just struggling to get by. And it isn’t even bingeable, because Netflix decided to try its hand at that whole, once weekly installment thing, which really just makes it easier for us not to tune in.

The Wachowskis are known for their high concept sci-fi projects, but if you look at their work over the last 20 years objectively, they’ve kind of been riding out The Matrix wave. We keep giving them chance after chance to prove themselves post-Keanu, and they keep almost making good stuff. Sense8 is that.

Netflix was doing so well with its Marvel properties. Daredevil is arguably one of the best Marvel adaptations we’ve ever seen, and Jessica Jones and Luke Cage both brought serious style to otherwise B-list superheroes. Then we got Iron Fist, which stars a guy best known for playing the Knight of Flowers, who can sort of act but can’t fight worth a damn, and a storyline that should have just remained in the pages of a ‘70s comic book.

While we love ourselves some Kathy Bates, not even her star power could save Disjointed from its terrible writing. Blame co-creator Chuck Lorre, the man responsible for Two and a Half Men, a show that somehow managed to remain on the air for 12 seasons, in spite of its complete lack of actual comedy. We’re guessing Disjointed will not fare as well, though.