Once in a Lifetime Foods Caught on Camera

Camila Villafane
Once in a Lifetime Foods Caught on Camera August 25, 2020Leave a comment 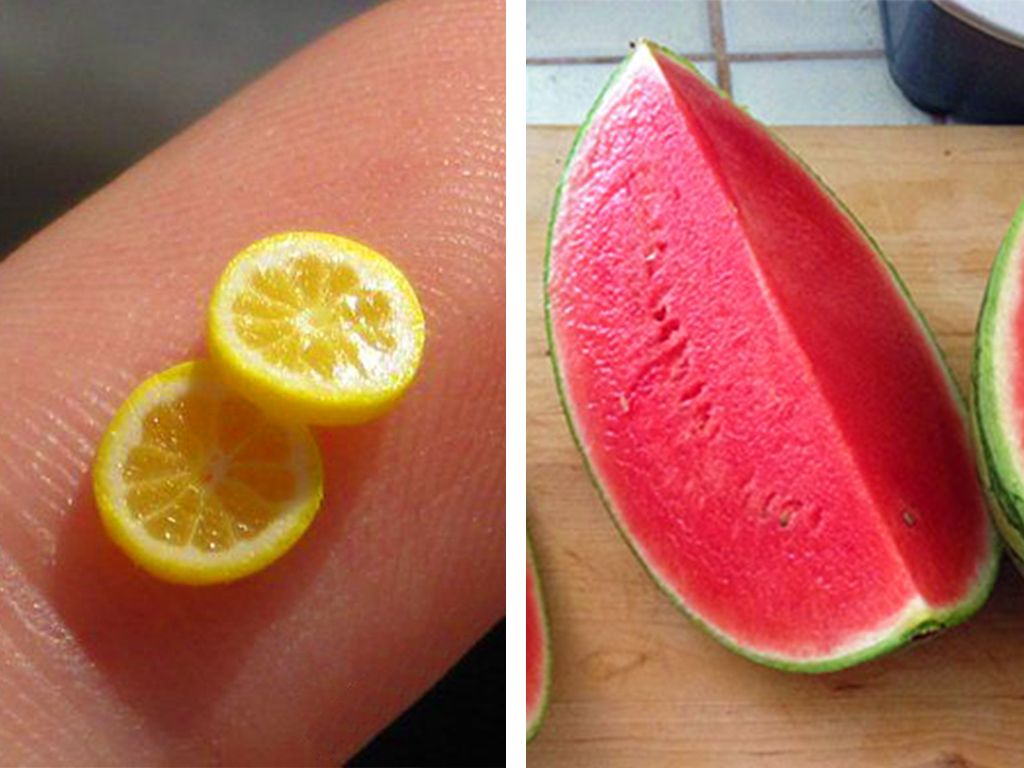 They say money can’t buy happiness, but food definitely can. Who needs to win the lottery when you can win the food lottery? But what is the food lottery, you ask? It’s when the Gods smile down on us and we get large fries when we only ordered small, for example.

But it doesn’t always work the way you expect. Sometimes you might cut open a piece of fruit and you might be pleasantly surprised by what you find, like these lucky few were...

The Strawberry Is So Tiny

How is this possible? Is this a giant’s hand? No. The strawberry is actually that tiny. It’s insanely cute. Obviously, they can’t enjoy this micro treat for breakfast or make a smoothie with it. But it’s so darn small and cute that it’s worth a selfie.

Some Strawberries Are Total Mutants

This might look like a strawberry that’s been stepped on, but it’s actually multiple strawberries that became fused together. So basically, this is the fruity version of Siamese octuplets. But would you eat something so odd looking or would you toss it?

This Orange Had Black Decay in Its Center

It’s not surprising to run into a fruit that’s spoiled every now and then. But when this person cut their orange in half, they found this odd black decay growing out from the center. We’re not experts but this definitely doesn’t look right.

There’s a Mini Orange Within the Orange

Other than its delicious taste, oranges leave very little to the imagination. But this particular orange offered a puzzling surprise at its core. When this person split his orange open, he found an adorable mini orange lurking in the center.

This Watermelon Had No Rind

Watermelons are so juicy and refreshing especially during those hot summer months. But there’s nothing more annoying than having to pick the seeds out, which is not nearly as gross as spitting them out while they’re in your mouth. But this watermelon had practically no rinds. And we have a winner!!!

This Egg Had an Uneggspected Surprise

When people crack an egg on the frying pan, they usually expect to find the yolk floating in the middle of all the white. But this person was shocked to discover that their egg was missing its yolk. Now that’s an uneggspected surprise.

The Egg Had Another Egg Inside

Some eggs have no yolk inside them and others have more than meets the eye. When this person cracked their egg, something surprising popped out. There was a tiny egg inside the egg and it’s so cute, but no word on whether they actually cracked it and ate it.

The Avocado Pit Was Too Big

Most avocados come with small pits, which is what this person was banking on so they could have one for dinner. But when they cut it in half, they discovered that it had an enormous pit and not nearly enough avocado to satiate their hunger.

This Ice Cone is Missing Something

The reason they’re called ice cream cones is because they are basically ice cream in a cone. But when this person unwrapped their purchase, they discovered that there was a very important part of their ice cream missing—the cone itself.

It must be a Monday because this person ordered a beer at the bar and what they got was a tall glass of disappointment. As you can tell from the photo, there’s only a tiny amount of beer at the bottom while the rest of the glass is full of foam.

There Was a Bonus Pop Tart

Pop Tarts come in twos. At least, that’s the general rule. But on this particular day, this guy opened up the wrapping and found a bonus Pop Tart, which is truly the best food lottery jackpot ever.

This Potato Chip is Enormous

Check out this potato chip. It’s so big that it’s about the size of a 5-dollar bill. Now imagine a bag full of these giant chips. Your cholesterol might skyrocket but it might be worth it to enjoy those super-sized potato chips.

These Eggs Have Double Yolks

This person cracked three eggs and they got really lucky because each of these eggs had two yolks in them. What are the odds? Now this person should seriously consider playing the lottery. If they have as much luck with numbers as they do with eggs, they might actually win.

They Bought a Double Banana

The person who bought this banana was seeing double after they peeled it. Looks like these two bananas were twinning or in this case Siamese twinning. Either way, it looks weird but also quite delicious.

Imagine digging into a bag of Doritos and finding this enormous cheese dust ball inside? Welp! That’s exactly what this person found. Maybe he can crush it up, put it in a salt shaker and just sprinkle it back into the bag for a little extra cheese flavor.

This Red Pepper Had a Surprise Inside

This red pepper had an unusual surprise growing inside of it. There was a green bell pepper underneath its skin. But just in case you didn’t know, red peppers are just older green peppers. But what are the odds of finding one inside the other?

This Bread is a Little Too Airy

Talk about getting ripped off! When this person cut their bread in half, they noticed that it was mostly hollow. This is what people who open up bags of chips experience all the time. But hey, maybe this person can do something cool with that space like turn this into a bread bowl for soup.

This Can of Beans Was Missing Something

This person opened a can of beans, but when they lifted the lid up, all they found was water. So, it looks like someone literally spilled the beans at the factory and forgot to tell someone.

Here’s Some Extra Bacon to Go

Want to know when’s the best time to get extra bacon at 5 Guys? Closing time. That’s when this guy went and got some extra bacon because they were going to throw it out. So instead they offered it to him and he was not in the business of saying no.

Someone’s Getting an Extra Taco

It was Taco Tuesday at someone’s house and the only thing that could possibly make this day better was this discovery. Instead of 10 taco shells, this box came with 11, which means that someone undoubtedly had to fight for the extra taco.

This Hot Pocket Came With a Sample

What are the odds of buying a hot pocket that comes with something a bit extra? Consider it a sample size that you can heat up and take a bite out of, and if you like it you can microwave the full Hot Pocket.

There Was a Gigantic Flake In His Cereal

Talk about getting some extra fiber in your breakfast. That flake is huge! Then again, it could be a piece of cardboard from the box that was accidentally mixed in with the bowl. Either way, the person eating this is going to have an interesting experience.

He Got an Extra Patty in His McDouble

He ordered a McDouble at McDonald’s but as he took a bite into it, he realized that he didn’t get what he ordered. But he wasn’t complaining either because his McDouble was more like a McTriple when he noticed his burger had an extra patty.

Lord of the Onion Rings

This guy ordered some onion rings, but what he found was more like an onion donut. Maybe it was his destiny to find that one onion ring that could rule them all. Guess that would make him The Lord of the Onion Rings.

It's not every day that you see a kiwi that is the shape of a banana! This person was surprised to see this unique fruit in her garden, and luckily it tasted delicious!

When you grow your own fruit, you get to see the misshapen fruit that never makes it to the grocery store. And some fruit never grows big enough to get much use out of, like this teeny tiny lemon that's no bigger than the tip of your finger!