Sarah Knieser
18-Year-Old Dog Returns to the Shelter He Was Adopted From And Immediately Starts Acting Differently November 13, 2019Leave a comment 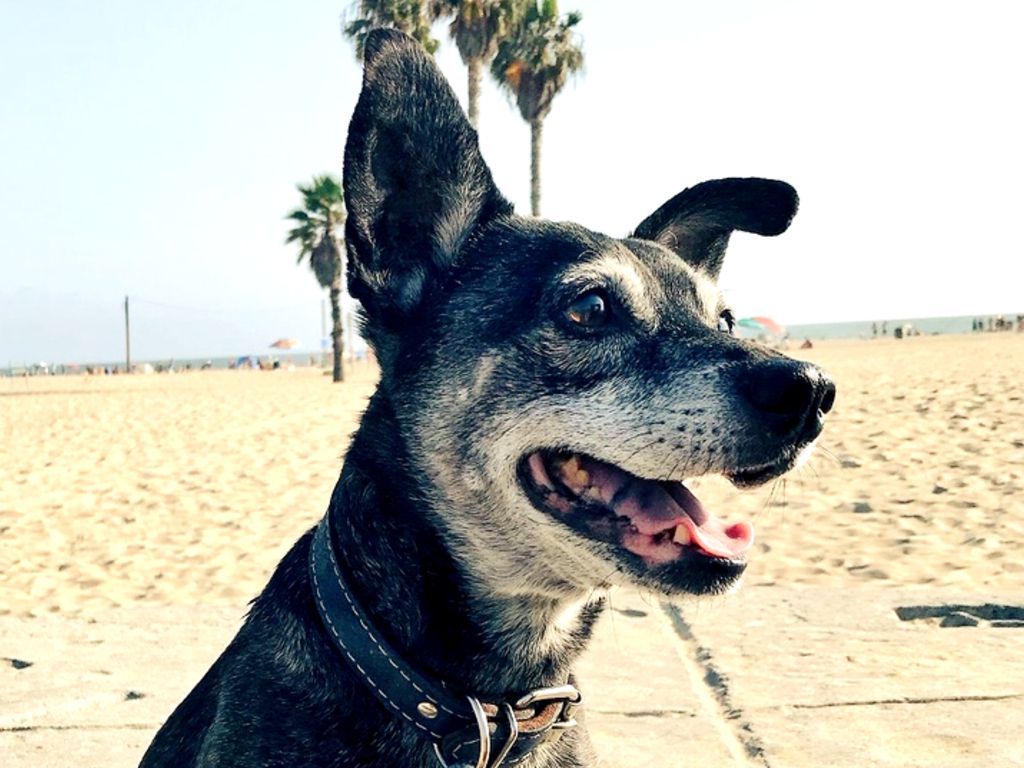 Alex was seated at one end of the room with Tonic barking at the other. Suddenly, the dog stopped his barking, as if exhausted with having to defend himself. So, Alex asked Tonic, “Is that it?” knowing that this was Tonic’s method of protecting himself. Soon, Alex would know that Tonic was the dog for him…

After their 18 years together, Alex returned to the shelter where he first met his loyal dog with a plan in mind. This visit wouldn’t have been possible without the support of a stranger and the love and loyalty of his old terrier.

A Small, Scared Dog in Need of a Home

Tonic, like many dogs was brought to an animal shelter shortly after he was born. A small, black terrier, he was separated from his mother and siblings for unknown reasons. But, he could never imagine what his future would hold…

He Was Traumatized From His Past

While he was in the shelter, Tonic was afraid. As a small dog who was new to the world, the shelter had many scary sights and sounds that the young dog wasn’t prepared for. He spent his first experience in the shelter afraid for his life, unlikely that he would ever find a home.

He Barked And Nipped At Hopeful Owners

A few months into his life, Tonic was adopted. This is the best hope for any shelter dog, but sadly, this wouldn’t be the end of his adoption journey. After a few months, Tonic was brought back to the shelter by his new owner to meet his fate again because the dog didn’t get along with the owner’s young children. Would anyone adopt this cute but skittish dog?

He Was Returned To The Shelter After Being Adopted

It Seemed Unlikely He Would Be Adopted Again

Spending his first nine months of life in an animal shelter was very difficult for this dog. He was sweet with the workers at the shelter but when potential new owners came to the shelter to meet Tonic, he barked and nipped at them. Would his anger be too much for any hopeful dog owner to overlook?

A Potential Owner Visited The Shelter

One day, a potential owner for Tonic came in to the shelter to find a dog to adopt. Alex met with many dogs at the shelter and he was specifically looking for a dog with personality. Many dog owners have an idea in mind of the breed or size of dog they are looking for, but most of the time the perfect dog comes to you by complete surprise.

Tonic Barked At Him, Too

Tonic barked and barked at the top of his lungs the moment Alex passed by his cage. Alex had already visited two shelters on his search for a dog and it seemed apparent that Tonic had no interest in him. It was clear that Tonic wasn’t a friendly dog (at least, at the moment) and that he was scared of the people around him. But, what happened next surprised everyone in the room…

Tonic Let Down His Guard

The shelter owner asked Alex if he had kids or other pets. He answered, “No.” So, she knew that he could be a great potential owner for this shy, but sweet dog who so desperately needed a loving home.

Alex was seated at one end of the room with Tonic barking at the other. Suddenly, the dog stopped his barking, as if exhausted with having to defend himself. So, Alex asked Tonic, “Is that it?” knowing that this was Tonic’s method of defending and protecting himself. Soon, Alex would know that Tonic was the dog for him.

After Tonic stopped barking and heard Alex’s question, he did something surprising. He then bent his hind legs and got on all fours on the ground. Tonic then proceeded to crawl the length of the room to where Alex sat. When he reached him, Tonic crawled into his lap and laid his head on Alex’s leg, falling asleep, as he would come to do for many, many years.

A New Home For A Lonely Dog

When it was apparent that Tonic had let down his guard for someone for perhaps the first time in his life, the shelter worker who had been looking after him simply told Alex, “I guess you have a dog now!” If this shelter worker hadn’t recommended to Alex that he meet this dog after meeting many others, he and Tonic may both have very different lives today.

Happy Together For Over 18 Years

When Alex brought Tonic home, he was still a bit skittish and afraid, as was to be expected of the dog who spent most of his first nine months in a loud and chaotic shelter, never knowing if his new home would be permanent. Alex knew that his aggression came from fear and loneliness, so he was patient with his new pup.

Tonic Has Had An Incredible Life

After 18 happy years together, Tonic was still in his prime, with twice the energy of other dogs his age. Except for a few grey spots, Tonic had hardly aged in his decades with his owner. His skittish nature soon faded into a kind and gentle nature. He even enjoyed being covered with stickers on his thick fur (which were always removed gently).

The loyalty Tonic showed to Alex made him fondly look back to their meeting often, and soon, they would both have the chance to revisit that animal shelter...

A Stray Cat Entered The Home

One day, a stray cat wandered under the fence of Alex’s California home. He was hungry, yet friendly, but sadly without a tag. Alex could tell immediately that this cat was a house cat, not used to wandering the streets. So, he fed the cat and began a search for its owner, without a clue where this search would lead...

The Cat Came With a Reward

When the owner of the cat was found, Alex was offered a reward. He tried to turn it down, but the owner insisted that the person who found his beloved cat should be rewarded. Alex had only one use in mind for this money: giving it back to the community of rescued animals that brought his beloved terrier into his life. He called his local shelter, which they said was “desperately in need of beds, warm blankets and towels.”

A Return to the Shelter He Came From

When he received the reward, Alex went shopping to pick up supplies and treats to bring to the shelter where he found his dog, Tonic, all of those years ago. But, he never would have guessed Tonic’s reaction to returning to his old stomping ground.

With Supplies And Treats In Hand

The 18-year-old dog immediately knew that the shelter was not a place he wanted to return to. Tonic tugged on his leash outside the shelter, showing his owner that he wanted to stay outside. So, Alex carried the old dog into the shelter to meet his fellow dogs, knowing that Tonic wouldn’t ever have to be left in a shelter again.

Tonic Remembered The Shelter, Even After 18 Years

Although Tonic was nervous while entering the shelter, as long as he stayed by Alex’s side, he didn’t show any signs of fear. He followed his owner while he passed out supplies and treats to all of the cats, dogs and other animals in the shelter. But, he wanted to see how one area of the shelter had changed in the last two decades: the dog cages where he first met Tonic…

Back To Where They First Met

The last stop on their tour of the shelter was the dog cages where Alex first met Tonic and immediately fell in love with him. The shelter was loud with barking dogs and Tonic noticeably had fear in his eyes as the two walked through the shelter in total safety. Then, they found the exact cage the dog was in all of those years ago…

The Cage Brought Back Memories

When they found the cage in which Alex had met Tonic for the first time, he got tears in his eyes. But what was truly surprising was Tonic’s reaction. Just as he had done 18 years ago, Tonic walked his way over to his owner, still happy to be in his care. These two were truly meant to be together, that is undeniable.

The Shelter Was Grateful

The shelter workers in Burbank were happy to receive the donations that were made possible by Alex and the owner of Meow the cat. Shelters across America need these supplies to be able to take care of all of the animals that come in and out of these shelters.

Alex had this message to share, “Please don’t buy pets from stores, visit and donate to a shelter near you!”

This trip to the shelter where Alex first met his dog 18 years ago reminded them both of how lucky they were to have been brought together. Without the great work that this shelter does in taking care of stray animals, many owners would be without their trusted partners in life.

Tonic's longevity wouldn't be possible without the shelter workers who took care of him and continued to push for hopeful owners to adopt him, even after he proved himself to be a nervous dog. Alex credits a steady diet of raw, organic ground turkey as the secret to Tonic’s health. At 18 years old, he can still leap two feet off of the ground!