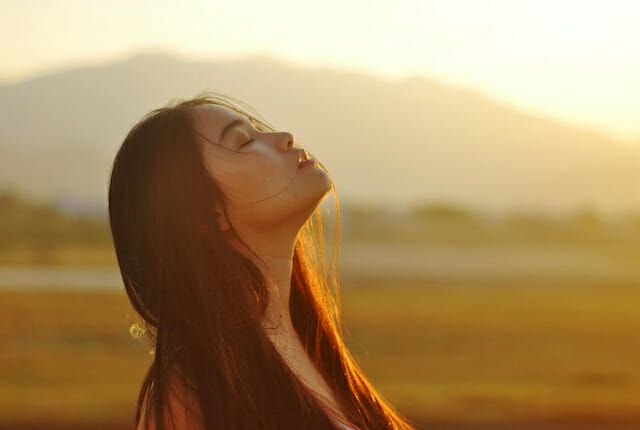 So your friends say you’re too sensitive. You pick up on other people’s moods, even when they’re trying to fake it. Animals and babies love you. If this sounds like your life, chances are you’re an empath. Empaths have an extrasensory ability to feel the emotional state of those around them. Which is cool until those emotions start taking over the day to day. So if you’re feeling like you feel a little too much, here are the most common signs of an empath you should look out for.

You feel others' feelings

It isn’t just one of those things where you can tell your best friend is down because they’re your best friend. You pick up on everyone’s feelings: friends, neighbors, the cute bartender who obviously has a thing for you but is too much of a wuss to speak up about it. And their feelings sort of become your feelings when you’re around them.

…to the point where you take on their physical symptoms

If you’re especially sensitive, you won’t be able to just feel what’s happening with those around you. You could actually pick up on their physical symptoms, too. Which means if someone you know is dealing with chronic migraines, you may want to consider taking a bit of a friend vacation.

Dealing with others’ feelings can have a seriously taxing effect on the body. When you’re constantly acting as a sort of emotional receiver, your body reacts by, well… shutting down. So if you find yourself always on the lookout for a warm bed and a soft pillow (even after you’ve gotten a full eight the night before), it may be because you’re emotionally — not physically — exhausted.

But coffee is never going to be your thing

You’re way too sensitive to drugs to take that bump some rando offered you last Friday at your buddy’s house party. You’re so sensitive to things that even caffeine can be too much for you to handle most days. Unless you’re a pro, in which case, you’re going to mainline that shit regardless of how it makes you feel half an hour later.

You have a creative bent

(i.e. you need an outlet for all that extra stuff in your soul)… Maybe you paint. Or write. Maybe you just come up with shitty poetry to paste over shitty drawings for your Instagram account. Whatever the case may be, you’re really into the art world, because how else are you going to express all of this extra emotion you’re holding onto?

You get bored really easily

If you don’t have an outlet for everything you’re feeling, those feelings tend to build up inside of you. Next thing you know, you’ve spent the entire weekend in bed under the covers thinking about everything that’s wrong with the world and the people in it. You need to be doing something always, so if you’re not working or focusing on creative tasks, you’re probably spending time outdoors in nature.

You know all of your friends’ deepest issues

Because you’re so in tune with your friends’ emotional states, you’ve kind of become the go-to dumping ground for all of their personal issues, too. It’s not like you can help it. You just sort of “get” people, so you tend to give the best advice.

But you avoid getting into serious relationships

You’re an emotional sponge, so the thought of allowing someone to get close to you — like, really close — isn’t exactly the most appealing thing on the planet. Because you’d essentially be opening yourself up to all of one person’s bullshit. 24/7. There is no escape for you.

Being in crowds is overwhelming

Being sensitive to the emotional state of one or two people is already enough to make you want to spend most of your day snuggled on the couch with your dog. Imagine having to filter through hundreds — or thousands — of others, though. The toll it takes can be overwhelming to say the least, especially if you aren’t practiced enough to block yourself off from it.

You pick up on the slightest change in your environment

You can literally hear someone opening a door on the opposite end of the house. Sometimes it’s a weird frequency that no one else around you seems to be aware of. Whatever it is, you can definitely sense it… It’s like a superpower, if superpowers were really lame and terrible.

Your threshold for pain makes you feel like a baby

You’re pretty much the last person standing in line to get a flu shot. Scraping a knee is a lot to deal with, so you can forget about ever breaking a bone. You’d be the one in the emergency room convinced you’re dying, when really it’s just a tiny fracture. But you can’t help it, because every painful sensation in your body is magnified.

You’re super in tune with your body

You know those times where you can feel yourself getting sick before the first sneeze actually happens? You do, but on a scale that’s 1000% greater than everyone else, because you can feel any time your body is even a little out of whack. And maybe that makes you look like a hypochondriac to your friends, but when you’re right, you’re right.

That one co-worker who’s always complaining about everyone else in the office? F— if you have to spend more than a few minutes with her at any given time. No one actually likes Karen, but you feel like you might legitimately have to vomit when you’re around her.

Which is why you avoid negative news

It isn’t just the Fox News Channel that makes your stomach turn. Really, any sort of news turns you off. It’s all depressing anyway, but for you it’s much, much worse. So you’ve been called a bleeding heart more than a few times in your life, but that’s only because you feel so deeply for those around you (and in some cases, those you only see on the TV screen).

Remember when Tyrion Lannister said he drinks and he knows things? That’s you, minus the drinking part (or maybe plus the drinking part, who are we to make assumptions). But your level of knowing things borders on the supernatural. Honestly, you would make for a great TV psychic, if you didn’t hate those kinds of people as much as you do.

Because you just don’t understand how people can go through life thinking only of themselves. You would never use someone for personal gain. In fact, the idea of it actually sickens you. Only one problem, though: you still attract shitty people, because you give so much of yourself.

You can read people like they’re a f—ing book. When the guy you’re seeing said he had that work meeting to go to, you knew he wasn’t going to any work meeting. You knew because your gut told you so. And because he’s a piece of trash and always has been.

Trying to process the emotions of everyone around you certainly takes a toll on your own emotional state. So if you’re feeling especially receptive, you might not be able to help vacillating between extremes. Don’t feel bad that you’re basically a teenage girl 100% of the time — it isn’t actually your fault.

And you lack any sort of filter

Just because you care about your friends, it doesn’t mean you’re going to be the one to shield them from the painful truth. You’re a tough love sort of person, because you value honesty so much. And your friends mostly appreciate you for it, except when it comes to what you said about their outfit last Tuesday.

But in spite of your flaws, you’re incredibly charismatic

People will tell you their entire life story within five minutes of knowing you. You can brighten any stranger’s day, just by being around them for a little while. It’s because you’re kind of an emotional battery, so something as simple as sharing your space makes others feel recharged. Ain’t nothing wrong with being wanted.