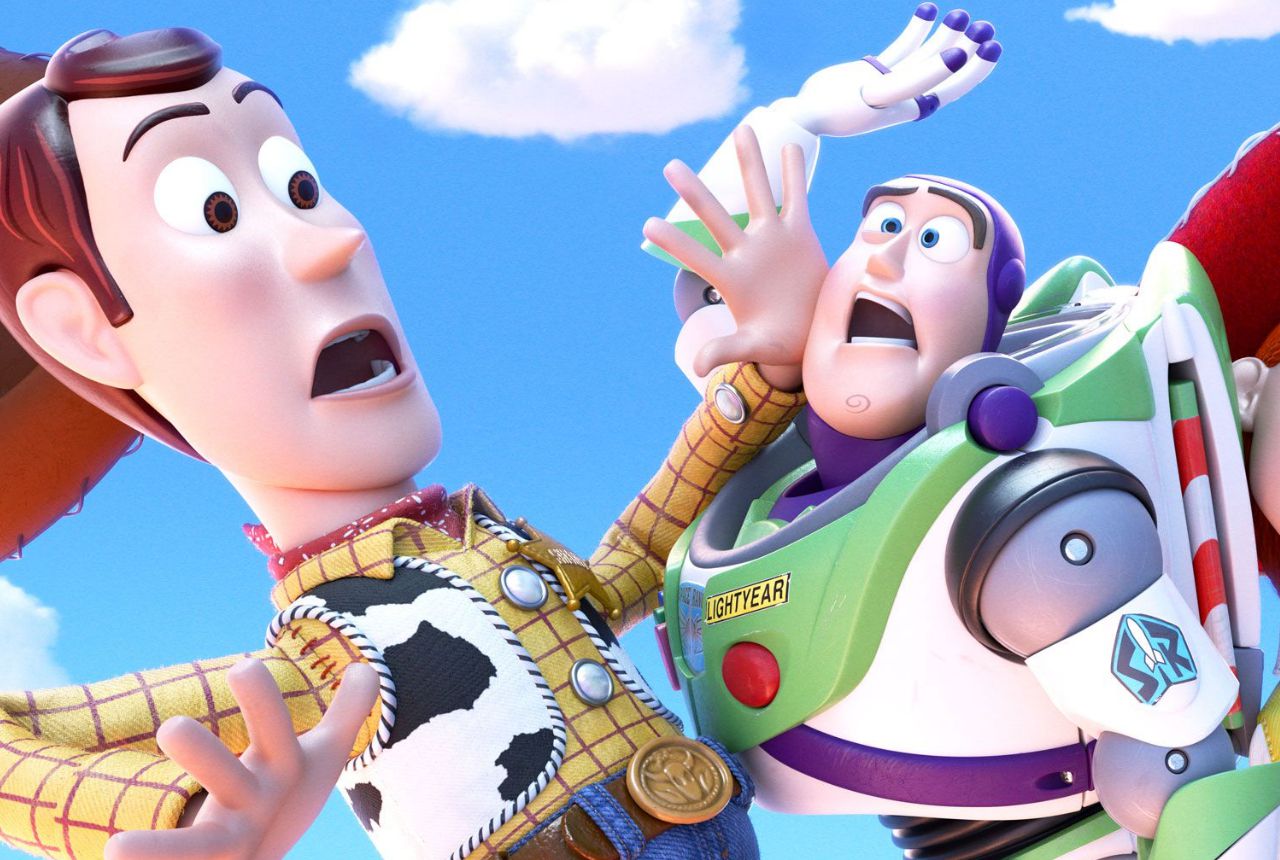 2019 is finally here, and with it comes a slew of exciting new movies. Some upcoming gems shine brighter than others, so here's our list of the most anticipated movies of 2019!

Ostensibly the final traditional "X-Men" movie, "Dark Phoenix" has been delayed amid rumors of extensive reshoots. It remains to be seen whether this film is the glorious send-off that Fox's "X-Men" cinematic universe deserves when it finally arrives on June 9.

"Sonic the Hedgehog" is an odd movie premise to start with. Fans aren't too thrilled with the blue blur's bizarre redesign, so here's hoping this film doesn't turn out to be a tremendous disappointment when it hits theaters on November 19.

A Beautiful Day in the Neighborhood

Tom Hanks playing Mister Rogers? Yes please! While "A Beautiful Day in the Neighborhood" isn't as flashy or expensive as many of 2019's most anticipated movies, it's hard to deny the appeal of this understated biopic, coming October 18.

The new "Hellboy", coming April 12, looks very much like the old movie series, albeit with "Stranger Things" star David Harbour taking over from fan favorite Ron Perlman. The lack of deviation from the established formula may prove popular with audiences who still yearn for a true follow-up to 2008's "Hellboy: The Golden Army."

"We Will Rock You," the biopic about Queen (but mostly about Freddie Mercury), was one of the biggest films of 2018. The very talented Taron Egerton looks set to make lightning strike a second time on May 17 as he takes on the role of Elton John in "Rocketman," another biopic about a phenomenally talented British musician.

While the past couple of decades have given us some truly terrible "Terminator" movies, the upcoming sixth instalment in the franchise has a lot going for it. "Terminator 6" (release date Novermber 1) is helmed by "Deadpool" director Tim Miller, and the return of Linda Hamilton as a battle-worn Sarah Connor is enough to excite even the most apathetic fans.

"Godzilla: King of Monsters" is a sequel to Gareth Edwards' 2014 take on Japan's favorite monster. The real draw here, though, is Millie Bobby Brown, venturing beyond the world of "Stranger Things" to commune with a giant radioactive lizard. This movie will debut on May 31, just in time for the summer.

After Jared Leto's turn as the Clown Prince of crime left audiences underwhelmed, Joaquin Phoenix is set to take on the role. Not much is known about the new "Joker" movie, coming October 4, but one way or another, this will probably prove to be a memorable movie.

The MCU's first movie with a female lead, "Captain Marvel" is going to be a big deal when it arrives on March 8. It probably won't draw in the crowds that "Inifinity War" managed last year, but it's still going to be a spectacle worth seeing.

The first "Fast & Furious" spin-off movie, "Hobbs & Shaw" will debut on July 26, and will pit Dwayne Johnson and Jason Statham against Idris Elba. We're about to find out whether the series can handle an instalment without Vin Diesel, and thus far, things are looking promising.

How to Train Your Dragon: The Hidden World

After the absolutely phenomenal "Into The Spider-Verse," it's going to feel a bit underwhelming to go back to a movie about just one webhead on July 5. But "Spider-Man: Far From Home" reunites the cast and creative team that made "Homecoming" a success, so seeing Tom Holland and Zendaya return for another round promises to be a lot of fun.

Almost entirely changing the cast of a movie for its sequel can be a tricky prospect. Thankfully "It: Chapter Two", due out on September 6, has some fantastic talent lined up for the follow-up to the Eighties nostalgia of the first half of the story.

Tessa Thompson and Chris Hemsworth are always wonderful together, so seeing them take over from Will Smith and Tommy Lee Jones is very intriguing. "Men in Black: International" could well revitalize an ailing sci-fi franchise, and it'll be interesting to see what new ideas Sony might have up their sleeves with this movie when it releases on June 14.

After the success of "Aquaman," it's clear that audiences can get just as excited for DC movies as for Marvel films - so long as Zack Snyder's involvement is kept to a minimum. "Shazam!," then, due April 5, could be the best DCEU film thus far, if it ends up being half as cute and lighthearted as the trailers make it seem.

"Toy Story 3" was such a perfect conclusion for the adventures of Buzz and Woody that it's hard to imagine any new film providing a suitable new direction for the series. Nevertheless, "Toy Story 4" will finally reach theaters on June 21, and Pixar has never steered its seminal franchise wrong before.

While 2019 will see the release of Tim Burton's "Dumbo," the more intriguing gritty remake of a classic Disney cartoon is "Aladdin." The success of this film (coming May 24) hinges on whether or not Will Smith can provide a suitable replacement for Robin Williams as the Genie - and whether or not the magic will live on without quite so many '90s pop culture references.

July 19 will give us a remake of "The Lion King", which will probably top "Aladdin" as the best of these remakes for the year. Directed by Jon Favreau, who previously helmed "The Jungle Book", this CGI adventure is going to get a lot of people excited - even if it almost certainly won't live up to the legacy of its predecessor.

The Lego Movie 2: The Second Part

"The Lego Movie" is one of the smartest, most heartfelt toy commercials of all time. The sequel, "The Lego Movie 2: The Second Part" looks set to work this magic again when it releases on February 8 - especially considering that directors Phil Lord and Chris Miller's work on "Spider-Man: Into the Spider-Verse" shows that they're still top dogs when it comes to animation.

"Detective Pikachu" is not the "Pokémon" movie that anybody wanted, or even asked for. A gritty, hardboiled crime story with Uncanny Valley monster designs and the voice of Ryan Reynolds all looks very jarring in the trailer - which is exactly why so many people have already fallen in love with this. We'll have to wait until May 10 to see just how good this movie proves to be.

There hasn't been a bad "John Wick" movie yet, and the prospect of a third offering is very tantalizing. It's hard to wait patiently until May 17 to see what new action setpieces will make "John Wick 3: Parabellum" stand out from the crowd.

Somehow we've ended up in a scenario where the "Star Wars" brand is greeted with apathy by moviegoers. Expect "Episode IX" to try to change this, as veteran director JJ Abrams returns for another round on December 20, attempting to fix a fractured series, and bring balance to an increasingly divided fanbase.

There's no way "Avengers: Endgame" won't be one of the biggest movie events of 2019. Following the cliffhanger ending of "Avengers: Infinity War", audiences are desperate to see how (or if) Earth's Mightiest Heroes will be able to save the day, and cap off the past ten years of Marvel movies with a fitting finale. It's going to be a long wait until this movie releases on April 26.

While "Endgame" is going to be a big deal, audiences have only been waiting for it for a year. "Frozen 2" has been in the pipeline since 2012, and as the original adventure of Elsa and Anna is still a perrennial favorite among children of a certain age, their return on November 22 will be explosive. So if you're tired of "Frozen" fever, you'll just have to let it go.

Eoin Colfer's high-tech fairytale series "Artemis Fowl" has been caught in development limbo for well over a decade, but Disney has finally managed to adapt the popular source material. No doubt fans of the books are praying that this movie, due August 9, won't turn into 2019's answer to the box office dud "A Wrinkle in Time."