This Civil War-Era Home Was Abandoned With Everything Left Inside

Camila Villafane
This Civil War-Era Home Was Abandoned With Everything Left Inside August 17, 2020Leave a comment 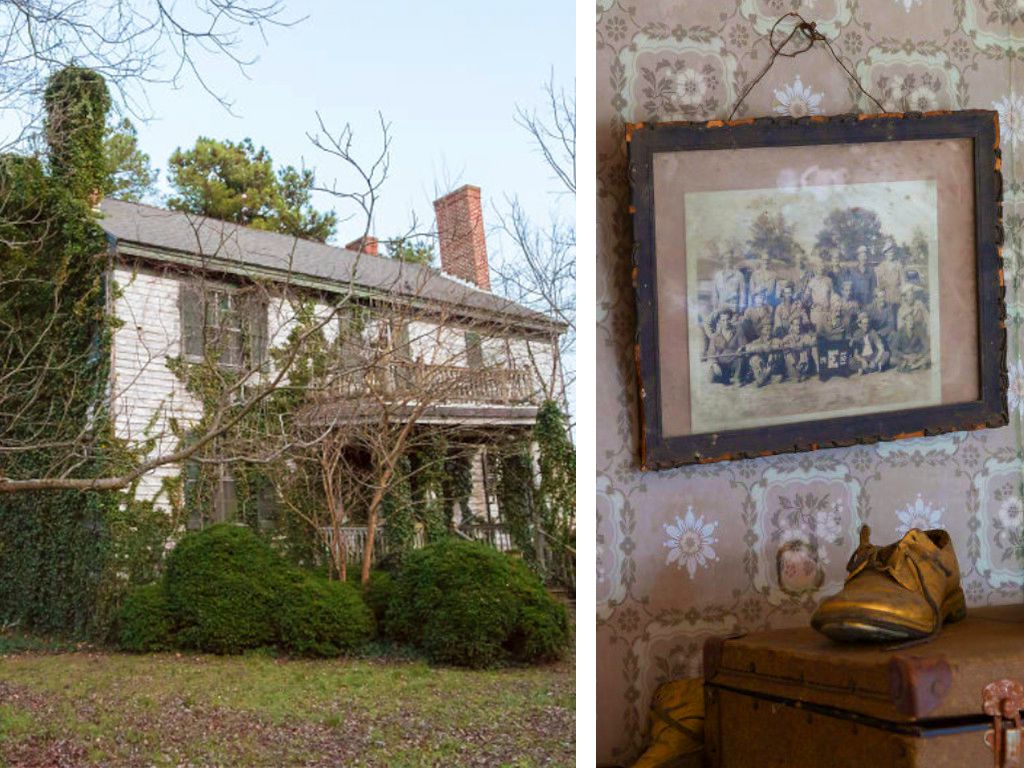 Bryan Sansivero of New York fancies himself a world traveler and urban explorer. And during one of his explorations, he discovered an abandoned house in Virginia that was filled with tons of history.

The house reportedly belonged to a colonel from the Civil War. Now, only remnants of the family that called this property home remain, even though the house itself looks as if it has been frozen in time.

The House Had Seen Better Days

From the outside, it looks like a nice two-story home surrounded by bushes and trees. But there are signs that this 1853 Greek revival-style home has seen better days, particularly the balcony that appears to be tilting to one side.

Vines are Overtaking the Property

This Virginia house might seem like it’s been lived in, but the exterior suggests otherwise. The vines have grown, spread and coiled towards the property like living predators ready to overtake the property. But the interior isn’t exactly in great shape either.

The Antique Living Room is Peeling Away

Although the ceiling looks like it’s ready to peel away or collapse, there are still a couple of interesting things around, such as the random bird perched on the mantle or the blue drapes and matching painting. It’s surprising that no one has pillaged this place.

The Bedroom’s Had Better Times

The bedroom also has a ceiling and walls that are just peeling away. There’s also some hint of mildew on the walls and some areas of the mantle that could use some TLC. But ironically, the taxidermy stag head hanging on the wall seems to have fared well.

There are Remnants of WWII

It seems odd that people would leave personal keepsakes behind, especially historical ones, instead of passing them from family member to family member, like this photograph of 19 members of a WWII battalion hanging on the wall.

Even the Armoire is an Antique

There are lots of interesting furniture items around that people would pay lots of money for, like the Victorian armoire in the bedroom or even that old style TV which isn’t likely to work after all this time. But this begs the question: Why did the owners' descendants go away in the first place?

There, among all the ruins, you’ll find military artifacts that undoubtedly held historical and personal significance for their original owners. Now they’re just lying around amongst antique bureaus and dusty floors full of debris that fell from the ceiling.

He Found a Washstand and Dresser

This is no ordinary dresser. It’s a marble-topped east-lake washstand and dresser. Back in the day, a washstand consisted of a small table that held a wash basin and water pitcher so people could wash their hands and faces. This was of course before modern plumbing came into the picture.

They Had a Tall Mirror Chair

It’s rare to find a mirror embedded in the back of a chair but lo and behold there’s a tall mirror chair in the foyer. It looks like a throne, which might indicate the value that the person who originally lived here placed on himself.

The Master Bedroom Has the Colonel’s Portrait

A lack of living people present makes this place a little eerie, but long ago, this was the master bedroom. There’s even a portrait of the colonel who called this place home. But now the ceiling overhead has water damage and the wallpaper is peeling.

If This Dressing Table Could Talk...

This Victorian vanity dressing table with built-in mirror is quite elegant. There’s also plenty of space for makeup and jewelry presumably for the lady of the manor. But in lieu of these items, the only things littering the table are books, envelopes and pieces of paper.

Papers and Pamphlets Remain on the Writing Desk

The colonel or his descendants left a huge part of their lives in this house and then went away, and while there’s nothing to explain what caused such an abrupt move, there are signs of who these people were, like the various papers and pamphlets across this writing desk.

The Grand Entrance Hall Staircase Makes Quite an Impression

Although most of the house’s interior is in a state of disarray, the grand entrance hall staircase still looks intact for the most part and makes a stylish first impression. Sadly, the stack of chairs at the end of the hall really takes away from the staircase.

Among the various furniture, Sansivero found remnants of the past on top of furniture like these old photographs and postcards on this table. It’s surprising that they’re not in worse condition given that the edge of the furniture has dust from the collapsing ceiling.

The Attic is Full of Odd Items

As he made his way to the attic, he was expecting to find lots of furniture, but surprisingly there was a bunch of odd items like two different pairs of leather boots, what appears to be a cloak, a bag and a piece of cloth made from animal skin, not to mention a lot of rubbish on the ground.

The Mid-Century Kitchen Was Fairly Decent

Sansivero was genuinely surprised by how much furniture remained inside this old house. And some of it is still in mint condition. This kitchen for example has a table full of different pots and the stove has kettles as if someone was making morning coffee before something forced them to leave.

The Kitchen Had a Rotary Phone

In the midst of decaying walls and cupboards with partially broken windows, there’s a piece of technology that was obviously installed after the colonel’s time. We’re talking about the vintage rotary phone that’s still hanging on the kitchen wall.

The Kitchen Had a Medicine Cabinet

These days, the only area of the house that has a medicine cabinet is the bathroom, but in this house, the medicine cabinet was located in the kitchen. The cabinet appears to have survived. There are also a couple of medicine bottles inside with labels that undoubtedly tell their own tales.

The Dining Room is Crumbling

The number of items in the crumbling dining room are like a treasure trove full of free antiques that surprisingly no one has bothered to loot. But it’s also a little sad to imagine that someone allowed this formerly beautiful room to rot away slowly.

Glass and Flowers Sit on Top of the Bedroom Dresser

This bedroom dresser appears to be in decent shape despite the fact that the surface is full of flowers, petals and pieces of ceiling that came crashing down. Surprisingly the mirror is intact and those old light switches from the old knob and tube wiring on the wall reminds us just how old this house is.

Old Books and An Antique Pump Organ in the Attic

The attic remains one of Sansivero’s favorite rooms to walk in, and it’s easy to see why given that the room is full of art and culture. And then there are all the books piled up on top of the antique pump organ. But what titles were among this collection and does the piano still play?

The Trunk is Filled With Memories

Another item that caught his attention was this old trunk in the attic. It reportedly had a bunch of old papers and letters inside. But who knows how many other things were just waiting to be discovered? There was much more to look at around the property.

Vines Had Broken Into the Home

As we mentioned earlier, vines were creeping towards the house, but when Sansivero walked inside, he found that some of the vines had already made their way inside, like the vines growing up this bedroom wall. This area has obviously seen better days.

It Has an English Basement

An English basement is often found on the lowest floor of a house. It has its own separate entrance from the rest of the building, too. Sansivero happened to stumble onto one during his tour through the house. But it too wasn’t in the greatest condition.

Some of the Residents Never Left

While some of the former residents of this property have seemingly vanished, others still remain. Sansivero discovered that there are generations of family members buried in the home’s private graveyard and it makes this harrowing property even eerier.