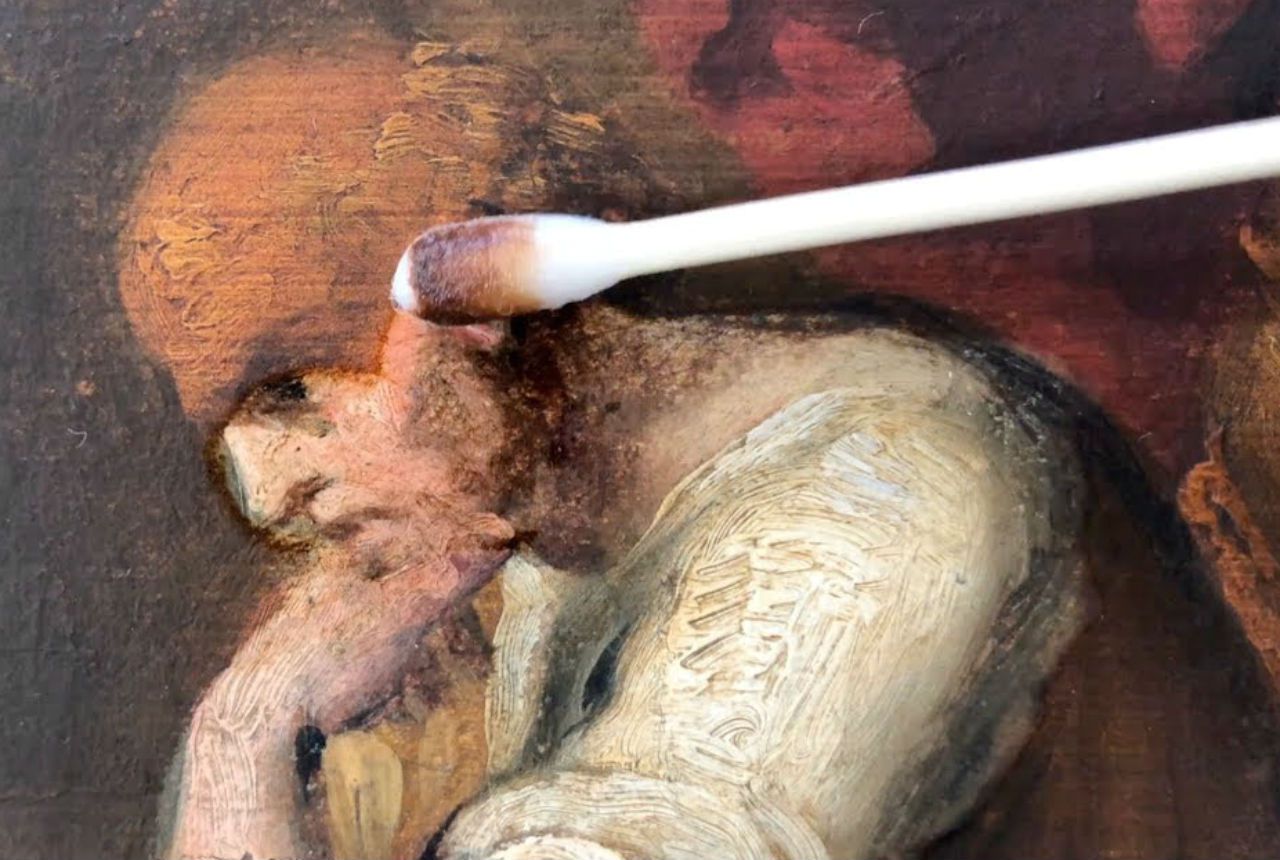 You may not know Julian Baumgartner by name. But his art restoration videos are exploding on the internet. That’s because they happen to be some of the most interesting, exciting and satisfying videos you'll ever see in your life. And they’re better than half of what Hollywood’s been putting out.

This Is Julian Baumgartner

Julian Baumgartner is the owner and operator of Baumgartner Fine Art Restoration in Chicago. He’s a second generation conservationist, having apprenticed under his father in 2000. And he’s worked with tons of different types of clients, from major organizations to independent art galleries.

[dx_custom_adunit desktop_id="RTK_K67O" mobile_id="RTK_5yk0"] Two years ago, Baumgartner started the YouTube channel Baumgartner Restoration. He posts videos of the work that goes into his art restoration, and he currently has over 500,000 subscribers. His videos get millions of views.

The Conservation of The Assassination of Archimedes

In December, Baumgartner went to work on The Assassination of Archimedes. The painting was done on paper and mounted to a wood panel that had seen better days, and the piece was covered in a dark varnish.

Aside from the painting being dirty, the effects of time on the wood it was glued to were apparent. As the humidity had gone through changes, so had the wood, causing waves, ripples, and tears.

[dx_custom_adunit desktop_id="RTK_K67O" mobile_id="RTK_5yk0"] Baumgartner went to work removing the discolored brown varnish. He got together some solvents and cotton swabs and began the process. Because the painting was small, he opted against using a roller to remove the varnish.

Different types and colors of paint can be what’s known as “fugitive,” which means they’re more vulnerable to solvents. Because of this, Baumgartner focuses on one small area of like-colored paint at a time.

Baumgartner works in small, concentrated circles, taking his time on each section. By working on only one color at a time, he has a greater chance of successfully cleaning the work without actually damaging it.

[dx_custom_adunit desktop_id="RTK_K67O" mobile_id="RTK_5yk0"] At the halfway point, Baumgartner takes a break from cleaning to check out the progress. The detail that can be seen now in Archimedes’ skin, hair and clothing is astounding, and it’s apparent at this point just how different the painting will wind up looking.

Using a reversible heat-activated adhesive, Baumgartner paints over the entire surface of the work. He then lays a thin layer of Japanese tissue paper over the adhesive, which adds a layer of protection over the paint.

Once he’s laid the Japanese tissue paper over the painting, Baumgartner applies a second layer of the adhesive, then adds a layer of Belgian linen canvas. The process is called facing, and it effectively stabilizes the painting from succumbing to any damage during handling.

The Most Delicate Process

[dx_custom_adunit desktop_id="RTK_K67O" mobile_id="RTK_5yk0"] At this point, Baumgartner needs to begin working on the actual removal of the painting from the wood panel. The first step in this process is to screw the wood panel onto a piece of MDF, which is sandwiched between two pieces of wood.

Baumgartner mounts a metal structure to the two pieces of wood and sets up a router between them. He sands the wood down slowly and evenly, eventually reaching a point where only 1-2mm of wood paneling remain.

Now that Baumgartner has gotten nearly to the bottom of the wood, it’s time to switch to hand tools. In the early days of restoration, the entire process of wood removal would have been done with chisels and hand planes.

[dx_custom_adunit desktop_id="RTK_K67O" mobile_id="RTK_5yk0"] Baumgartner works with hand tools until he’s reached a point where the thickness of the piece is about the same as the thickness of a playing card. But he still has work to do, so he makes use of a scalpel for the final stage.

Typically, when a piece has reached this point, solvents can be used to soften the remaining wood, making it easier to lift from the paper. That’s not the case here, and Baumgartner is forced to slowly chip away at the rest of the wood.

Once the last bit of the wood has been removed, the paper and paint that’s left is extremely delicate. The solution here is to bring back the Japanese tissue paper, which Baumgartner adheres to the back of the paper.

[dx_custom_adunit desktop_id="RTK_K67O" mobile_id="RTK_5yk0"] While adhering the Japanese tissue paper, Baumgartner opts not to use gloves. The reason behind this decision is that he wants the warmth from his hands to expand the paper, which will prevent any wrinkles from being trapped underneath.

Now it’s time to take the facing off of the paint layer. Using a solvent and a scalpel, Baumgartner first lifts the Belgium linen, then he repeats the process to remove the tissue paper layer.

In order to lift the Japanese tissue paper from the paint without causing any damage, Baumgartner must work meticulously. He uses the scalpel to gently scrape away the layer, eventually revealing the preserved artwork underneath.

[dx_custom_adunit desktop_id="RTK_K67O" mobile_id="RTK_5yk0"] The decision is made that the best way to stabilize the piece would be to mount it to two pieces of acid-free museum board. Once that’s completed, Baumgartner trims the edges down, leaving about 3/8 of a border for framing.

At this point, Baumgartner turns his attention to the actual restoration of the piece. He uses putty to fill in any areas of the painting that are missing or heavily damaged, creating a smooth surface to paint over.

Luckily, The Assassination of Archimedes didn’t require much in the way of actual retouching. But in order to make it appear whole and undamaged, Baumgartner uses archival and reversible paints to fill in the damaged areas.

[dx_custom_adunit desktop_id="RTK_K67O" mobile_id="RTK_5yk0"] Sometimes, Baumgartner says, the retouching process goes well, and sometimes it doesn’t. Because he uses reversible pigments, he’s able to easily remove any paint that doesn’t work well for the piece and try a second time.

Using a natural bristle brush, Baumgartner applies a synthetic resin varnish with a UV inhibitor to the surface of the painting. Working back and forth, he creates an even layer, always ensuring there are no visible brush strokes.

Now clean, filled in, and separated from its damaged wood backing, The Assassination of Archimedes is ready to be framed and returned to its owner. Baumgartner considers its restoration a huge success, but it’s only one of many that you can spend hours watching.

Watch the entire 12-minute video with Baumgartner's self-narration for more insight into his craft. It's well worth your time. And there are lots more art restoration videos on his YouTube channel, Baumgartner Restoration. Feel free to dive in if you have hours to kill. It's fascinating.