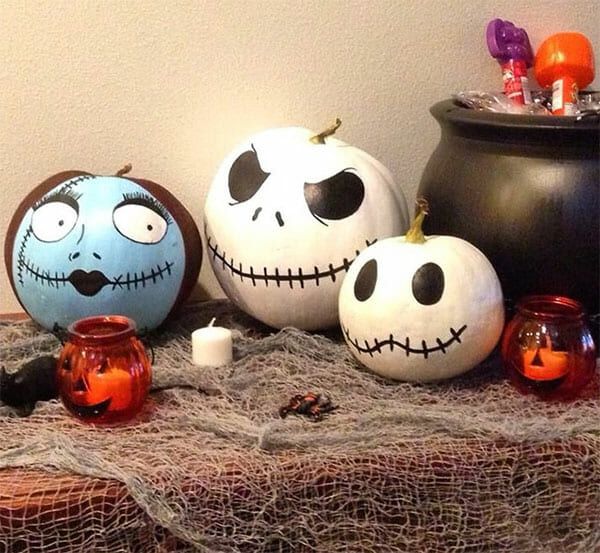 Show some compassion for your pumpkin this Halloween. Don't force it to go under the knife! Because there are other ways you can impress your friends, family and neighbors. Other than by chopping, carving, and slicing the hell out of your gourds, we mean. Just take a look at these masterfully painted Halloween pumpkins.

There's nothing corny about painting a haunted house on your pumpkin. You'll totally squash it this year if you do. You might even get an award for this spooktacular creation.

If your artistic skills are more frightening than a horde of zombies, then go batty with some ghoulish messages that are bound to darken your doorstep with the Halloween spirit.

Get into the spirit of Halloweentown by turning your jack-o'-lantern into Jack Skellington and his pretty, loving, and scary love interest, Sally. You'll certainly get a lot of people asking, "What's this? What's THIS?"

Show everyone in the neighborhood who's boss with these "Angry Birds"-themed pumpkins, cause conventional jack-o'-lanterns are for wimps.

Can you guess what this pumpkin wants for Halloween this year? We'll give you a hint: It sure isn't a bag full of tricks. He wants some treats! Give it to him or else.

Your Stem Is Growing

Say no to ghouls and say yes to Disney. You can turn your pumpkin stem into Pinocchio's growing nose.

When Arts And Crafts Explode

Go crazy with glue and glitter or glam up your pumpkin with all sorts of trinkets that will make your pumpkin look like it's just gotten a "Project Runway" makeover.

Turn your pumpkin into Cinderella's carriage, 'cause for some, the thought of living happily ever after with Prince Charming can be scarier than a pack of wolves.

When you have springtime on your mind, even though it's still months away, turn your pumpkin into this citrus-y piece of artwork.

When your pumpkin decides that you're not the only one that deserves to dress up and have all the fun, it’ll use the force to turn itself into the cutest "Star Wars" droid.

Nothing will get under your pumpkin's skin with this wrapping because they're way too wrapped up in their work. But they'll definitely make your front porch look scary cute.

Ready For The Ball?

Here's another awesome Cinderella-themed pumpkin idea that is a real ball. You don't have to be an expert in arts and crafts. You can just wing it.

Have A Fangtastic Time

What happens when your pumpkin doesn't pie? You turn it into a ghoulish-looking vampire and boo-yah! You can go ahead and scare all the other witches in the neighborhood.

You can't celebrate Halloween without paying ode to the popular Mexican festival that celebrates the day of the dead. It'll be deadly fun.

Eat, Drink, And Be Scary

Prepare to meet the girl of your screams with this scary screaming pumpkin. The whole neighborhood will be showing up at your front porch to take a pic with this lovely lady. Happy Haunting, ghoulfriend and keep on scaring.

You know that life is gourd when your pumpkins are spared a grizzly end at the hands of a carving knife and instead get painted full of polka dots, strikes and chevron patterns. Now these pumpkins can have a smashing good time.

It won't melt in your mouth or your hands, but it will keep all those other sticky little fingers away from your candy stash so you can trick-or-treat yo' self without having to share with anyone else.

If you really want to make a spectacle out of yourself, then turn your pumpkin into an eye. It'll be a real ball too. Oh, I’m sorry. Was that too cornea for you?

Damn you, climate change. You're melting the crayons all over our pumpkin. Even though Halloween is the perfect excuse to get creepy, add a little color to your backyard with this creation. This colorful alternative is so lit.

Who needs a pumpkin knife when you can just turn your pumpkin into a candy striper? Just hollow it out, make some popcorn, and have a gourd time watching some cheesy B-movie on your living-room couch.

You'll Die For This Duet

Why not turn a killer movie about the largest scare factory in the world into some scary-as-hell painted pumpkins this time around? Whoever told you Disney was all princesses, glitter, and pies, certainly didn't watch "Monsters Inc."

No way could you pass up this Halloween without painting your pumpkin into SpongeBob. It's clever, and you don't have to carve, but don't get too close or it'll absorb the life right out of you.

Find a new way to celebrate Halloween by turning your pumpkins into something you'd see at Pier 1 Imports. If anything, it makes for a nice centerpiece for Thanksgiving.

If punning was a science, you'd have a doctorate by now. But it's not so you'll have to make do with some witty and snarky comments on your pumpkin. At least now you'll have something to go with your resting witch face.

Shoutout to NASA for inspiring this out-of-this-world painted pumpkin! Add a mixture of colors that blend into each other. Mix it up with some glitter too, so you can have all those witches in the 'hood bowing down to the creator of the universe. Which is you, obviously.

In a world full of pumpkins, be a pump-cake instead. No one's ever met a pump-cake they never liked. It's better than ending up a jack-o'-lantern. They're so self-centered.

If carving and painting just aren't your thing, that's OK. You can still give your pumpkin a Halloween theme by cutting some batwings out of cardboard and gluing them to old Jack.

Give your neighbor's pumpkin to talk about with these painted pumpkin carvings of Gru and his Minions. You'll truly get the award for the most despicable front porch decoration in the whole neighborhood.

You turned your pumpkin into an ice-cream cone, but instead of going for the more traditional and happy unmelted version, you took things to a very creepy level. Now there’s ice cream brains and guts spilled all over the place.

No need to feel empty this Halloween. You can just turn your Halloween into a garden of a good time by turning your pumpkin into a scarecrow owl. He'll be the most outstanding pumpkin on the block.