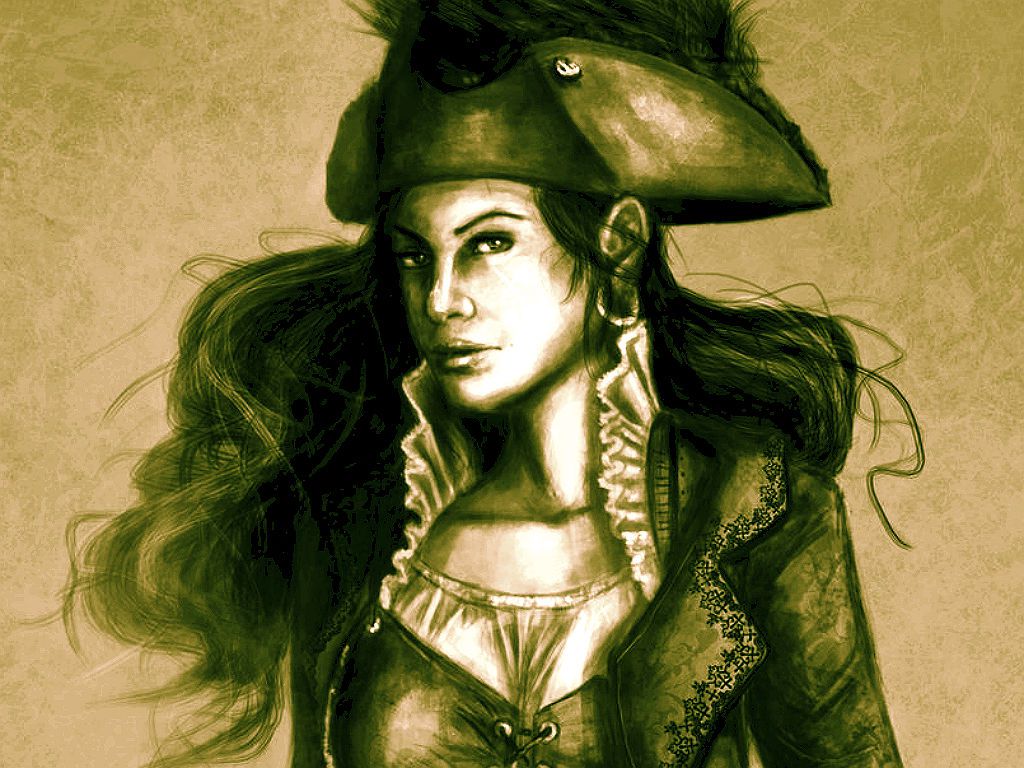 Don't believe everything you see in the movies - piracy was very much a woman's game and some of the most successful pirates of all time were women. Here are some of the coolest pirate women (that we know about) who put Blackbeard to shame.

Believed to be the most successful pirate in history, Ching Shih commanded around 70,000 sailors and ravaged coastal towns in South-East Asia. Eventually the Chinese government gave up fighting her and allowed her to keep all her stolen loot if she promised never to steal anything again.

The “Pirate Queen of Ireland,” Grace O’Malley was the daughter of a chieftain who was so respected and feared by fellow Irish clans that her rivals once arranged her bail when she was captured by the English. When at one point her son was arrested, she travelled to London and met face-to-face with Queen Elizabeth I to earn an official pardon just for being cool.

Fierce pirate Anne Bonny was married to two fellow pirates at different times, and alongside her second husband Calico Jack Rackham, recruited several pirates crews. She would often disguise herself as a man while on board – a trick that was also employed by her best friend…

Mary Read escaped to a life on the sea at a young age, often disguising herself as a man in order to do so. She and Anne Bonny were best friends, travelling the seas and stealing ships together (alongside Jack Rackham). When the trio were captured along with their crew, Read and Bonny managed to escape the hangman’s noose because they were both pregnant at the time.

A Viking princess, Sela of Norway took to the seas as a pirate at around the time her brother Koller was crowned king. Koller waged a war against Horwendil, a neighboring prince who had forsaken his throne in order to become a pirate. After killing Koller, Horwendil then found himself locked in a desperate battle against Sela for control of the kingdom.

While Queen Teuta of Illyria didn’t spend much time on a boat herself, she is famous for having overseen a phenomenal armada of pirate ships that travelled at will around the Adriatic sea, taking whatever goods they could seize in her name.

Alfhild was a real person, but so many myths and fairy tales have clouded our understanding of her that it’s hard to know what really happened. It’s believed that she was a princess who was kept in a tall tower for much of her life, but she ran away to sea to avoid an arranged marriage.

The “Lioness of Brittany,” Jeanne de Clisson took to the seas in order to avenge the death of her husband after he was executed for treason. She solely targeted French ships within the English channel, slaughtering their crew and stealing their loot.

Also focused primarily on getting revenge for her dead husband, Elise Eskilsdotter and her entire family waged war against Germany. Eskilsdotter was a member of the Norwegian nobility, and like many nobles of the time, she also violently opposed the Danish occupation of Norway.

One of the most important people in Islamic history, Sayyida al Hurra was queen of Tétouan, and turned to piracy in a bid to get revenge on the “Christian enemy.” She was well respected among contemporary Christians for her mastery of the Mediterranean Sea.

When Queen Elizabeth I’s Vice Admiral Sir Henry Killigrew went to sea on missions for the crown (and/or for piracy, depending on your perspective), his wife, Lady Mary Killigrew, would also take to the high seas, engaging in her own piracy. It’s believed that in lieu of a ship’s crew, Lady Killigrew took her castle staff.

Another member of the Killgrew family, Elizabeth Trewennard also got involved with some piracy when she and her husband attacked a damaged Spanish ship on its journey to shelter. Trewennard was later equitted.

A relatively recent pirate, Lo Hon-Cho sailed on the South China seas around Hong Kong in the 1920s. She commanded a large pirate navy of up to sixty ships, but was eventually betrayed by her crew and handed to the authorities in exchange for a military pardon.

A Swedish baroness, Christina Anna Skytte entered into a secret piracy business with her husband, brother and other partners, and took part in the raid and sinking of a ship. Skytte escaped to Denmark to avoid arrest after their pirate cabal was discovered, but no prosecution or order for her arrest was ever produced, as under the shortsightedly patriarchal laws of the time, a married woman was considered a minor.

Much of Anne Dieu-le-Veut’s real life has become obscured by legends, but she was a real person who was deported from France to Tortuga as a criminal before engaging in piracy. It’s believed that Dieu-le-Veut demanded a duel from the pirate Laurens de Graaf, but he refused, and instead ended up marrying her.

A privateer and pirate, Ingela Gathenhielm originally worked with her husband before taking over the family business upon his death. Gathenhielm served under King Charles XII of Sweden during the Great Northern War. After peace was agreed, Gathenhielm sued the crown for monetary compensation as she felt she was not adequately paid for her work as a mercenary.

Widely considered to be the first American-born pirate, Rachel Wall was also the last woman to be hanged in Massachusetts at just age 19. Wall would stand on the deck of their ship and call for help; when passers-by came to provide assistance, her husband and other pirates (of various genders) would spring out to attack.

One of the very few women to actually be put on trial for piracy, Martha Farley’s excuse in court was that she had no idea her husband Thomas had meant to raid a ship and kidnap its crew. According to Farley, her genius partner had decided to try his hand at piracy while bringing his wife and two children along for the ride. Whether or not this story was true, the court decided to acquit Farley because they didn’t want to make orphans of her children (especially as her husband had evaded capture and left her to take the fall).

An English convict who was sent to a prison colony in Virginia, Mary Critchett and her fellow prisoners overpowered their guards on the journey and endeavored to begin a life of crime all over again in the New World. They were captured soon after and put to death for piracy.

Not much is known about Flora Burn, except that she likely operated on the East Coast of North America in the 1740s. It’s worth noting that the most successful pirates are the ones who never get caught, and who leave so few survivors that we don’t even know what they got up to.

One of the first female pirates in Australian history, Charlotte Badger earned a place on the ship Venus due to a shortage of manpower available at the time. When the honest ship’s captain went ashore in Port Dalrymple, the crew who stayed behind absconded with the ship for a life of piracy.

Another member of the crew of Venus, Catharine Hagerty didn’t stay on the ship long after it turned pirate. She was put ashore with some supplies alongside another woman, a child and a pair of convicts. Hagerty died soon after, and Badger, who presumably stayed aboard Venus, was never heard from again.

A third woman aboard Venus, Charlotte Edgar was also put ashore with Hagerty. It’s unclear how much she and Hagerty were actually involved with the mutiny considering their speedy exit from the ships crew, but unlike Hagerty, Edgar not only survived, but went on to be one of the first settlers of New Zealand.

Margaret Jordan was being sent by boat to Nova Scotia to settle some debts, when her husband attacked the ship’s captain and commandeered the ship. Later in court, witnesses insisted that Jordan herself was complicit only because she was afraid of her abusive husband, but she was put to death for piracy nonetheless. Not all piracy stories are fun.