The Best Secret Menu Items at Your Favorite Chain Restaurants 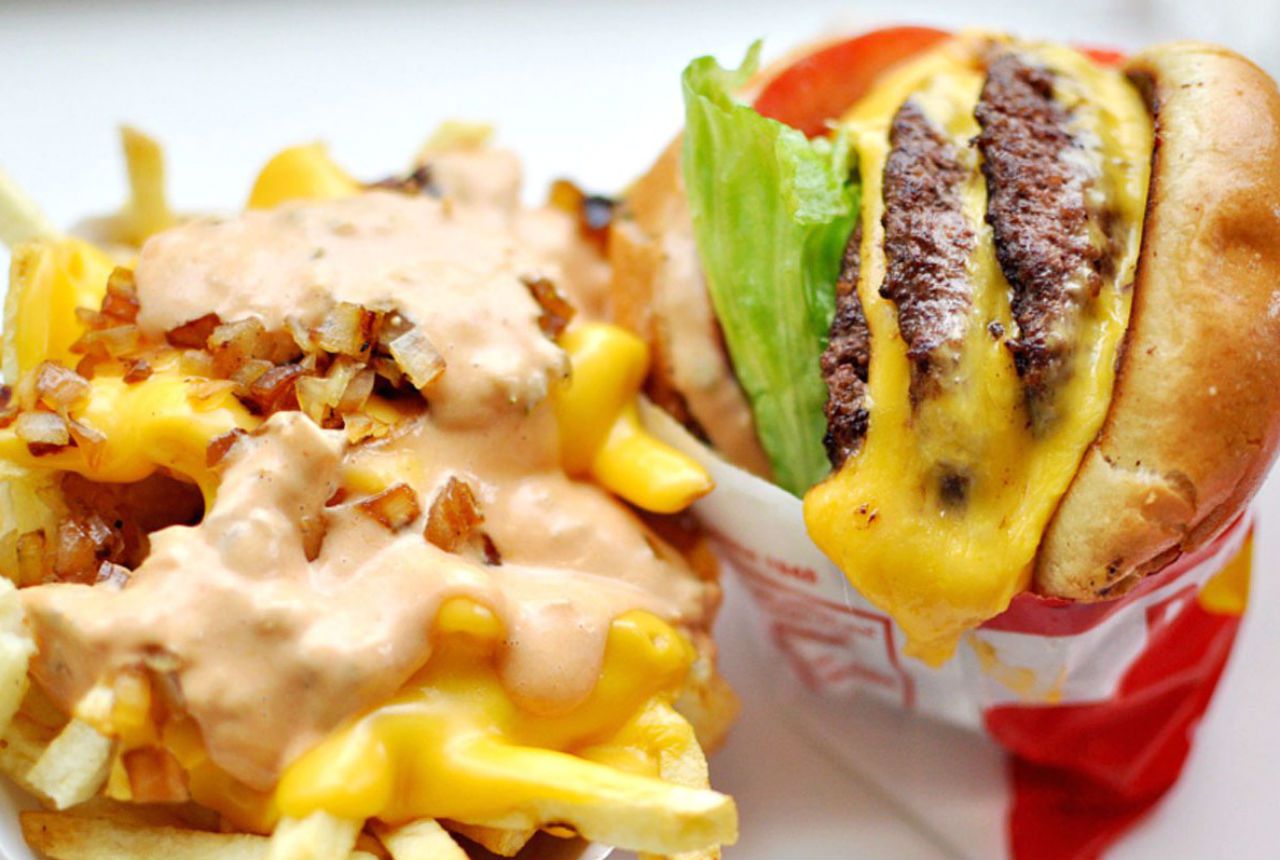 So you’re sick of your favorite chain’s regular menu items. You need to spice up your culinary diet a bit. But money doesn't grow on trees. We’ve been there. We get it. That’s why we’ve scoured the internet for the best tips and tricks when it comes to chain restaurants. And by tips and tricks, we mean finding the very best secret menu items.

Imagine a burrito. But instead of a single flour tortilla encasing its delicious interior, there’s an entire quesadilla. That’s the Chipotle quesarito, and while it’s delicious, expect to shell out the money for both a quesadilla and a burrito if you want one.

[dx_custom_adunit desktop_id="RTK_K67O" mobile_id="RTK_5yk0"] Panera Bread is generally known for its, well, bread. But the chain has been exploring some lower-carb options for its customers in recent years. Enter the Power Chicken Hummus Bowl. It’s like a Panera sandwich, minus the carb-heavy exterior.

While KFC poutine is actually a thing in certain areas (looking at you, Canada), it’s an off-menu item pretty much everywhere else. All you have to do is order a regular Popcorn Chicken Meal and ask for gravy and cheese.

While Whataburger may not carry the waffle side that traditionally accompanies fried chicken, the company does carry pancakes before 11 a.m. Which means all you have to do to create this knock-off dish is order the two items separately and smother them in syrup together.

[dx_custom_adunit desktop_id="RTK_K67O" mobile_id="RTK_5yk0"] The Spicy Char is a great option for those who love the OG Chick-fil-A sandwich but could use a little spice (and fewer calories). Just ask for the traditional crispy chicken patty to be swapped out for the spicy char-grilled.

If indecision is your key drive-thru personality trait, the Wendy’s Barnyard Burger is sure to satisfy. With a combination of beef, crispy chicken and bacon, it quite literally is a barnyard between buns. Just add a burger patty to the Asiago Chicken Ranch Club.

The thing about In-N-Out’s secret menu is that it isn’t really all that secret. So you can literally just ask for something by name, and they’ll make it for you. Which is good, because the Flying Dutchman — cheese melted between two burger patties — isn’t exactly something that’s created from two regular menu items.

[dx_custom_adunit desktop_id="RTK_K67O" mobile_id="RTK_5yk0"] Who would’ve guessed it’d be Burger King that came out with the most gluttonous off-menu burger of any chain? If you think you can handle it, the Suicide Burger is four burger patties, four slices of cheese and bacon with special sauce.

It may sound a little out there, but the addition of peanut butter to a burger is actually one of the best things to ever happen to a burger. And all you have to do to get this savory/sweet concoction is order a ShackBurger with bacon and a side of peanut butter spread.

The morning following a long night of drinking typically goes something like this: you wake up with a massive headache and an astonishingly unquenchable thirst. Then, after swallowing an ocean’s worth of water, all you want is greasy, calorie-dense food. Red Robin has that, and it’s a burger topped with bacon, chili, mushrooms, cheddar and a sunny-side-up egg.

[dx_custom_adunit desktop_id="RTK_K67O" mobile_id="RTK_5yk0"] Five Guys’ Patty Melt is essentially just a customized grilled cheese with a burger patty and onions. But what makes this Patty Melt so damn good is that the bread is actually their regular burger bun, grilled to perfection.

The El Loco at B-Dubs is a wing hack that wound up being so popular, the restaurant chain decided to just go ahead and make it a thing. You can’t really blame them, because the El Loco is what happens when nachos meet wings, and that’s a tailgate snack anyone can get behind.

Taco Bell has two Hulk burritos on their secret menu, but we tend to think that when it comes to enormous green superheroes, bigger is better. Which is why you should go with The Incredible Hulk, the Bell’s Five-Layer Burrito with guac instead of nacho cheese.

[dx_custom_adunit desktop_id="RTK_K67O" mobile_id="RTK_5yk0"] The Bun Taco is exactly what it sounds like. It’s Del Taco’s classic taco on a burger bun. So imagine two to three times the taco filling in sandwich form. It’s the true beauty that lies in a fast food chain that specializes in both tacos and burgers.

Fun fact: Subway’s flatbread sandwiches can be turned into personal pizzas just by keeping the bread flat. It’s incredible really, but what’s even more incredible is their Taco Pizza, the Chipotle Southwest Steak and Cheese Wrap laid out on a flatbread.

They may not sound like much, but Sonic’s version of battered and deep fried pickles is right up there next to their tots in terms of delicious fried side snacks. And while they’ve long been believed to be discontinued items, the truth is that Pickle-O’s are still very much available.

[dx_custom_adunit desktop_id="RTK_K67O" mobile_id="RTK_5yk0"] If you haven’t had In-N-Out fries “Animal Style,” then you haven’t really had In-N-Out fries. Because the addition of melted cheese, pickles, extra spread, and grilled onions to hand-cut fries is really the only way they should be eaten.

Look, if you’re on a diet, Olive Garden is probably not going to be your top pick for dinner. But if you’re forced to be “family” for a night, just remember that you can always order extra vegetables in place of noodles on any pasta dish.

Somewhere along the line, someone at Carrabba’s decided it’d be a good idea to top fettuccini alfredo with chicken marsala. That person never looked back, and neither should you, because Freduccini is about to change your entire pasta game.

[dx_custom_adunit desktop_id="RTK_K67O" mobile_id="RTK_5yk0"] OK, so Disneyland isn’t exactly a chain restaurant. But there are multiple locations, and the food quality is about on par with your average chain, so call it even. They’re here because of their Chili Cone Queso, which is typically made with meat chili but may actually be better vegetarian style.

This sweet, berry-filled treat is a definite DIY (as in, no one on staff is going to put this together for you), but it’s 100 percent worth it. Just dump a Yogurt Parfait into the middle of an order of Hotcakes and boom. McCrepes.

There isn’t a whole lot of information regarding the ingredient list on this one, but we’re going to assume apples and cinnamon are somehow involved. The one problem is that if your local Jamba employee has no idea what you’re talking about when you order an Apple Pie Smoothie, you’re out of luck.

[dx_custom_adunit desktop_id="RTK_K67O" mobile_id="RTK_5yk0"] It’s the closest you’re going to get to Hogwarts, unless you’ve got a Universal Studios pass. The Butterbeer Frappuccino is created by mixing both caramel and toffee nut syrups into Starbuck’s Vanilla Bean Cream Frappuccino. Delicious, but you’re going to have to be “that person” ordering it, if you want one.

The Banana Cream Pie Blizzard was a DQ menu item that was removed some time ago, much to the dismay of dessert lovers everywhere. Loaded with banana, banana syrup and pie crust, Dairy Queen can definitely still make them… you just have to ask.

Because some secret menu items are too good to be true. Like the entire IHOP secret menu, which seems to be making its way around the internet a lot, probably on account of things like Steak Tartare and Ceviche. Our advice? Don’t be calling your local IHOP asking about their Roquefort and Pear Soufflé availability.