The Best Sightseeing Destinations That Have Been Ruined by Tourists

Sophie Dunne
The Best Sightseeing Destinations That Have Been Ruined by Tourists February 25, 2020Leave a comment 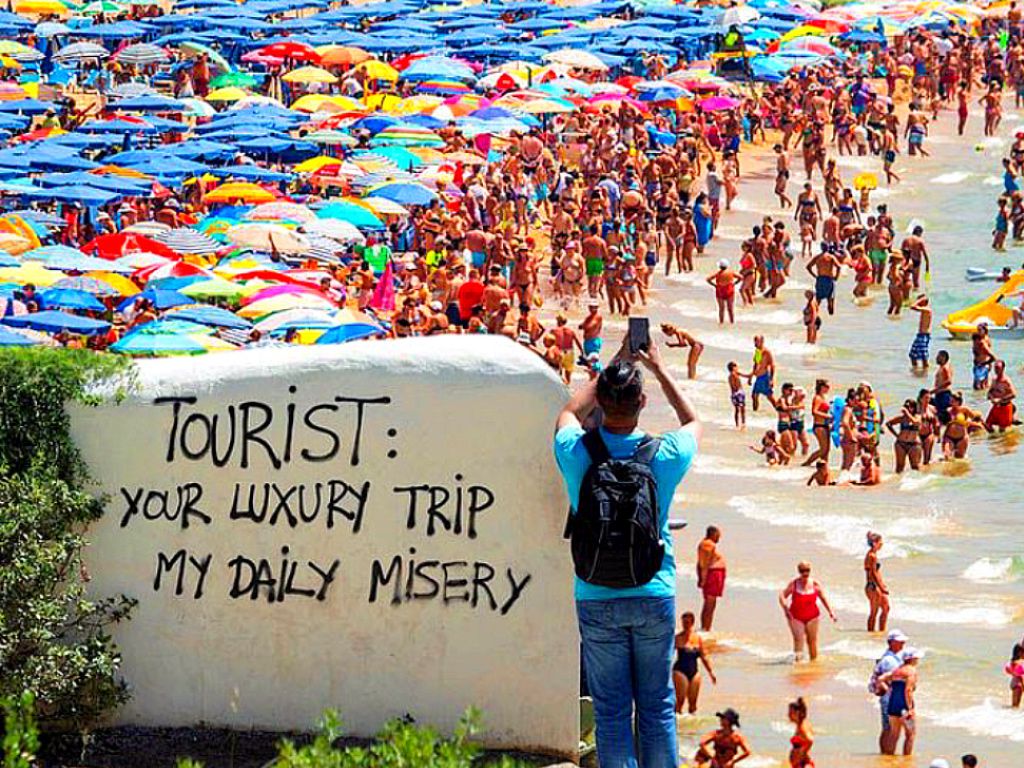 When traveling, you always want to experience some of the area's historic and cultural attractions. However, sometimes the very act of being a tourist can cause damage to the places you’re visiting. Whether it’s due to vandalism or overcrowding, here are 25 beautiful destinations that have lost their original quality thanks to tourists.

The narrow streets of this Italian coastal village struggled to withstand the 2.5 million visitors it received every year forcing authorities to put a cap on the amount of tourists allowed to visit the location. Fearing the fragile structure of the hiking trails, authorities developed an app that alerts hikers if a trail is too crowded.

The picturesque island in Thailand put a ban on tourists until 2021 because of its overtourism which caused a significant amount of destruction to the native coral. For years, 5,000 visitors flocked daily to Maya Bay which became famous after Leonardo DiCaprio filmed "The Beach" there in 2000.

Although you can still visit Pompeii, archaeologists are worried about how much longer the ancient ruins can withstand the millions of visitors that flock there each year. In 2018, over 20 new rules were introduced by archaeologists in order to protect the city from overactive tourists.

The Tree of Ténéré: Niger

It wasn't the busiest tourist attraction, but it certainly did attract a hefty amount of visitors. The Tree of Ténéré was famous for being the only tree for a 250-mile radius in the Sahara Desert. However, in 1973 it was run over by a drunk driver while they were following the popular caravan route where the tree served as a landmark.

The Great Wall of China: China

Parts of the Great Wall have crumbled from harsh weather conditions but also from human activity. The wall stretches over 13,000 miles long and although some sections of it are in perfect condition, other areas need a little more TLC. Tourists have also been known to steal bricks for souvenirs from the 2,300-year-old work of excellence.

An abundance of tourists flock daily to the Bahamas in order to visit the popular Pig Beach. However, the attraction has become a little too popular as visitors have increasingly overcrowded the beach. In 2017, tourists were even accused of killing the pigs by feeding them alcohol.

The Batu Caves in Kuala Lumpur is meant to be a tranquil temple and a place of worship but locals are bombarded with hyper tourists and a flood of selfie takers. In order to get inside the impressive cave, tourists need to climb hundreds of steep steps to the top which can be a dangerous struggle when it's packed with people.

Bali is known for its tropical weather, exquisite rice fields and breathtaking islands. It's also known for having a swing in the middle of a picturesque jungle that gives you the most Instagram worthy photos, and it looks like an awesome experience too. However, the long lines of people waiting for their turn makes the experience a little less authentic and a lot more like a tourist frenzy.

The city of Kyoto is know for its dainty streets and charming tea houses, as well as being home to the alluring geishas. However, in recent years, the former capital of Japan has seen an outpour of tourists, with a lot of them behaving badly. A group of local residents in Kyoto even voted to charge tourists $92 if they were caught taking pictures of traditional Japanese houses on private property.

Hallstatt is a small village in the Swiss Alps that is home to only 800 residents. Due to its elegant location, quaint buildings and the fact that it was used as inspiration for the Disney film "Frozen," the village sees a staggering 1 million visitors each year, but residents have expressed how selfie-obsessed tourists take over the village and how locals are desperate to find peace and quiet in their own hometown.

The Blue Lagoon is Iceland's most popular tourist attraction with over a million of visitors each year. The geothermal spa located in a lava field boasts stunning natural views for holiday makers to snap the best photos. However, a high level of tourism seems to have turned the popular spot into a "Dirty, lukewarm, crowded disappointment," according to a review on TripAdvisor.

In recent years, there have been major concerns about the amount of hikers climbing Mount Everest, a lot of them being inexperienced. As well as an influx of hikers, more people are camping at Base Camp for sightseeing with no intentions of actually reaching the summit. Many campers at Base Camp have been accused of dumping tons of garbage, as well as human waste, defiling the world's highest mountain.

Amsterdam is always full of tourists, which has done well for the city's income. However, too much of anything isn't good either... The city has had to say goodbye to its famous Bloemenmarkt, a floating flower market that was built in 1862. The market saw a decrease in revenue when massive crowds of tourists were blocking customers from purchasing goods. It soon closed down and has been replaced by souvenirs shops.

Excessive tourism has impacted the largest religious monument in the world causing archaeologists to worry about the temple's structure. Built in the 12th century, visitors were known to gather to the famous site to watch the Cambodian sunset. However, authorities have limited the amount of visitors per day as overwhelming numbers of tourists threatened to ruin the impressive architecture.

The Incan citadel built in the Andes Mountains attracts thousands of tourists everyday. However, the 570-year-old city was not built for the heavy load of daily footsteps. Fearing structural damage to the site, rules have been made to stop tourists from roaming around the ruins freely. Instead they must hire a tour guide and follow a specific route.

The Pyramids of Giza: Egypt

The historical societies in Egypt are no strangers to millions of tourists visiting every year and have many strict rules in place to manage the crowds. However, in 2016, one German teenager managed to slip past security when he illegally climbed to the top of one of the colossal pyramids in order to get that perfect selfie. Tourists still continue to climb the ancient stones, ultimately damaging the preservation of these buildings.

In 2018, the trendy, tropical beach that once hosted wild raves was closed down for a six month rehabilitation period. As a result of overcrowding, authorities discovered over 800 environmental violations including 11 tons of garbage and raw sewage flowing in the sea. The beach has since been re-opened but a strict cap of 19,000 people per day was implemented as well as a ban on beach parties.

The popular Spanish city sees tourists year-round from all over the world and the locals have had enough. Since there have been many cases of tourists acting disorderly, locals have taken to the streets to protest against Barcelona's visitors. In 2019, residents of the city even attacked a bus full of holiday makers to make their point.

The Temple at Luxor: Egypt

The Temple at Luxor is used to seeing a flood of tourists on a daily basis and curators are experts at dealing with the crowds. But once in a while, one misbehaving tourist gives every other visitor a bad name. In 2013, a Chinese teenager defaced ancient hieroglyphics and then posted his artwork on social media, only to be caught by the Egyptian Authorities.

Venice is said to already be in danger as the city built on water sinks more and more each year, but an overwhelming amount of tourists all year round is sending the city into a crisis. Strict rules for tourists have been implemented to tame the excessive littering and vandalism carried out by visitors.

Switzerland's Lake Lucerne is no stranger to an overload of tourists. During their summer season, the small city entertains about 20,000 visitors making it almost impossible for anyone to actually enjoy the well-known lake.

Hanoi is home to a dramatic train track that runs directly through a busy street which has recently become the main attraction for selfie-lovers. Businesses were benefiting hugely from the amount of people turning up everyday, but in 2019, too many tourists surrounded the tracks and the train had to pull on its emergency breaks. As a result, the cafés and shops next to the tracks were ordered by the government to close down.

The Spanish island of Ibiza sees an influx of holiday makers every year which has caused local islanders to take to the streets in protest. The island has seen a rise in crime because of its 24 hour non-stop activity amongst tourists. In an interview, one resident said, "We don’t reject tourism but we do reject tourism which is unlimited, disrespectful and excessive."

Tourism can boost the economy of a city but it can also damage its monuments. The small Greek island of Santorini attracts a huge amount of visitors during its peak season which forced authorities to implement a cap on visitors from cruise ships down to 8,000 per day. In 2015, a staggering 790,000 people from 636 cruise ships visited the cramped, little island.

The Spanish Steps in Rome are a famous attraction for tourists and definitely a must-see when visiting the city. But in 2016, the city spent $1.68 million to clean chewing gum and red wine off all 135 steps. Since then, the government has enforced a ban forbidding anyone from sitting on the steps at all, that includes a hefty minimum fine of $280.