Camila Villafane
Black Cat Made a Bizarre Transformation as He Aged That Led His Owner to Question His Habits January 2, 2020Leave a comment 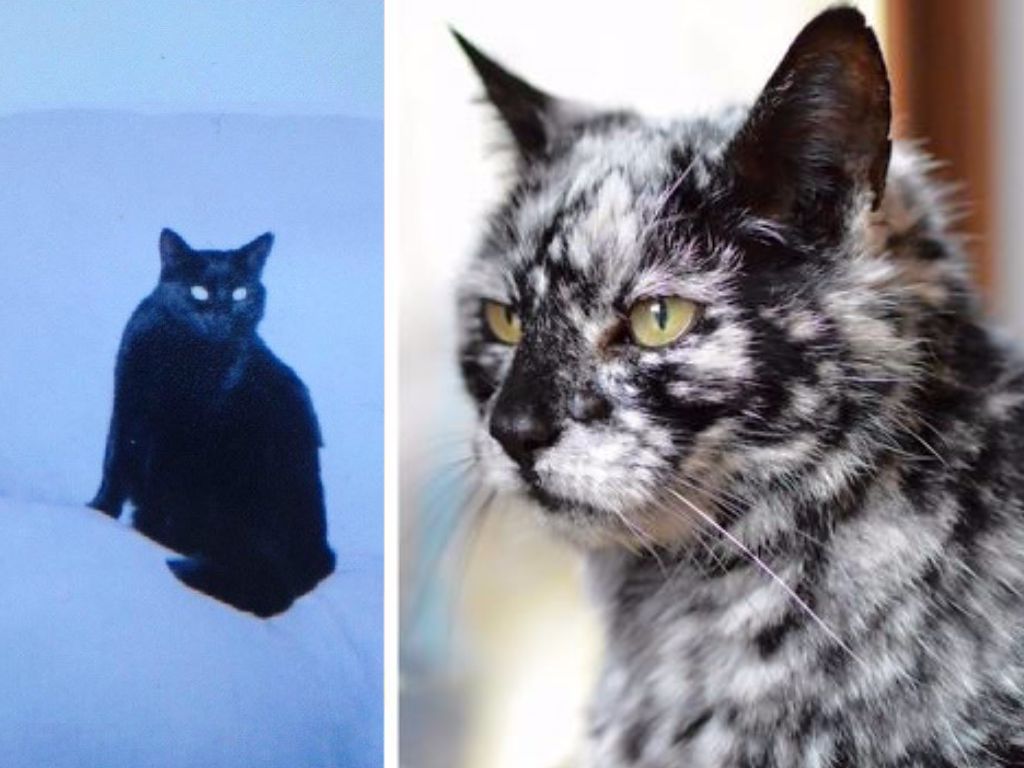 We're constantly evolving physically and psychologically. So, why would our pets be any different? Well, one man named David Platt discovered that cats get better with age. When his pet turned 7 years old, he underwent a shocking transformation that turned him into one of the most unique cats on the face of the Earth.

Scrappy Was an Average Shelter Cat

The year was 1997 and Scrappy was just an ordinary black kitten living in a shelter. Then David Platt walked through the door, took one look at Scrappy and feared no one would ever want him because of something that was perfectly natural for Scrappy.

He Was Difficult to Adopt

Scrappy wasn’t mean. He didn’t scratch if someone tried petting him or hiss when people got too close. He just happened to be black. Sadly, black cats are the least popular cats to adopt. But when Platt took him home, he thought he knew everything there was to know about Scrappy. But he was dead wrong.

Black Cats Are an Omen

Superstitious people usually freak out when they see a black cat crossing their path. They believe that this is a sign of bad luck or impending doom. But although they’re not harbingers of the apocalypse, they are pretty popular pets for a certain supernatural creature.

Black cats are known as familiars among the witch community. In fact, if you’ve read any books about witches or seen witches in movies or television, you likely saw a black cat by their side. But was there a supernatural element to this cat’s destined transformation?

They Were Once Persecuted

Black cats like Scrappy were often persecuted in the Middle Ages because of wide-spread superstition. This led to a mass cat-hunt which resulted in the felines’ extermination. Although some superstition has remained to this day, some cultures embrace them and consider them a good luck charm.

Some Consider Them Lucky

Black cats aren’t a symbol of bad luck in Japan or in Britain. Many people in these regions carry a key ring or a trinket in the form of a black cat for good luck. In Scotland, if a black cat visits a home, it symbolizes prosperity. But did Scrappy’s metamorphosis signal the end of days for Platt?

Their Black Coats Enhance Their Eyes

Scrappy’s eyes certainly couldn’t shoot laser beams or anything of the sort, but his black coat allowed his beautiful eyes to stand out more. It’s one of the perks of being a black cat, but it’s not the only one.

Researchers at the National Institute of Health learned that the genetic mutations that result in a cat’s black fur also provide them with protection from certain diseases. That means researchers can potentially learn how to enhance the human immune system by studying these cats. But black cats also make great chameleons.

Their Color Goes With Everything in the House

It doesn’t matter what color your furniture, carpets or drapes are. Black cats fit in with any décor. Besides, black hair doesn’t pop out as much on dark furniture as other fur colors. But something was happening within Scrappy that would take this advantage from him.

It turns out that if a black cat has a tabby stripe gene and spends a lot of time in the sun, the sun’s rays will break the fur pigments down and turn the black cat’s coat into a rusty brown color. But the sun wasn’t to blame for what happened to Scrappy.

Platt Had No Idea What Was Happening

Platt knew that his adorable kitten wouldn’t remain small forever. As the years went by, Scrappy continued to grow into a cat that resembled a striking black panther. But he didn’t stay that way. In fact, he morphed into something that didn’t resemble his former self at all.

Scrappy Was Going Through Changes

As Scrappy turned 7, something weird started to happen. Platt’s cat underwent a shocking transformation that no one could have foreseen. He was no longer a black cat, at least not fully. What was he turning into?

Scrappy’s black fur was splotched with white hairs. Platt didn’t know what was happening to him. It was as if someone had bleached his pet’s fur! But who could've done something so cruel to his pet? Was Scrappy shape-shifting into something otherworldly?

Scrappy Had a Lot in Common With Michael Jackson

Veterinarians believed that Scrappy had vitiligo, a condition that affects pigmentation. Michael Jackson reportedly had it, too and so does former “America’s Next Top Model” Winnie Harlow. But how did Scrappy get the condition?

It turns out that vitiligo isn’t just a human disease. Cats can develop this disorder, too. But it’s extremely rare, so Platt took Scrappy to a specialist to confirm the diagnosis. Was there anything they could do or was his cat’s black fur gone forever?

Vitiligo Didn’t Stop Him From Living

Scrappy didn’t allow vitiligo to get the best of him or slow him down. By the time he was 19, the cat still had a lot of life left in him. “I guess you could say he rules the street and every other cat stays away,” Platt wrote on Scrappy’s Facebook page. But could the kitty get sicker?

It Didn’t Affect His Health

Although vitiligo affects the skin, or in this case, the fur’s pigmentation, Scrappy was one of the healthiest cats his vet had ever known, and you certainly didn’t want to pick a fight with him. Just ask some of the other kitties that roamed the neighborhood.

Platt claimed he named his cat Scrappy because he saw right away that his feline had some serious attitude, especially when it came to picking fights with other neighborhood cats who were older than him. Luckily for Platt, he was a furball full of love when it came to humans. But there was one thing he didn’t love.

He Was a Horrible Model

Platt wanted to share how adorable Scrappy was with the rest of the world. Unfortunately, Scrappy wasn’t very cooperative when it came time to take photos. In fact, he would often look away from the camera. But there was one thing that was undeniable.

He Won His Owner’s Heart All Over Again

Scrappy was truly unique. His fur coat’s interesting white splotches made him stand out among the rest of his pack. He was also so cute that he managed to win Platt’s heart over and over. But the color of his coat wasn’t the only thing that made him interesting.

He Was Obsessed With Fruit

Most cats would rather eat a mouse than reach for something non-fattening like fruit. But Scrappy was a total rebel. He had a reputation of jumping onto the kitchen table and swiping a banana every now and then. But there was one thing he had in common with other cats.

He Didn’t Mind Being Boxed Up

Like most cats, Scrappy was on cloud nine whenever he got to curl up inside a cardboard box. In fact, you couldn’t pry him away from his box if you tried. This was his happy place. But he soon became everyone else’s source of happiness.

He Became a Social Media Star

Scrappy’s Facebook page has about 141,422 likes. And people continue to fall in love with this beloved feline. It’s just too bad that he’s not around to appreciate just how much everyone still adores him.

Scrappy Was in a Class of His Own

They say a leopard can’t change its spots, but Scrappy proved that a cat could change its fur. His gorgeous fur pattern dazzled thousands of netizens. Platt had no idea that Scrappy was destined to blossom into such a cute cat when he got him in 1997. This made him miss him so much more.

He Left a Legacy of Love

September 23rd, 2019 would have been Scrappy’s 22nd birthday. Platt and his family continue to celebrate it, despite the fact that the cat passed away. “You know how much we miss you. You are loved all over the world,” was written on his Facebook page. But although Scrappy is gone, he’s certainly not forgotten.