Bridget Daly
Blind Dad Reduced To Tears After Rude Passengers Refuse To Give Up Their Disabled Seats On A Jam-Packed Train March 30, 2018 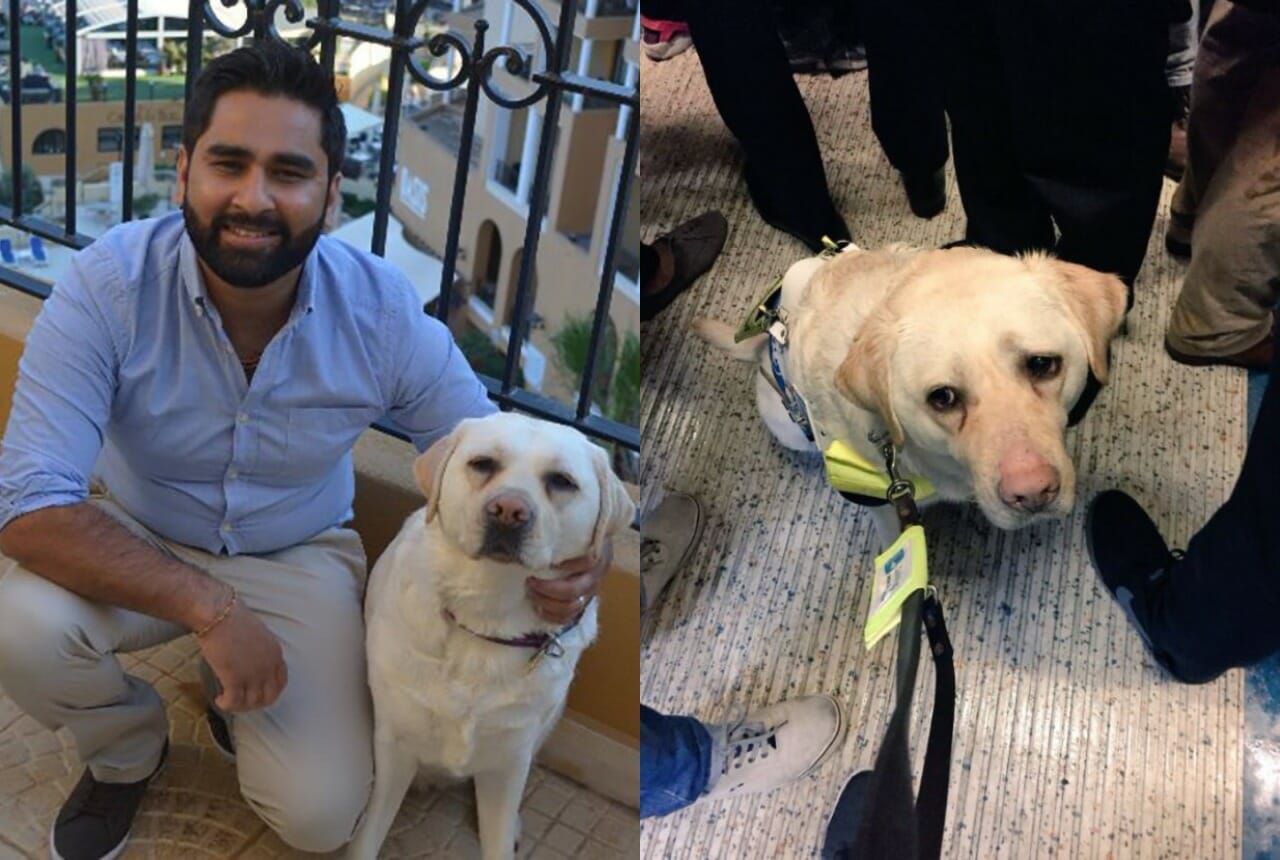 If you needed any more proof that people are generally terrible--here it is. When 37-year-old Amit Patel attempted to board a packed London train during a busy commuting period,  he assumed that his status as a disabled, blind traveler would ensure that he received a spot in the sitting area. However, his pleas for a seat paired with the obvious distress of his guide dog, Kika, proved to not be enough of a motivation for his fellow travelers to offer him a seat. Forced to endure the grueling journey while both terrified and disoriented, Patel's ordeal will surely make you think twice about your next trip on public transport.

Amit Patel is a 37-year-old former ER doctor who lost his sight five years ago after suffering a haemmorrhage behind his eyes. Now, Patel maintains his independence with the help of his adorable guide dog, Kika. Patel uses social media to educate others about the realities of disabled life, encouraging individuals to not make snap judgements when they first learn of his condition.

Thankfully, the gravity of Patel's condition is softened by the services provided by his guide dog, Kika. "Us Guide Dogs are constantly being tested when working, we're trained to ignore distractions & keep focused on the job we are doing," wrote "Kika" on his official Twitter account.

Recently, Patel and Kika walked to the end of a London public transit platform hoping to grab a seat on a Southeastern train bound for Waterloo. When he arrived at the disabled section, Patel was both shocked and disgusted when no one gave up their seat to allow him to sit down. "Even with dad giving me the command 'find a seat' not one passenger gave up their seat!" explained Patel on Kika's Twitter account.

A Complete Lack Of Empathy

On Kika's official Twitter page, it's clear to see that the guide dog was incredibly distressed by not being able to follow the command of his owner. "Dad had to stand with his back against the doors whilst trying not to slip & I was sliding all over the place as the floor was wet," he wrote. "Have some humanity people!"

Speaking to the Evening Standard, Patel explained just how serious the conditions of the terrible journey truly were at the time. "People don't realize how hard Kika has to work- they think, 'Oh, a dog, how cute.' And if she can't concentrate because she can't lie down, then she can't keep me safe," he said.

After the incident, Patel took to Twitter to elaborate on how small the humiliating ordeal made him feel. "People can be so selfish, they pretend they can't see or hear when I ask if there's a seat available," he wrote. "Its so humiliating when I struggle to find something to hold onto & keep Kika safe at the same time, this is when you'll see a tear running down my face. Life is difficult enough."

After Patel shared the specifics of his horrifying train journey on Twitter, followers flooded his feed with empathy and apologies on behalf of their fellow Londoners. "I despair of people," wrote one of Patel's followers. "I truly do. To even have to ask is not right. I hope people from this carriage see this tweet and feel shame."

After some Twitter users criticized Patel for sharing his story and contributing to the narrative that disabled people are helpless, the 37-year-old issued a response of his own. "I don't need or expect a seat every time I travel but in bad conditions or crowded trains I feel safer sat down," said Patel. "I hope the articles at least encourage people to be more aware of those around them."

After Patel's experience went viral, Southeastern issued an official statement regarding the incident. "We would hope that people use their judgement and give up seats to passengers who may have a greater need, and we're sorry to hear that Mr Patel experienced an awkward journey on this occasion," said an official spokesperson. "We’re already rolling out clearer Priority Seat signage on the trains that don’t already have it to make it more visible."

Not The First Time

Unfortunately for Patel, this isn't the first time he's been forced to contend with selfish, inconsiderate passengers on public transportation. Recently, Patel released a video of an irate traveler on the London Underground demanding that he move Kika out of the way while riding an escalator. While Patel admits that the video "got people talking," it's clear that more needs to be done to accommodate disabled travelers.