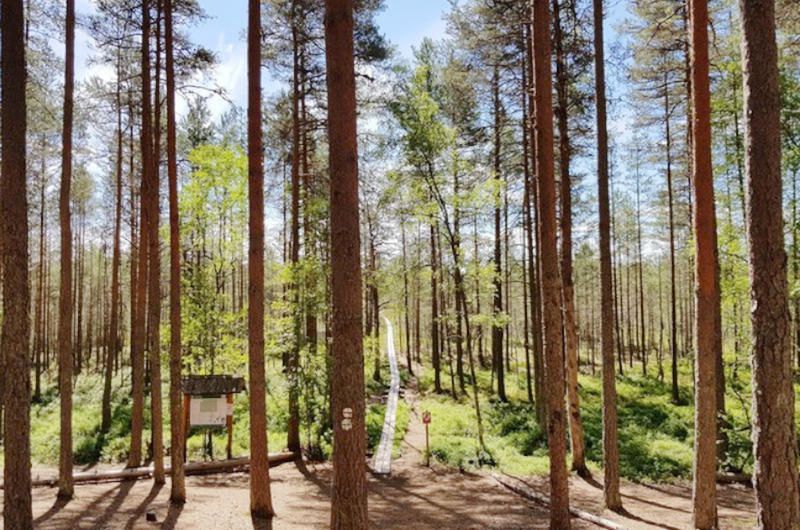 He thought that his eyes were playing tricks on him. What lost treasure from antiquity have I discovered?

After being corroded shut for years, the rusted metal finally scraped open. The aged beauty displayed her prior pride on the inside. The spectators were all in awe as they observed this historic moment.

An Adventure Into The Forest

Kaspar first glanced at the left path, then at the right. One was well-used and well-liked by hikers.

The other path he wanted could hardly be considered a path at all. The Estonian swamp was ready to be explored.  The rich green trees pierced the sky. Lake Kurtna Matasjarv soon came into view.

Markings On The Ground

As he explored the spongy perimeter, he noticed peculiar markings on the uneven ground.

It was apparent that it wasn't like any shape he had seen previously during his many wanderings, even if they were covered with years of growth. He gave it a little nudge with his boot. Then he noticed something else.

A rope? Had a boat sunk there? It wouldn't budge no matter how hard he tried to pull or how much mud he scraped off.

He felt obligated to tell someone about this odd situation. He sprinted home and dragged his bewildered parents out. It didn't take long for word to spread around the community, and a large crowd soon formed.

The men joined to search for hints as to what was supposedly submerged in the lake.

The rope was partially submerged in the mud when one of them noticed it. He placed his hands over it until he could grip it, and then he pulled with all his strength. The slick dirt fell way quickly, but it remained in place. After that, everyone tried pulling.

Nothing. Despite the efforts of over a dozen strong men and women, whatever was on the other side wouldn't come up easily. They spend hours pulling to no avail.

They lacked the required equipment and manpower to solve the mystery. It was time to contact the authorities.

The rumbling of a massive bulldozer soon reverberated throughout the forest. Finally, the support they needed had arrived. They fastened the rope to the enormous machine as the driver prepared himself to drive the vehicle forward.

Furthermore, several folks had the brilliant idea to pitch in and hold a portion of the rope to aid in the haul. Even still, the additional horsepower was insufficient. Whatever it was, it had to be enormous.

Everyone hurried back to their homes to grab their own ropes and haul their own vehicles in.

It took 8 hours of steel cables, shovels, machinery, and human power; even little Kaspar enthusiastically assisted. Like everyone else, he took as many hours as possible to see what his discovery was.

They all felt something suddenly shift as everyone simultaneously pulled. Soon after, the base of an object rose above the water's surface.

People hurried to pull it out of the mud, clearing the area around it with shovels so the bulldozer could draw it out more effortlessly. The mystery "object" finally made itself known.

The sun began to set behind the treeline, and everyone gasped as the creature steadily rolled up and out of the water like an algae-covered monster.

A large open hatch was exposed when some onlookers quickly removed the hardened mud from its surface after recognizing what it was.

Hours had passed since they had partially removed the enormous metal object from the murky water. The men continued to peel the layers of mud as their energy waned while wiping the sweat from their brows and doing so until a startlingly identifiable white symbol was revealed.

They had reached this point because their curiosity had driven them. They were now gearing up for the last push.

With one last mighty pull, it was finally out. Everyone fell silent as they watched the metal behemoth roll out of the lake, squelching and fighting against the heavy mud and streaming torrents of water over the villagers.

None of them could quite believe the piece of history they had resurrected… but what was a war tank doing here?

That was the question on everyone’s mind. What was a WWII war machine doing in a lake in the Estonian swamp... in the middle of nowhere?

Kaspar sprinted up to look inside. This was a once-in-a-lifetime event, and he would not miss it. Through the water, he saw something shiny. “Mom? Are those big bullets?”

Kaspar felt strong arms pulling him off and dragging him away. “Get away from that!” his mom yelled. There was still ammunition rolling around in the cabin.

The tank was in amazing condition … so there was a chance the shells could still be dangerous. It wasn’t long until they heard the wailing of sirens.

A camouflaged truck and men in combat gear rushed out of the armored vehicles and towards the mud-caked tank.

Someone must have called the authorities as soon as they saw what was inside. Everyone stood still and dead quiet, wondering if they were in trouble. One officer came up to Kaspar and asked him a pointed question.

“You found it?” the large man asked. The boy gave a small, scared nod.  The man smiled. “I’m impressed. Well done.” The soldier looked around at the villagers and said, “We need you to step back while we make sure it’s safe.”

And, between the army and internet research, the answers to the mystery finally emerged.

It took two weeks and every available hand to bring the tank completely out of the lake. The team managed to haul the gigantic machine far up the bank enough so people could go around and take a closer look.

Many took photos of and with the major historical find. But how had a Russian-built tank with German markings ended up there?

Experts confirmed that it was indeed a war machine -- a Soviet-built T34/76A, to be precise. This 7-metric-ton vehicle was the prime element in the Soviet army in their battle against the Germans.

Aside from being underwater for an astounding 56 years, they discovered another amazing detail about the symbols and numbers painted on its side.

This particular tank was thought to have been captured by the enemy and repainted with their own symbols.

Even though it was a capable machine that could navigate all kinds of environments, the main theory is that the Germans dumped it so it couldn’t be retaken. The next astounding discovery took place in the Gorodenko museum.

Another curious detail about the tank was that it didn’t seem to have any damage at all. While some of the metal on the surface had eroded slightly from decades of being underwater, the Russian war machine appeared to still be in good condition.

In fact, it was so intact and looked so very solid that they couldn’t help but hope that it still worked.

Experts revealed that the pristine condition that the tank was found in was thanks to the low oxygen levels in the marshy bog area that became its watery grave.

These conditions helped to preserve the metal while minimizing any corrosion. Everything was still intact -- as if the metallic beast had been sunk a year ago. But was it still operational?

During the restoration, curators were amazed when they found that they were able to start the old diesel engine without needing any spare parts at all.

They also recovered a total of 116 pieces of ammunition. And experts were even able to answer the burning question of why the tank was located in that particular area.

The Eastern Estonia Narva front was the location of some intense battles. Around 100,000 soldiers perished, and more than 300,000 were wounded.

The fighting forces migrated, and endless tanks and soldiers poured into the narrow, swampy area. The finale of the battle took place on August 3. Huge quantities of Soviet armor and artillery attacked the German positions, but until August 10, not much had changed.

It was in the summer of 1944 that German troops, during the Battle of the Blue Mountains, captured the Soviet ‘Trophy Tank’.

What makes this find extremely rare is that this tank had to fight for both the Russian and German sides during WWII. However, it was sent to its watery grave just six weeks later.

By August 22, the Red Army had achieved several victories – including taking back the city of Kharkov (now Kharkiv). Meanwhile, the Germans planned a massive defensive wall that stretched from the Sea of Azov in the south to the Gulf of Finland in the North.

Called the “Panther Line,” the defensive wall was meant to be analogous to the Atlantic Wall the Germans were building in Normandy, France. However, it was already the beginning of the end.

The Red Army advanced too quickly for the Germans to build their defensive wall. The Soviets pushed them westward across Ukraine.

On September 19, 1944, the Germans began to retreat along the Narva front line -- and deliberately dumped the tank. The German army wasn’t willing to submit anything and destroyed what they couldn’t use.

The President of Estonia, Lennart Meri, even came to inspect the tank a few days after it was pulled out of the lake – surprised to hear that a priceless artifact had been found by a curious little boy.

The old T-34 was intended to be displayed for everyone to see at a war museum in Gorodenko village as a working exhibit, but there was one problem.

According to Estonian laws, the group that recovered the tank – the Otsing club and museum –  had to wait five years before they could take possession of it.

In 2006, the five-year waiting period had elapsed, and the club became the proud owner of the priceless piece of history. There was just one thing left to do.

The T-34’s restoration began, and its parts and components took a year to be overhauled. In 2007, the work was complete, and the tank sat at the club’s workshop near the village of Sirgala - which is in the woods, halfway between Johvi and Narva - waiting to be reassembled.

The Estonians hoped to have it ready to offer visitors a ride on the fascinating piece of history. However, it is unclear where the tank is today.

The Soviet tank lay forgotten in the lake for decades before being found - if it wasn’t for the curiosity of one boy, it might never have been recovered.

In order to protect the privacy of those depicted, some names, locations, and identifying characteristics have been changed and are products of the author's imagination. Any resemblances to actual events or places or persons, living or dead, are entirely coincidental.