Karla Pavelka
One Man Set Up These Coolers Around His Town and Became a Local Hero November 26, 2019Leave a comment 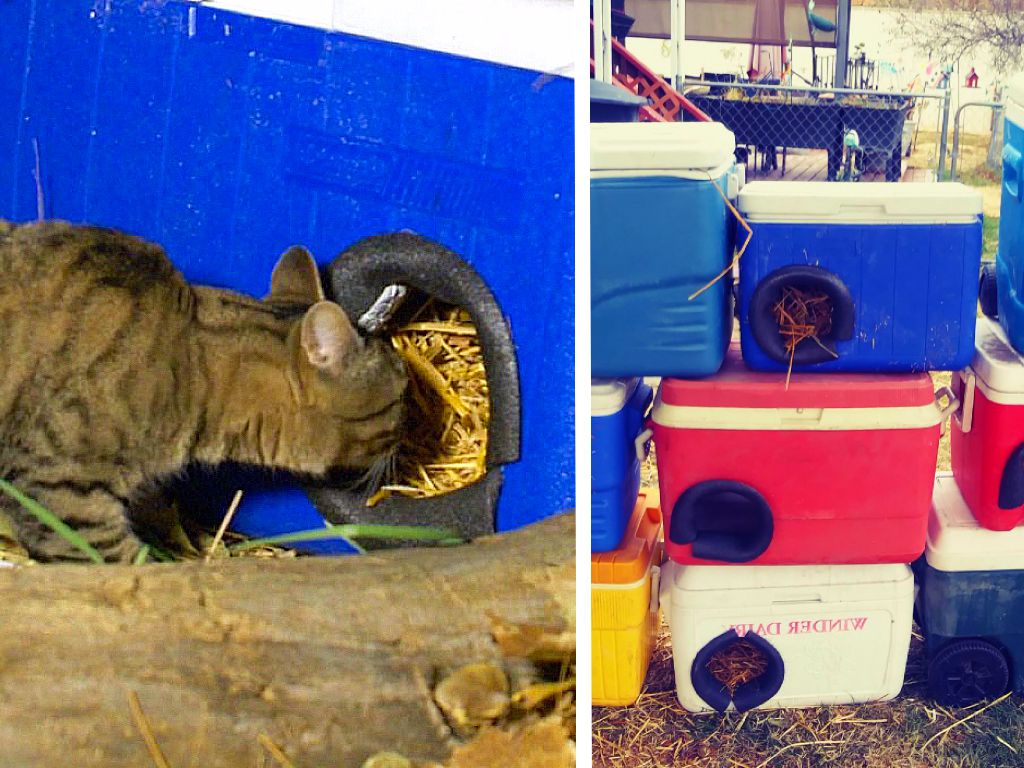 Philip Rogich took a problem into his own hands and vowed to change it. In Utah, where Rogich lives, the average temperature in February is 20° F or lower. And during the cold winter months, many stray animals are in grave danger of being caught out in the cold. Luckily, Rogich used supplies that he had in his garage to help these animals and save some stray cat's lives.

It's estimated that there are 58 million stray cats in America. It is, however, difficult to get an accurate count. That number could be as low as 35 million, or as high as 75 million. The problem, however, isn't just strays.

While some cats can be adopted and given a home, others can't. Feral cats are unsocialized cats. These cats are fearful of humans, and keep their distance. Some can be socialized, but for some feral cats, the more compassionate choice is to leave them outdoors. They do, however, face challenges.

Getting Out from the Cold

One of those problems is the cold. In Ogden, Utah, the average temperature in February is 21.2° F. It can, however, get much colder than that. Temperatures can reach into the negatives. This can make things difficult for the wildlife there.

One man, Philip Rogich, decided to do something about it. Rogich is no stranger to good deeds. He runs a site called "Batman of Ogden," where he does cosplay for various charities. Normally, he works for children's charities, but he also has a soft spot for animals.

Thinking of the Strays

Rogich decided he wanted to do something for the feral cats in his city. His concern was that no one was looking out for them. “[Feral cats] just disappear, get overlooked,” he said. Rogich looked for a solution.

Rogich decided to create a DIY solution. He decided to use a common household item: a cooler. “Normally the cooler keeps things cold. We’re going to use it to keep animals warm,” he said.

Why a cooler? Because they're easy to come by. “Everybody’s got a cooler in their garage that they’re not using,” Rogich says. Not only can you declutter your garage, you can save cats while doing it.

Rogich is turning coolers into shelters for cats. He is placing these cat shelters around the community so that feral cats have a warm place to stay. He wants them to have a refuge from the cold. “They get cold in the wintertime too,” he said.

Why is he doing it? Rogich says he's always been an animal lover. Plus, the coolers would go to waste. Many would end up in landfills. There, they would just take up space when they could be used for a much better purpose.

Starting with a Drill Bit

It all starts with a drill bit. Rogich uses a 6-inch drill bit to drill a hole in the cooler. This is the entrance for the cat. Once a cat enters the cooler, the insulation that would usually be used to keep your drinks cold will now be used to trap the cat's body heat inside the cooler and keep them from the cold.

The last thing Rogich does is fill the coolers with straw. Why straw? "Straw has been used for hundreds of years as bedding for animals," he says. "That’s because it has the ability to dry out.” Not only that, but it acts as more insulation to keep heat inside the cooler.

The project takes about five minutes, total. Drilling through the cooler is an easy job. There is a layer of plastic, then Styrofoam, then plastic. Adding the padding and straw is also very little effort. And other materials can be used depending on what you have around.

Since the project relies on old, unused coolers, on top of taking little time, it's inexpensive as well. The only additional material needed is some pipe insulation. Pipe insulation is only dollars per role. As long as you have a drill bit, the project costs practically nothing! And it could mean the world to an animal in need.

With some simple tweaks, the coolers are totally transformed. Unused coolers go from clutter, to a comfortable home. Who would have thought a cooler could be a home for cats? Talk about upcycling!

It isn't just one cat per cooler. Rogich believes each cooler can house two to three cats. Feral cats socialize with each other and travel in packs, so they're likely to stay together. This makeshift home keeps that in mind and makes it possible for families of cats to stay together.

Local cats are already interested. A few have already made use of the coolers. Rogich hopes more of them will emerge from the bushes. He wants the coolers to be their new home. And if some cats are already using them, they will probably spread the word to other wild cats and ensure a safe home for their peers.

Rogich is spreading the love. And it's not only Ogden he's taking care of. He's placed coolers in the nearby town of Richmond as well. Rogich is looking out for many of the community's felines without needing to take up much space or cost the community any funds.

A Matter of Compassion

For Rogich, his reasoning for doing this is very simple. "They're living creatures," he said. "Living creatures, they deserve to have their basic needs met." For Rogich, it's about compassion for all creatures. That is what inspires all of his charitable endeavors.

It's all about giving these animals a better shot at life. “I’m giving them a second chance, one way or another,” Rogich said. His care for these cats is very apparent. He's trying to do something others aren't doing. Because who would have thought of "cat coolers" before?

Spreading to the Community

Rogich's good deed has started to spread. Others in the community are volunteering to chip in. He's had people offer to donate old coolers. Others have offered to donate straw. When these items are donated, the cost of making these cat coolers is nothing but the few minutes it takes to put them together and set them out in the wild.

Local thrift store Savers has offered to help as well. They have promised a donation to Rogich. At the end of the season, they will give him their old coolers. The whole community is rallying for their local cats.

No Plans to Stop

For Rogich, this is only the beginning. He plans to continue making the coolers. Not just throughout this winter season, but for years to come. He wants this to be an ongoing project.

Rogich is happy to get help from others. You can always donate a cooler. Or, given his other community outreach efforts, there are other ways you can support him. You can contact Rogich via his Facebook page. Do a good deed today!