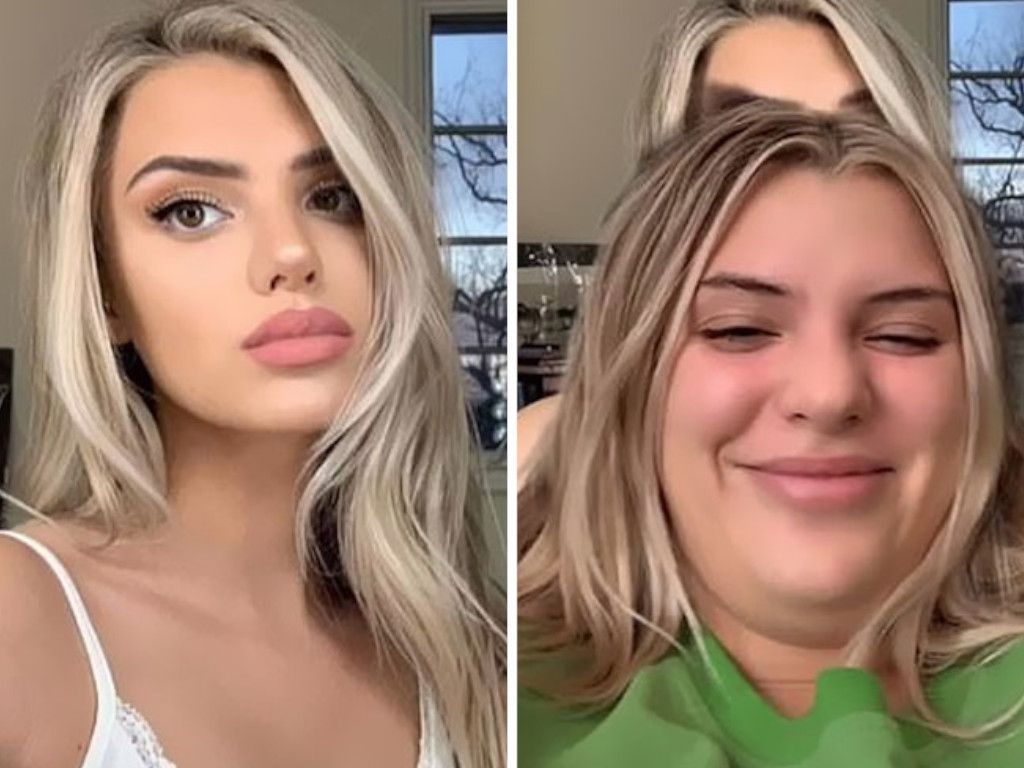 It’s hard to tell if the people we are following on social media really look the way they do given that so many people hide behind filters and makeup. So, a 22-year-old Australian TikToker named @moldogaa started the Catfish Challenge that dares TikTokers to upload a video on the platform that shows their true face behind their seemingly perfect selfies. Did the whole world suddenly wake up looking flawless or is social media lying to us?

The photo on the left could easily pass for Rihanna's doppelganger. But TikToker Euzhany looks completely different when she’s not in full glam, (just like everyone else!) Despite her catfishing abilities, we can all agree Euzhany is just as beautiful in both pics.

No one wakes up with perfect hair and the skin of a golden dewy goddess. That's not the way life works. Fortunately, TikToker Magosslaboss has no issues showing off her true face behind all the glitz and glam.

From Supermodel to Casual Friday

TikToker Lindseyfrencken looks ultra-glamorous on the left, but every once in a while, she loves to let her hair down and walk around the house in just a t-shirt, clean skin, and messy hair. There's nothing more liberating!

This TikToker proved that makeup and angles are a pretty powerful weapon. Anyone can create a picture perfect moment if they know how to pose and style themselves. But while the before and after photos look like two completely different people, this TikToker is a total queen, regardless.

This Creator Totally Earned Their Crown

TikToker Plastique_tiara looks like one of those breathtaking supermodels from the 90s in many of her pics. But as it turns out, behind her beautiful pictures, there's a cheeky man with a great sense of humor that DEFINITELY knows how to rock a dress.

Not a Completely Different Person Altogether

The Catfish Challenge has accrued over 409 million views so far and other TikTokers like Kittynewcomb have jumped on board to show off how truly unrecognizable someone can look without angles and makeup. But while the sultry makeup look on the left is simply amazing; we just love her sense of humor about the whole thing.

She Owns Her Look

Sometimes you need some highlighter to shine a little brighter. But TikToker Yasitskrishy took things to a whole new level with her fabulous glam, complete with chandelier earrings and head accessory. But sometimes, a gal just wants to kick back in nothing but a hoodie and her natural face.

An Angle on Things

We love the way Tik Toker Muawk matched her lip color to her hot pink hair. But in the after photo, she went bare faced and exposed that over half of her eyebrows are shaved off. Not only that, but depending on the angle, she even gets a double chin... just like everyone else. No one is absolutely perfect 24/7 after all, right?

Like most TikTokers, Jord627_ is an absolute beauty, but have you met her doppelganger? This hilarious social media influencer decided to have some fun by showing off her comedic side and letting it all hang out.

Beauty is Beauty No Matter What

With or without makeup, TikToker Alissaviolet looks stunning in both photos, even if she's grinning and making a face. If anything, the photo on the right is better because she’s smiling and laughing her butt off.

Beauty With a Sense of Humor

TikToker Misss.jolie is a total rockstar with or without makeup, but she certainly didn’t want to feel left out for this challenge. So, in her after photo, she allowed followers to know just how "ugly" things can get in real life. Joke's on her because even her "natural" pic is adorable!

With and Without Blue Contacts

TikToker Waifubarbz is brave, kind, and colorful, too. But as it turns out, they can also look like a total bombshell as seen in the photo on the left. But the photo of their male counterpart on the right looks absolutely adorbs, even if they look nothing like their full glam version.

TikToker Gershona looks simply incredible. Her hair is to die for, particularly the volume and shine. But as it turns out, Gershona is wearing a a wig. So, to poke fun at the shocking revelation, she showed herself wigging out. Still reigning queen supreme, what can we say!

The Truth is Out There

Will the real TikToker Mizznofilter please stand up? Alright so the photo on the left shows us what the power of makeup, contouring, and filters can do for a person. But Mizznofilter had no issues showing us her makeup-free look.

Today’s beauty standards are a bit ridiculous. Let's be honest. If this challenge has proven anything, it’s that baring our true face is the ultimate form of self-expression, much like TikToker Glamzillaxo discovered when she decided to reveal her makeup-free realness. What a queen!

When TikToker Theamandashow_xx first heard of the Catfishing Challenge, she knew she had to participate. So, she shared her before photo where she looks all glammed up, and her after pic which has her looking extra jolly, with glasses and her hair tied back.

Looking Funky Fresh All the Time

TikToker Phungkyfreshq looks like the kind of gal that’s ready to conquer the world. But the image on the right proves that everyone needs to let it all hang out from time to time. If anything, her true beauty is still shining.

We See Her True Colors

British TikToker Steph_2914 shared her beauty look which is anything but casual. In fact, she looks downright gorge! But most of her followers were a tad shocked by her makeup free selfie. We're loving the honesty!

Not Much of a Difference

Some TikTokers have proven that their makeup and no-makeup photos make them look like two different people. But TikToker Moldogaa doesn’t look that different without makeup except perhaps, the lack of digital cherries on her cheeks.

Pretty No Matter What

If there’s one that TikToker Mchammr has proven is that while makeup is cool and all, sometimes we need to let our pores breathe a little. But while some influencers would rather drown in foundation and setting spray, it’s totally fine to let all our beautiful imperfections shine through.

Giggling Over the Difference

TikTokers like Gracecottxox can look so different on social media that when you pass them on the street in real life, you wouldn't be able to recognize them...which is actually kinda cool if you like keeping to yourself.

Pulling Off the Thumb Trick

Social media influencers pull all kinds of tricks to hide certain things they may perceive as flaws. Just ask TikToker Baaobrat who pulled her double chin back by pressing her thump up under her chin. And while she ditched her foundation in the photo on the right, her confidence remains FLAWLESS.

Shocked by the Glamour

This TikToker looks almost shocked by her glamorous self on the left. Oh sure! Wearing long lashes, lipstick, and looking like an Egyptian goddess is great, but going bare faced is way more liberating.

She Loves to Get Fancied Up

On the left, TikToker Itsagirlshaeee looks flawless with her voluminous lion mane. But in her bare photo, she traded her pouty lips for a big old smile. And while there’s nothing wrong with being yourself, sometimes it’s okay to dress up and shine even brighter.

This woman might not resemble herself at all times, but that may be because her fake lashes totally change how her face looks. That along with the camera angles of the glamorous photo lead to some really amazing results that any makeup artist would swoon over.

My Lip Gloss is Poppin’

Wearing big lashes and huge hoop earrings can change the proportions of your face in incredible ways. By adding these big details, other parts of your face, like your eyes and nose, will look smaller. So, when you take them off you may be surprised.

Learning how to do your eyebrows is a very impressive skill. Those feathered edges and crisp lines just aren’t natural, but they’re gorgeous either way. Foundation and a hair straightener can complete the look, which is completely different than her look on the right.

Some people really like to prove the fact that people could not recognize that Clark Kent was Superman and this girl proves it too! Just by taking off her glasses and putting on a little foundation and eye makeup, she practically becomes a new person!

New iPhone 11’s have three lenses on their cameras, so they can pick up even the smallest of details. This girl may have done an incredible winged eyeliner look and devastating red lip on the right, but she can’t deny that her skin still looks pretty flawless without any makeup on at all.

Men can also master the art of doing their hair and makeup to look like world famous celebrities! This guy went from looking average to looking like some of the most famous people in the world, K-pop stars! He looks like any member of BTS to someone who isn’t familiar with the band!

RuPaul was one of the first drag queens to gain mainstream popularity, but there are a ton of other queens who slay their looks on a daily basis. This drag queen put on an outfit that would make Lady Gaga jealous and absolutely killed their makeup look!

Eye makeup can change someone’s entire face! This woman didn’t overdraw her lips or contour her nose, but the way that she filled in her eyebrows and added fake lashes to her lids completely change the way she looks.

On the left, this woman looks absolutely radiant and glowing. With her light lighter, lip gloss and bright eyes, she’s practically emanating light. But on the right she’s obvious in worse lighting, which accentuates different parts of her face.

This girl was probably wearing minimal makeup in the photo on the left, but it’s obvious that she’s still pretty gorgeous on the right too. Camera angles can completely change how your face looks, which is all that’s to blame for this catfish.

The Glamour Queen Has Arrived

This woman reveals why some people have trouble matching their foundation shade to their skin excellently. In the before photo, her face is paler than her neck, so her foundation does an excellent job of evening out the color and making her whole look cohesive.

No one looks their best flaunting wet hair and sweatpants, and this woman shows that the only thing most people need to look a bit cuter is a nice top and some eye makeup. A little blush and highlighter won’t hurt either.

The e-girl look is very popular online right now and it can be achieved with some dramatic eye makeup, cute colors and accessories and an out-of-this-world hair color. Jake here has obviously mastered the art of transforming into an e-girl!

Sometimes a transformation doesn’t have to be dramatic. Just clearing up some blemishes and adding a little bit of lip gloss and foundation to your face can turn some heads too. It’s always helpful to brush your hair in the morning, but who has time for that?