Camila Villafane
This High School Student Made Her Own Prom Dress From Scratch and Left Her Classmates Stunned April 11, 2020Leave a comment 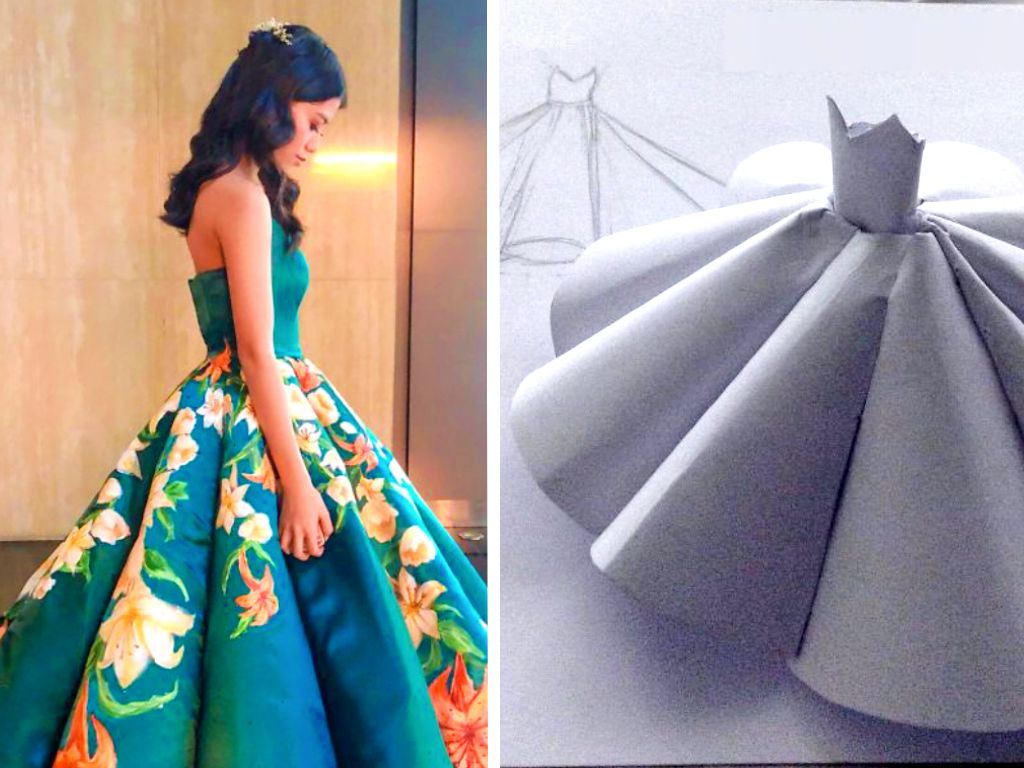 17-year-old Ciara Gan from the Philippines was in quite a pickle. She needed a gown for the prom, but didn’t have one. Then, inspiration struck, and she combined her love for arts and crafts with her eye for fashion to create her very own graduation ball dress, and netizens went crazy over it!

Everyone Has Expectations About Prom

There’s one thing that hasn’t changed since the first senior prom ever, and that’s everyone’s expectations. Students want their prom to be the most memorable event of their lives, and 17-year-old Ciara Gan was no exception.

She Asked for Help With Her Prom Dress

Going to prom is expensive. There are tons of things like limos, corsages, and the oh-so-important prom dress that are just so pricey. But Gan, who lives in Taguig City in the Philippines, wanted her big night to be perfect. So she turned to a seamstress to design a dress for her in January 2019. But then, she wished she hadn’t.

Gan and her mother Maricel reached out to someone to make the gown for her, but the dress didn’t turn out the way either of them had envisioned it. So, they decided to try a different approach that would end up making Gan internet famous.

They Decided to Do It Themselves

Instead of hiring someone else to make her gown, Gan and her mother decided to do it themselves. They started from scratch and had their work cut out for them. But it wasn’t the first time Gan had worked on a prom dress.

She Had Attempted a Sewing Project Before

Gan had tried her hand on another sewing project during her junior year. “The last time was prom during my junior year, where I had to redo my dress’s whole skirt in two days and stick over 200 crystals on it!” she told TODAY. But her senior prom dress was a bigger project and although she had more time to make it, it was still a major undertaking.

They Sewed Each Panel of the Skirt

“For the whole of March, my mom and I made (and) sewed each panel of the skirt one by one,” Gan told TODAY Style via email. But that was just a fraction of what they had they do.

They Had to Keep the Dress in Shape

The young aspiring designer used 13 yards of emerald satin fabric to make the gown, but she used other materials like crinoline and rigilene boning to maintain the shape of the dress, and that wasn’t even the hardest part.

The Dress Had to Represent Her Personality

Once the dress was done, Gan used her artistic talent to give the gown a look that would represent her personality. Unfortunately, she was missing one important ingredient, and she had to find a substitute right away.

She Was Missing Something Important

Gan didn’t have any fabric paint so she had to paint the flowers on her gown by hand using acrylic paints. This took her five days to complete, but she didn’t choose the flowers at random. She wanted her gown to be extra special...

Gan got the idea to paint orange flowers on her dress from the book “Tiger Lilly” by Jodi Lynn Anderson. “I strayed away from basic roses and dainty florals because although they’re pretty, they don’t reflect my personality," she told Buzzfeed News. “I love the vibrancy of loud colors like orange and green—they speak more about who I am.” But that wasn’t the only thing she did to add some pizazz to her dress.

She Embellished Her Dress With Crystals

As a senior, Gan knew that this was her last prom ever and she needed to make an impression. So, she decorated her dress with Swarovski crystals. By the time it was all set and done, she had a dress that would become the talk of the town.

It Was a Month-Long Project

“It took me about a whole month to make the whole thing,” Gan told TODAY Style. This included the time she spent designing it, too. But it was more than just a prom dress to her. It held a special meaning.

“My dress tells a very personal story about the things I hold close to my heart — lilies, the color green, painting, and creating new things,” she added. But there was a very magical reason she chose green for her prom dress.

The Color Reflects Her Love for Potter

"As nerdy as it may sound, I chose emerald green because I’m an avid Potterhead and a proud Slytherin," she told Buzzfeed News. But she didn’t need Dumbledore to teach her how to sew.

When INSIDER asked Gan how she learned to design a dress, she replied, "YouTube tutorials. I would watch videos on dress-making and sewing!" But when she shared how she made her prom dress on Twitter, the post went viral.

On April 8, 2019, Gan posted a couple of photos of her prom dress and wrote, "I painted over 80 flowers, sewed, and stoned my dress with my mama and designed the whole thing myself." And just like that, she received over 380,000 likes and over 81,000 retweets. But she couldn’t have done any of it without the help of someone special.

Her Mom Is Her Best Friend

Getting to wear one of her own creations was definitely a plus, but working on the dress with her mother was the real treat. “My mom and I are best friends. We work on DIY projects together all the time,” she told TODAY. “Just seeing how supportive my mom is fills me with gratitude.” Her classmates were pretty blown away, too.

Gan Had Kept the Project a Secret

Gan didn’t tell any of her classmates that she was making her own dress right away. So, they were very impressed by how amazing she looked when she showed up to prom in her self-made gown. She even knocked the socks off of one particular classmate.

Her Classmate Did a Double Take

"When I first showed up at the event place, my one classmate took a double take to make sure what he was seeing was right! He told me, 'I thought it was printed!'" she told Buzzfeed News. And now everyone’s asking to see more of her talent.

People Are Requesting Her Art

The attention Gan received has opened the door for other art projects. In fact, she’s gotten a ton of requests for purchasing her artwork, which has really touched her heart. She’s grateful for all the people who appreciate her talent, and she’s open to taking on other projects.

She Advertised Her Artistic Skills

Gan really needed the money for her summer after graduation, so she accepted various art projects in exchange for a commission. She also posted tweets where she advertised her skills as an artist and as a designer. Then she had the opportunity to make another dress, but not for herself.

She Painted Another Dress

Gan was commissioned by someone all the way in Hong Kong to hand-paint a wedding gown the same way she did her prom dress. The only difference was that this dress was red instead of green. But her old dress was pretty famous, too.

The Prom Dress Was a Major Event

Gan’s prom dress was put up for display at Aspace’s May Day event in 2019 in Makati, Philippines, and remained there until June 14 of that year. In this brief period, people got to see the dress up close and personal, and were convinced that this was only the beginning for Gan.

They Were Certain She Would Major in Fashion

People were so impressed with Gan’s dress that they were certain that she was going to have a career in fashion and bring her unique talent to the fashion industry. But when they asked her if that was the plan, she gave them a response that left them stunned.

She Wants to Bring Science and Art Together

"I plan to pursue a degree in a science-related course," she told INSIDER. "I am in love with both the arts and sciences and I want to incorporate the two different things with each other. I want to bring art into science, or vice versa." Whatever she comes up with next will undoubtedly be as spectacular as her prom gown.