Camila Villafane
Watch This Guy Clean and Restore the Most Rank Jordans You’ve Ever Seen May 20, 2019Leave a comment 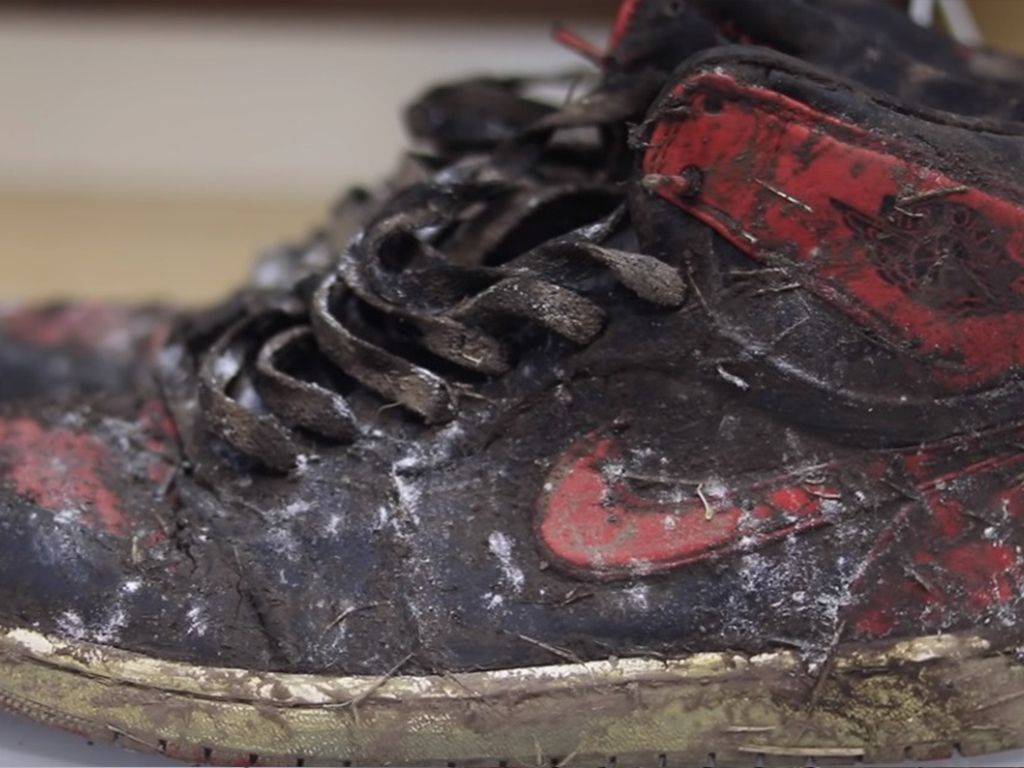 Most people don’t have a clue how to clean their sneakers properly. But John Manalo, YouTube’s vintage sneaker restorer, does. He’s like the Harry Potter of sneakers. Just look at what he did to fix a "ruined" pair of Air Jordans that were headed for the dumpster...

John Manalo is like the necromancer of shoes. A lot of his clients’ kicks look like they’ve been dug out of a grave. But instead of letting them rest in pieces, he uses his impressive skills to bring sneakers back to life...

He Can Rebuild It

It sounds like science fiction, but Manalo can rebuild any sneakers, no matter how scruffy they may look. With patience and dedication, he can remove even the most challenging dirt from a sneakers’ uppers and restore their original color. But how does he do it?

You Have to See It to Believe It

Manalo's YouTube channel shows his techniques, like when he restored a pair of $1,200 Air Jordan Banned 1s. Anyone can see from a mile away that these shoes look like they were at ground zero of a nuclear bomb...

These kicks were caked in dried-up mud. Even the laces were muddy. You could barely see the signature red check mark on the sides. And something tells us Michael Jordan would have a stroke if he saw their condition...

The shoes were heavily soiled in mold, dirt and grime. Now most of us would have taken one look at these, thrown them in the trash and never looked back. But John Manalo is a freaking wizard at sneaker restoration. And, let's face it, he obviously gets a kick out of rebuilding and upcycling things.

Manalo has been cleaning sneakers since 2011. And you may be wondering where he gets all those jacked-up sneakers from. But Manalo claims on his channel that his sources are his secret to keep...

He Only Does Celebs

Although he has given countless sneakers a second chance at life, he’s currently only accepting work from celebrity clients who undoubtedly paid a lot of money to have Manolo give their kicks a fresh, clean look.

To get the 2011 Banned 1’s cleaned, he started by dumping them in a bucket full of soap and water. From there, he scrubbed the insides and the outsides to ensure each sneaker got a deep clean, which they desperately needed. But he gave his followers a warning...

If you use dish soap to clean your leather shoes multiple times, it will eventually dry out the material. So, make sure to be careful or better yet, leave it to a professional like Manalo, who’s a total sole master.

Manalo also used the soles from other kicks to replace the original soles because these have better treads. But he modified the donated sole so it would match the upper part of the shoe as perfectly as the original. He still had more prepping to do before he married the uppers to the soles....

He used a Dremel tool on the interior edge of the sole to remove the factory adhesive so when he used his glue, there wouldn’t be any separations. But this was just one of the steps he used to make the shoes look new again. He still had a long way to go...

Since the donor soles were gently worn and the toe box was missing, Manalo used Retrobright on the rubber to help the shoes look just as new as the day they were bought. Now he just had to turn the soles white as snow again...

To avoid turning the soles yellow and ruining the traction, he mixed a concoction of 3% hydrogen peroxide (anything above that would have damaged the soles), some OxiClean and flour. But he had to shield the leather for this next step...

Manalo removed the factory glue on the uppers just like he did with the soles, but he was careful to protect the leather with tape. Then he used the Dremel tool once again to remove the factory glue. But what about all the scuffs?

You can tell these shoes were heavily worn because of all the scuffs on the upper leather material where you don’t see damage unless the owner used the shoes a lot. There was discoloration on the ankles’ collar around the heel and everywhere else in between, which is why this next step was important...

Manalo had to repaint the upper material of the kicks, but first, he had to use acetone to remove the factory varnish that protects the leather paint. This would ensure his paint job will adhere properly onto the leather and flex with the shoe without flaking off.

He used a cotton ball to pass the acetone throughout the shoes, but was careful to avoid the wings logo since he admittedly wasn’t savvy enough to recreate the design if it got damaged. Then the paint job began!

He repainted every part of the leather that was too discolored. By adding fresh black paint, the whole shoe looked entirely refreshed. It also helped remove any of the red overspray.

When he looked at the interior of the upper, he saw the rip on the sock liner, which he fixed with a patch for heels. This would also make the shoe more comfortable to wear. But he still had to put the show back together...

He sewed the shoes up and made it close tight. Once it was all stitched up, he applied Super Stick onto the patch. Then he patched the shoes where the hole used to be, so it would hide all of the flaws from the stitching.

All that was left to do was bonding the uppers of the midsole. To do this, he applied the adhesive on to the midsole and uppers and allowed the shoes to cure for a few hours. Then he heated them up, glued them and used a sewing awl to finish putting the shoe back together.

Although the insoles were better off being burned, John wanted to keep them to ensure the kicks remained as OG as possible. To do this, he tried a nifty little trick no one saw coming...

Baby, You Got a Stew Going

After the insoles dried up, he sprayed Lysol to disinfect them, which also undoubtedly got rid of the stench of stinky feet that made the insoles smell like bleu cheese that’s been left out on a windowsill.

He Added the Finishing Touch

Since Manalo used dish soap to clean the exterior of the shoe’s leather, this made the leather dry. He used mink oil wax to moisturize the leather and make it supple again. This invigorated the leather, and if we’re being honest, the shoes could pass as brand new.

Ta-da! Who'd believe that the two pairs of sneakers seen here are the same pair? It just goes to show you what a little know-how and elbow grease can do.

Watch the entire video to see Manolo's process from beginning to end.