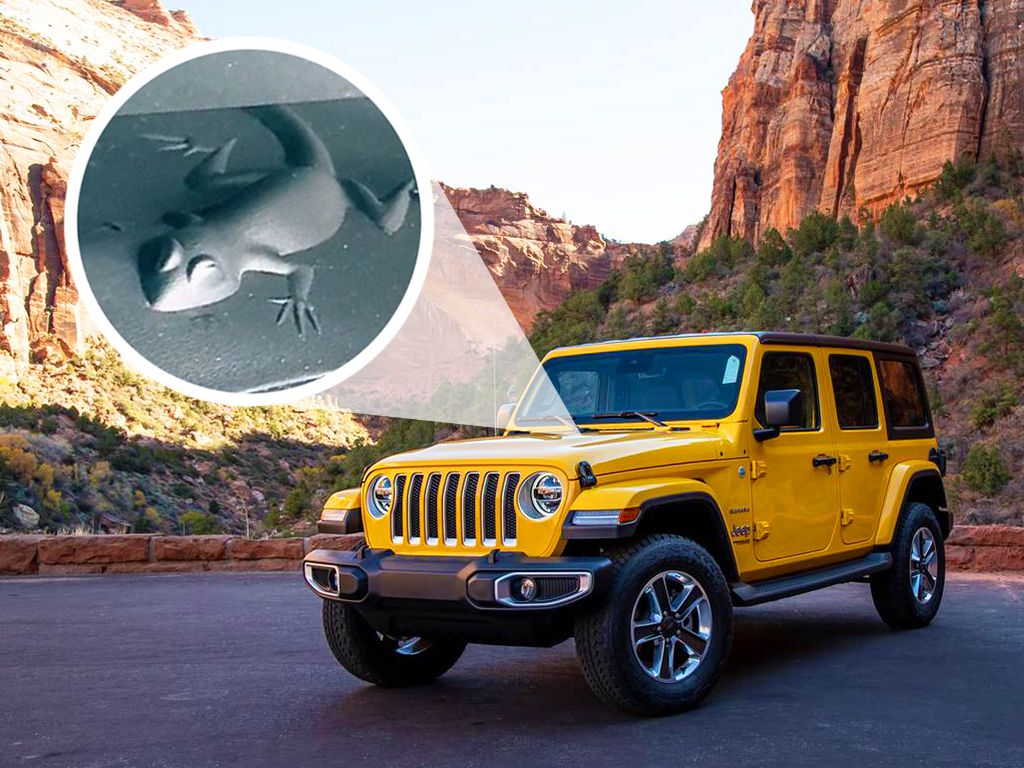 The term "Easter egg" is often used to describe a hidden feature in a video game, film, or television show. And as it turns out, there are a ton of Easter eggs hidden in Jeeps and this has been happening since 1997 thanks to automotive designer Michael Santoro who wanted to enhance the Jeep Wrangler.

So, we’ve compiled a list of the coolest hidden secrets found so far. There are also some other car models from major companies that include hidden and inventive secrets that provide useful functions as well.

The Wrangler Has Morse Code

On the dashboard of the Jeep Wrangler there is a logo that reads JL. But on the L there are a series of rectangular dots, and that’s not random. Those dots are actually Morse code that represent “JL.”

The T-Rex's a Floor Mat

There’s a Jurassic discovery underneath some Jeep owners’ feet. It’s a T-Rex which has been etched into the floor mat. But only a lucky few will encounter one of these dinosaur skulls if they bother to clean their mat.

The Jeep has been and will always be made in America and anyone looking for further proof of just how American this car is should look at the C-pillar vent which looks awfully similar to the American flag.

There’s a Jeep on the Wheels

Most people don’t notice it but there’s an old Willys Jeep figure embedded on the wheel’s hubcaps. It’s not exactly inconspicuous. Then again, most car owners never bother to inspect their wheels up close and personally unless they're checking for tire damage.

There’s a Lizard Under the Wipers

If there’s one thing that Jeeps and lizards have in common it is that they both do well in desert conditions and tough terrain, which is why the designers added a lizard under the windshield wipers.

This Jeep Has a Built-In Map

Most Jeep owners would totally dismiss this as a design flaw during the molding of the center console. But right above the gear shifter is a topographical map of Moab, Utah, the Jeep’s ultimate off-road trail.

The Jeep Has a Secret Project

On the bottom of the center console of the Jeep is an etch of a box with the grills of a truck and the word “PROJECT” right below it. But Jeep has never revealed what this represents or even given car owners a hint to its origin.

The Wipers are Twinning the Headlights

When automotive designer Michael Santoro started his tradition of adding Easter eggs to Jeeps, he started with the 1997 Wrangler and further inspection of the seven-bar grille reveal that the wipers are nearly identical to the vehicle’s headlights.

There’s a Jeep in the Jeep

Over the years, designers have added even more hidden gems in the vehicles that are hiding in plain sight, like this miniature vintage Willys Jeep on the corner of the windshield.

The One With a Pair of Flip-Flops

Rick Pewe is an automotive journalist, editor and photographer who loves to wear flip-flops while out on the trails. So, to honor him, a tiny pair of flip-flops were imprinted on the Jeep Gladiator’s cowl.

There’s a T-Rex and a Big Foot

What are the odds of finding a T-Rex and Big Foot in one place? Well, some Jeeps have a T-Rex running after a Willys Jeep while Big Foot approaches the vehicle from the other side.

There’s a Well-Wishing Message in the Renegade

The reason so many drivers love their Jeep is because it gives them the ability to go out and explore off-road terrains that aren’t easy to traverse with a conventional vehicle. And that’s why the designers added the phrase “To New Adventures” in their 2019 version of the Jeep Renegade’s start/stop engine button.

The Front End Grill Is on the Rear

Another front end grill can be found on the bottom of this Jeep’s rear door and this has started to become somewhat of a pattern. But it’s not really a coincidence. The car designers intended the grill to appear in more than one place.

There’s Paint Splatter on the Odometer

Jeep Renegade owners will notice a paint splatter on the redline of the odometer but this isn't a design flaw. It was placed there intentionally to pay homage to the paint splatter left behind on the goggles of the vice president of interior designs during a company paintball event.

The Rear View Mirror Has a Front End Grill

While some Easter Eggs aren’t always available in every model, most Jeeps have a front end grill directly above the rear view mirror. But a lot of drivers just dismiss it as something random in the vehicle’s interior design.

Even This Speaker Has a Front End Grill

On this Renegade Jeep’s speaker shroud is an Easter Egg that everyone should be familiar with by now. That’s right! It’s another front end grill of a Jeep. The designers are clearly quite proud of their grill.

This Front End Grill is Clearly There

The designer must have gotten a kick out of finding new places to hide their front end grill but this one’s not so easy to spot and yet it’s right there on the clear lens at the center of this taillight.

And There’s One in the Headlight, Too

Santoro wasn’t kidding when he said he wanted to “make the thing more Jeep,” and that’s exactly what he did. But did he really have to add so many front end grills like the one in this headlight?

There’s a Loch Ness Monster in the Rear Window

Designers placed a Loch Ness Monster on the rear window of the Jeep Compass and with good reason. According to legend, the creature lurks in lakes and rivers which is symbolic of the Jeep Compass’ ability to cross through 19 inches of water.

In the rear of most Jeep Gladiator trucks are a heart and the numbers 419, which is a very special number because it happens to be the area code used in Toledo, Ohio, the Jeep’s hometown.

There’s a Willys Jeep on the Roof Latch

There’s an old Willys Jeep on the bottom of the handle of the roof latch on some Jeeps. While it may not be an epic discovery, it’s still kind of cool how the designers snuck so many little design secrets in their vehicles.

There’s a Front End Grill on the Drive Shaft

Designers printed a front end grill on a Jeep Wrangler’s drive shaft. But most drivers would have to be mechanics or at the very least pop open the hood of the car and take a look inside the engine to find it.

There’s a Spider on the Renegade

The Renegade Jeep may not be an arachnophobe’s best friend because of this particular Easter Egg. It’s a spider lurking in the corner of the vehicle’s fuel door. But don’t worry. It’s utterly harmless.

The spider by the fuel door has a talking bubble that says “Ciao Baby!” This informal greeting is Italian and is used to say hi and bye. And the reason it was used here is because the people who built the car are Italian-Americans.

The Front End Grill is Everywhere

By now, we all know that the car designers have incorporated various versions of the front end grill of the Jeep throughout the vehicle, which is why it should come as no surprise that there’s a grill design on the bed of the Gladiator Jeep.

Jeeps aren’t the only cars with hidden secrets in their interior design. This Easter egg of a shark was found in a Vauxhall Corsa, and it appears in all of the 2006 to 2014 models. It was put there because a designer dared one of his co-workers to hide a shark in the car during production.

The Hyundai Genesis has a truly luxurious hidden feature. As the driver approaches the driver’s side door of the car, the side view mirrors rotate and light up to display the Genesis logo on the ground at the driver’s feet.

Eagle-eyed car aficionados can probably spot this hidden Easter egg with no problem. The lines of the body of the Z4 create a Z just above the windshield on the body of the car. Can you spot it?

Hidden by the fuel cap on the Skoda Octavia is a handy ice scraper, which anyone who lives in colder climates knows can really come in handy. The small square tool is less of a design feature and more of a free gift that comes with the car.

The pedals in the Renault Twingo RS come with helpful etchings that might look familiar to you. They don’t have any special features, but this might help young drivers who are technologically inclined learn to drive more easily.

Chrysler operates out of Detroit, so it’s no wonder why they incorporated the city’s skyline onto the floor mats of their Chrysler 200 models. But, they did erase their competition’s building, the GM Renaissance Center, from the skyline.

The Volkswagen Golf and Passat CC models come with an incredible feature. The rear camera that helps drivers parallel park with ease is hidden beneath the logo on the back of the car. Not only does this keep the camera safe from dust and debris, it also makes the driver feel like James Bond.

The Dodge Viper SRT has a small hidden race track outline just above the window controls. It may be a small Easter egg, but the outline of the Nürburgring Nordschleife race track will impress diehard racing fans.

The Volvo XC90 includes this fun image hidden beneath the lids of its storage bins. And the funniest fact about it is that Volvo’s CEO had no idea about the hidden artwork until after the model was on the market.

Skoda’s hidden ice scraper isn’t the only functional tool hiding in their cars. The Superb model comes with a tool for all climates, a full-sized umbrella built into the back seat and easily accessible from the back door of the car.

Key fobs come in all different shapes and sizes, but none of them are very creative or inspiring to look at. That is, until Tesla once again broke the mold and unveiled their car-shaped key fob for the Model S. And they’re not the only ones to offer car-shaped fobs, Porsche also created some based on their cars.

The interior of the doors of the Fiat Panda have repeating text that spell the word panda in every direction. The text creates a cool texture on the interior of the car and adds a modern feel to the compact vehicle.

Not only does the Chrysler Pacifica come with an area to store an umbrella so you won’t get the interior of your car wet, but the holder has a unique design on it that will remind you of sunny days and brighter weather.

The seat belts in the Volvo XC90 commemorate the year that three-point seat belts were added to their cars, which was the year 1959. This change in design revolutionized automobile safety, so it’s a good thing to celebrate!

Tesla is famous for their Easter eggs, and this one is something that no other car can compete with. When a driver holds down the T button in their Tesla, they can enter holiday mode, which will start a light show done by the car itself.