Camila Villafane
25 Hilarious Online Shopping Fails That Will Make You Double Check The Description Before You Buy April 11, 2020Leave a comment 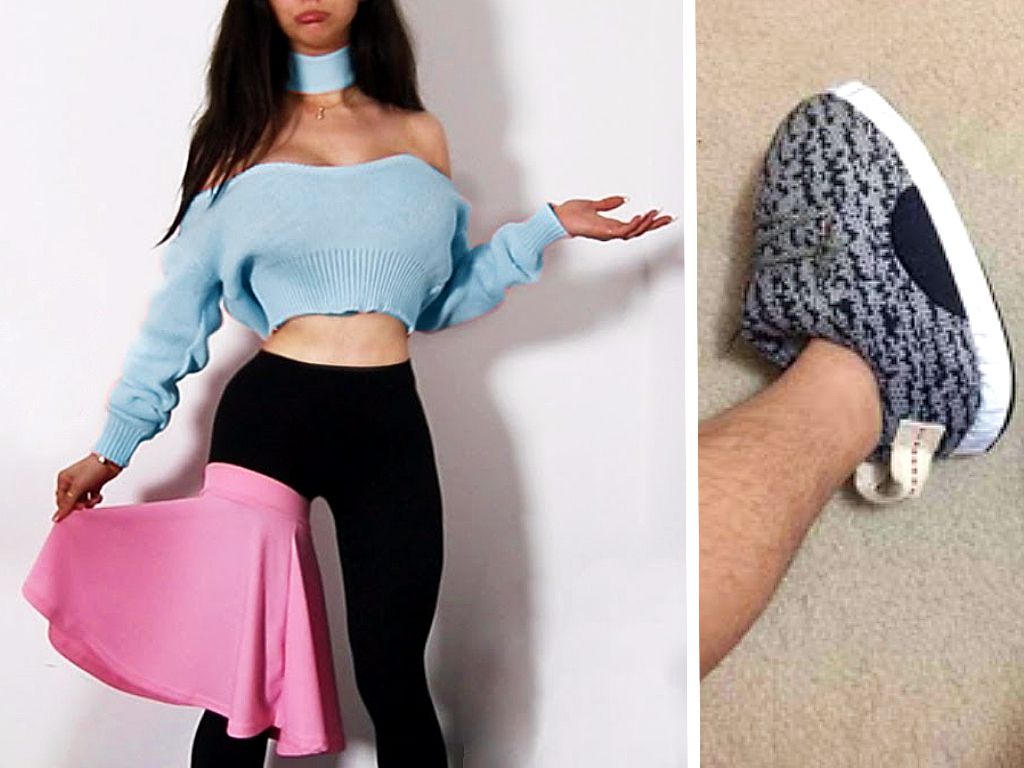 Life is full of disappointments, but shopping shouldn't be among them. Unfortunately for these online shoppers, they got a little trigger happy with their mouse before they noticed the specifications of the items they were ordering and they lived to regret it. So, here are some shopping fails that will make you think twice before shopping without reading the description twice ever again.

She Got a One-Legged Skirt

That velvet skirt would have looked lovely around her waist. Unfortunately, what this online shopper got is only big enough to fit around one thigh, and it's not even the right color. What is she supposed to do with that? Dust the coffee table? Some items look better on a model or a hanger, which this next shopper totally understands.

He Bought an Ill-Fitting Jacket

He saw this Earth-tone jacket online and ordered it immediately. But his expectations were destroyed when he tried it on and realized that the fit was seriously awful. And to add insult to injury, it wasn’t even the right color. But could he have used this next item to scoop up all his tears?

This Ladle Was Super-Sized

Clearly, online shoppers need to be careful about ordering things that appear to be regular-sized. This shopper became the proud owner of this ginormous ladle fit for a giant. While some sizes may be larger than shown on the website, others aren’t large enough, as one camper discovered.

This Tent Was Really Tiny

This shopper was out on a camping trip and ready to turn in for the night. But there was a big problem... minus the big. The tent he bought could barely hold a pet let alone a grown man. This next shopper also got something that was a few sizes too small, but her kitchen tool was almost microscopic!

Did this online shopper order this wooden cutting board from the Barbie collection accessories? It can do pretty much anything that a real-life cutting board can do, except the shopper would have to be the size of a mouse to use it. Either people are not paying attention when they buy things online or sellers are nonchalantly scamming everyone globally. But if you thought this was bad, wait until you see where this next shopper had to shove her hands to stay warm.

This Sweater Was a Hands-On Fail

She wanted a sweater with a hoodie and mittens all in one. But the built-in mittens weren’t on her stomach. They were on her chest. Not only was the design a total fail, but she couldn't even fit her hands in the mitten holes. But that’s nothing compared to this next purchase that ruined “The Lion King” for all of us.

This Flowery Lion Was D.O.A.

You try and do something nice for someone, like order flowers in the shape of a lion, and this is what happens! It looks like the Lion King was just savagely ravaged and then placed on a planter and left on someone's desk. What could be worse? Well, how about some Toe Tights? Check out the next item to see what we're talking about.

He Ended Up With Some Toe Tights

This guy bought a pair of skintight leather leggings that would've looked great with a fitted jacket. But he had no idea that the tights were this tiny. Luckily for this poor online shopper, he found a way to use them anyway and turned them into toe tights! But that wasn’t the last time an online shopper learned to check the measurements before clicking "buy."

Always check the dimensions of an item in the description area before placing it in the cart. Otherwise, you might end up with a grumpy cat when you receive a scratching post that only a mouse could play with. And if anyone can understand what a bad fit looks like, it’s this next guy.

This proud Canadian ordered himself a polo shirt that displayed his country’s flag, complete with maple leaf and all. But when he put the shirt on, it was so small that his belly was hanging out and the maple leaf was askew. His shirt didn’t blend the best of both worlds like this next shopping fail.

This online shopper realized way too late that his "I Love London" t-shirt had an image of the Eiffel Tower, which is in France. At the very least, he should have gotten an image of Big Ben. Hey! At least you can wear it ironically! Clearly, this shopper got played. But not as much as this next gamer.

This gamer was inconsolable after he realized that the PlayStation 2 game console he ordered was a non-functional miniature version of the real thing. But the cat was literally out of the bag for this next purchase.

This Converse rucksack would be perfect if it had been the cat that was going to school. But Danny Mellor’s mom ordered this for his nephew and unfortunately, the kitty-sized book bag wasn't big enough to stick pens and pencils in it. But what could be worse? How about what one dog owner bought their pet?

A Doggie Sweater You Can Wear as a Scarf

This dog’s owner bought a doggie sweater online to keep their beloved best friend warm during winter. But this jacket wasn’t suited for his size. Hey! At least the purchaser bought something that was on par with what they wanted. Now imagine ordering makeup and getting something that scares the living daylights out of you!

Jenna Hutson ordered makeup online, and what she got left her shook... for all the wrong reasons! Instead of getting a makeup palette, she found something that looked like an embalmed chipmunk action figure trapped inside some sort of egg. Upon closer inspection, it appears that the toy trapped inside is the character Chase from the Nickelodeon children's show "PAW Patrol," complete with his police uniform and hat. But, that doesn't explain why he is stuck in a sparkly orb!

This customer spent $750 on what he thought was a pair of Adidas Yeezys. But what he got looked more like the type of bed slippers you'd slip into during winter. And if you thought this was crazy, this next purchase will have you saying, “What is going on?”

She Got a Vampire Carrot

A shopper named Brittany ordered these stuffed carrots for her baby, Emma, because she despised eating vegetables. But what she got in the mail was a real carrot with a face and vampire-like fangs drawn on it with permanent marker. Clearly, the seller isn't afraid to troll their own customers, even if that will get him banned from Ebay or Amazon. But at least Brittany didn't end up as disappointed as this next shopper.

She Got a Gender-Bending Plaid Shirt

An online shopper ordered a plaid dress, which looked cute on the website’s model. But when she opened the box, she discovered a man’s button-down plaid shirt. Maybe she can regift it to her dad. But have you ever purchased a TV stand that was too small to fit any television set in existence?

Next time Brenda Blancarte’s roommate orders a TV stand from Amazon, she’s going to make sure the word 'dollhouse' isn't written anywhere on the description.

This woman bought herself a Winnie the Pooh painted face mask for her beauty regimen. But the mask is so creepy, it probably went straight to the trash. Speaking of which, this next online fail is probably one of the worst things that can happen when online shopping.

Nicole Davies made sure to include special instructions for the delivery so that her mom wouldn’t know she was planning a surprise party for her. But the delivery instructions spoiled all the fun ahead of time. But she was not nearly as surprised as this next poor sap who bought what he thought was a new television.

This 3D TV Was a Total Joke

Shopping online is a huge gamble. Just ask this shopper who ordered a flat screen TV. But when he tore through the wrapping, all he found was a piece of wood where his TV should have been. This will make you think twice about spending your hard-earned money online. But the joke was on this next shopper who thought he was getting some drapes for his windows.

This guy thought he was buying regular-sized drapes that would cover his sliding door windows, but he obviously picked the first thing he saw online without checking. Boy, was he surprised when he tried to hang them up! At least some of these online shopping fails are the result of a misunderstanding, but this next purchase fail was purely intentional.

These Headphones Were Total Fakes

People put a lot of trust in online purchases, like this person who thought they had bought Tour brand headphones, which turned out to be regular earphones. But at least the seller had the decency to attach an apology note. Oh wait! It wasn’t much of one since the note informed the buyer that the left headphone doesn’t even work.

This Sharpie dupe is almost passable if you don’t look too closely. But, upon further inspection, it’s obvious that “Skerple” isn’t the brand most people know. Hopefully the pen still did it’s job, even if it’s trying to be something it’s not.